The weather was beautiful over the weekend, resulting in some really nice walks through the neighborhood, chatting with neighbors who were out to get some fresh air.  I made a pot of Vegetable Beef Soup on Sunday and invited Joann, Deb, and Elaine to join me for dinner. We met in the Library since none of us have room for seating more than two people. It was nice to have some good conversation and a piece of leftover Thanksgiving pie for dessert.
Ben and his entire family have been stuck at home with some type of crud. Norah wasn’t feeling well on Thursday and everyone kept their distance from her as much as we could.  Camille came down with it on Friday and the rest of the family on Saturday.
Posted by Bridge Coast to Coast Saga at 5:21 PM

Thanksgiving was a very nice day, starting with a phone conversation with Pat, then followed by Ron and Bob. There were also lots of Facebook and text messages with greetings from family and friends.
I got to Lois & Dennis’ house about 1:00 and had a nice chat with them before Ben and his family arrived.  Norah wasn’t feeling good (stuffy head, watery eyes, and feverish), so she was mostly wrapped up in a warm blanket but she did join in and we all had some fun playing Monopoly and learning about the various football plays from Jill and Dennis.  I brought an Antipasto platter with meats, cheeses, apricots, and roasted peppers.  Dinner was excellent followed by the Quinn family’s special green dessert and pumpkin or pecan pies. 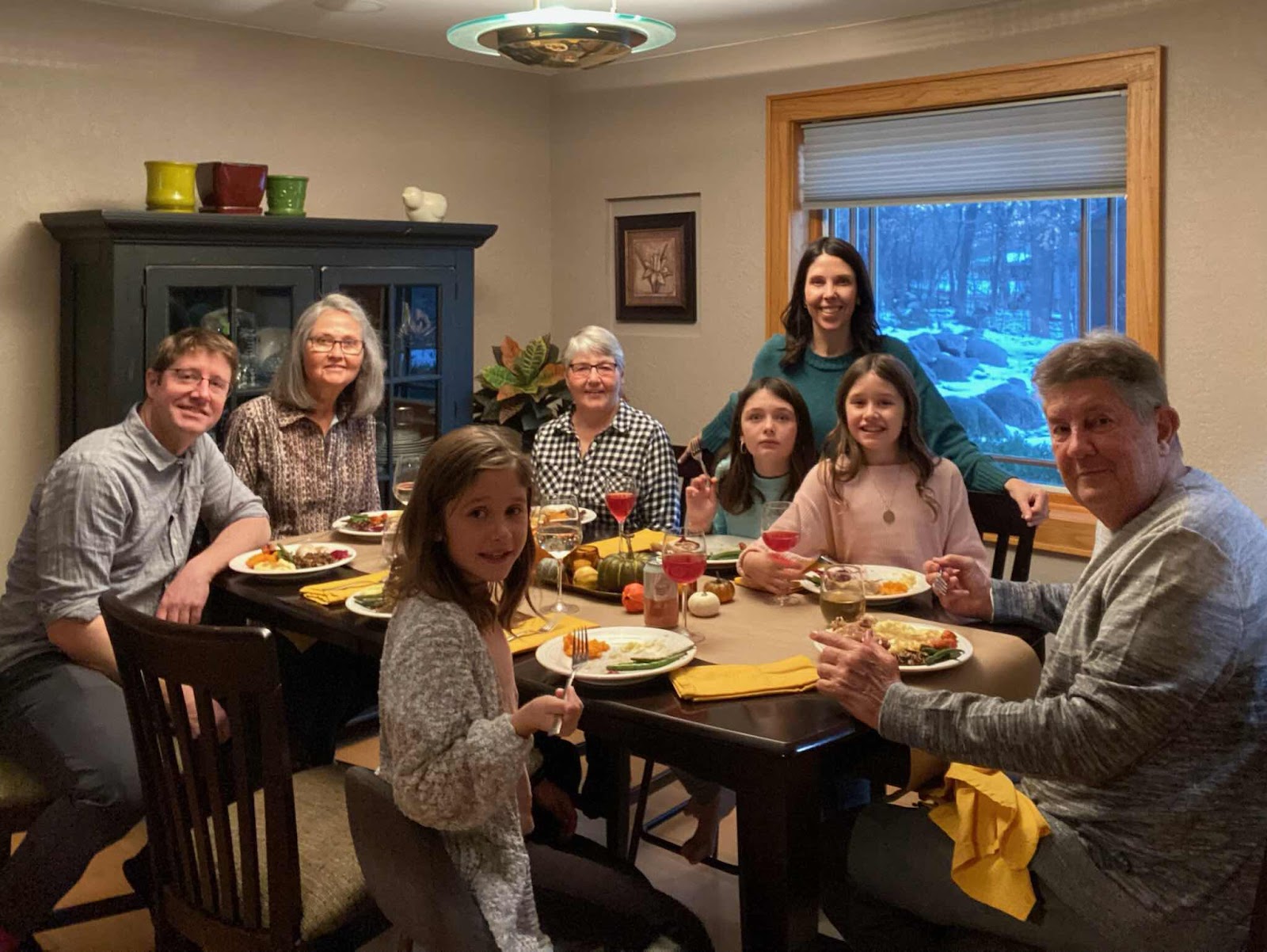 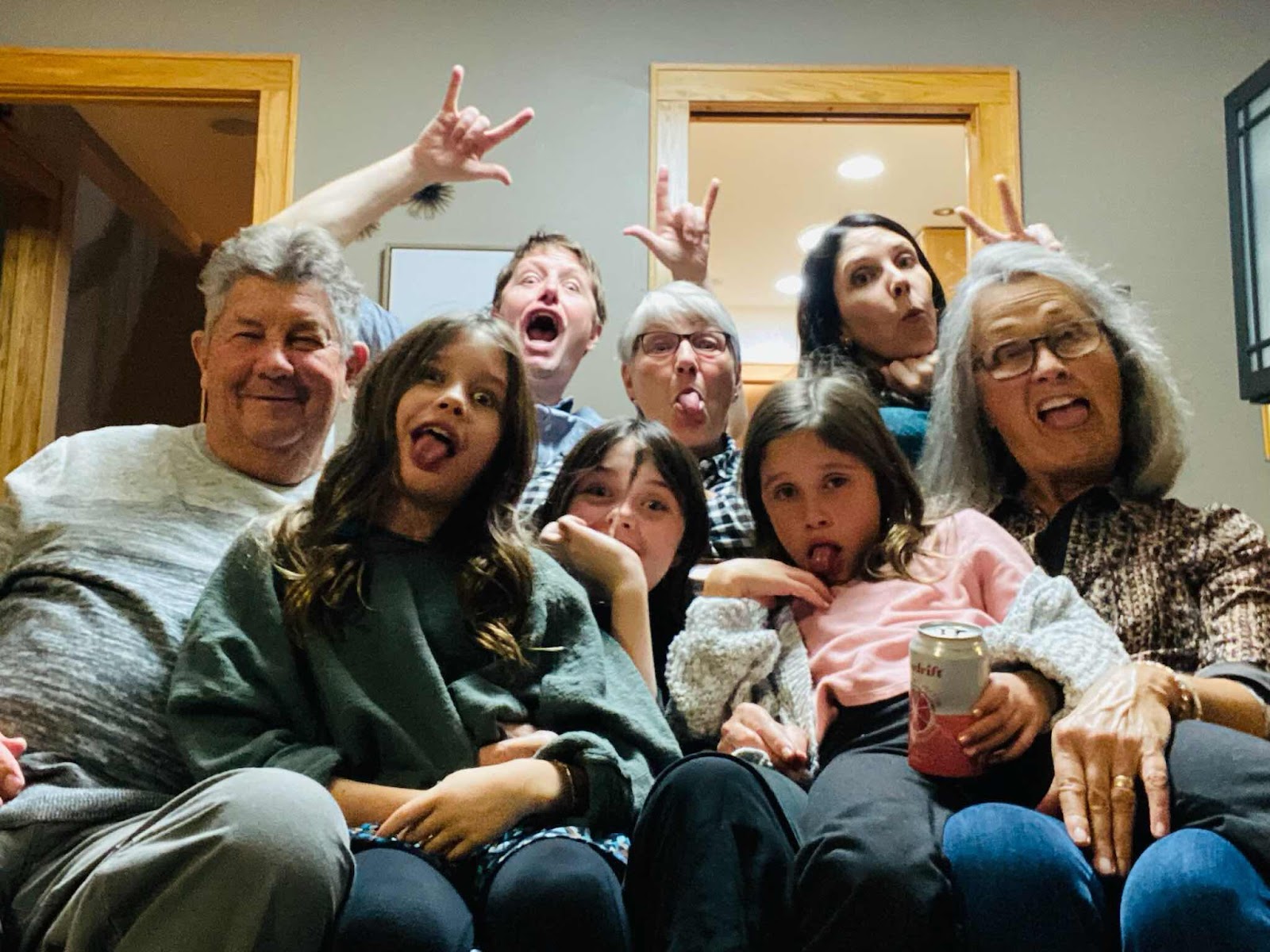 And This Topped Off The Day 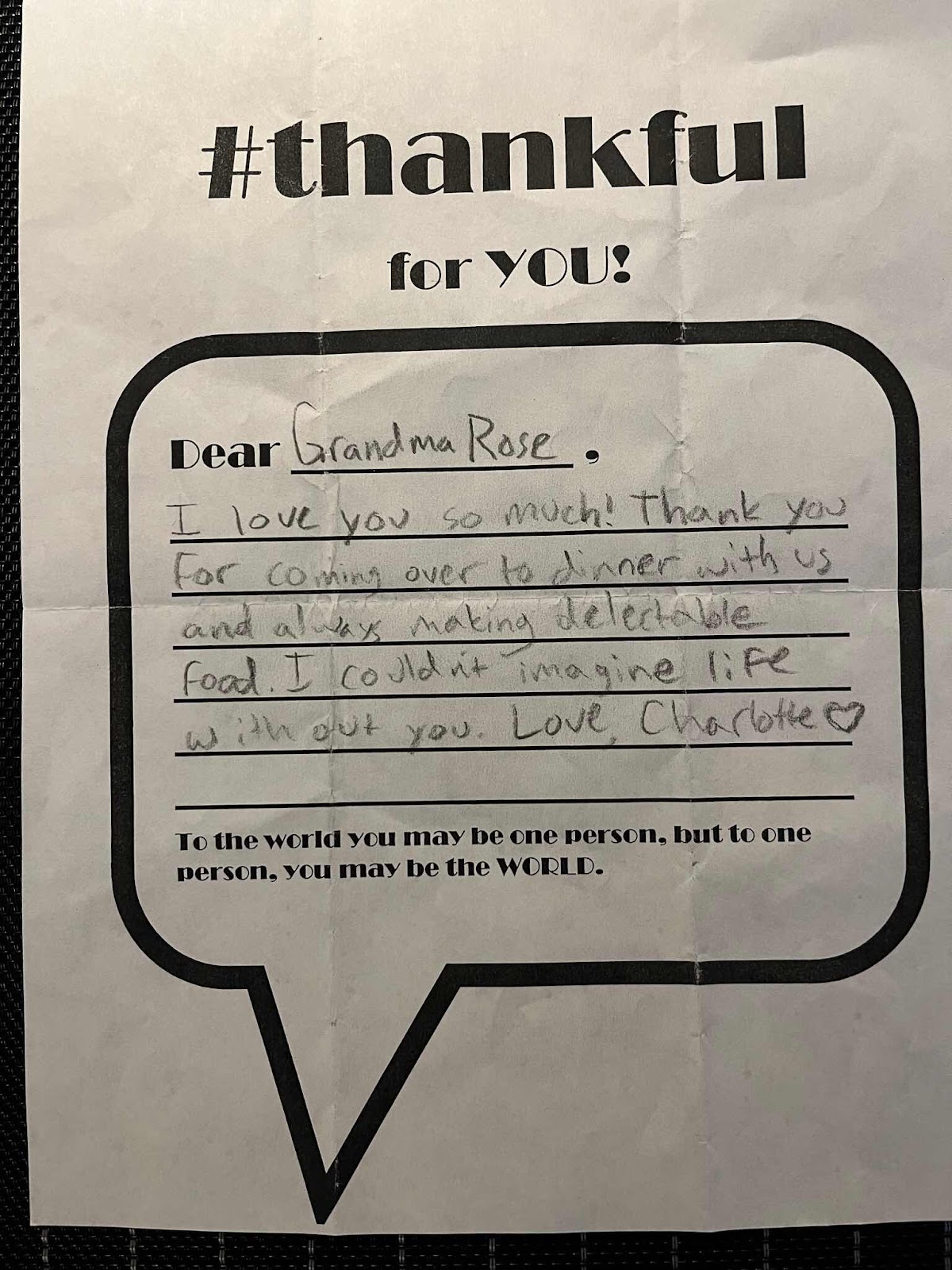 Posted by Bridge Coast to Coast Saga at 10:47 AM

The Manager and staff at Penelope made Thanksgiving dinner for all of the residents yesterday, some residents brought side dishes, and many showed up to enjoy a delicious dinner.  I volunteered to deliver dinners to residents who couldn’t come to the community room in my building - there were about eight who wanted deliveries.  This was because the elevator in my building has been out for almost two weeks and is not expected to be repaired until November 30, as they have been waiting for parts.  This has been a long haul for several of our residents who walk with walkers or in electric chairs, but staff and other residents have been helpful with hauling groceries or helping with laundry.
I’ve been taking Joey to the dog park pretty frequently and he is sure enjoying it.  Today, he met Ruby, a Poodle/Cavalier King Charles Spaniel puppy who really thought it was fun for him to chase her constantly. Later on, he was right in the middle of about 8 bigger dogs, mostly pups, and he was having a blast.
I was a little concerned today about a pit Bull that we have seen a couple of times now. It is behind the fence in the larger dog area, but has targeted Joey (stood there watching him for most of the time we were there today) and has even pushed against the fence as if he wanted to break through.  Joey has had fun running along the fence with him, but it makes me nervous after seeing him push against the fence. I will have to be cautious when I go.
Posted by Bridge Coast to Coast Saga at 4:11 PM

I’m going to write about the highlight of my weekend first, as I have this really good feeling right now.  Ben and I decided to make a trip to Stoughton this weekend to see Pat and Tracey and Charlotte came along. It was a whirlwind of a long drive but so worth it and it gave Ben and I some great one-on-one time. It has been four years since my boys have been together although they stay connected by talking on the phone frequently.  Ben’s life is very full with his family and Pat recovers from his very physical job on the weekend and just doesn’t like to leave home much, so this trip means so much to me.
My neighbor, Deb, was willing to dog sit for me and that made it so much easier.  All went well with those two.
Ben and Charlotte picked me up about 8:30 on a frigid (18°) Saturday morning and we hit a few spots along the route where we had blowing snow and there was a strong wind, but not too bad.  It was a long, 5-hour drive with a few stops along the way, lots of snacks, and Charlotte read one of her books three times. We went straight to Pat’s house and just talked and talked and Charlotte and Tracey played some video games (probably Charlotte’s highlight) of the evening and we went to Wendigo for dinner. Dang, it was a cold and miserable night weatherwise, but there was a lot of warmth surrounding us.  Charlotte took this picture at the restaurant. 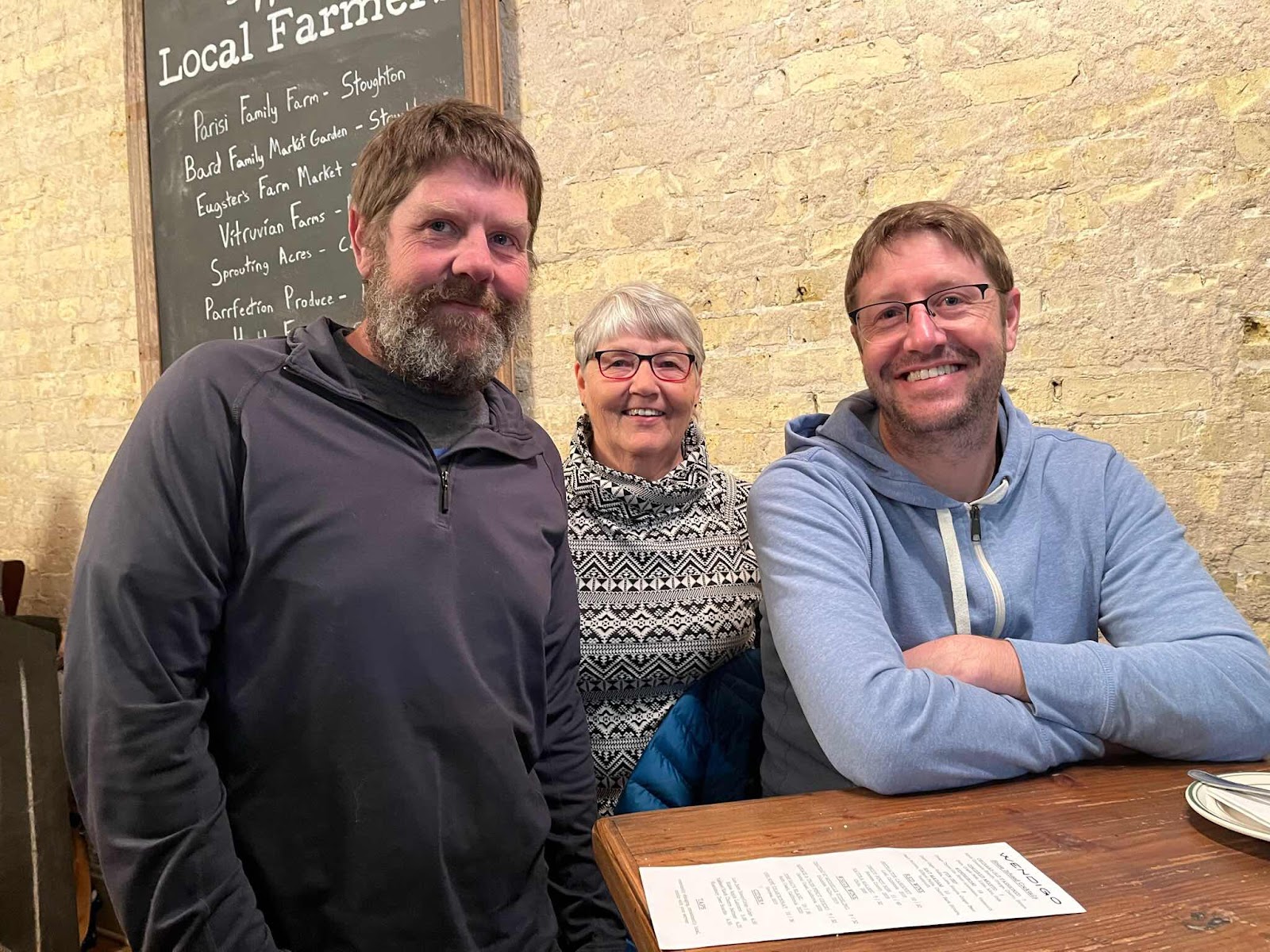 After a stop at Fosdal’s Bakery on Sunday morning and a couple of hours with Pat and Tracey, we made a quick stop to drop off a gift that I had for Susan (she starts her chemotherapy treat on Friday) and we had a short and sweet chat with her.  And then for the long drive back home, with only one break at a rest area on the Minnesota state line and a stop at Andele Taqueria for yummy burritos before getting back home. All in all, it was a very nice trip.
Last Friday was kind of a fun day, as Judy and I went to the Masonic Home for their annual Holiday Bazaar and saw some really nice crafts and some of the old standards too.  My favorites were the cowl scarves and mittens made from beautiful recycled Merino wool sweaters.  From there we went to an Estate Sale and to the Touch of Home Consignment shop - a very nice shopping experience. I didn’t buy anything but I sure enjoyed the looking.
Earlier in the week, Mother Nature dropped about 4.5” of snow over a period of 4-5 days and our temps dropped to below average - in the 20s.  I had to pull out the bin under the bed that had my warm winter jackets and boots in it. It make it so much harder to handle when it comes on fast and furious after a long period of really mild weather.
I took this cute picture of Joey they other day. 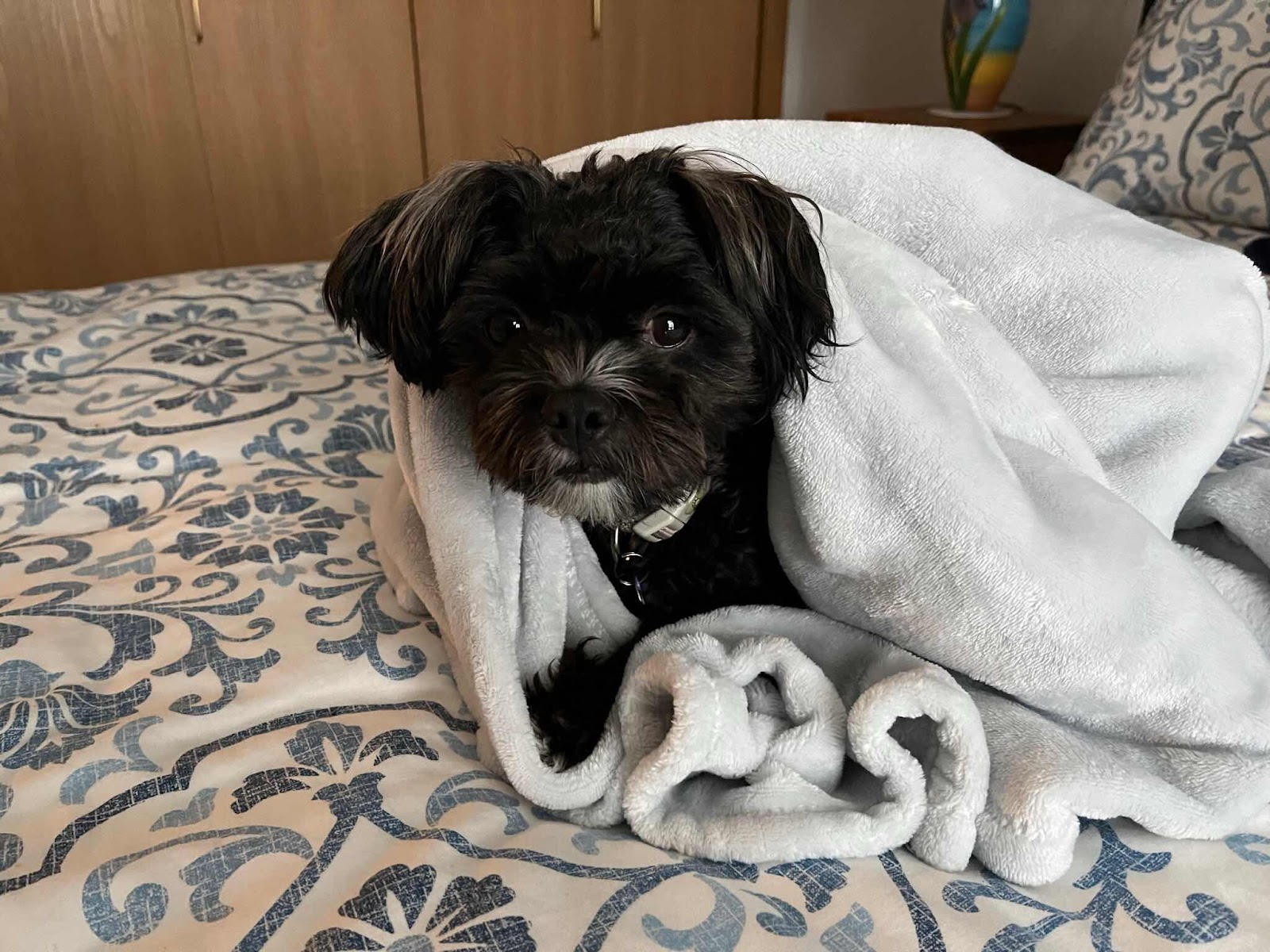 Posted by Bridge Coast to Coast Saga at 7:23 AM

I just finished giving Joey a haircut and he sure is a good boy about it, although he doesn’t want his face or feet touched but we got it done.  It only took about 45 minutes today, so we are improving on the process every time we do it and he isn’t quite as anxious about it.
When I look back at how easy it was to have Frisco as a roommate, Joey is at the other end of the spectrum.  He is still very demanding and I’m not 100% sure of what he is asking for, although I think it is usually food related, he will usually settle for some games of fetch with the ball or his toys as a distraction.  He will play for a long time before tiring. He has improved in so many ways and we are learning together every day.  Another thing - he is ready to go out for his final potty break around 7:00 pm and then is ready for bed - and is perfectly content to be in his crate.  He is a weird little guy who makes me laugh a lot and I often question what his life was like before me.
I met the girls after school two nights this week after school. They are so good about emptying their lunch boxes, putting the containers in the dishwasher, having a snack and then getting at their homework.  I took Charlotte to swim practice Tuesday evening and the routine is a bit more demanding than her last swim team - 1.5 hours at least 3 times a week.  I went back there on Thursday to clean the house.  Ben has been out of town and Jill was not working from home that day, so there were no distractions - it’s not like that makes any difference, as when they are at home, they are busy working.  The job took about the same amount of time and when I got back home, I checked my health statistics and learned that I was on my feet for 5.5 hours, climbed 16 flights of stairs, and put in 12,625 steps.  No wonder a long, hot bath feels so good when I get back home.
Our weather has turned and winter is here. We dropped from 68° on Thursday to 38° on Wednesday and we aren’t supposed to get above 35° for the next two weeks.  A few flurries came down today but there was no accumulation.  Our walk wasn’t too bad and Joey still hasn’t shown any signs of needing a jacket.
I watched the last episode of “From Scratch”, a Netflix series that is a tear jerking love story about a Sicilian chef and his American wife.  It was a touching, but sad story and I had to grab tissues a few times.
Posted by Bridge Coast to Coast Saga at 10:52 AM

The fire alarms went off in my building last night at 2:30 am. After fumbling around and grabbing Joey, my phone, decent shoes, and a warm coat, I headed out to the meeting place on our property. There were seven residents out there, another 12-15 hanging out around the front entrance and that left another 20 or so who didn’t leave their unit.  The fire department arrived and after about 20 minutes they let folks back in to go to their units, telling us that the problem was an elevator belt that overheated.  There is a lingering odor that reminds me of burnt rubber or plastic. 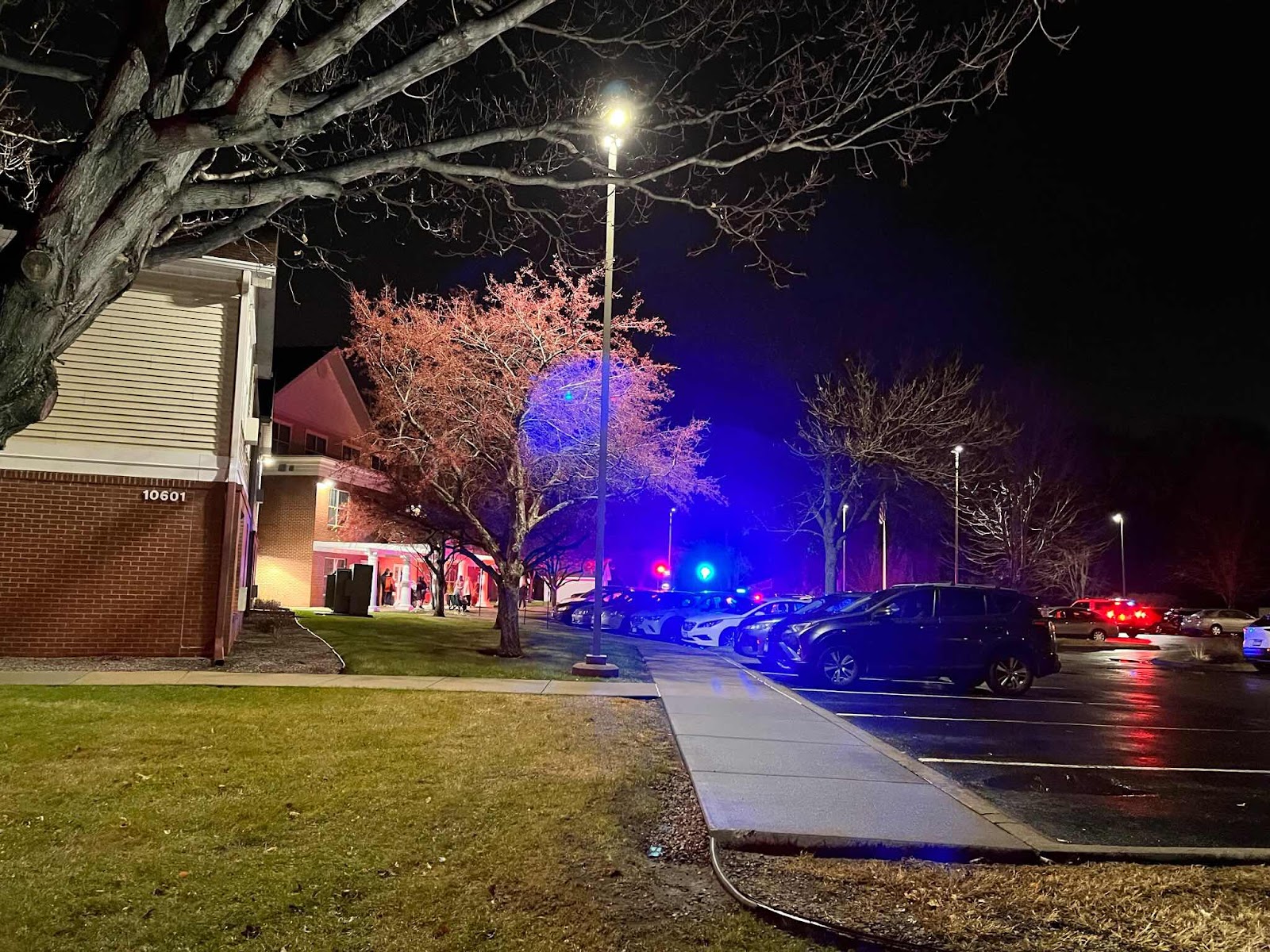 Posted by Bridge Coast to Coast Saga at 4:32 PM

It’s been a busy Tuesday.  I offered to take residents needing a ride to the polls today and not had one taker, so we headed out at 10:00 and I ended up waiting for her for about 40 minutes it turns out that the person she was registering with wouldn’t accept her ID, so another guy helped out and she made it through.  I hear about this and really question how there could ever be rampant voter fraud.
There was rain in the forecast but it hadn’t started yet, so I loaded Joey into the car and we headed to the dog park where he was able to burn some energy and run like the wind.  And then we had some time for me to finish the latest book that I was reading, “The Great Alone” by Kristin Hannah x a story about a very dysfunctional family that moves to Alaska with the hopes that Dad’s PTSD gets better.  It was a sad, but very good story about starting from scratch in Alaska.
Today was the monthly art class with Genevieve and we did ‘painting with wool’ or needle felting.  It was a great medium to work with; soft, beautiful colors, and something I have never done before.  This is the outcome, although I will be making a few tweaks.  The classes are so much fun and I love learning new things. 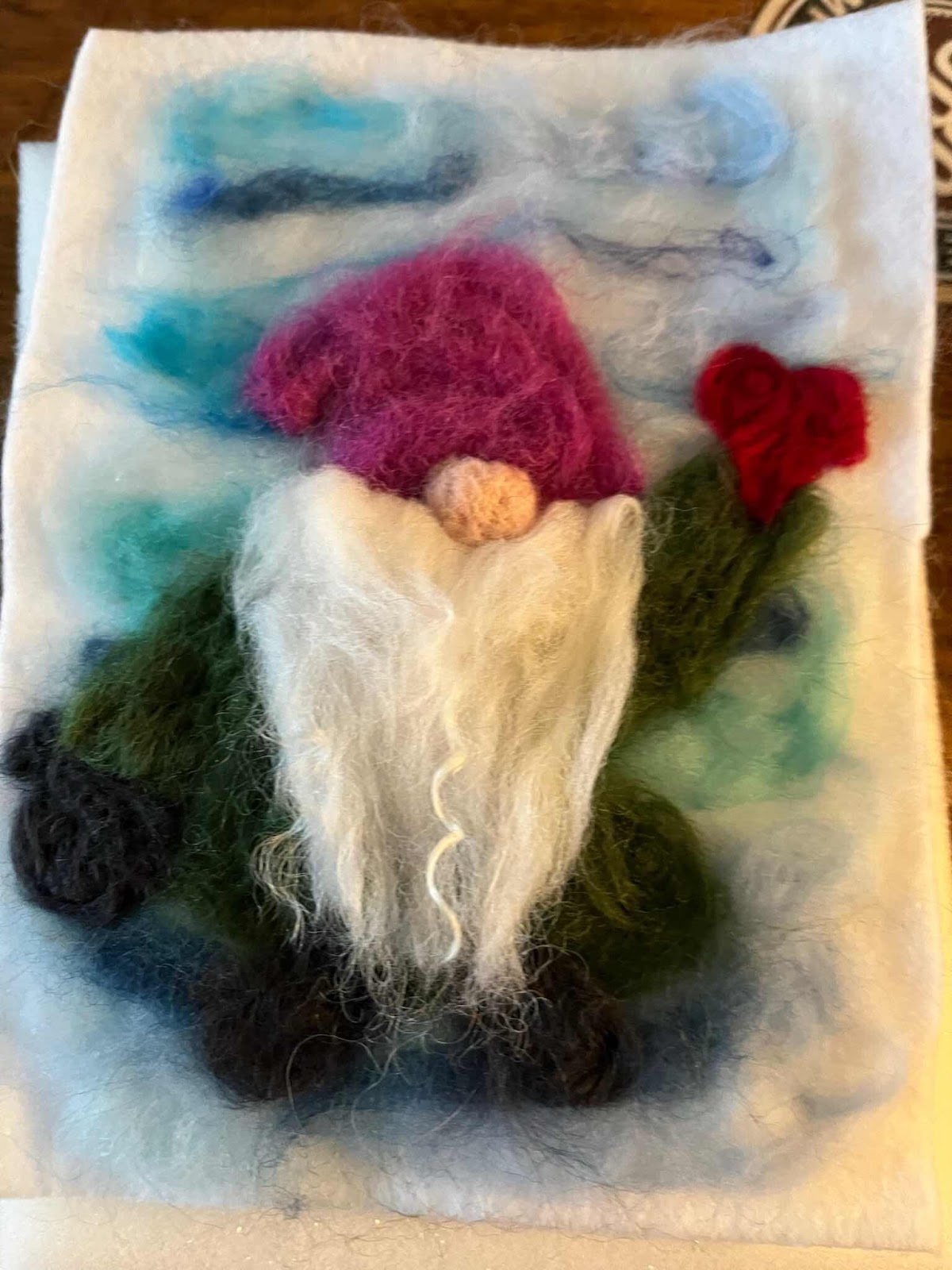 I had to leave a bit early in order to do my usual Tuesday after school pickup with the girls.  It feels so good when they get excited to see me.
Posted by Bridge Coast to Coast Saga at 6:29 PM