We are finally seeing temps in the 70s and it sure feels good. I actually changed into knee length pants and short sleeves for my walk today. Frisco and I ended up getting 2 miles in and I stopped to get some photos of spring flora along the way. The sweet smells of lilac and flowering crab are everywhere - and yes, my allergies have also flared. 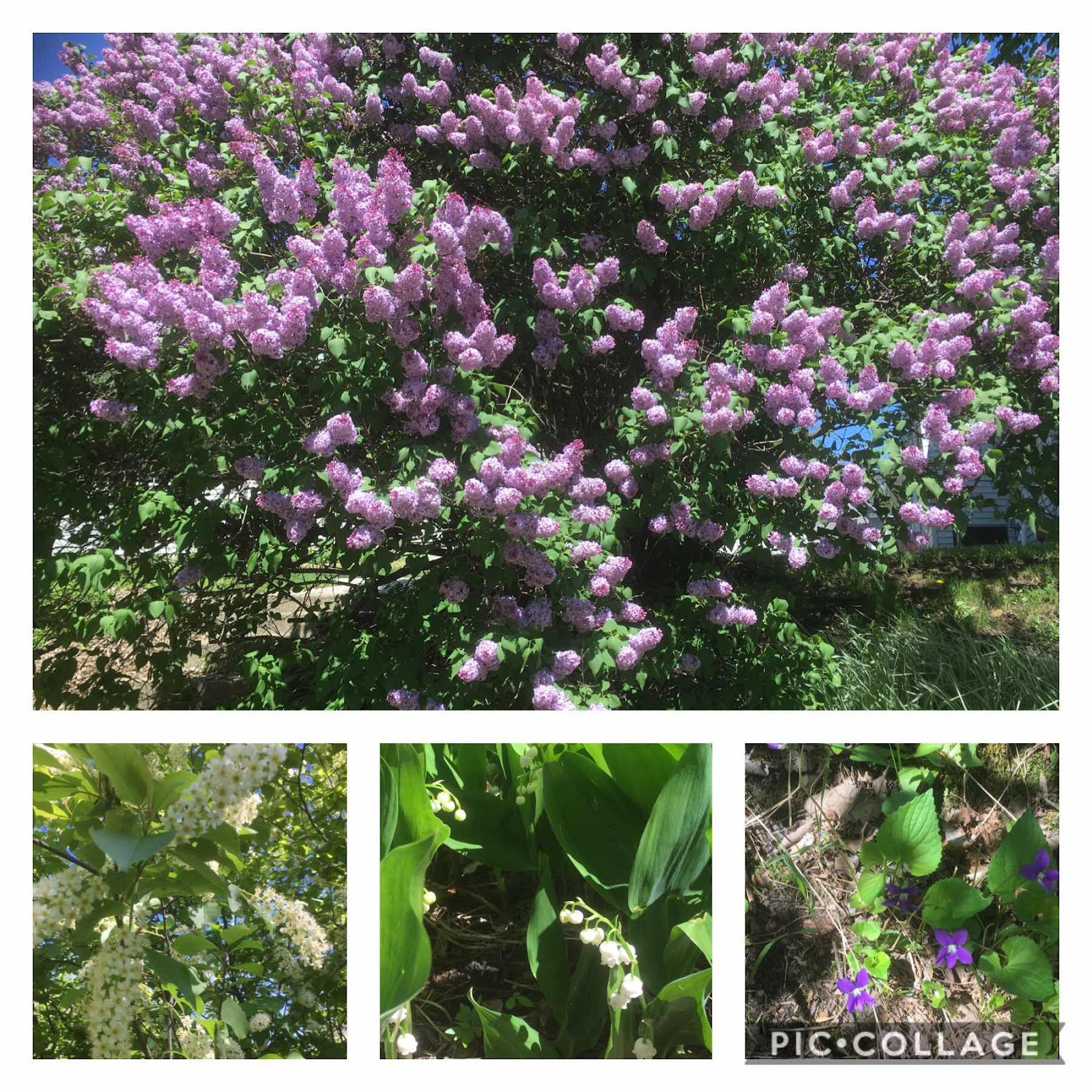 I arranged to meet up with Ben after work so we could take a walk together. Because of home schooling, he doesn’t finish working until 7:30-8 pm. I hung out with Jill and the kids for a while and we all had Strawberry-Rhubarb crisp that Camille made (with a little help from Mom). She even found and chose the recipe online and insisted on serving. It was very tasty.
These are the ‘Super Doppler Rollerblader Girls’ out for an adventure. 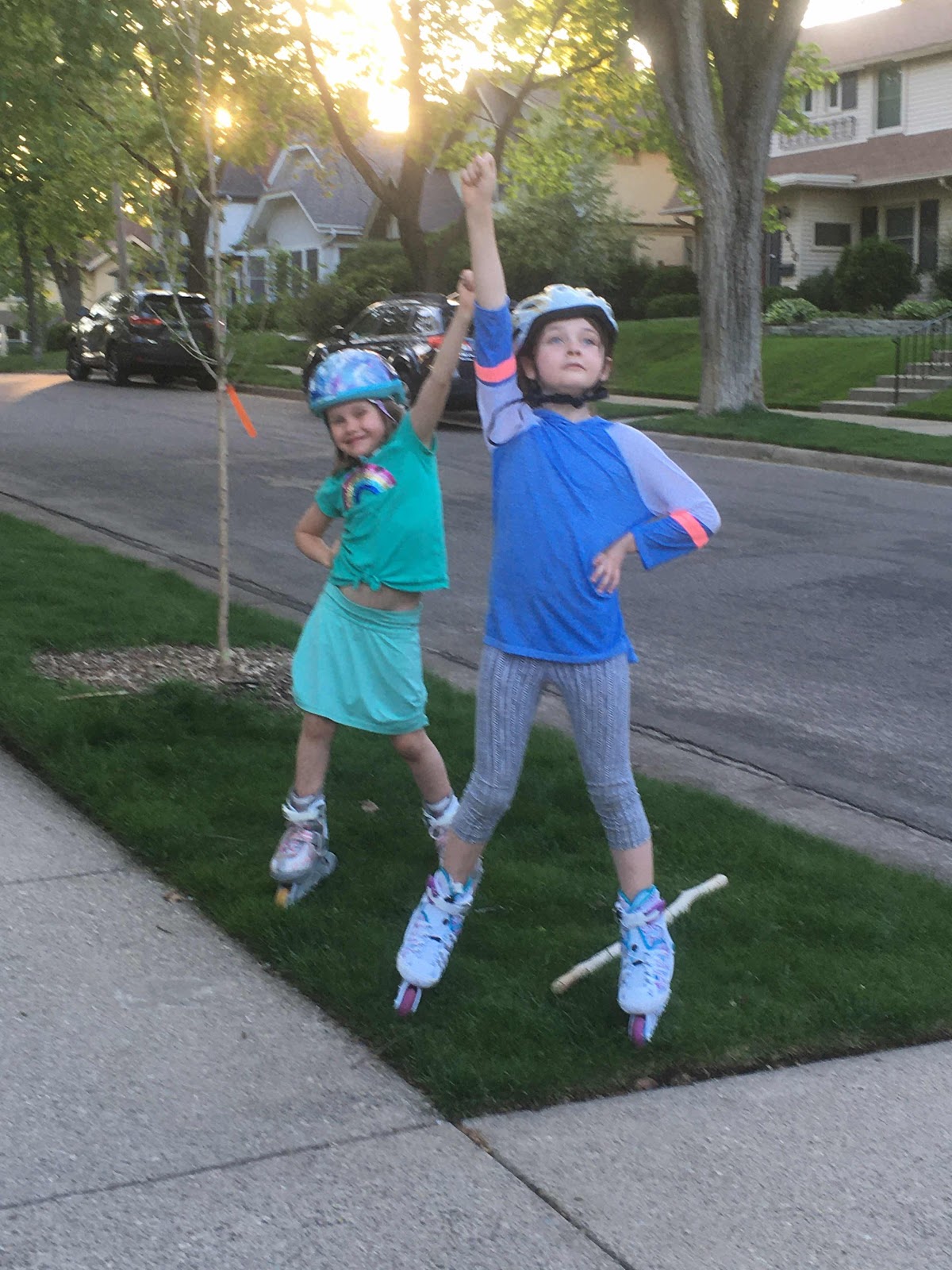 Ben and I had a very nice 2-mile walk (that makes 4-miles and 12,000+ steps for me today) and lots of talk along with it.  We will have to do that more often and maybe even take the girls for a walk instead of video time in the afternoon.

Posted by Bridge Coast to Coast Saga at 6:38 AM

It’s been almost a week again - without a lot to write about.
We got some much needed rain over the weekend - Saturday, just enough to need a raincoat but not get soaked. Sunday was steady and we got almost 4 inches throughout the day. I got soaked on my first walk with Frisco and got smart and wore my waterproof hiking shoes, rain pants and raincoat on the other walks so I stayed dry by my outerwear sure got soaked. I am thankful that I had it.
Tom started on his road trip with the hopes of arriving here next Saturday or Sunday. He is taking a detour to visit his sister Geri in Blythe, CA, then Joyce in Falcon, CO and is hoping to arrive here by Saturday or Sunday.
I found another one if these engraved sidewalk blocks on my walk today. I find them interesting and feel good when I spot one. 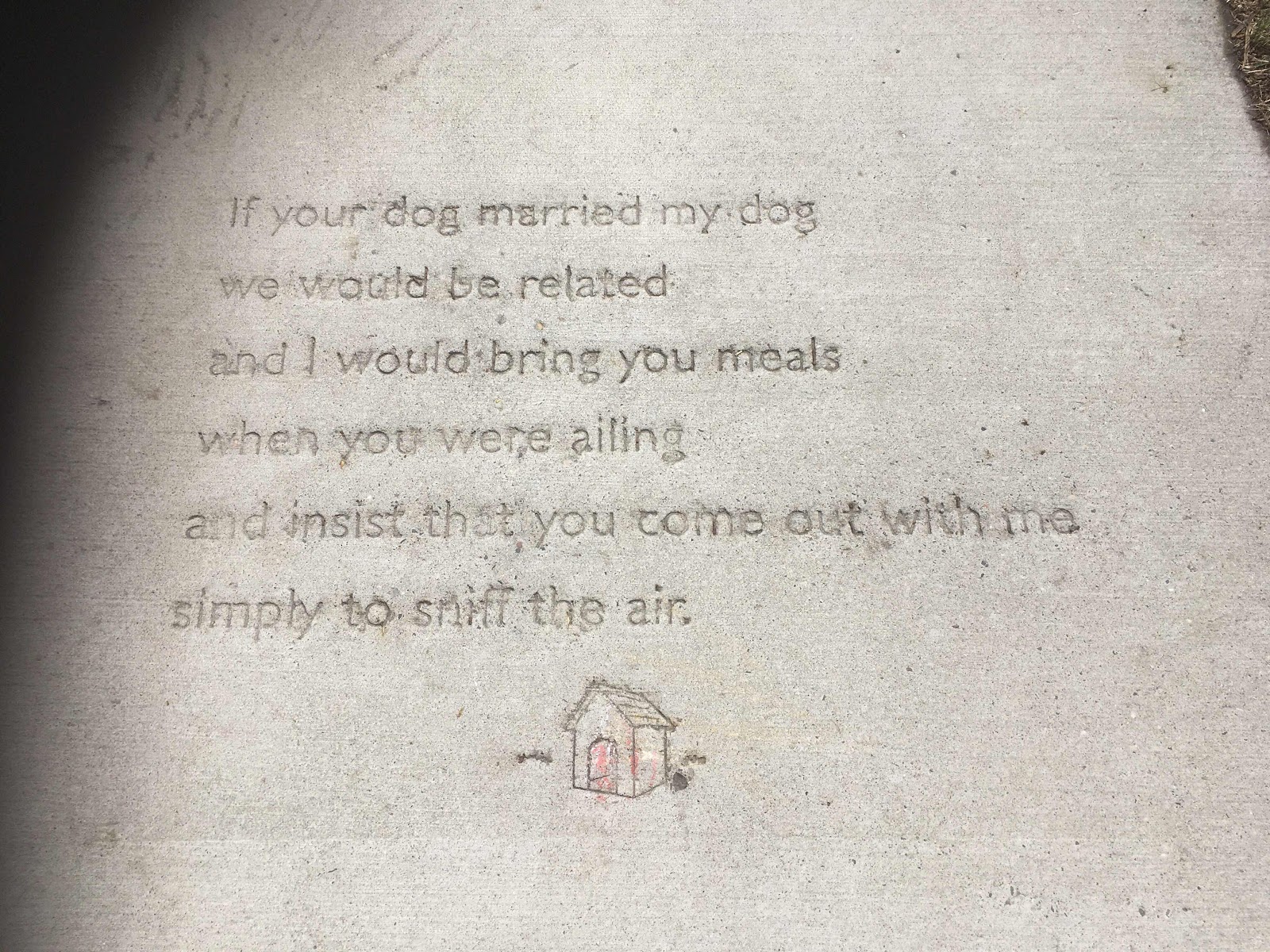 Posted by Bridge Coast to Coast Saga at 7:01 PM

Mother’s Day started with a call from Pat and Tracey and lots of texts from family and friends.  The weather has been cool and wet but we managed to have a family gathering on Sunday to celebrate Mother’s Day at Lois and Dennis’ house again.  We started by taking a long walk on the trails through their neighborhood, then hung out around the fire pit with a good fire burning.  The kids were busy playing yard games and I pitched the ball to them and they each got 3 hits before passing the bat.
Dennis made steak and pepper burritos for dinner and we roasted marshmallows and had some mores for dessert. All in all it was a very nice day in spite of the weather. 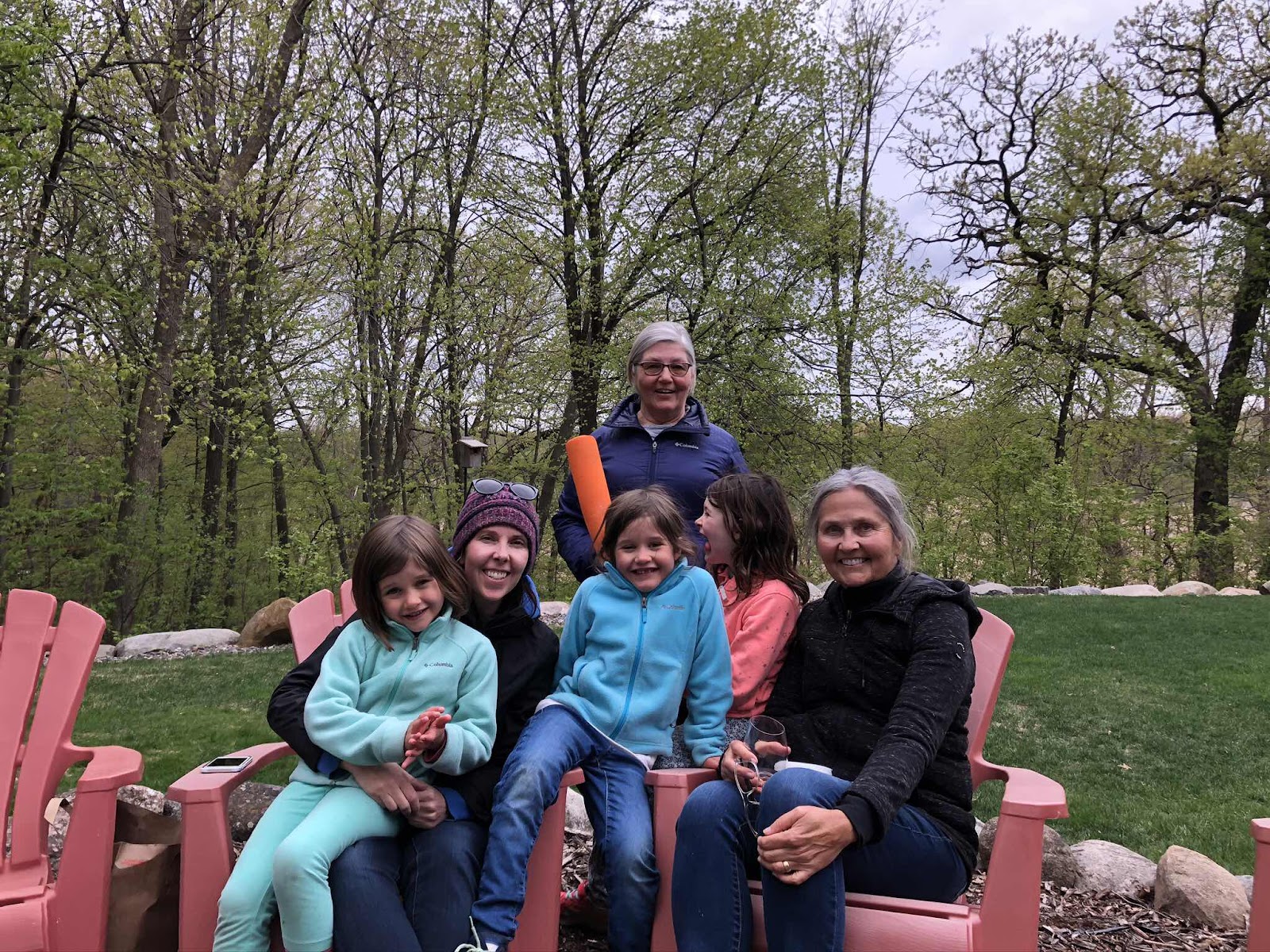 Posted by Bridge Coast to Coast Saga at 6:24 PM

This week’s highlight - I got to visit with Marta and Kerry, friends from Washington who were passing through and stopped for a visit.  They are long time RVers that I met when Mike and I stayed at Marin RV, just north of the Golden Gate Bridge in Greenbrae, CA. Kerry was working at the Maritime Museum in SF and Mike and I were babysitting Charlotte a few days a week for a few about 6 months. Marta and I became quick friends and would go on long hiking adventures to places like the Marin Headlands, and other beautiful spots. I will never forget our trip to Maritime Museum’s warehouse where we were given a guided tour of artifacts that were in storage or being repaired for the museum, followed by a great dinner and beers. That was the point where we hit it off as couples but then Mike and I left there shortly after. After Kerry retired, they went back to Washington to be near their family.
Marta and I have stayed in touch through the years, thanks to Facebook, and I feel fortunate that they took the time for a visit with me.  We last saw each other in 2014 and just missed connecting last spring when Tom and I were in Washington.  We had a nice, distanced visit, some lunch, and a walk along the river. Unfortunately, Marta’s health is not so great as she suffers from Fibromyalgia in her legs and was recently  diagnosed with Alzheimer’s Dementia. She seemed like the same old Marta to me, but after a couple of hours she struggled to remember things and Kerry helped her out a lot and filled in the blanks. She is fortunate to have a good man by her side who is willing to do whatever he can to care for her and to keep her happy. After her diagnosis, they were considering an end to their travels but it is something that she loves and it keeps her brain active, so they will continue for as long as they can.
Posted by Bridge Coast to Coast Saga at 8:46 AM 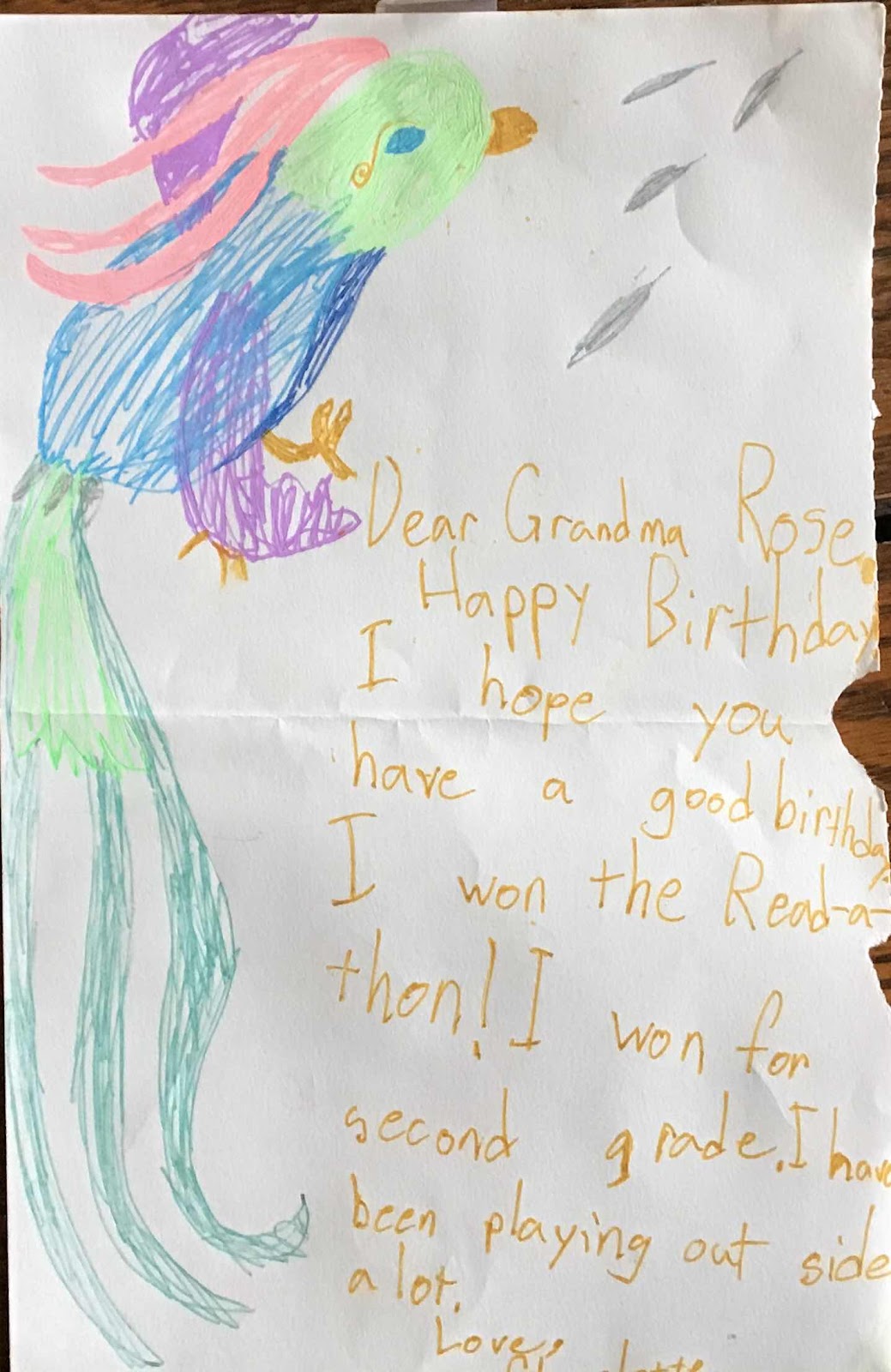 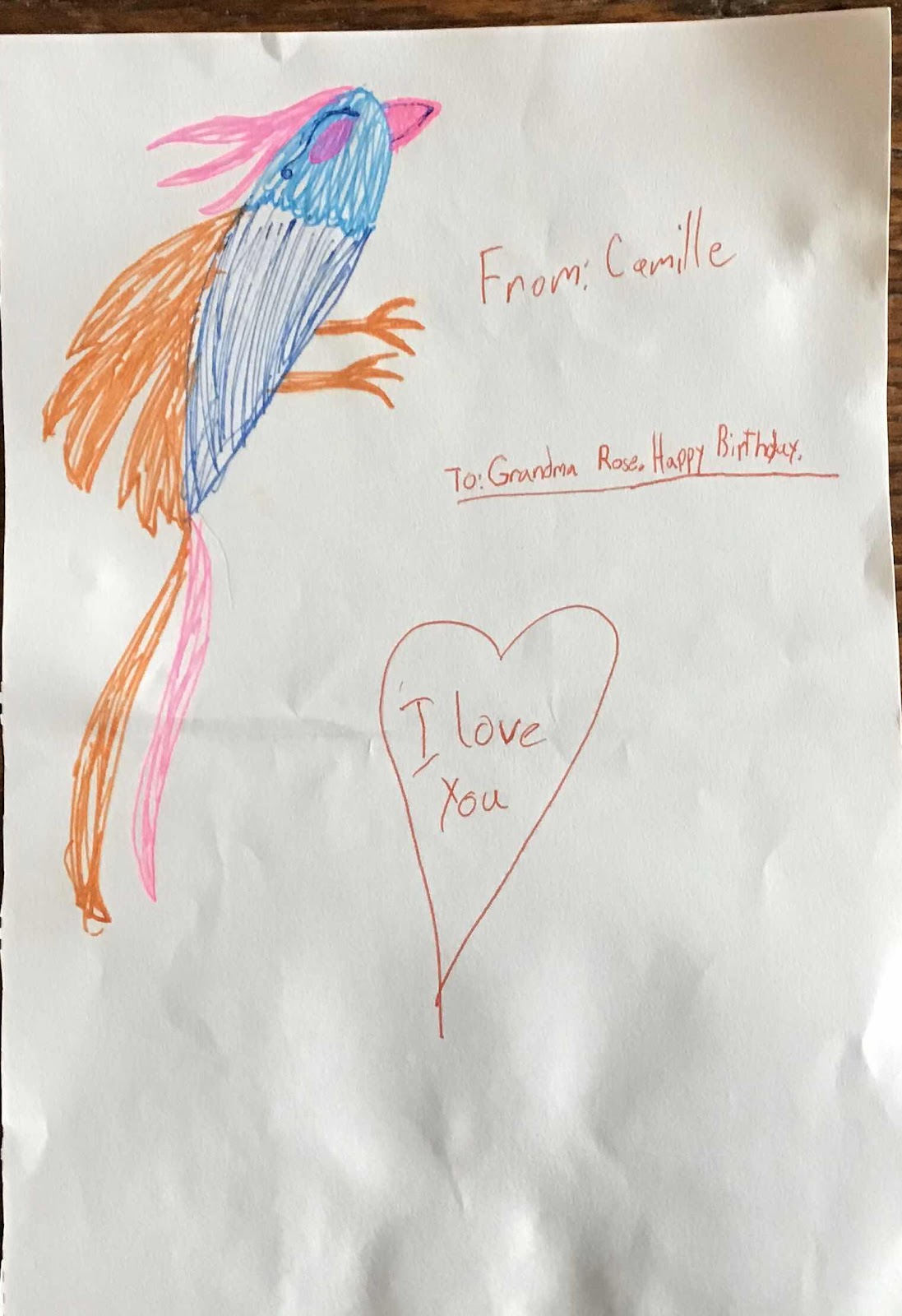 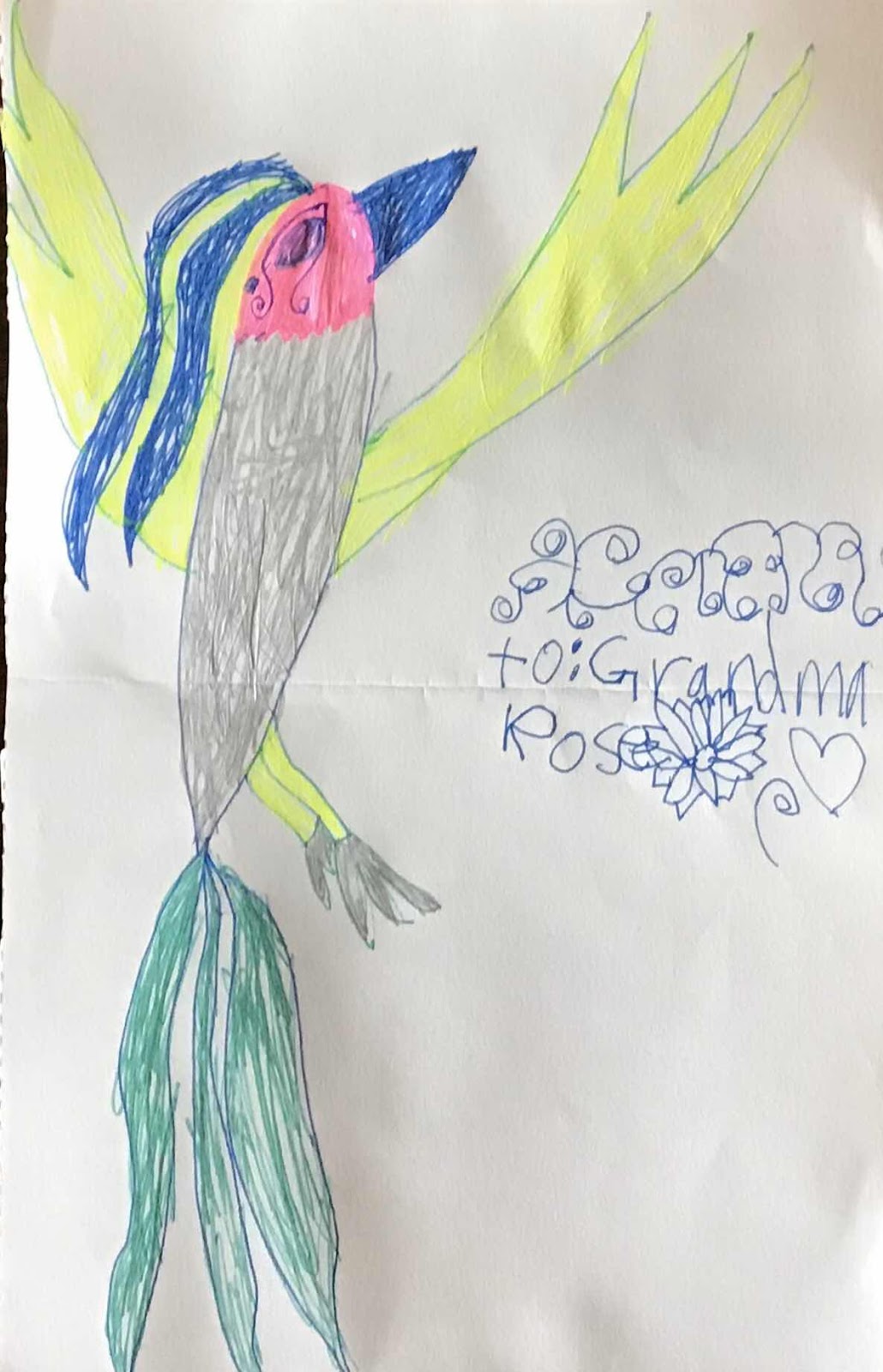 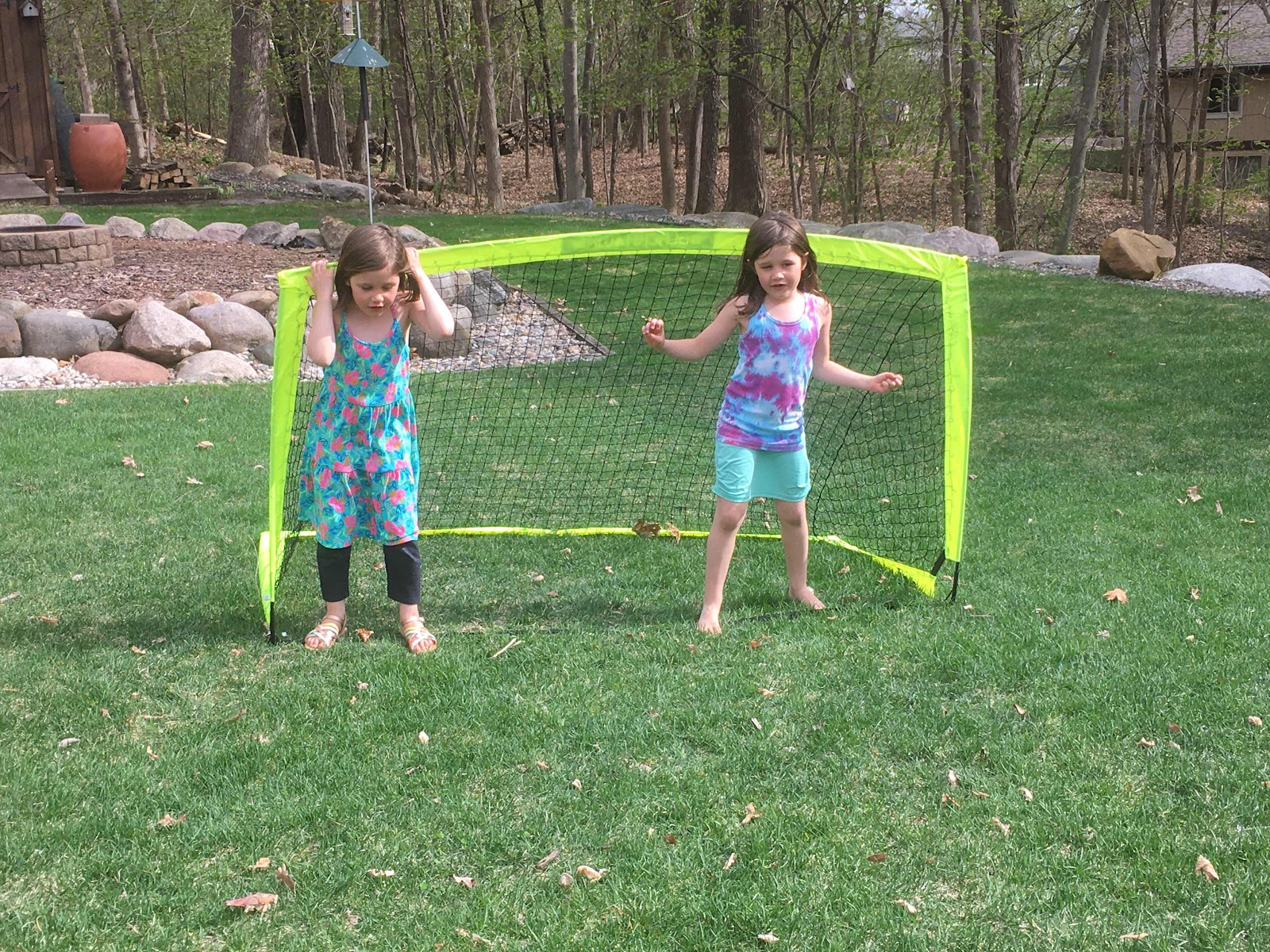 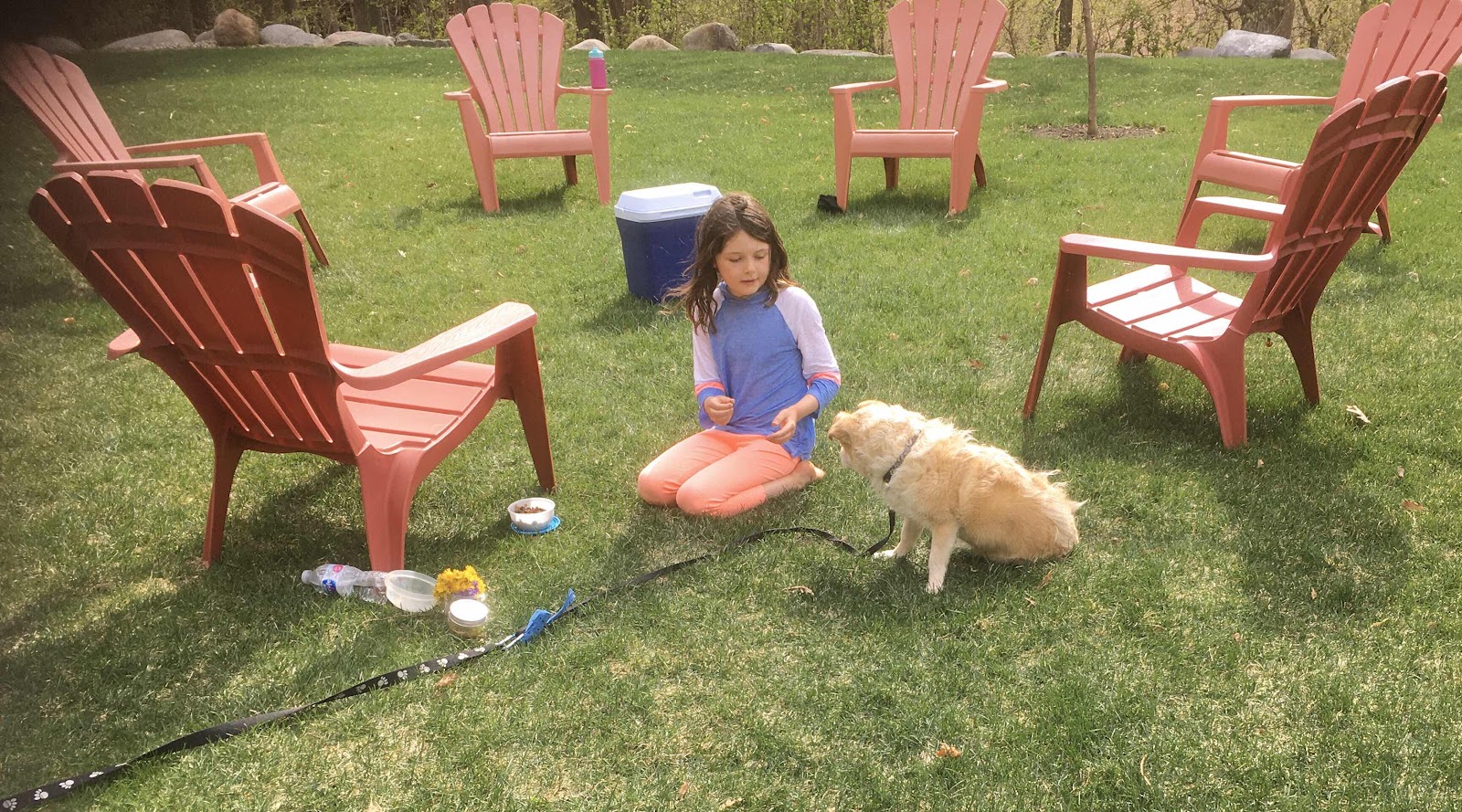 I celebrated my 72nd birthday on Monday and it was filled with snail mail cards (3 from Tom over the last few days), text messages, phone calls, video calls, and Facebook wishes from family and friends. It was also a beautiful, sunny 70 degrees and I was able to get a nice walk along the Mississippi River trail. I felt loved and enjoyed the day. 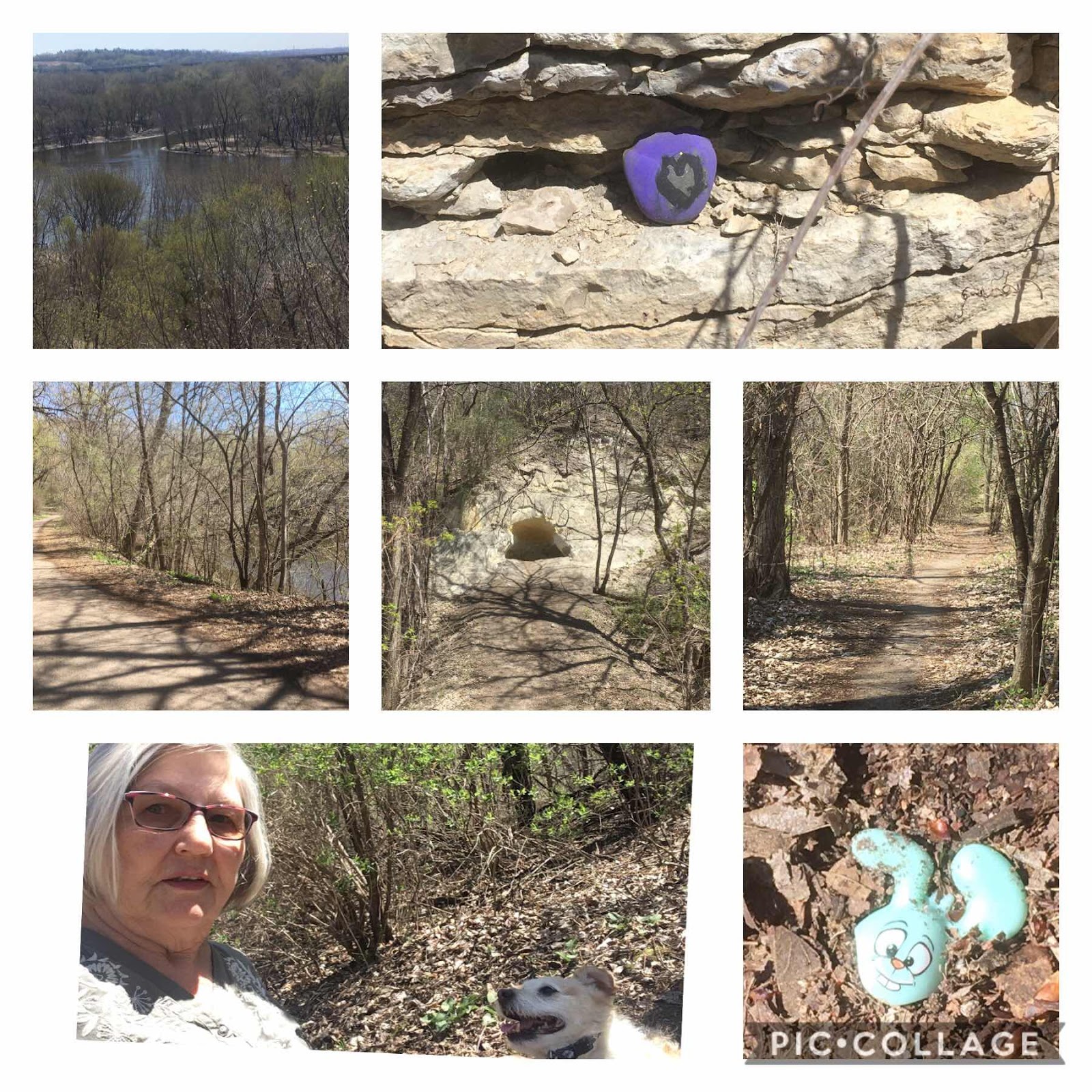 I just have to write about my Senior dog, Frisco, since he is giving me the stare-down right now, and I know exactly what he is trying to say - he is wanting to go out for his 8pm potty walk so he can settle in for the night. I don’t know his exact date of birth, but since we were told that he was 2 1/2 years old in October of 2007, he would have been born about April of 2004, so we celebrate our birthdays together in April.  That means that he is 16 human years old and about 80 dog years for his age and weight.  His coloring gets lighter and lighter, especially around his face.  Yet, he really hasn’t slowed down too much and still can trot right along on a 2+ mile walk.  He has become much more demanding in his old age - especially at 7 am and 8 pm. Those are the most important times in his day - his first and last potty walks of the day.  He has always like to hang out in corners - where he can keep a close eye on me - and that seems to have increased lately. I now have to coax him to come up and sit with me on the couch or to snuggle with me on the bed before going to sleep at night or when taking a nap. Oh, well, we are aging together and I sure do appreciate his company.
Today, our country has exceeded the number of people that we lost fighting the Vietnam war, more than 58,000 people have now died from COVID-19 since late February and over a million have gotten the virus. The sad thing is that these numbers aren’t accurate and are under the actual cases and deaths since many have suffered at home or died but were never diagnosed. We still don’t have enough supplies to protect the nurses and doctors that are in contact with sick patients. They are having to adapt and reuse supples that were designed for a single use. We are not getting those products from China any longer and the US can’t produce them fast enough.
Earlier this week, our poor excuse for a President suggested to his medical advisors, at his daily press briefing, that we should investigate the use of light, bleach and sanitizers in the human body to kill the virus - since they work on surfaces instantly. Since then, the manufacturers of Clorox, Lysol, and other household cleaners have been putting warnings to people not to ingest or inject any of those products. There are no words to describe the stupidity.
Posted by Bridge Coast to Coast Saga at 6:07 PM

Happy Birthday to my Brother-in-Law, Dennis!
The last 2 days have been gorgeous with temps peaking around 70 degrees. I have finally been outdoors without an added layer to keep me warm. Others around here are dressed in shorts and have been since the snow melted. I guess I haven’t acclimated completely yet, but I won’t be wearing less than long pants and sleeves for a while yet.
I discovered a lovely trail that is part of the National River and Recreation area along the Mississippi River that is easy to access from my house and gives me a 2-mile walk. It is nice to watch the gradual greening up at ground and tree level, it’s only going to get better.
This afternoon on a FaceTime conversation with Ben, I learned that Charlotte is the second place winner in her school’s Readathon. The first place winner - the same person who has won the last 3 years, relinquished her prize to the 2nd place winter and the prize is a bike and helmet from a local bike store and she will get to choose her bike. WOW! Am I a proud Grandmother after hearing this news! 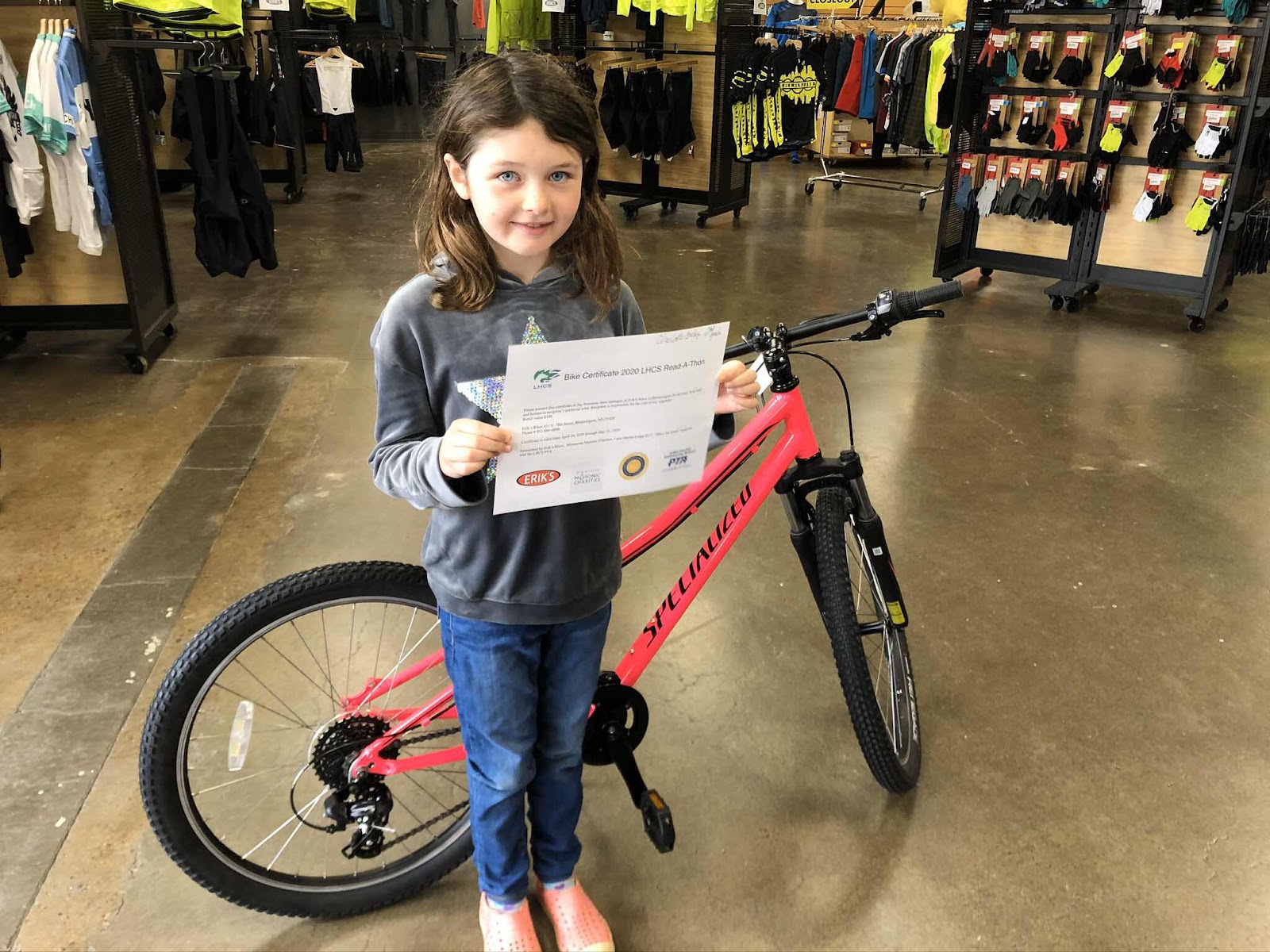 Posted by Bridge Coast to Coast Saga at 7:05 AM