We had a great afternoon biking the Brown’s Creek State Trail and the Loop Trail out of Stillwater. The best thing about it was the rented E-bikes from Mike’s Rentals: 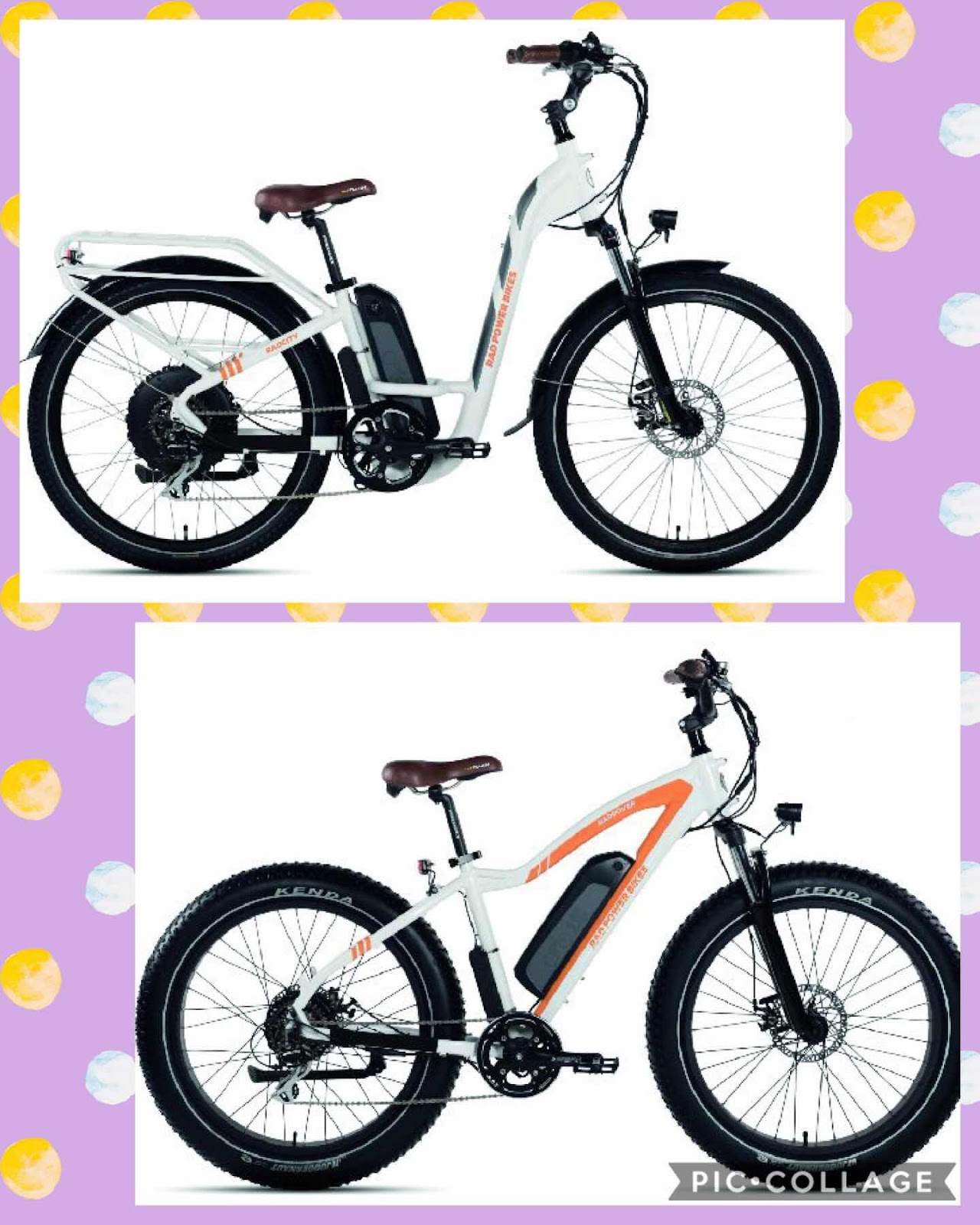 Not only did these bikes have continuous assist while pedaling, they had different levels of assist for hills and they also had a pedal to help you off to a quick start after a stop, before you could catch up with the pedaling. We chose a great day, as last night’s rains cooled things down a bit. 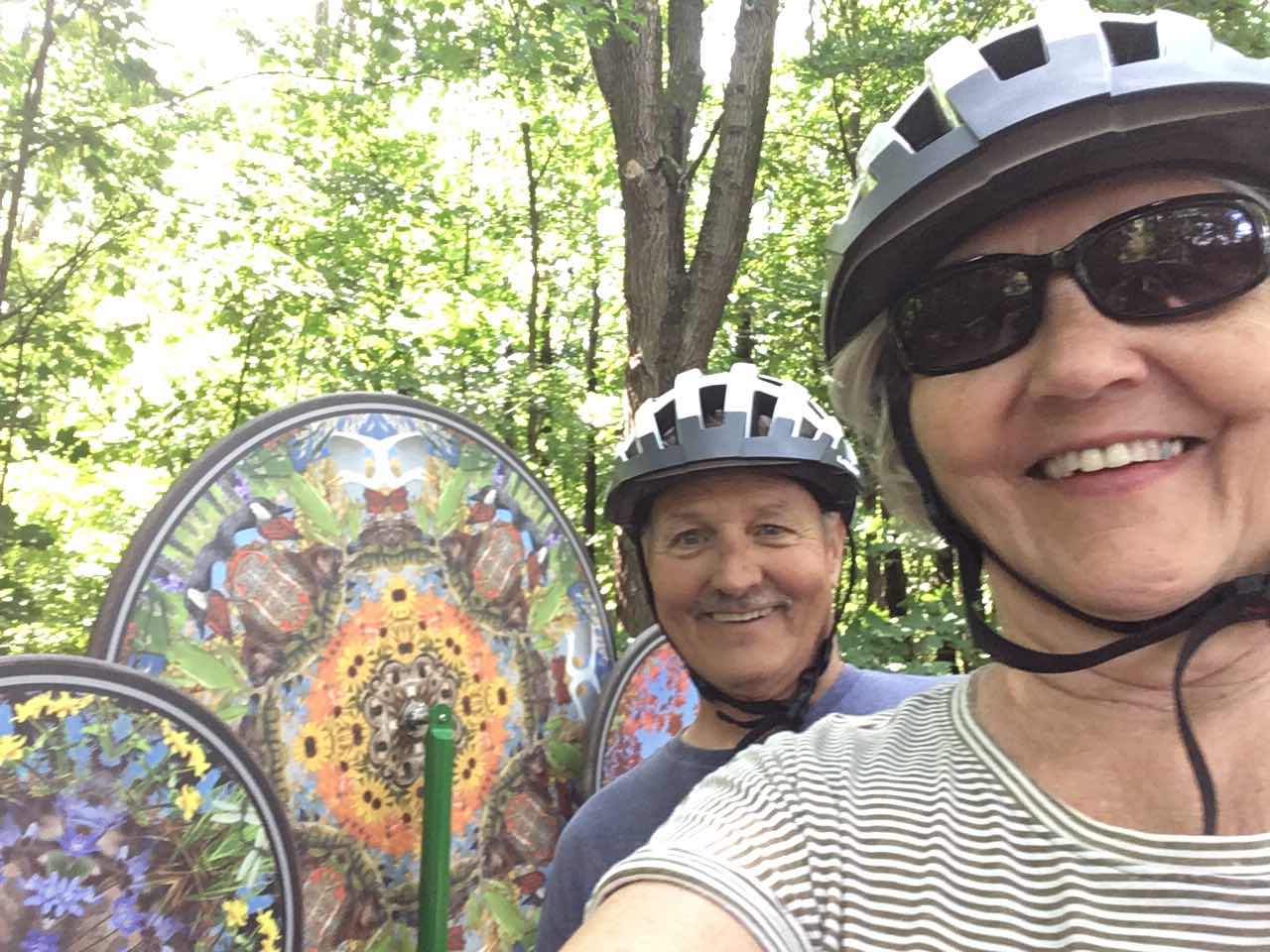 This is a kaleidoscope sculpture along the Brown’s Creek Trail. 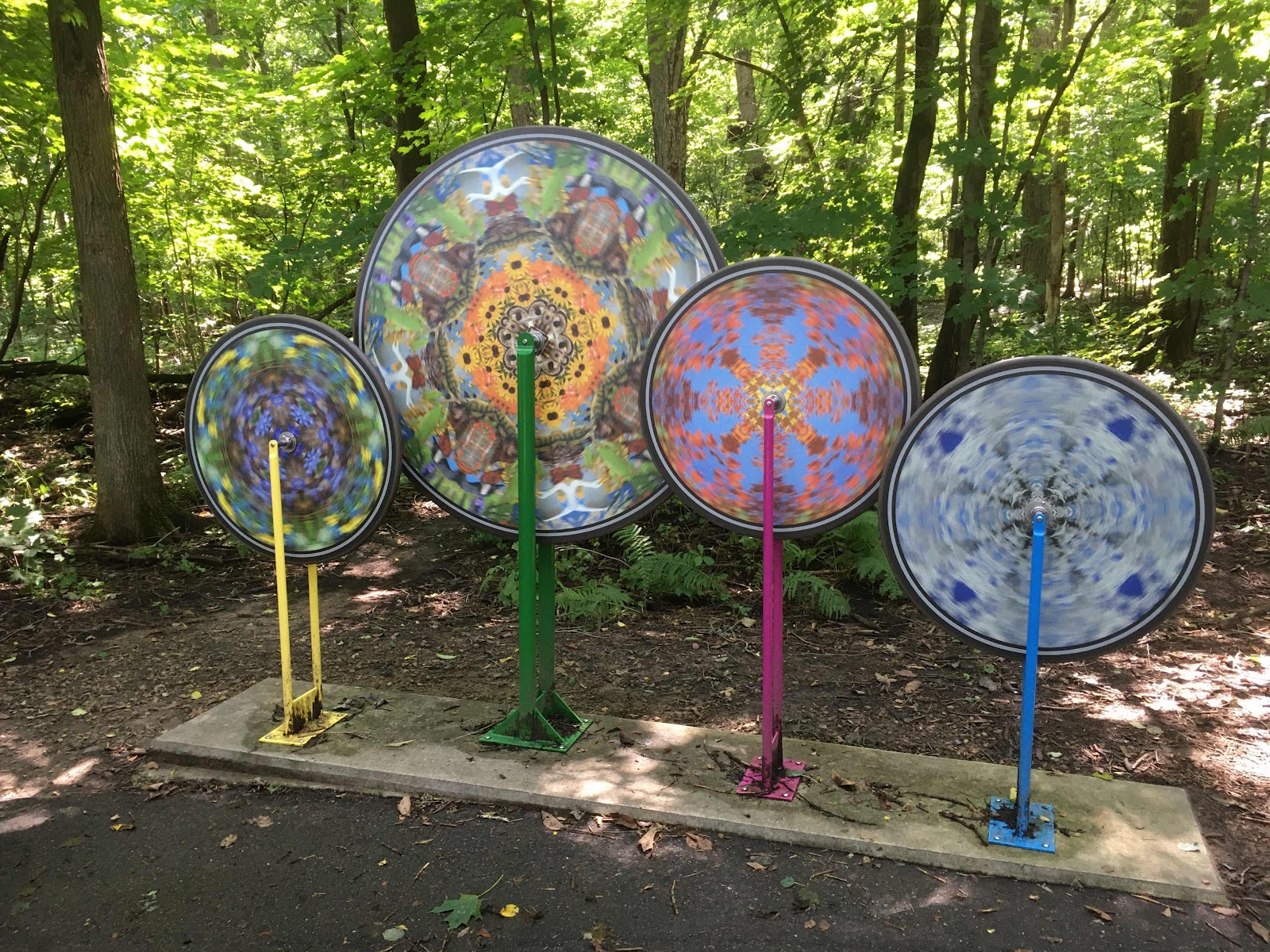 Posted by Bridge Coast to Coast Saga at 3:28 PM

Another week has past and I haven’t written a thing. The only highlight was a family gathering to celebrate Jill’s birthday with cake and ice cream at their house on Thursday. We had a nice chat with Lois and Dennis too.
I had follow-up appointments with the dermatologist and ophthalmologist. The stitches on my forehead were removed and I received the first injections of steroid along the hairline that will, hopefully, prevent any spread of the hair loss. I will need to see a dermatologist in Arizona for quarterly injections.  I had a good checkup with Dr Sanderson, got a new prescription for a closeup correction, and headed straight to Costco to order glasses.  The process of taking glasses off and on is driving me nuts.
The Democratic Convention was held this week and Joe Biden Is the nominee for President and Kamala Harris for Vice President. They will be getting my vote.
Sunday was Mike’s 73rd birthday and I had conversations with both of my sons, on the phone for an hour and 45 minutes with Pat, much of it about the upcoming elections. Unconsciously, I am overcome with sadness and grief on these days and end up feeling sluggish and moving around the house.
Posted by Bridge Coast to Coast Saga at 9:46 AM

I did no writing over the weekend, but I do have a Sunday event to write about.  We decided to do some exploring, so we headed for Taylor’s Falls and Interstate State Park to explore. The first indication that this might not be a good idea came when we pulled into the parking lot near the Visitor’s Center and saw the “Park Full” sign posted.  This lot gives you access to the Pothole Trail which was our destination. We drove back about a mile to the parking lot where we could access the River Trail that would get us to the Pothole Trail. I wouldn’t say that the trail was crowded, but we did have to move to the side many times to let others go by.  We probably should have opted to return on a different day to visit but since we were there, we took the rough, rocky, and hilly hike along the St Croix River, stopping at a few scenic overlooks. We didn’t make it to the Pothole Trail, as we are not accustomed to this type of hiking lately - most of our walks are on flat ground. It kind of felt like we were hiking back in Arizona. 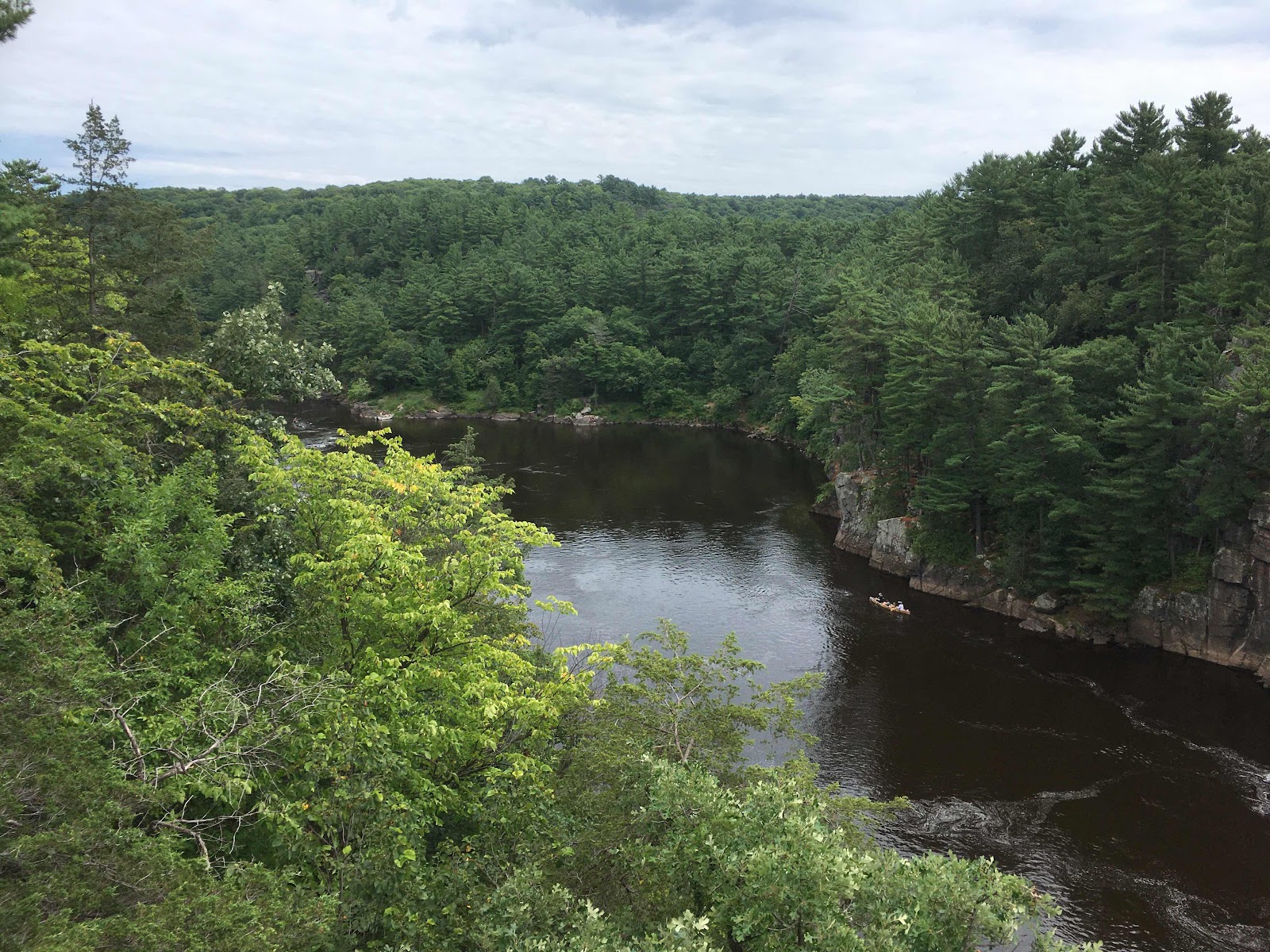 I just had to post this one of Frisco, he was focused on what Tom had to say to him. 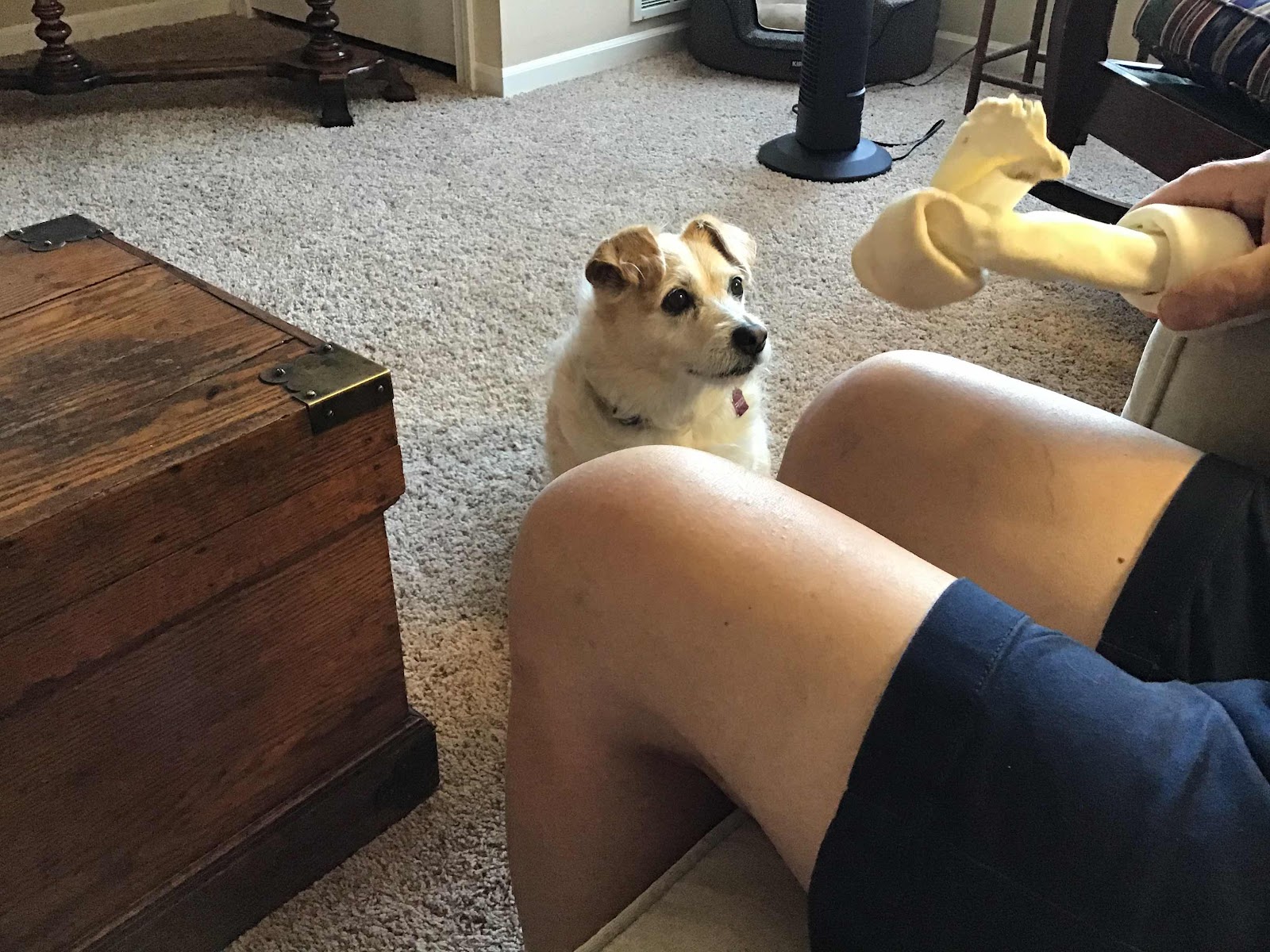 Posted by Bridge Coast to Coast Saga at 6:45 AM

I had a follow-up appointment with the dermatologist regarding the Alopecia on my forehead and it was a disappointing one. The doctor felt like the appearance had changed and he didn’t want to go ahead with his original treatment plan (steroid injections) without seeing what is happening under the skin, so he took a biopsy and will then determine the treatment plan.  I now have a large scab and 2 stitches in addition to a bald spot on my forehead. 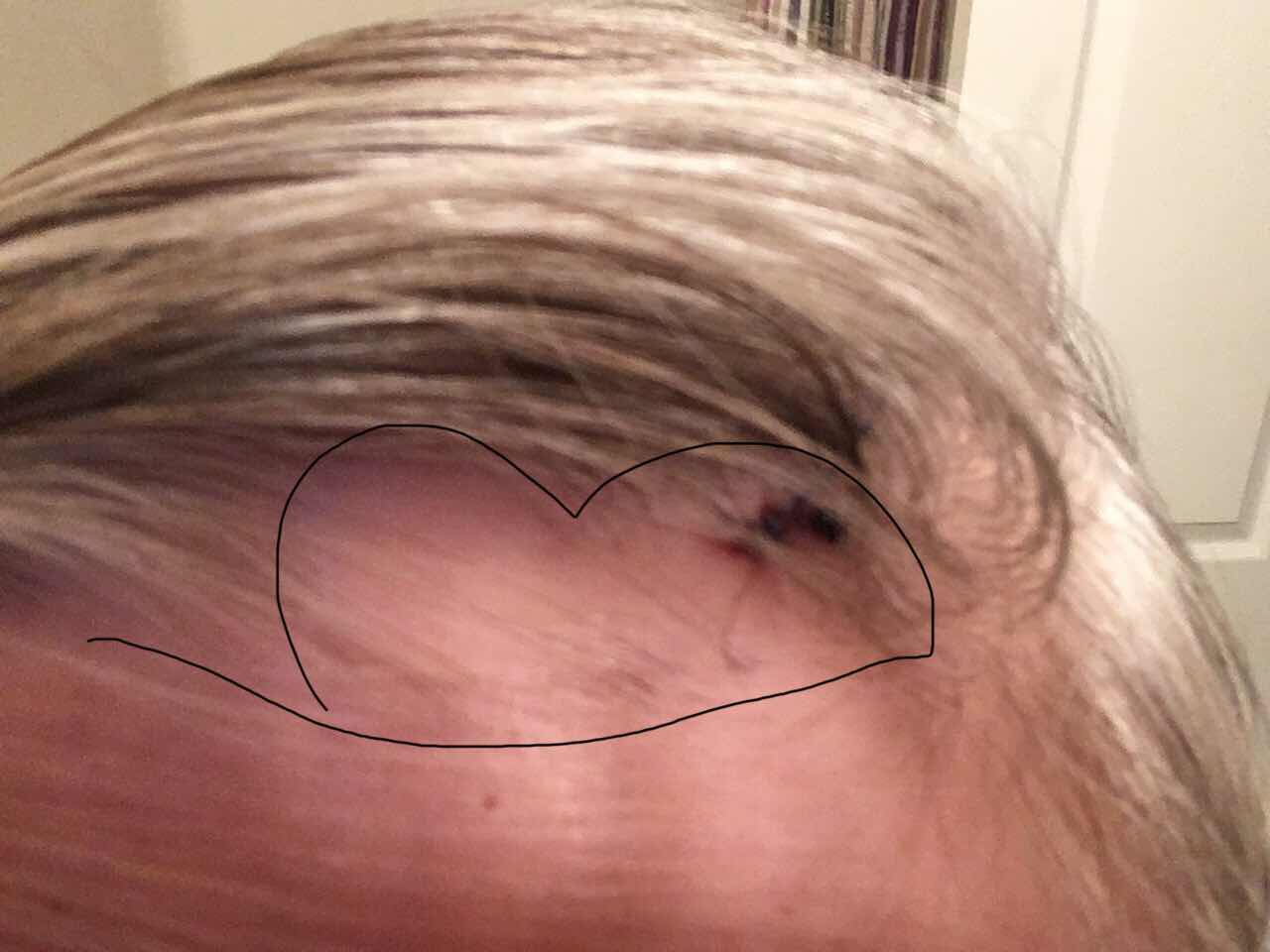 Yesterday, I got a call from Patrick with bad news. Tracey’s brother, Guy, was found dead in his apartment, probably from liver failure due to alcohol poisoning. He is another example of a great guy who struggled his entire adult life with alcoholism.  He and Tracey were very close and this is going to be real tough on her. My heart goes out to the family.

Guy Johnson unexpectedly passed away at the age of 49. He is survived by his parents William D.L Johnson and Donna Johnson (Currie), his sister Tracey Johnson, Pat Bridge and nephew Rhys Whitehead, his sister Dana Stadler (Johnson), brother in law Justin Stadler, nephew Gavin Stadler and niece Ava Stadler. Guy was very close with his aunt's Carolyn Culp and Diane Wiggen. Guy loved his large extended family and lifelong friends.
Guy was a curious child who was high energy and full of life. He loved tinker toys and taking things apart to see how they worked. He was artistically talented and was chosen as one of ten kids from his entire elementary school to work on a large mural that was so beautiful it was displayed in the school for a decade.
Guy was an active teen. Due in part to his curiosity he learned the basics of car repair from his father and kept all of his cars running throughout life. He enjoyed working with mechanical things and loved computers, video games, movies, reading, camping, swimming and bike riding.
As an adult Guy entered the military and served in the army. He was based in Oklahoma and excelled on the rifle range. Guy loved to travel and was able to see almost the entire US as well as some European countries.
Guy was quick with a joke and had an great sense of humor. He laughed easily and often. Guy was more than one thing, one interest, one interaction and will be remembered and loved for the sum of his life. He will be greatly missed as he shared so much of his life with his family and friends.
Details of a celebration of life will be posted when arrangements have been made.

Posted by Bridge Coast to Coast Saga at 7:42 PM

Today was fun! I bought tickets for another Monday Madness Mississippi River boat ride, this time with the granddaughters. After promising their parents to be cautious about COVID protection, we were allowed. We got to their house and stocked up on snacks, they put shoes on (but wanted flip-flops and sandals), got a seat added to the van, and headed out - arriving in plenty of time to check-in and board the boat. This time, there were more people and we took two connected riverboats, one pushed by another.  They were happy to get potato chips and lemonade for a snack, were interested in walking around and checking out the boats, and standing on the upper deck in the front of the boat. 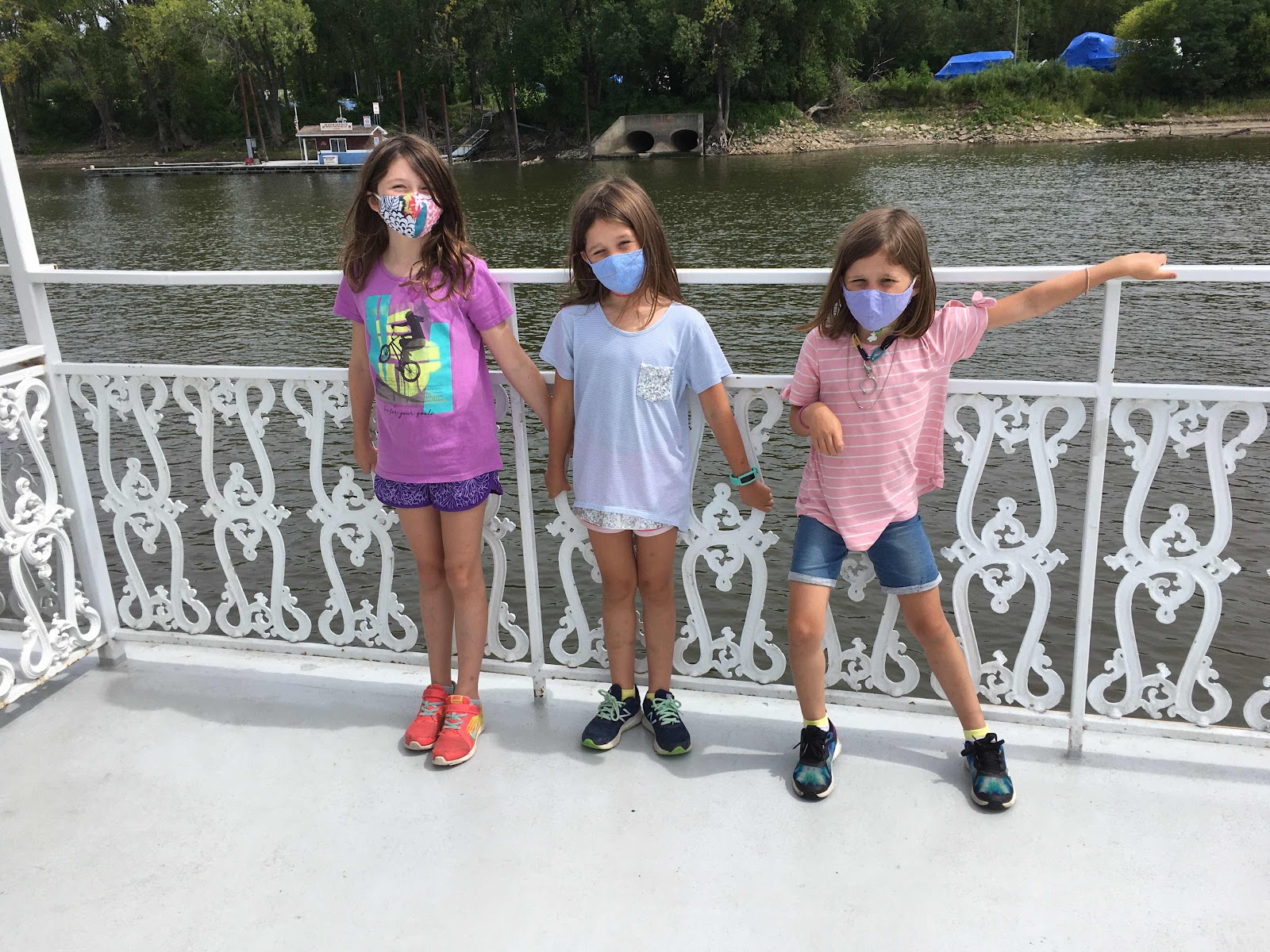 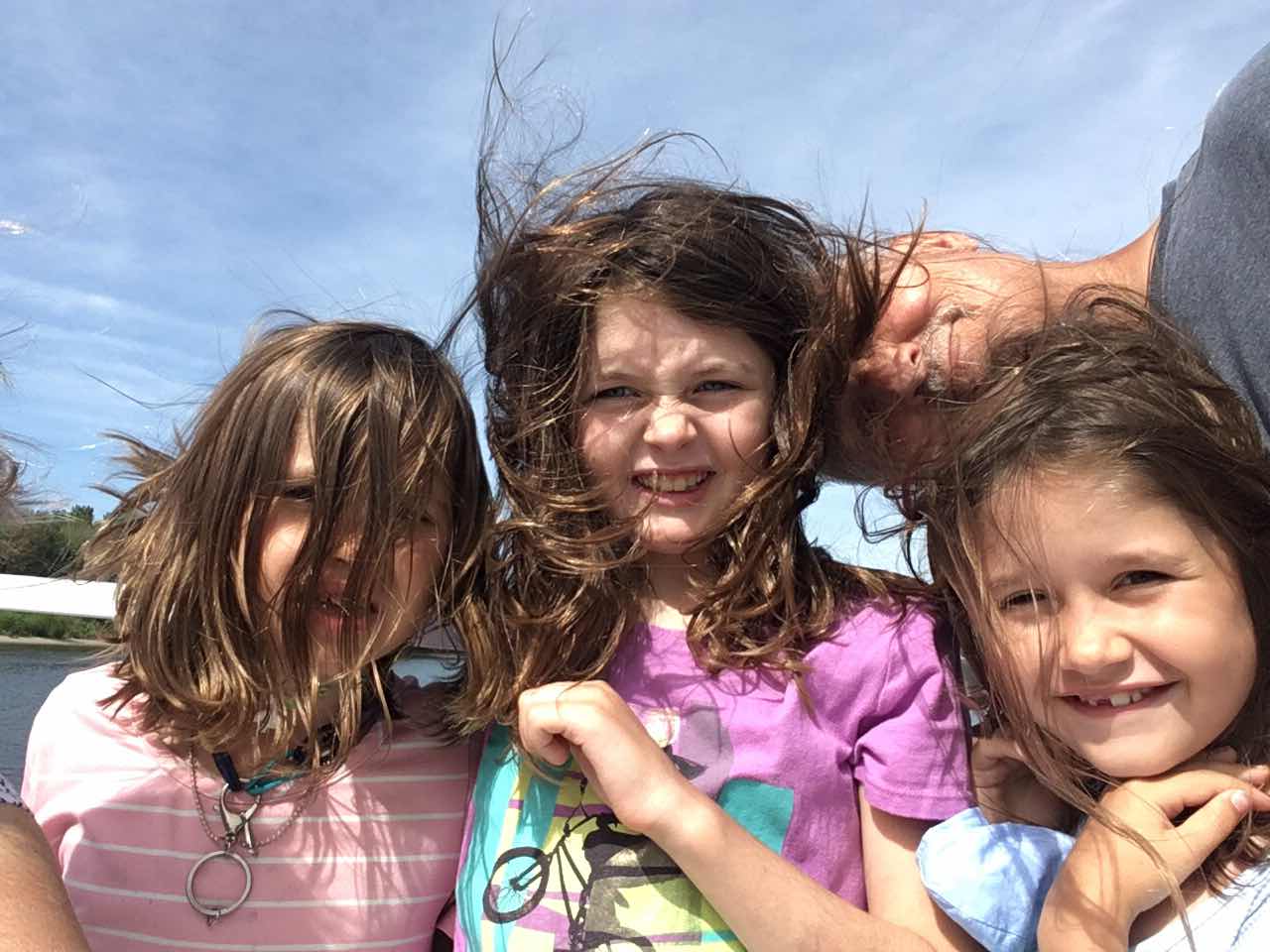 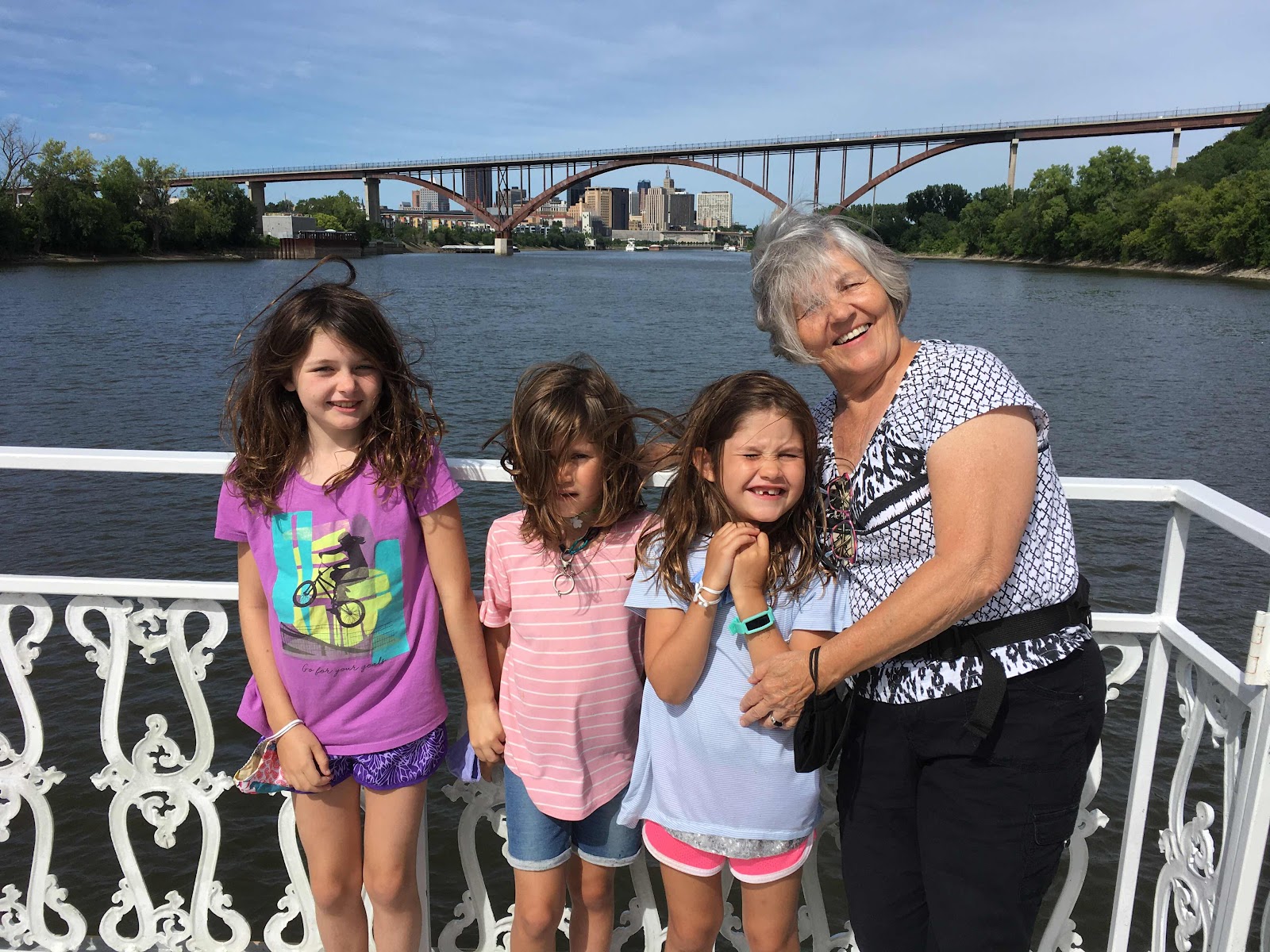 Posted by Bridge Coast to Coast Saga at 5:41 PM

Where has another week gone? Again, we fill our days and before we know it, we’re making dinner and settling in for the night. We continue to get decent walks in every day, taking different routes in order to not get bored.
I went to Ben’s Wednesday afternoon and hung up with girls for a while. They had already been on an outing with Ben so we just played with Zootopia characters and Barbies. I’m going to pack as many hangouts in as possible for the next two months.
I also learned that my cousin Jonnie’s granddaughter has had a tragic end to her life when I saw the following go fund me account on Facebook:
At age 23 Jaidyn Teubert dealt with personal struggles for years but for the last 18 months she had worked hard to straighten her life out and we were all so proud of her. She was clean, had a good job, her handsome son Alex and baby Greyson due in 3 months. On Sunday August 2nd she had a cardiac episode that shocked us all. Baby Greyson died from the initial episode. Jaidyn was ambulanced to Stoughton hospital and then taken by med flight to Madison where she remained in a coma. The doctors in Madison stated that she had at least 3 cardiac episodes that they could tell and verified that she was still CLEAN. On August 4th the doctors gave the devastating news that Jaidyn could not breathe on her own. Her parents (Troy & Shellie) went up to say their goodbye's to her.  They have not only lost a grandson they didn't get to meet but also their daughter. I set this up to help them pay for the medical/funeral expenses for Jaidyn and baby Greyson and to also be able to set up an account for Alexavier, Jaidyn's 6 year old son.
I’ve been in touch with Jonnie and her family is struggling with this reality. Dang, it is so sad.
Tom and I took a walk along the trail that is bordered by Mill Street and the Mississippi River near downtown St Paul. We were fortunate to be able to watch the Mary Kay Cavarra Barge ship reposition it’s place on the river. 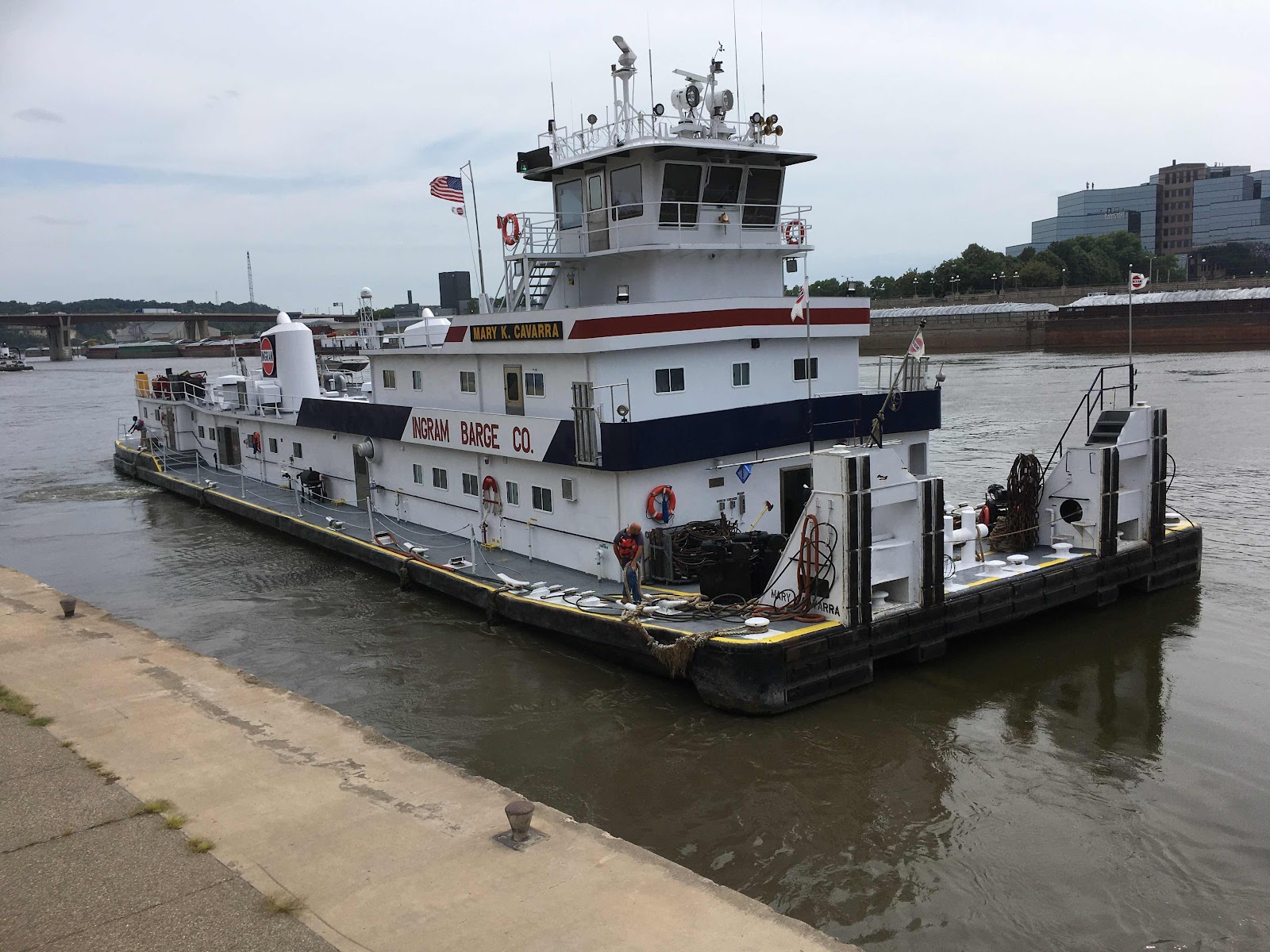 We walked under the High Bridge and the Wabash Street Bridge on our 2.5 mile walk, including a stretch where there were several metal bird sculptures that were pretty cool. 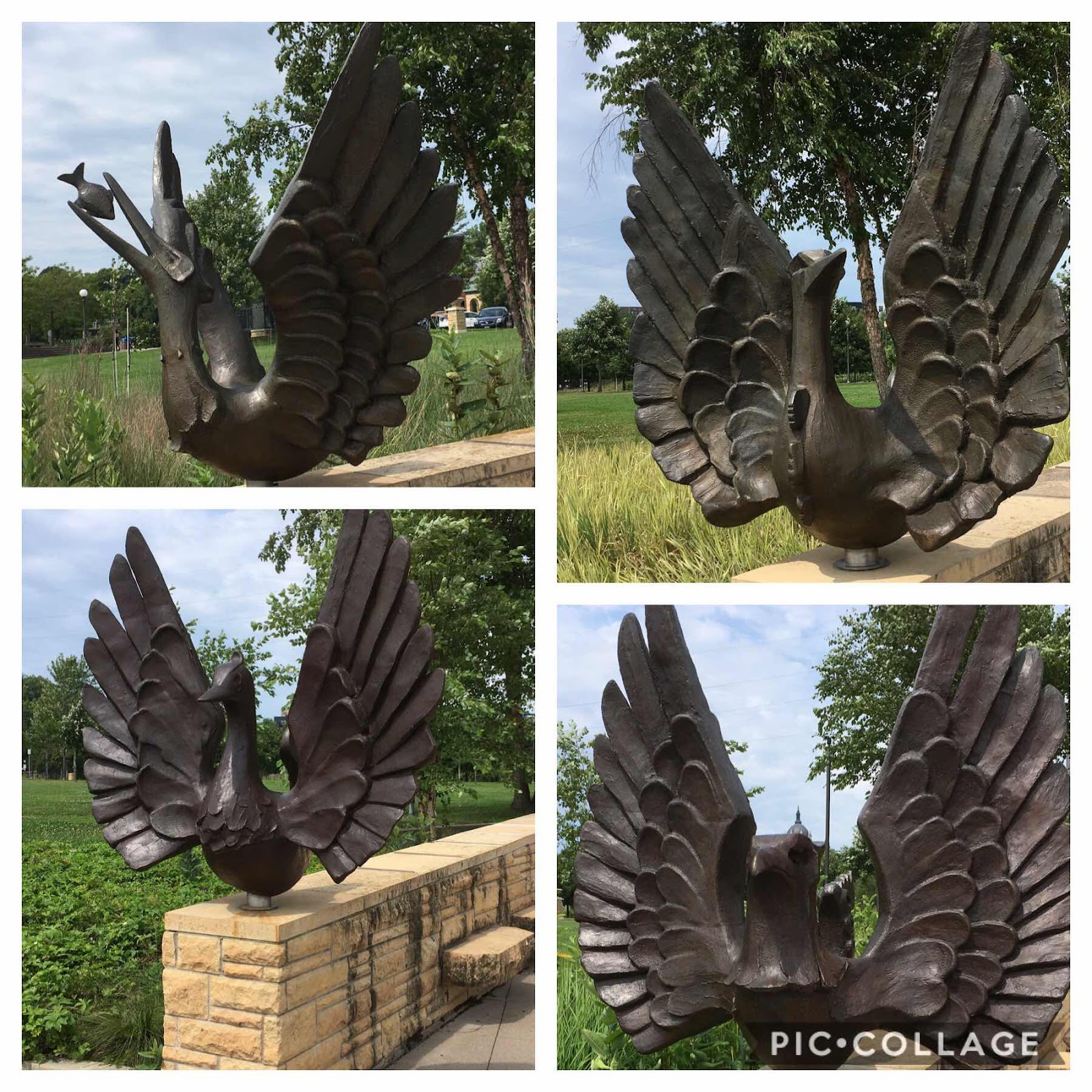 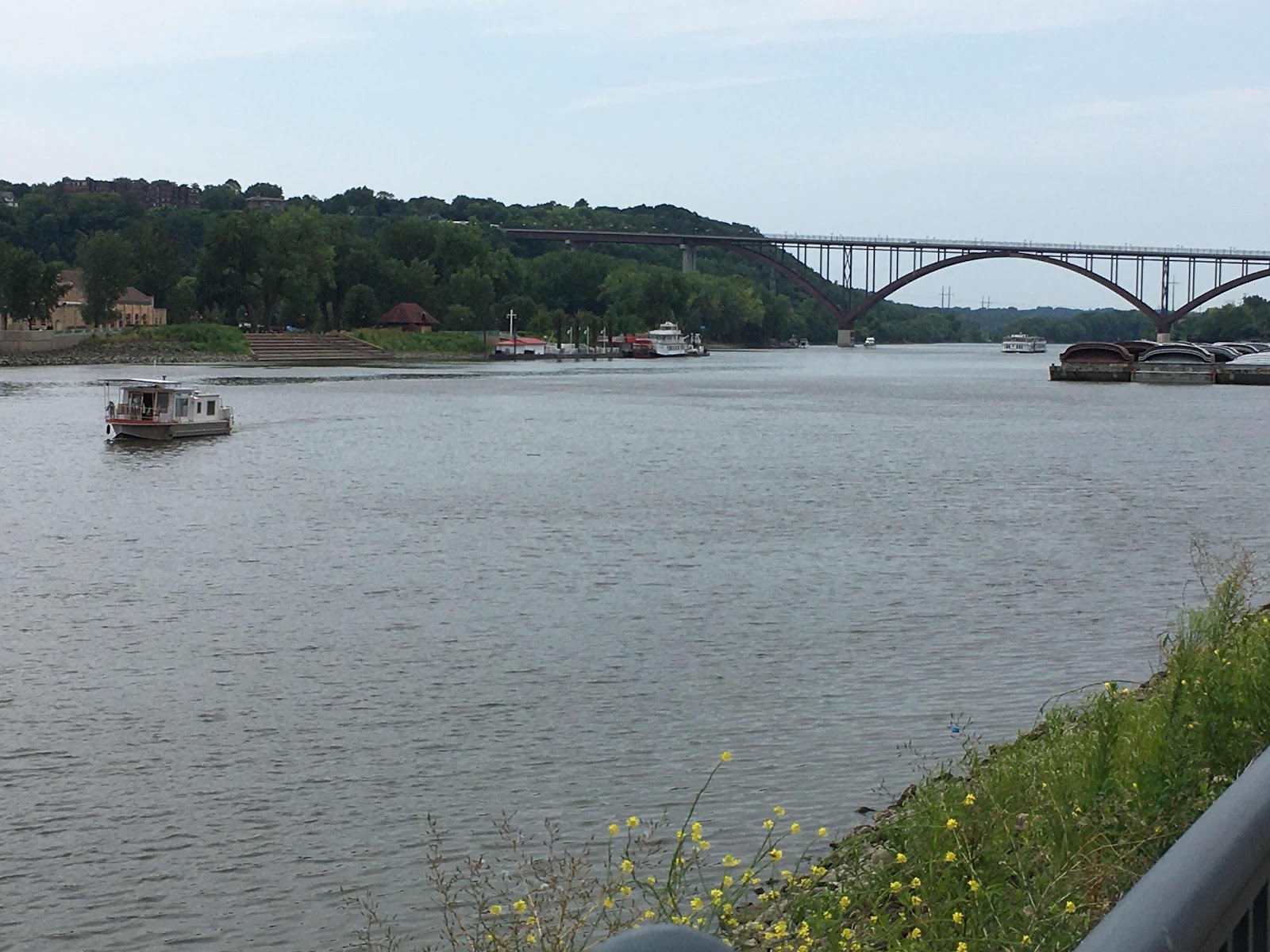 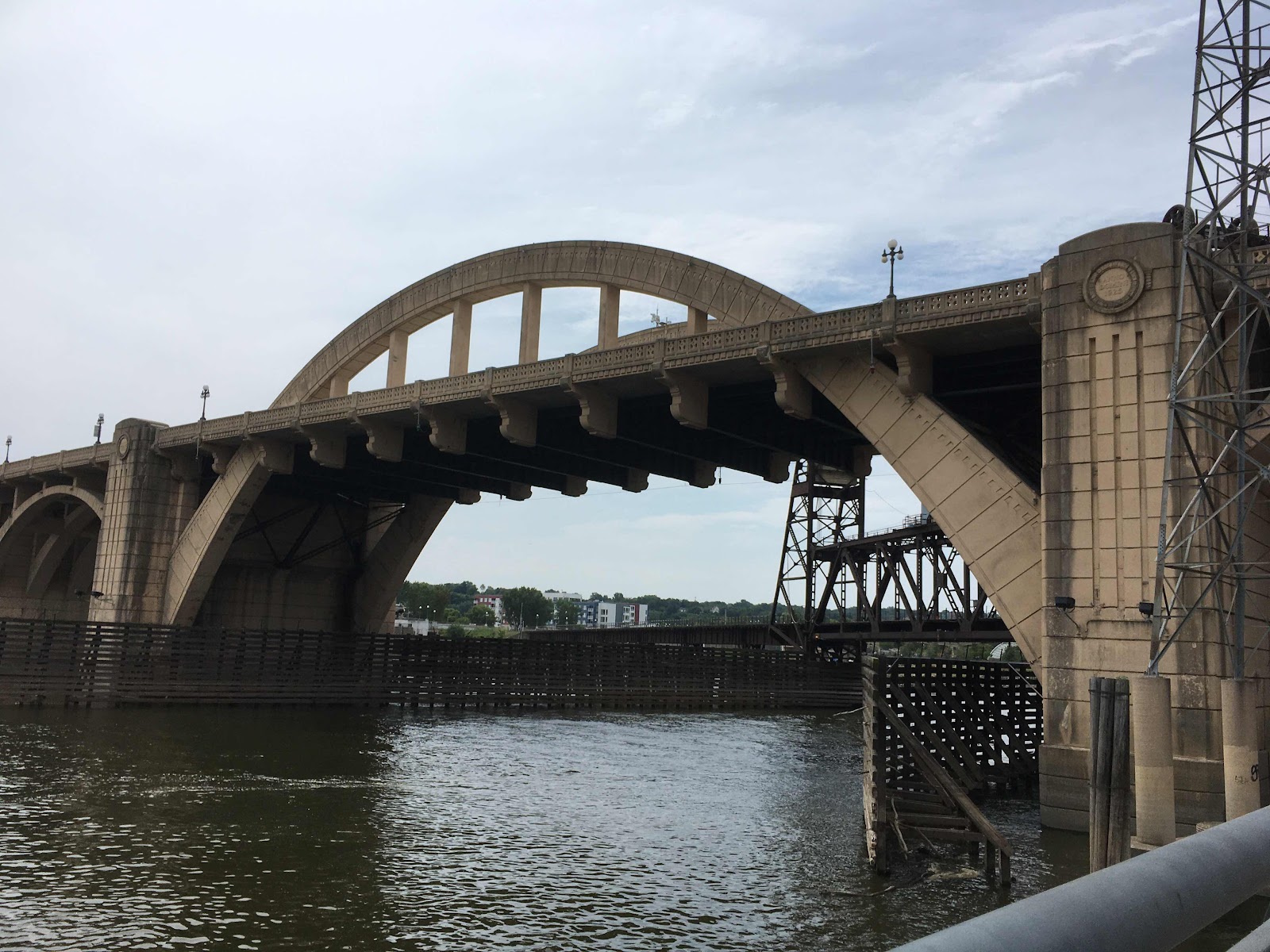 Posted by Bridge Coast to Coast Saga at 4:35 PM

I had my post-op checkup yesterday morning, drove there myself because I was feeling confident that my vision was good. Tom patiently rode along. At one point, a white SUV cut in front of me and I was amazed at how bright the white actually was. I got a good response from the doctor and thanked him - he replied that it was fun for him - he felt so good when he was able to help people and improve their vision.
Today was a great day. We met up with Ben and his girls (Jill had other things going on) at Hidden Falls Park and we hiked the trail along the river and past the Eagle’s nest, through the woods, then to the falls where the girls climbed around on the rocks and cooled down in the rocky ravine. After that, we setup chairs and the hammock and hung out until about 3:00. The girls had fun in the hammock, we had snacks, and played a few games. It was great to see them after 6-weeks. 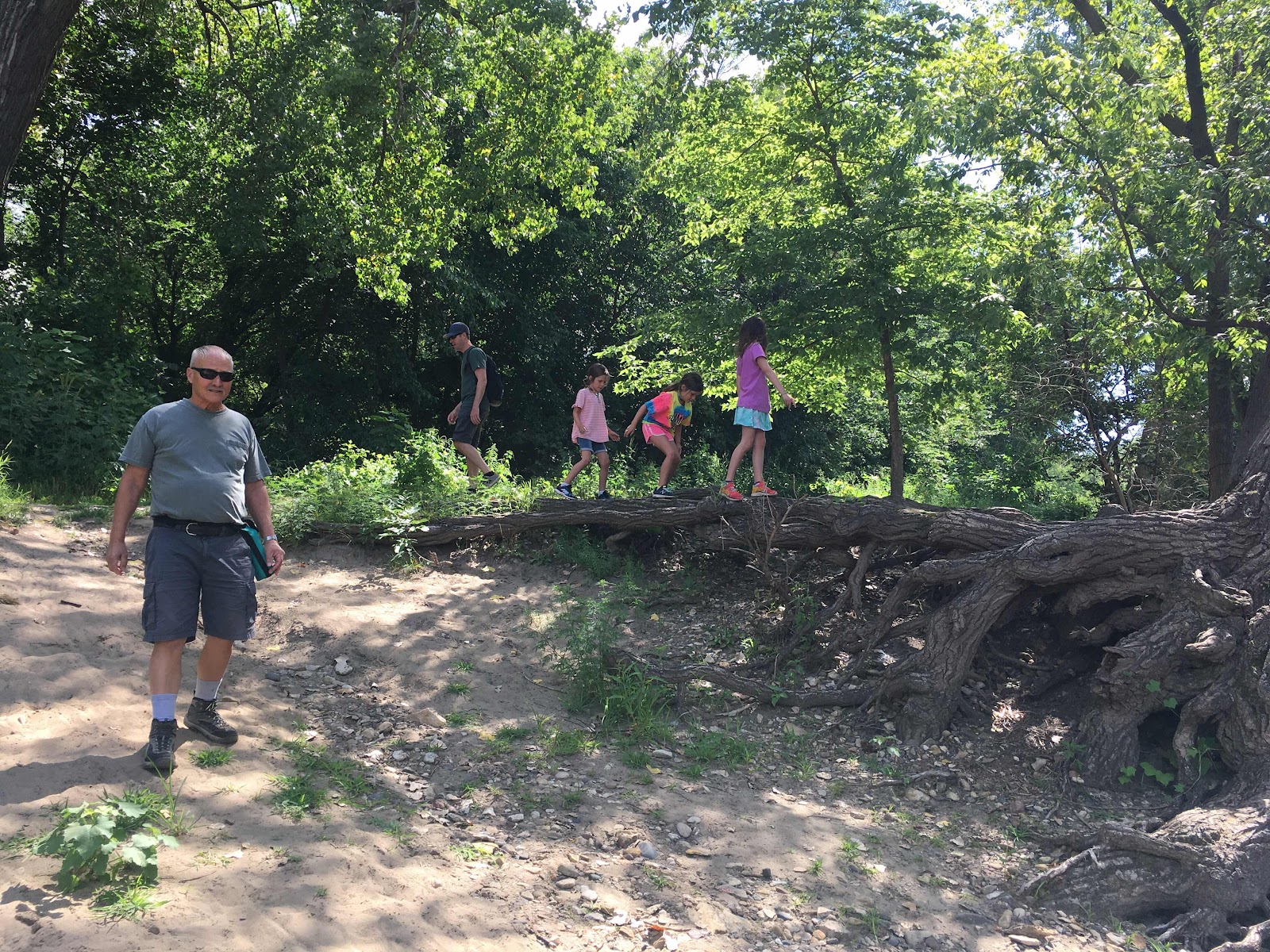 Funny how hard it is to get both of these girls to look at me at the same time. 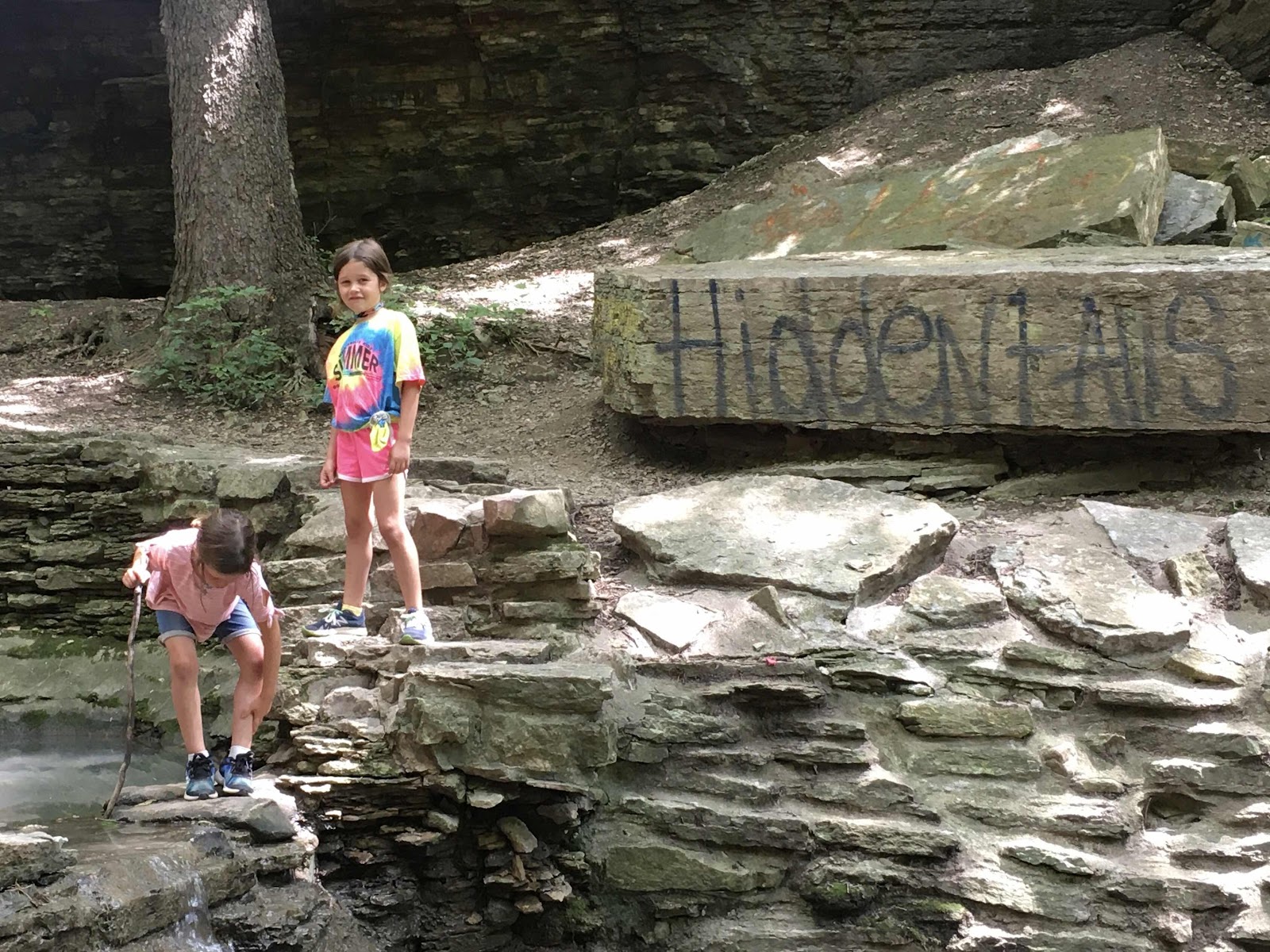 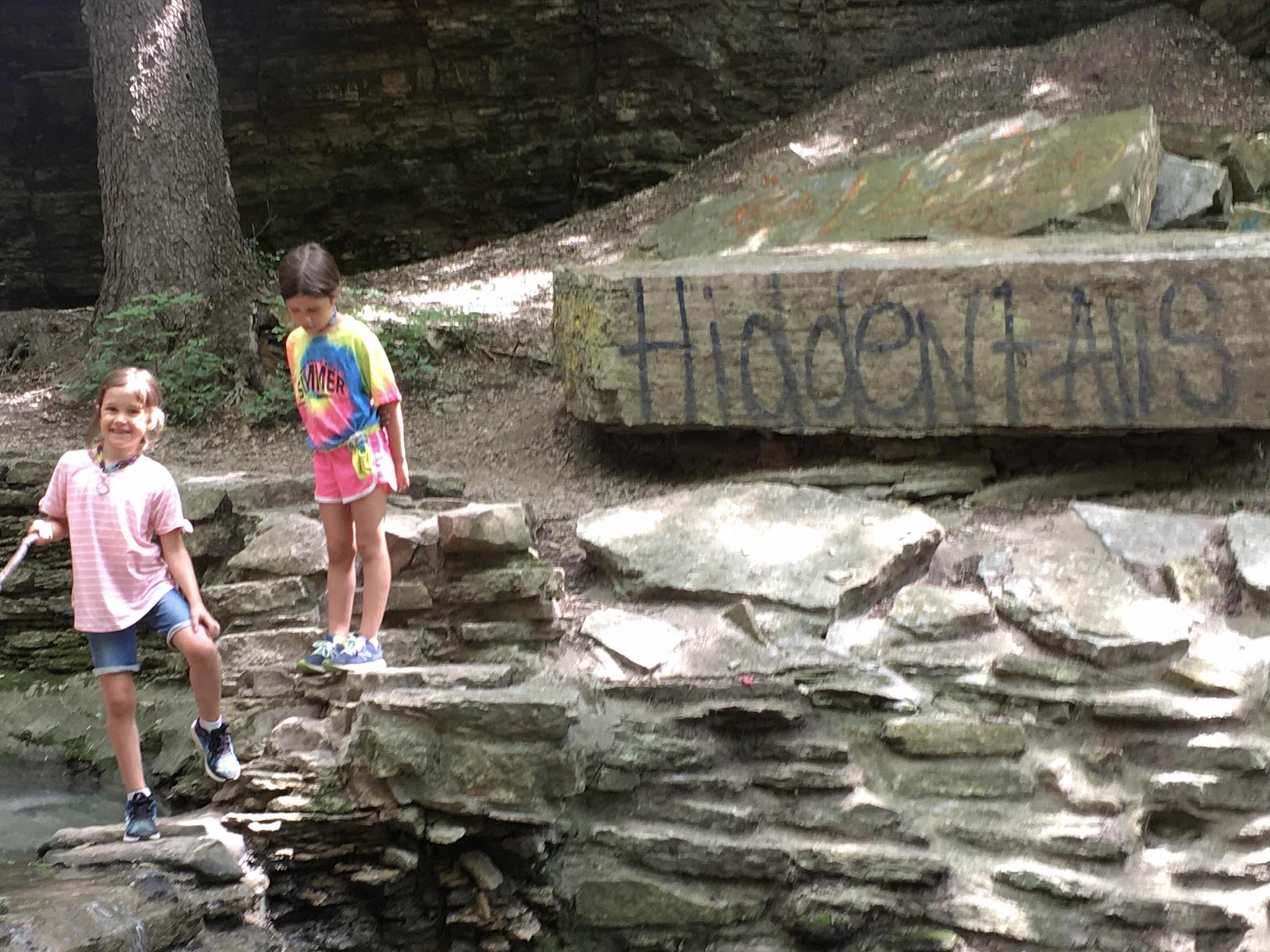 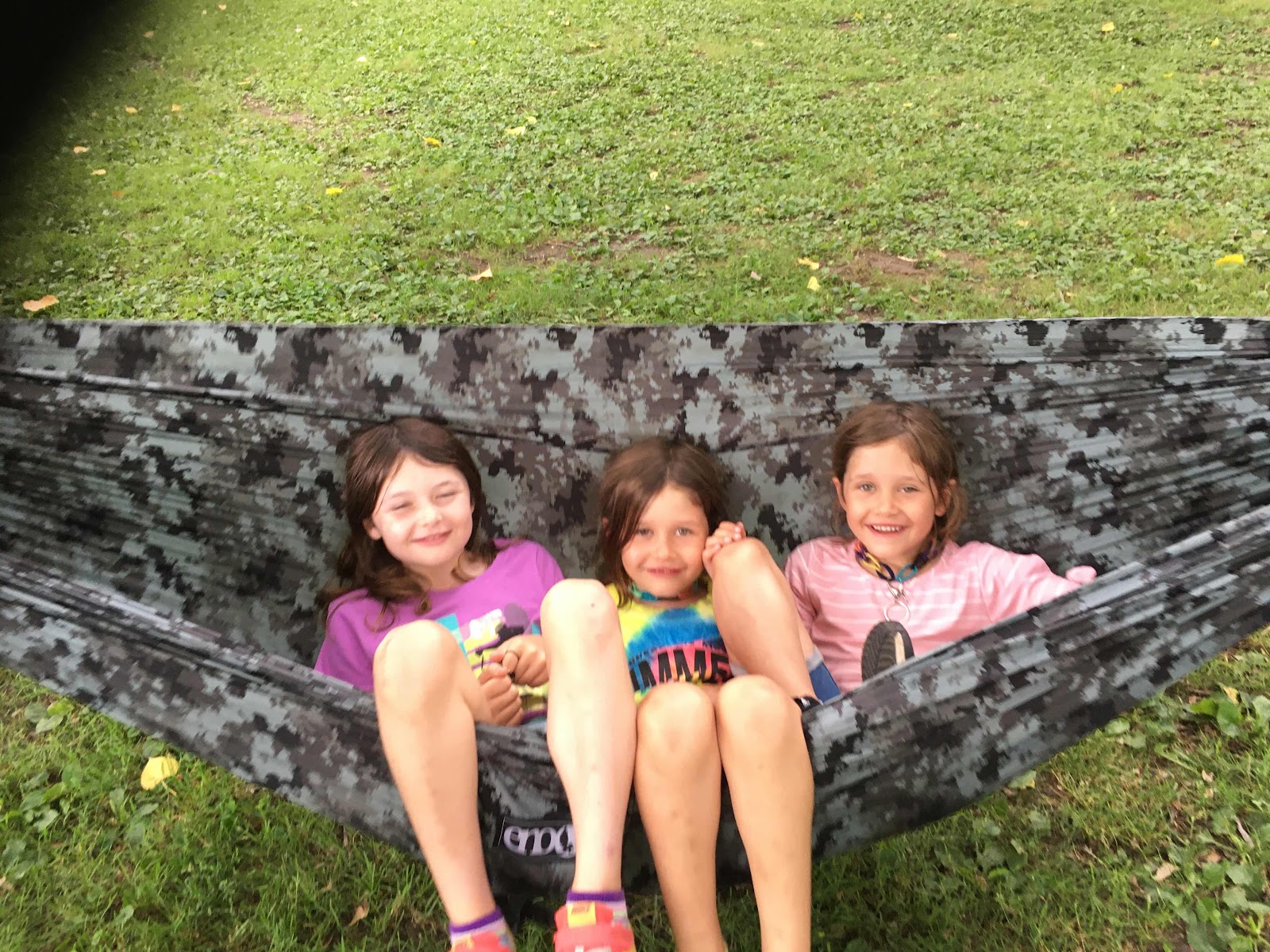 Posted by Bridge Coast to Coast Saga at 4:39 PM