Tuesday, June 27.  We did some touring yesterday as I wanted to show Tom around to a few Wisconsin originals and we started out with a stop at Fosdal's Bakery in Stoughton for one of their famous chocolate donuts (I chose a fruit bar) and we were hoping for a breakfast sandwich but they only had lunch sandwiches, so we walked up to the Koffee Kup for breakfast.  You can't get more Stoughton than that.

Tom suggested a visit to the National Mustard Museum in Middleton, so we headed in that direction and he got to experience driving the Beltline in Madison (not bad when it's not rush hour).  The museum was interesting, we sampled several and bought a few too.  The next stop was to be Capital Brewery but they were closed on Mondays, so we headed toward Wollersheim Winery, but drove past that to Dr. Evermore's sculpture garden.  We strolled the grounds to view the Forevertron (a space ship like sculpture that is to beam him up to the heavens when he dies), musical instrument insects, and all of the other incredible creations the man has made from scrap metal objects during his lifetime.  I learned from his daughter that they are working on a Netflix movie and that there is an "Evermor" TV show, but I haven't checked it out yet. 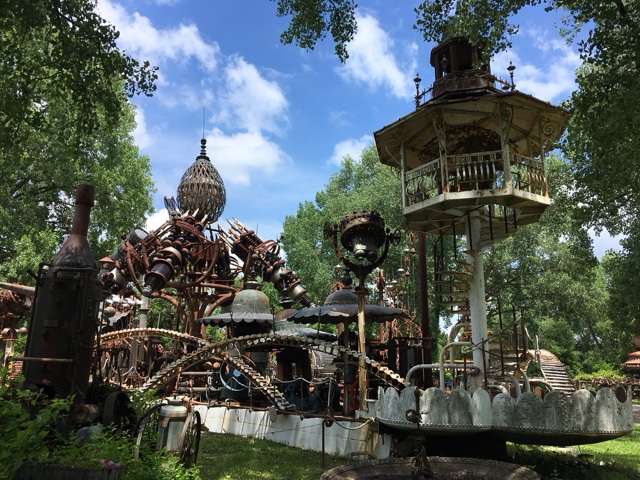 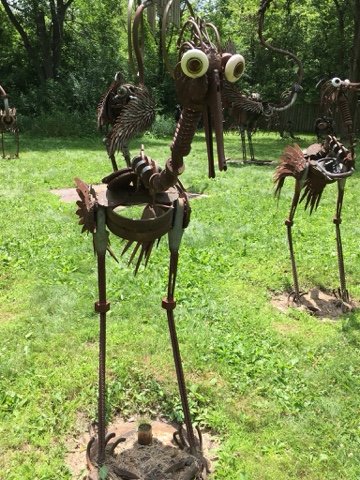 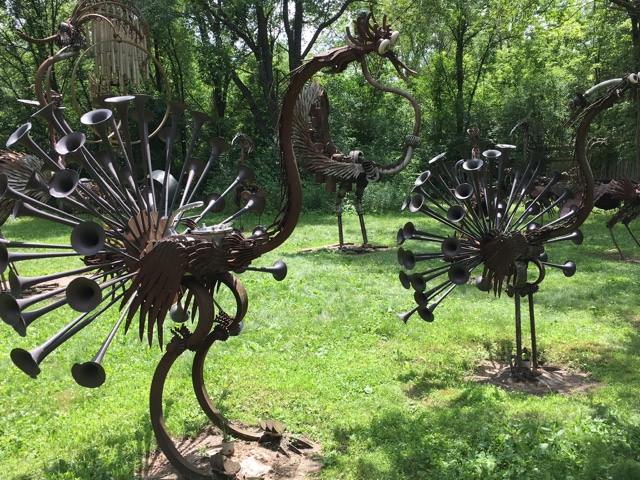 And then, we went to the winery where we strolled the beautiful grounds, sampled a few wines and then walked over to the distillery and sampled the Rye whiskey and the Absinthe.  We missed the rush hour traffic on the way home, thankfully. It was a full and fun day and we were both thankful to have each other to explore with - it's not much fun doing those things on your own.

This morning, I had an appointment to have my transmission flushed and brakes checked at Conant's.  While they had the car, Tom and I took care of some chores and checked out a few shops in Stoughton. At TSC, we filled a propane tank, at Cheezers we bought cheese. I had hoped to take Chocolate cheese back to the kids but it was not Gluten free, so that plan was nixed. We drove to Badgerland campground and Kegonsa State Park and checked them out, but VV is probably the best deal for us in the future.

It was a rainy day off and on and when we went to Pat's for dinner, it poured for a couple of hours straight.  We did have a nice visit, though, and Dawn joined us for a while.  When we left, it was goodbye for a couple of months, as we will head back this way in the fall before we go back to the southwest again.

Wednesday, June 27.  We had a bag full of laundry, so took care of that this morning and walked in between showers.  No breakfast, as we wanted to have lunch at Sonny's (it has a new name but looks the same) in Stoughton. Our sandwiches were tasty.

Back at the trailer, we started to tidy up and get ready to roll again in the morning.  It was beautiful out and we sat and enjoyed the evening. This park is quite pretty and most of the week there have been no neighbors.

Friday, June 29.  Hookup for departure went well yesterday morning except for a little glitch with the connector for trailer lights, but Tom was able to get it cleared up - for he problem was moisture or dirt.  We were on the road by 10ish and only had 125 miles to go to the Pine View campground in Fort McCoy, an easy drive with one stop at the rest area north of Wisconsin Dells.

Our site is very nice with plenty of shade. It's going to be a hot few days as temps are expected to get up in the upper 90s with high humidity. There is an occupied site to the right of us and across the street, but plenty of Woods separating us.  We took a walk and sat around the campsite - too hot for a fire. 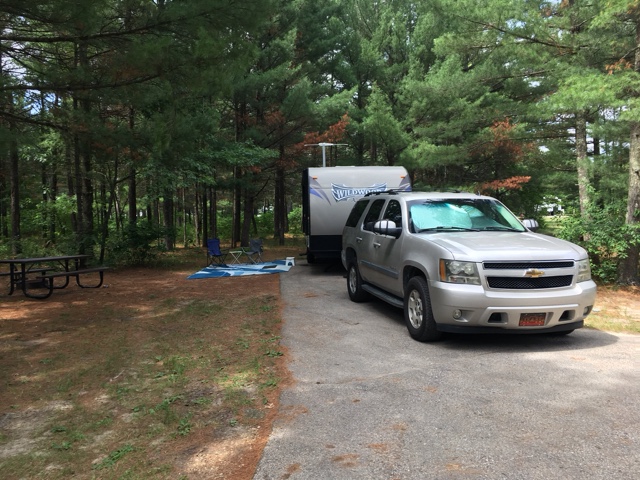 Today was fun - a leisurely wake up, a nice, long walk and then a trip to the Cranberry Capital of Wisconsin, Warrens - a small township of 350+ people that swells to 100,000 in the fall when they celebrate the annual Cranberry Festival.  We stopped at the Discovery Center and learned a lot when we went through the nice little informative museum and checked out the beautiful collection of antique cranberry glass (not made in this area, but the name fits). And then we shopped, leaving there with 2 jellies, some potpourri, and a bottle of cranberry moonshine (not distilled in WI).

Back home, we sampled that moonshine and it has a bite - the bottle is filled with cranberries and they have a bite too - it is definitely sipping stuff.  There wasn't much else to do, so we went and took a dip in the cold, clear water of the little lake that is fed by the LaCrosse River.  It didn't take long to cool down.

I grilled pork chops and potatoes for dinner while Tom cut up some salad.  We ate, cleaned up, and headed to the Tomah-Sparta Speedway for an evening of modified, sportsman, stock car, and super cup races topped off with fireworks.  I don't remember the last time I saw a race and it was a fun thing to do. 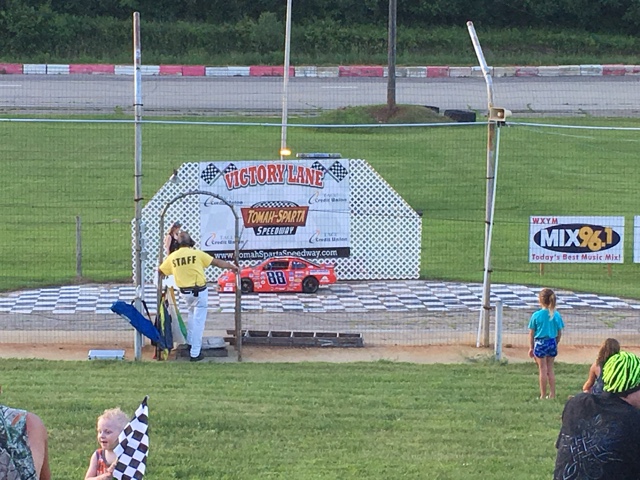 Posted by Bridge Coast to Coast Saga at 5:34 PM