Monday, October 15.  The alarm went off at 7:30, we got up, got ready to roll, and headed west on I-40 by 9:30. There was some of that ugly white stuff coming out of the sky as we prepared to leave. Predictions were bad if we were heading to the east, but fortunately we were going west and the temps hit above 40 degrees once we got into Arizona.  By the time we got to our destination, Verde River RV Resort in Camp Verde, it was 65 degrees and sunny. Yippee!

We have both wanted to come here, as we had each been here in the past and they have spent the last year and a half doing a major reconstruction from the roads to the sites with new mechanicals,  the new pool, clubhouse, and fitness center, and several rental cottages.  During the reconstruction, they were able to retain almost all of the mature trees in the park.  As I sat outside enjoy not the sunshine, I remembered that it was one of our membership parks when Mike and I were here back in 2008. 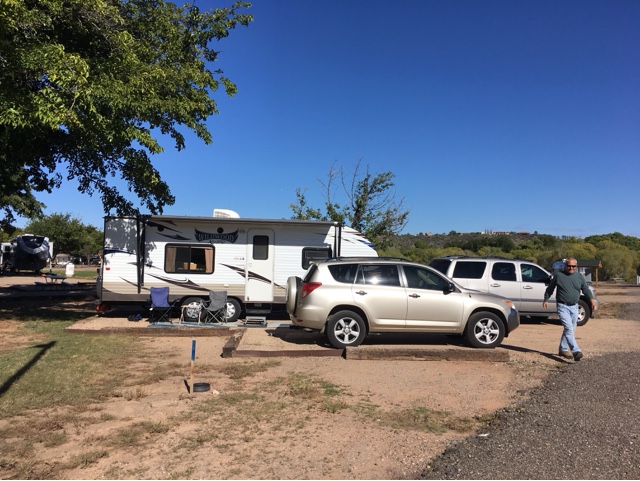 The wifi sucks and I'm not getting much of a cell signal either.

Wednesday, October 17. Yesterday was another rainy day, so we decided to take care of errands. Cottonwood, is about 15 miles away from here and has more amenities. We got groceries at Fry's for the first time in over 6 months and spent enough that Tom can get $.10 off/ gallon of gas at their station.  We also stopped to get a Papa Murphy's pizza for dinner, it's been several weeks and we were both kind of missing it.  The final stop was at CVS for my prescriptions. I was hoping to get a flu and the final shingles vaccines, but the lines were long and they didn't have the shingles shot.

When I got back home, I realized that I filled the wrong prescription, so ordered it and headed there this morning to pick it up. Once again, I thought I might get the flu shot but the lines were long again.  They are recommending that people get it ASAP as there are already more cases reported than at this time last year.

Saturday, October 20. Well. We have gotten 2 nice hikes in this week. On Thursday, we hiked almost 2 miles on a trail on the Copper Canyon Trail, a multi-use area, but we saw only 2 ATVers and 2 hikers while we were there.  The trail was level, a bit rocky, but nice and enjoyable.

Today's hike was a bit longer and it was in a more scenic area.  We started out at Montezuma's Well - an oasis in the desert, unlike any other on earth. The area receIves less that 13 inches of rainfall a year, yet, the well holds more than 15 million gallons of water. It all started from snow melt more than 10,000 years ago. Every day, the water flows, it is replenished by 1.5 million gallons of new water daily. The water actually contains arsenic, so it supports only rare species of life - a water scorpion and a shrimp-like anthropod and leaches that feed on them. No species of fish can survive there - weird, huh?  Surrounding the well is evidence of ancient people's living quarter in the caves-like dwelling surrounding the well.  Because of the arsenic, it is believed that the people lived much shorter lives, as they weren't aware of the damaging effects of the water. 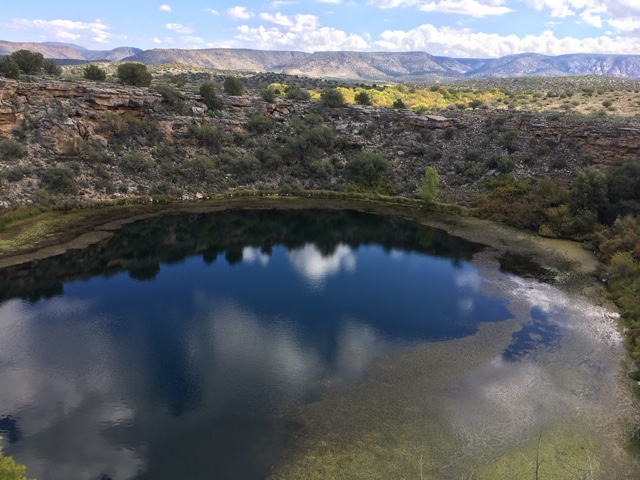 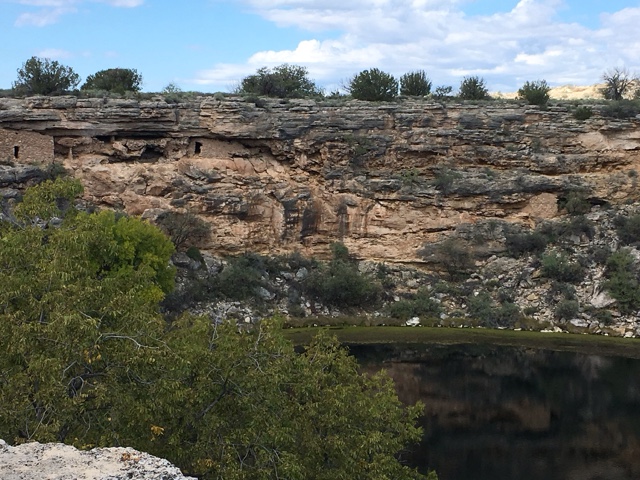 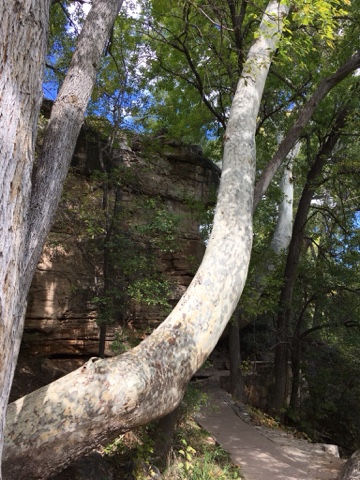 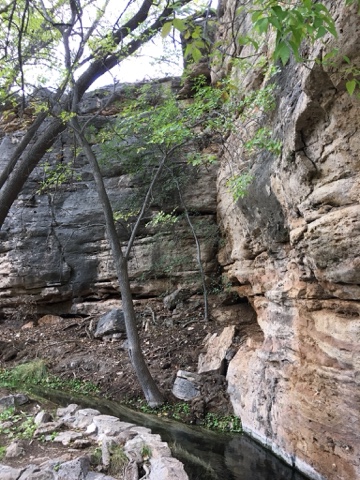 From there, we headed out on Forest Road 119, then FR 618 to the trailhead for the Bell Trail - that trail roughly followed the Wet Beaver Creek out through a canyon that was quite beautiful with bright red rock outcroppings, evergreen covered hills on one side and prickly pear covered hills on the other.  No wonder I like hiking around her so much, the terrain is endlessly changing and is always a wonder to see.  A couple that we passed told us that there was creek Access about a mile ahead, but we Nevada it that far. We hiked about 2 miles to the point where the White Mesa Trail intersected and then turned back.  We did find a trail that led down to the river and Frisco was able to take a dip and a big drink - good the night because we didn't bring enough water with us. All in all, a 4.4 mile hike in beautiful country. 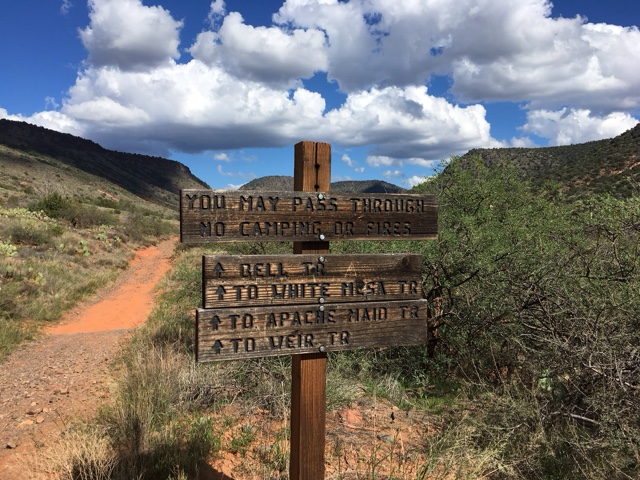 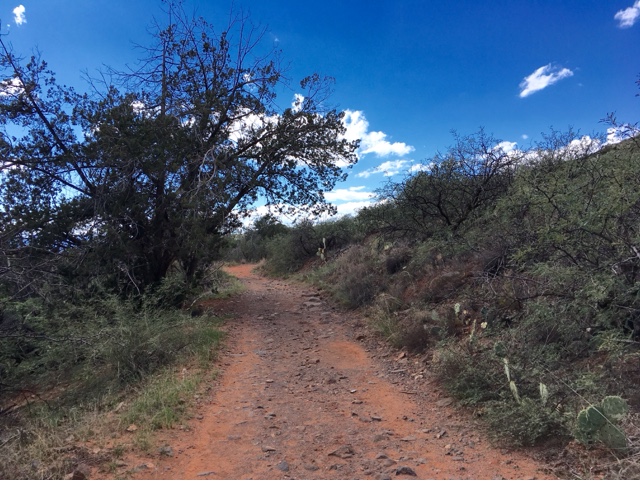 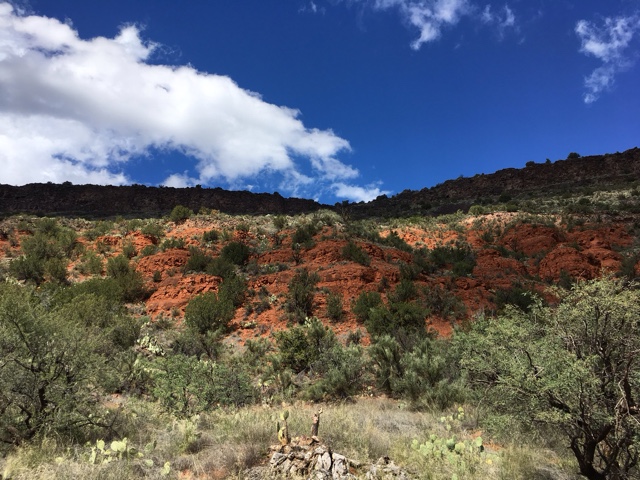 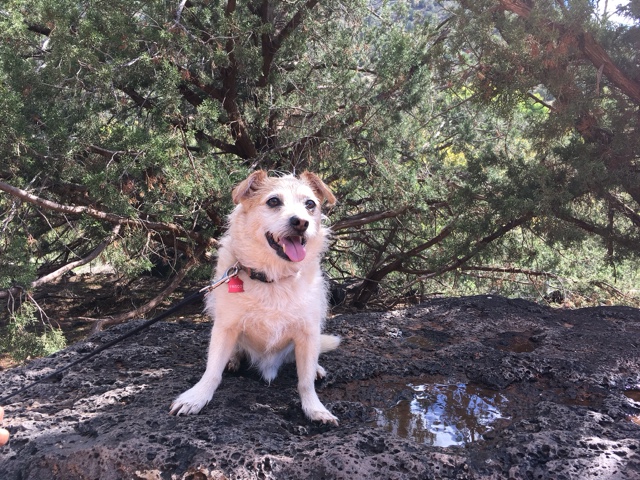 We let Frisco have a drink from this pool of rain water on top of the rock and he wanted to lay in it.

The manager of this park recommended La Casita restaurant in town for good Mexican food, so we went there tonight for dinner. We timed it so we would be gone for the park's Trick or Treating event - are we bad? The food was delicious and we both ate too much - imagine that.

Friday was also a very nice day, as we explored the historic mining town (copper, gold, silver,  lead, zinc) of Jerome.  In its heyday, the town had 14,000 residents but today, the population is 450ish.  We browsed some of the art galleries, checked out historic artifacts along the roads, buildings, and had a nice late breakfast at the Mine Cafe.  The scenic drive over the Mingus Mountains on the return trip was beautiful, we looped over to Prescott Valley and back home to Camp Verde.  Another pleasant day exploring this part of Arizona.

Posted by Bridge Coast to Coast Saga at 9:21 AM