Stoughton had city-wide garage sales today, so Pat and I went to a few this morning.  I only bought a book of children's sweater patterns.  Not that I will have much time to work on anything like that for a while.  I brought the sweater that I'm making for Charlotte with me and haven't even touched it except to show it to a couple of people.

We headed to Milwaukee to pick Ben up from his flight.  It was great to see him and we caught up on the latest news.  Later on, we met Bob and Penny, who had just arrived from Kansas City, at Toby's for a traditional Wisconsin Fish fry.  Bob and Penny really enjoyed the atmosphere - it was quite different from the chain restaurants in their area.   We had a drink and a toast to Mike and lots of great conversation.  The place was so crowded, that we left right after dinner and went to Tully's in Monona for another drink before heading home. 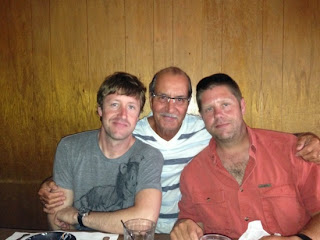 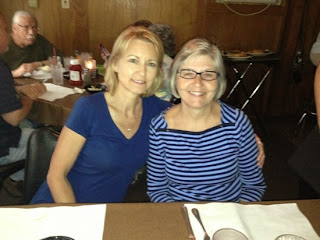 Posted by Bridge Coast to Coast Saga at 12:44 PM