Tuesday, July 1.  The storms were bad all through the night last night.  Just when I thought they had passed on by, a loud series of thunder rumbled off in the distance.  Conditions are terrible with rivers and creeks flooding all around us.  I haven't had too much trouble sleeping but it's definitely been sporadic.
I went to see my cousin, Fran, today and I was a little concerned when she asked who I was - then I learned that it was because of her vision, and she is still as sharp as can be mentally.  She is now the oldest if my cousins still living and she just turned 89.  We had a very nice visit and then it was time for her to go to lunch and we can't be late for that big event of her day.
Before I went back home, I stopped to vacuum out the dog hair in my car and to get a few groceries to have on hand for breakfast and lunches.  Most evenings, I have dinner with Pat and his family.
Saturday, June 5.  Back on Wednesday, after spending the morning doing house cleaning and laundry, I went to Monona to see Tom and Karen.  Frisco and Tara had a great time chasing around and we had a real nice visit and talked about the plan for next weekends memorial gathering for Mom. We went to Toby's Supper Club for dinner and I just had to have an Old Fashioned to toast to Mike and their delicious Lake Perch was my menu choice.  They have own awards year after year for their Lake Perch.
On Thursday, I helped my cousin, Dawn, with some weeding in her gardens.  She lives only a block from Pat, and she has been very ill and unable to keep up her extensive vegetable and perennial gardens.  While I was weeding, Rich went and filled his truck with a yard of mulch and he put down a thick layer when I finished my job.  That will help to keep the weeds down for a while.
When I got back home, I hauled some of the trimmings from Pat's downed tree to the curb, as I learned that the city is having a brush pickup starting next Monday, due to the large amounts of debris left from this weeks storms.  He has a lot more to cut and haul out, then he has to fix the fence.  What a mess!
This morning, I loaded up a few clothes, my sleeping bag and pillow, a borrowed tent and sleeping pad from Pat, packed a cooler and headed to The Land outside of Richland Center.  Mike and I first went camping there with our friend, Tom, back in 1974 and then for 4th of July weekends for about 28 years after that.  We did not camp out there when were visiting here in the motor home, but tried to at least get out there for a visit.  Today, it is basically the same group of friends that gather and the tradition continues.  Tom made his traditional 4th of July BBQ chicken, baked potatoes, corn, and salad for dinner and Nancy provided a Rhubarb cake for dessert.  Peter, Jim, and Eric put on a very nice display of fireworks and we topped the night off with some good old campfire conversation.  What a nice day!
This was the first time I have camped in a tent since 2002 and it wasn't the best nights sleep I've had in a while, although the tent was comfy and I stayed warm and dry and I had the soft sound of water trickling over the rocks in the stream - it was just a different place.  I decided against taking my trailer out there because of the recent heavy rains, figuring it would be soggy and wet out there and I also don't want to tear up Pat's yard by coming and going too much.  I was wrong, it would have been just fine at the land. Peter keeps it so well groomed that the thick grass now helps to keep it from getting too muddy. 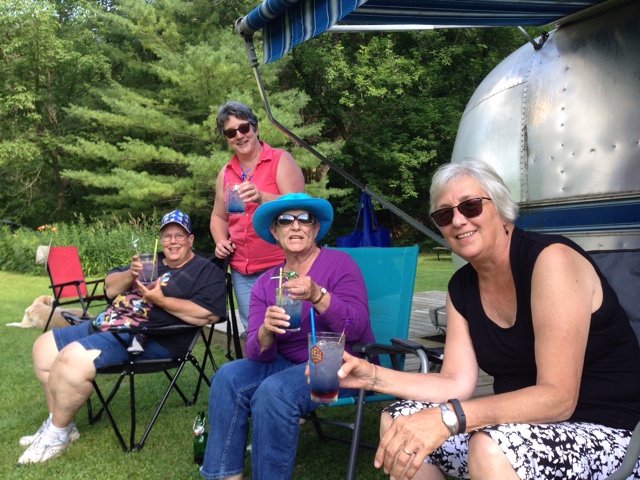 Red, White, and Blue Cocktails for the ladies - Jane, Nancy, Linda, and Leslie 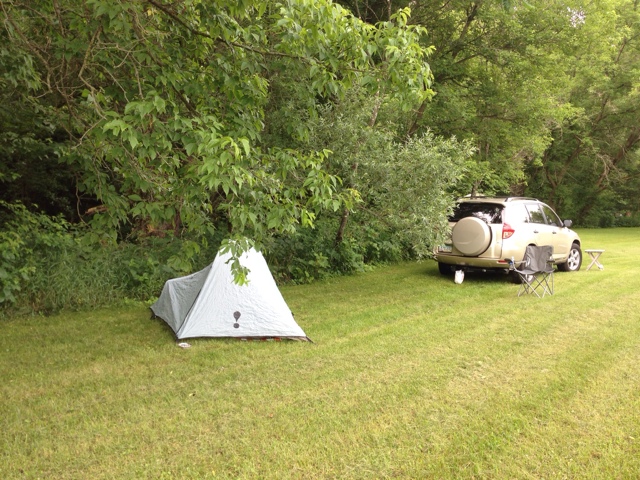 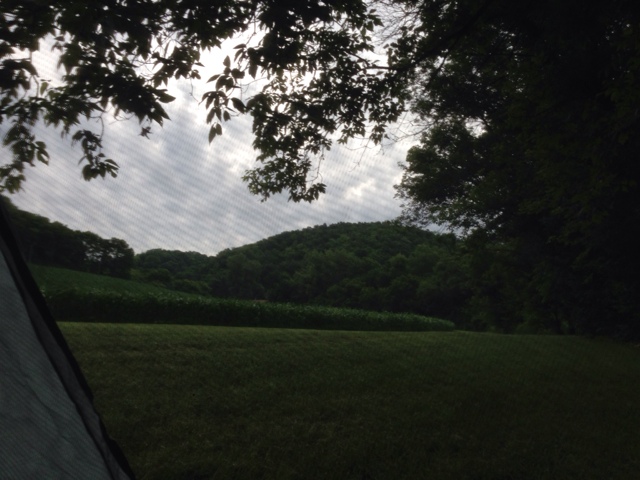 Early morning view from my tent.
Saturday, July 5.  I packed up and headed back home early this afternoon and had to make several stops along the way to wake myself up and to try to get a call through to Pat and Roger who were camping nearby at Spring Green.  Unfortunately, I had no cell phone signal and was unable to connect with them.  The first thing I did when I got back home was to take a nap.
Sunday, July 6.  We all worked to haul the brush from the trees that fell over Pat's fence last week.  It turned out that he had help cutting it up on Friday but they didn't get it hauled to the curb.  What a mess.
The fair in Stoughton ended today, and it is only a few blocks away, so I got to watch the fireworks from my bed tonight.  It was a nice show!
Posted by Bridge Coast to Coast Saga at 5:02 AM