Wednesday, October 15.  It has been a busy week and I am getting back into the "home in Arizona" routine.  My morning walks include meeting up with the other regular walkers and their dogs in the cool part of the day.

I had my annual vision checkup on Monday and learned some ways to keep my eyes lubricated and also learned that I have cataracts forming, the right eye is worse because of the location of the cataract, but it still doesn't require surgery.  I am sick and tired of the frames that I have, so will be shopping for new glasses soon.  I am definitely returning to Costco for glasses as I have been 100% satisfied with my last prescription and frame.

Yesterday, I started training for my part-time job at Mesa Spirit RV Resort.  They are willing to give me the hours that I want (Monday-Wednesday, 6 hours/day), although I will be paid minimum wage.  The convenient location makes it worthwhile in my eyes.  Training went well and I think I will be able to learn the new reservation program fairly quickly.

Connie called me this morning to see if I was interested in going to see the movie, "The Judge", with Robert Downey, Jr. and Robert Duvall.  Five of us went and it was a good but very sad story about a successful lawyer who returns to his hometown when his mother dies, and he discovers that his estranged father, the town's judge, is suspected of murder. He reconnects with his brothers that he walked away from years before, although the relationship with his father is pretty sad.

After the movie, Arlene and I went to Costco so I could look at glasses frames and restock the club house supplies.  We had a cocktail together when we got back home.
Friday, October 17.  This month is flying by, I guess it helps that I have been staying busy.  I went in for more training on Thursday, but they didn't have a lot of actually reservations for us to work with and the training module wasn't cooperating either.  I think that after a few "hands-on" entries, it will come back to me, even though the program is a little different.  We have talked about a lot of familiar things.
I went to a few estate sales this morning, got a few things done around the house, and then went to TGIF to socialize with neighbors.  As usual, it was a good time.
Saturday, October 18.  This evening, I joined Nan and Dale for dinner and then we all went to see "1964: A Tribute to the Beatles" at the Celebrity Theater in Phoenix.  It's good to see them again, after a long summer away.  As we were going to our seats, Nan slipped on something and fell - she seemed ok but was getting stiff and sore as the night went on.  Our seats were good, as was the show, with the stage in continuous rotation.  I'm usually not a big fan of tribute bands but these guys have been doing this for 31 years and weren't bad.  It definitely brought back memories of my late teen years. 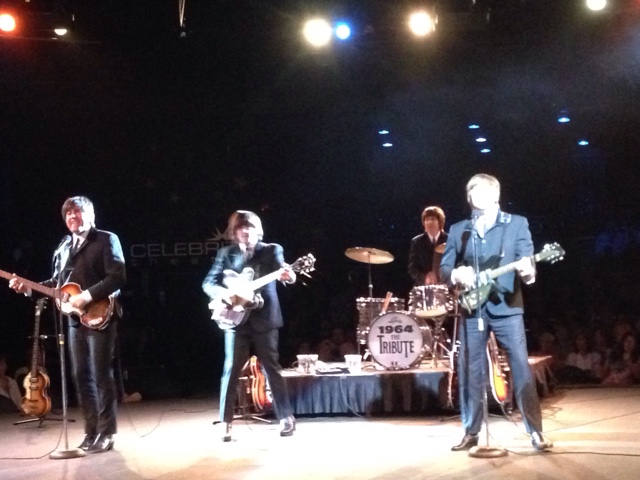 Sunday, October 19.  When I passed the clubhouse this morning, I went in and stood on the scale - it is truly time to get serious about taking some weight off.  I have been really good about not eating bread, pasta, or sugars but more has to be done.  So, when I finished my walk, I did a half- mile Walk Away The Pounds.  It's a start.
Diane invited me to her house in Queen Creek for a brunch/Packer party, so I headed out there.  She lives right at the base of a mountain (not sure which one) but it is a beautiful setting.  I met several of her friends, had a great breakfast burrito and chatted for a while before heading back home to get some things done around the house.
Diane, her granddaughter Ava, and horse, Tiana. 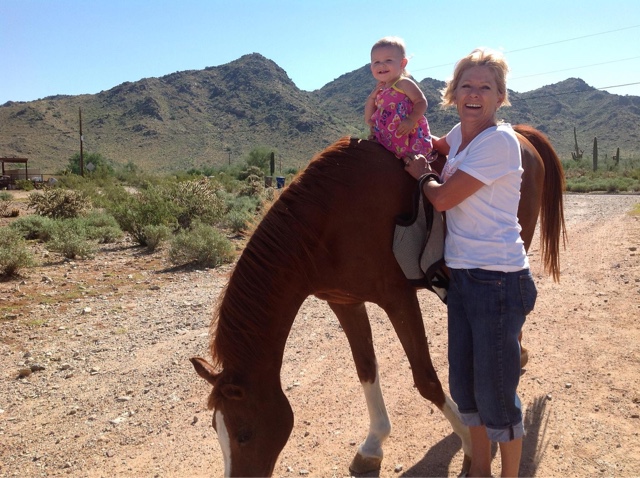 When Connie called to say that she and a few other folks were heading to the pool, I went to join them.  It was nice to just hang out and relax in the pool for a while and chat with Connie, Jeannie, Bill, Vicki, and Kathy.
The sky has clouded over and was rumbling with thunder, but I don't think it brought us any rain.  I was having a phone conversation with Ben while the thunder was going on, then there was a show of fireworks off in the distance, so Frisco was adding his sound effects to the evening.  The sky was gorgeous! 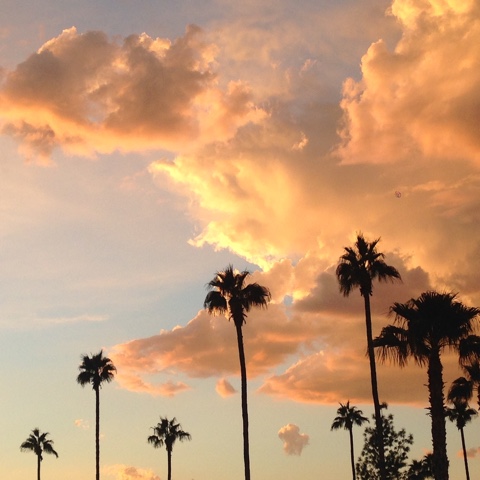 Posted by Bridge Coast to Coast Saga at 8:20 AM