Monday, May 25.  Happy Memorial Day!  I thought a lot about all those who have served our country and also of family and friends who have passed away - it's sad that there are more on the other side now than here on earth.
I left Jonnie's house this morning at about 8:15.  I decided to avoid I-75 and take state roads and after a long day of driving, I wish I wouldn't have.  It was mostly 2-way roads, through many small towns and not much to see in between.
The RV park that I had decided to stop at was kind of scary looking, nothing like how it was described in the book and there weren't a lot of options in this area.  I looped right through and got back on the road, but I was looking at another 90 miles to Augusta.  Twenty miles into the drive, I spotted a sign for Boss's RV Park in Wrens, pulled in, and it looked ok - some travelers hooked up, not just long term units and workers - so I self-registered, picked a site, and got set up.  After dinner there was a knock on my door.  It was the camp host bringing me a receipt and the wifi password.
I talked with my brother Randy and learned that I will be a great Aunt again.  His daughter, Ali and her husband James are expecting their first child in late November.  Yay!
It's 9:30 pm and some crazy farmer is plowing the field across the street in his very large and very loud John Deere tractor that is lit up like a football field.  I was just starting to doze off when I hear the engine and thought it must be a big rig pulling into the park.  They must plow at night because it's too hot during the day - that's my guess.  I hope I can sleep.
Tuesday, May 26.  The plowing stopped after a while and I was able to sleep pretty good.  Since I only had a few hours to drive today, I took my time getting up and moving.  Regardless, I was on the road by 8:30.
It was a beautiful drive through the Sumter National Forest and along Strom Thurmond Lake and across the Dam.  The road was narrow most of the way but not a huge problem because I had it to myself most of the time.
I got to Tom and Karen's house in Anderson, SC about 11:15.  These are friends from Madison that we have know since 1977.  I worked with Karen and Tom built Mike's birch bark canoe that he received as a perk from his boss.  I got settled in, chatted a bit, and then Karen and I went to have lunch at this cute little cafe downtown.  There I learned more about Tom's cancer - it is not Lymphoma, which he has had 2 bouts of, but he now has Pancreatic.  He had massive surgery and now has only a small amount of his stomach left and has to eat about every 2 hours because it can only hold one cup at a time.  The good thing is that he can eat anything he wants and tries to get about 3,00 calories a day.  He is getting "light" chemo treatments and feels pretty good, having several short periods during the day when he can still work in his shop where he builds and repairs canoes. 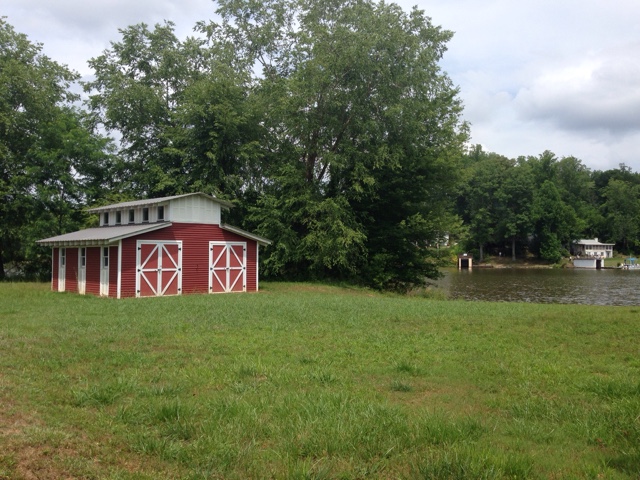 Broadway Lake and Tom's Canoe Barn
We talked about lots of stuff, like people we knew from working at Hazleton, familiar places like Wisconsin and Minnesota, our families, and w caught up on the last 7 years since we had seen each other.  Frisco and I took a walk down by the lake.  Then tonight, after Tom had his dinner, we went to nearby Bartel for a yummy Margarita and a light dinner.  Karen has been looking forward to my visit, as she doesn't get away for meals very often and I just had to help her out on that front.
It rained tonight and cooled down to mid-60s.  It felt so good to not have to run the AC or a fan.  I could just listen to the sounds of nature all night long.  Actually it is really quiet.
Wednesday, May 27.  I had only a 3-hour drive to Susan's (a classmate from Stoughton) today but it was not a pleasant one.  I should have followed my instincts and found a route that went north of Atlanta but I didn't and I followed the GPS instead. It took me just north of the city on a bypass but the traffic was horrendously busy and quite stressful.  I made it and  got settled in their driveway for the night.
She and I sat on the porch and Frisco got to run around the yard.  Their yard abuts a school playground that is huge and surrounded by dense woods, so he was quite happy.  We talked and talked and talked until Dean got home from work and we talked until bedtime.
Thursday, May 28.  Susan led me through the back country roads to a road that would get me to the west side of Chatanooga, avoiding the drive through the city.  I decided to take the scenic route and went wet to Huntsville, AL and then north through Fayetteville and Shelbyville, TN.  The drive was very scenic, most of it 4-lane and I was following a road that was walled on both sides by dense, green forest.  It almost felt like going through a tunnel. I was only 10 miles from Lynchburg, TN but had been there for the tour of the Jack Daniels Distillery in the past so I didn't stop. When I got to Nashville, I followed Susan's suggestion to get around the east side of the city because of construction and lane closures.  Thanks much, girlfriend!  Because I took the scenic route, I was on the road for an extra 1.5 hours and very tired when I reached my destination.
My stop for the night was at the KOA in Calvert City, KY, not far from Paducah.  This is a beautiful area too - The Land Between The Lakes.  The park is very nice and rustic and my site overlooks 2 small lakes and I'm hearing Cicadas and bullfrogs and lots of birds singing.  That is except for the highway noise, so I kept my AC on through the night to block out that sound. 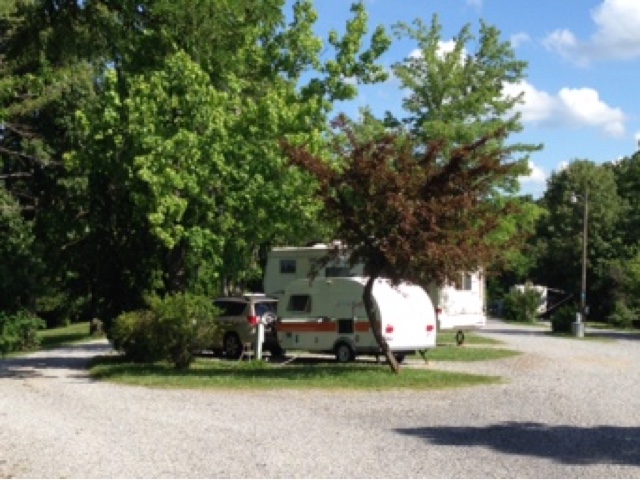 Friday, May 29.  There's not much to write about today, other than the excitement is building for my arrival at Pat's house tomorrow.  I probably could have pushed it today, with only about 230 miles left to go, but being on the road for 6 hours is long enough.
I settled in at the D & W Lake RV Park in Champaign, IL a very nice place along a small lake with lots of trees and well kept grounds.  As soon as I got set up, Frisco and I took a walk around the lake and we saw some familiar "up north" items:  beautiful red peonies and bright yellow iris and a Canada Goose. 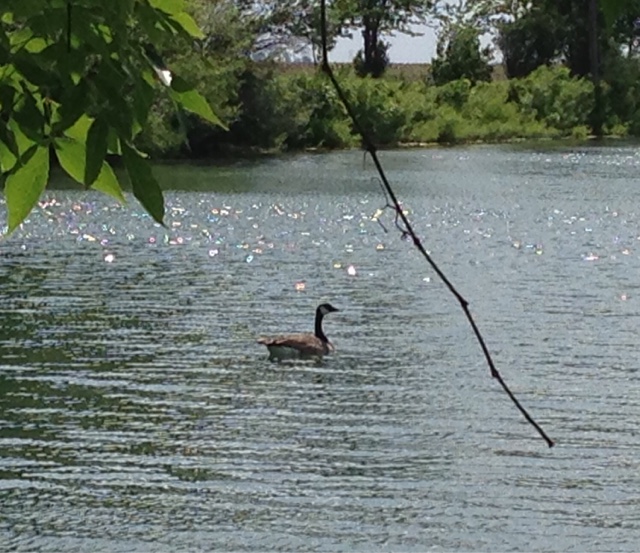 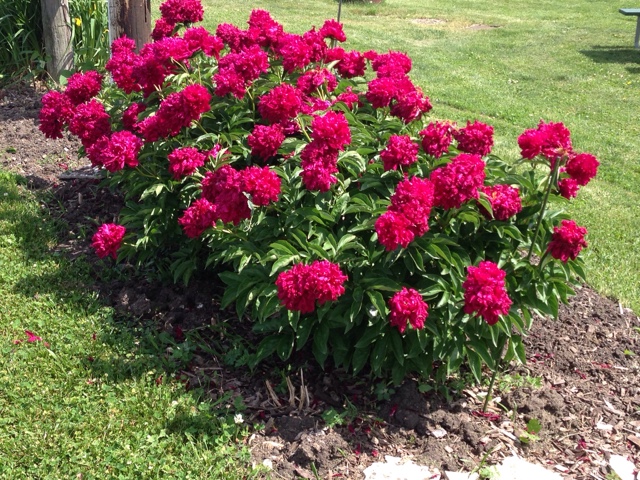 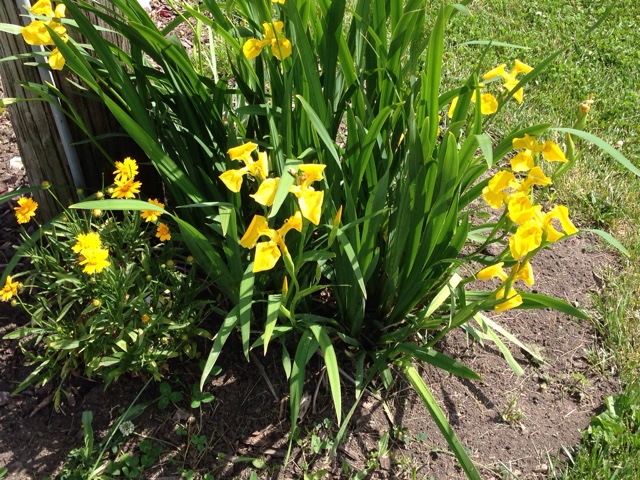 I took care of my tanks and put that stuff all away as they are calling for rain tomorrow, maybe for the entire drive.  It has been windy and feeling like something is blowing this way.
Sunday, May 31, WI.  And rain it did, much of the night and off and on Saturday morning.  I managed to get Frisco for a walk and the electric and water hoses put away before it started up again.  Shortly after departing it started to rain and continued until about 3:00.
My windshield wipers were acting up again, so at my next refueling stop, I asked a couple of men that were chatting in front of the store if they knew anything about wipers.  They were convinced that I had the wrong size blades, as one was catching on the other when they activated.  I did a search on my phone for the nearest O'Reilly Auto Store and there was one about 30 miles up the road, in Bloomington, so that is where I headed.  The very nice saleswoman was familiar with problem, checks their information and agreed - the blades were too big.  She replaced them with an upgrade at no cost to me, installed them and watched to make sure the worked as they should.  It is so nice when you get great customer service.  I think I will write and thank her.  I had pouring rain all of the way to Stoughton, but my wipers worked like a charm.
It was only 52 degrees when I arrived and will be dropping down in the 40s during the night.
Boy, did it feel good to see and to hug my eldest son after not seeing him for 9 months.  We talked and had a bite to eat and watched the rain continue for another couple of hours.  Once things dried up a bit, I backed the trailer into the yard without making too much of a mess - one divot where the ground was soft but we took care of that today.
I had to run my furnace during the night - I just couldn't get warm without it.  Frisco even joined me on the bed, which he usually doesn't do.
We putzed around the yard today, moving and splitting plants, patching up the fence so Frisco couldn't escape but he escaped anyway and that led to more patching up of fences.  There are so many rabbits, squirrels, and chipmunks here that the temptation to chase is just too great for him - he is on a mission when he sees or gets on the scent.
Tracey got home from a weekend escape with her Mom and we had a very nice dinner together this evening.
Posted by Bridge Coast to Coast Saga at 4:23 PM