Tuesday, December 1.   An early walk with the dogs helped us to learn more about Old Town San Diego and the history there, in fact, we had the place all to ourselves, not a soul around there at 7:30 am. The neighborhood is set on a hillside with historic homes and shops, beautiful chapels and churches surrounding a plaza. 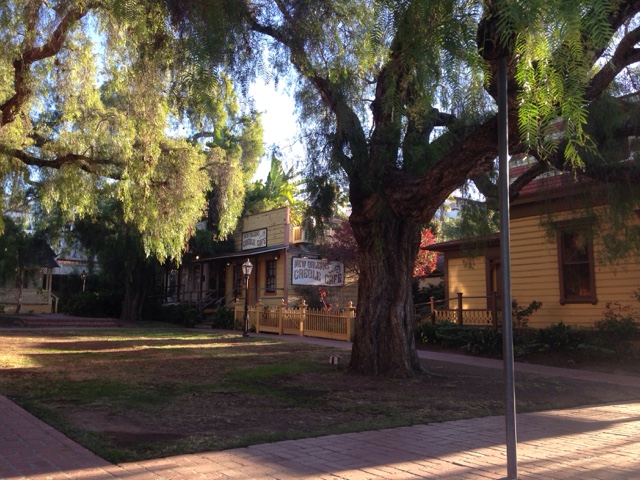 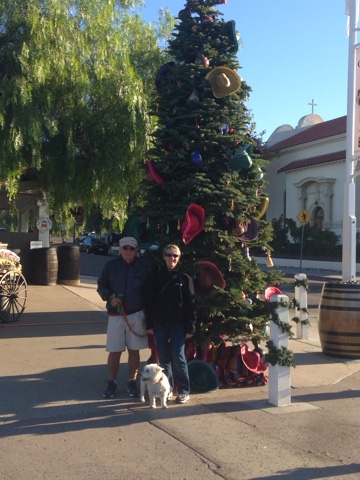 I've never seen a Christmas tree decorated with sombreros before.
When we finished our walk, we headed for a drive along the coast through the neighborhoods of La Jolla, stopping along the way to appreciate the views of the coast, surfers, and the famous seals at the Children's Pool Beach.  It felt so good to feel the ocean air again, good for my soul. 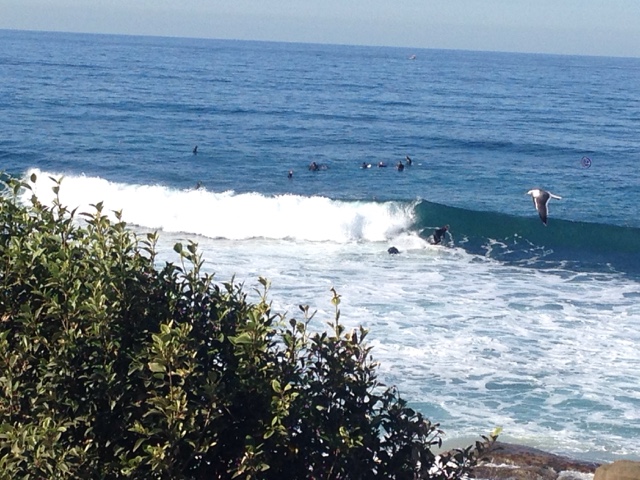 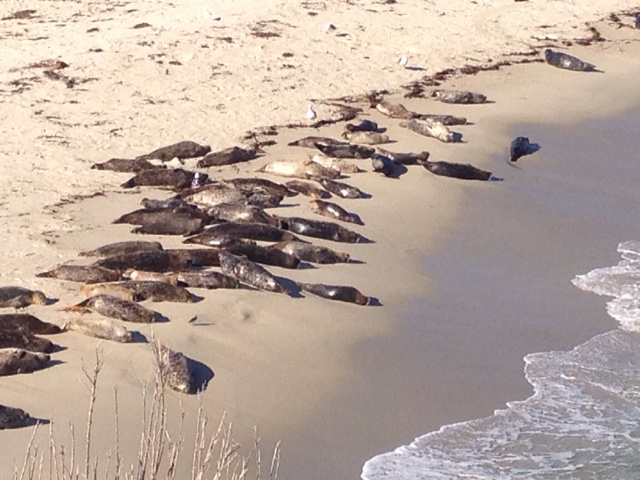 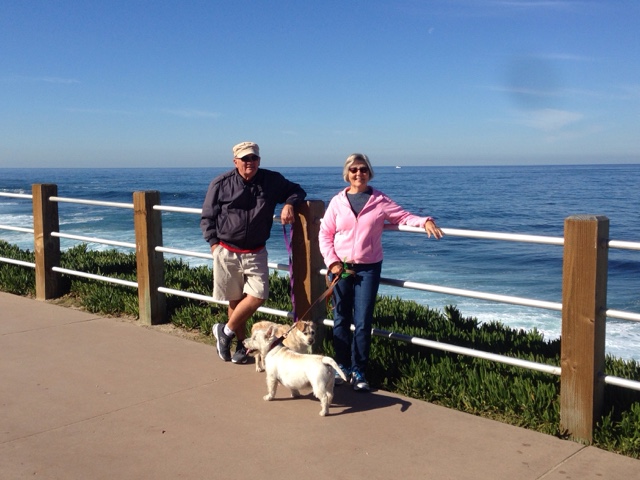 We took the dogs back to the hotel figuring that they would need a little break after all the walking we had done and then we headed to the Embarcadero.  We strolled along the walkway and saw the USS Midway, a giant of an aircraft carrier that was active in World War II and the Vietnam War, then retired from service and made into a museum.  I really liked the statue of the sailor and his girlfriend kissing, on his return from duty in World War II.  A handsome sailor in uniform, walking towards us, brought a tear to my eyes, remembering my handsome sailor and love of my life. 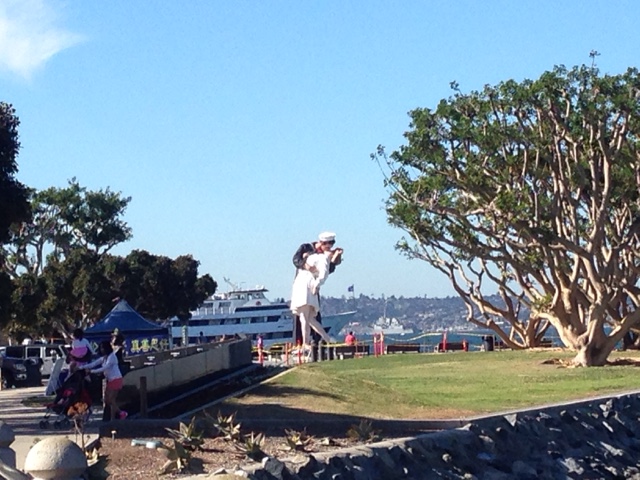 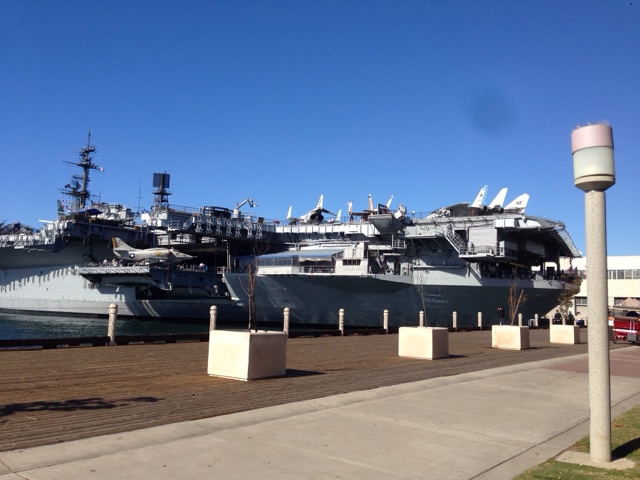 We had lunch at Anthony's Fish Grotto, in business since 1946, and had a delicious shrimp dinner and a yummy Bloody Mary with a view of the Bay.  It can't get much better than that. 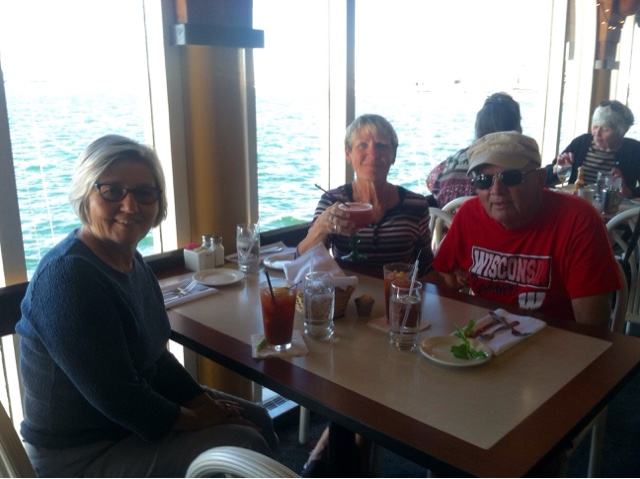 We had some downtime when we finished sightseeing and lounged around the hotel for a couple of hours before walking back into Old Town for Taco Tuesday and Happy Hour Margaritas.
A full day of exploring and enjoying.
Wednesday, December 2.  We got moving pretty quickly this morning, as we were headed for Yuma and Algodones, Mexico today.  Our motel room wasn't ready when we got there so we headed for Gateway Park for a snack and to give the dogs some walking and exploring time.  We got s real scare when Louie headed down the embankment toward the canal and jumped right in.  Pat scrambled down, slipping along the way, but she managed to grab him by the collar as he scrambled to get his footing along the edge.  That woman has good reflexes and handled the situation like a pro - saving Louie from a potential disaster.  SCARY! 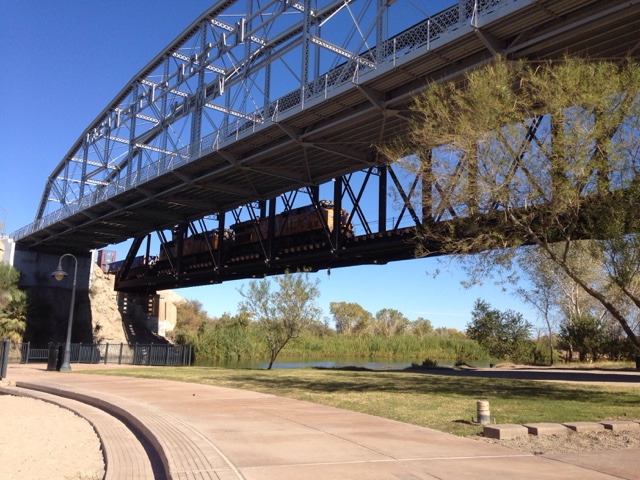 When the hotel called to say that our room was ready, we dropped the dogs off and headed into Mexico and their endless dental, vision, and pharmacy shops and salesmen toting their leather goods, ceramics, jewelry, hats, and clothing. There was constant heckling to look at the wares and barter for the best price.  The only thing I bought was allergy pills, ibuprofen, and vanilla.  Pat and Rog bought some medications and booze and did some research on dental care.  We had a margarita and a bit to eat before heading back across the border.  I was a little concerned that I might have some trouble coming back into the US with my passport as it expired today, but no problemo.
The hotel offered happy hour with 2 free drinks and also had hot dogs, coleslaw and beans, so we were good for the night.
Thursday, December 3.  We were back home by noon today and it was a chilly 52 degrees in my house when I arrived.  Brrrrr!  A nice 75 degrees outside.  I just got settled back in when Connie called to ask for a ride to where her Grandaughter was having trouble with her car, it wouldn't change gears.  We got there and she called AAA and the guy got it going for her so she could make it to the repair shop and I followed her there.  I let her use my car for the evening, as her daughter is visiting and they had plans.  I hope it is an inexpensive repair for her.
Friday, December 4.  Happy Birthday to my youngest brother, Russ, today.  Unfortunately, he is in reachable because he is homeless in Cedar Rapidw, IA.  I can only hope that he is safe, warm, and maybe made contact with another family member today.  So sorry for his circumstances, so praying that he asks for help some day his willing to make a major lifestyle change.
It was a fun afternoon, happy hour at Val Vista Village brought together a group of friends from up north that live in another nearby park.  The Calico Kid was the entertainer and played a lot of tunes that Pat, Jeannie, and I danced to.  We even got Norm to do a jitterbug with Pat and a buckle polisher with me.  Good time! 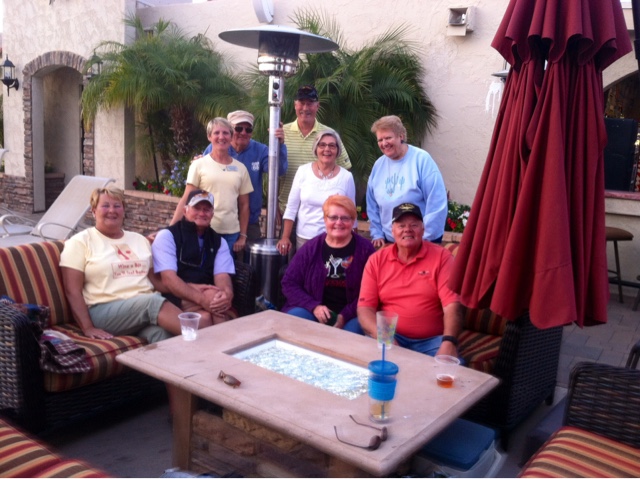 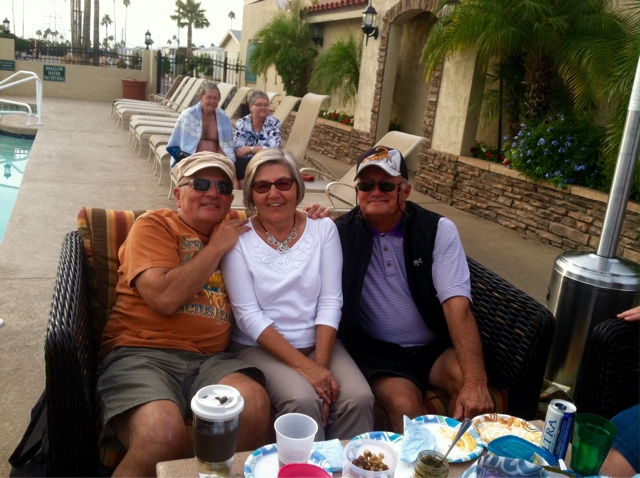 A Rose between Two Thorns?  Good friends, Roger and Gerrie
Sunday, December 6.  Last night was Connie's surprise birthday party at her son Anthony's house.  It was pulled off without a glitch and she had not a clue.  Her daughter, Donna and granddaughter, Michelle, arrived from New York last Wednesday so she thought they were meeting st Snthony's house and then taking her out to dinner.  Her son, Frank and his girlfriend Sally got in from there last night and she was happy and surprised to see them.  Thirteen of her friends from our community also attended.  We all celebrated with salad, bread, lasagna, wine, and of course, birthday cake.  It was lots of fun and she was one happy girl.  We all pitched in and gave her a money tree with $5 bills totalling $75 - it turned out really cute and took several of us an afternoon last week to make it. 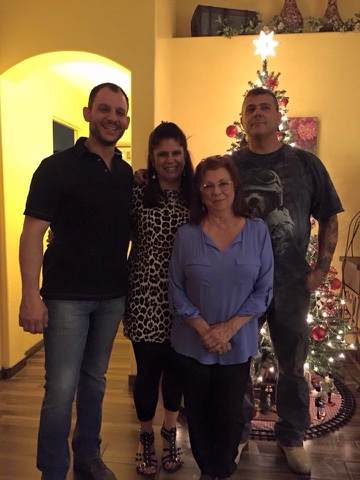 The birthday girl with Anthony, Donna, and Frank. 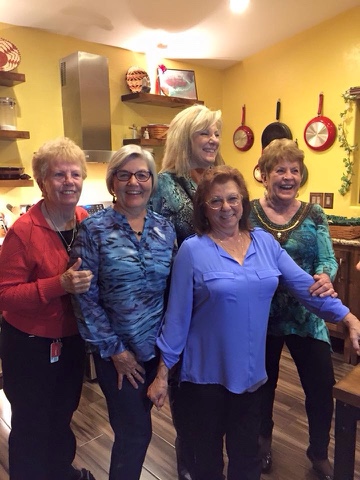 Loretta, Me, Kathy, Connie, and Jan
I slept in this morning, as Frisco had me taking him out several times during the night.  I could hear him pacing the floor and he would sit in the doorway and look at me, so I'd take him out and all he did was sniff and pee.  Finally, at 3:30, there was some action and he managed to get rid of what  as bothering him - I think it was too much of a bully stick that upset his stomach.
I made a crock pot full of Ham and Bean soup and then took some over to Kirk and Al across the street and also gave some to Tom next door, and there is still enough left over for 3-4 meals for myself.
Posted by Bridge Coast to Coast Saga at 2:58 PM