Thursday, December 15.  The weather this week has been beautiful, mid to upper 70s during the day.  I've been keeping the furnace at 62 during the night and it hasn't even come on, although I have been warming it up a bit in the morning.  Starting tomorrow, the temps will drop down in the 60s during the day.
My Christmas shopping is done.  I have 2 beautiful boxes of oranges ready to go north to my son's but I'm holding off until Saturday to ship them.  They are getting frigid winter weather with heavy snow followed by single digit temps and below zero wind chills.  I was just dreading the long lines at the post office, checked online and learned that I could print the labels right here in the comfort of my home and just drop the packages off when I'm ready.  Yay!
I had a house guest on Wednesday when Pat and Rog dropped Louie off for the day, as they were taking a bus trip to Prescott.  He and Frisco are good buds, so there was no problem there at all.  I spent the day giving my house a good cleaning, much needed.  I think I'm a believer when they say that if your job is to do a certain task, then you don't want to do that task much at home and I think I have been slacking on the house cleaning activities at home.  The wood furniture all got a good treatment with lemon oil and even the window sills got vacuumed off.  It's looking and smelling pretty good around here.
There was a happy hour gathering at Nando's on Monday night, about 14 people got together  to celebrate some recent birthdays and anniversaries.  It was a great time and the margaritas tasted really good, especially since I wasn't the designated driver.
The last HCC board meeting for 2016 was held on Tuesday and we amended the by-laws and elected a new President and Vice President for next year. It's going to be interesting and I'm hoping for some positive changes around here and maybe even a younger perspective at activities and involvement.  We are responsible for the activities around here and Kathy does a great job at it.  There was good discussion with the exception of some very heated exchanges and even name calling at one point - come on, folks, were adults around here.
I got some new photos of the kids this week. 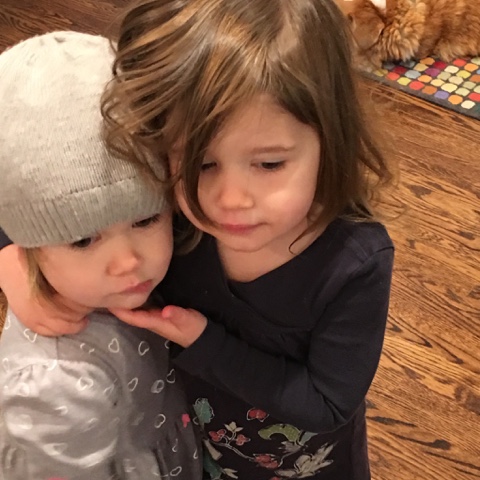 This is so darned sweet. They are always loving on each other. 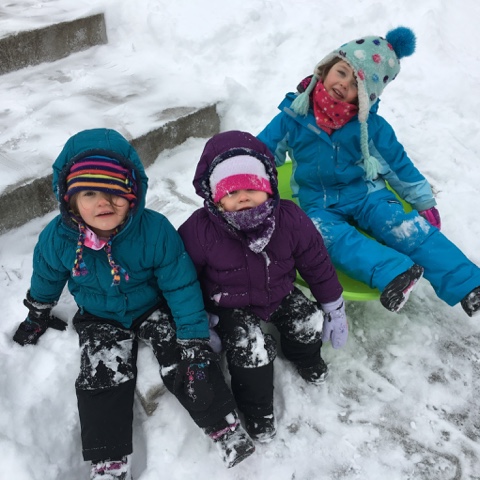 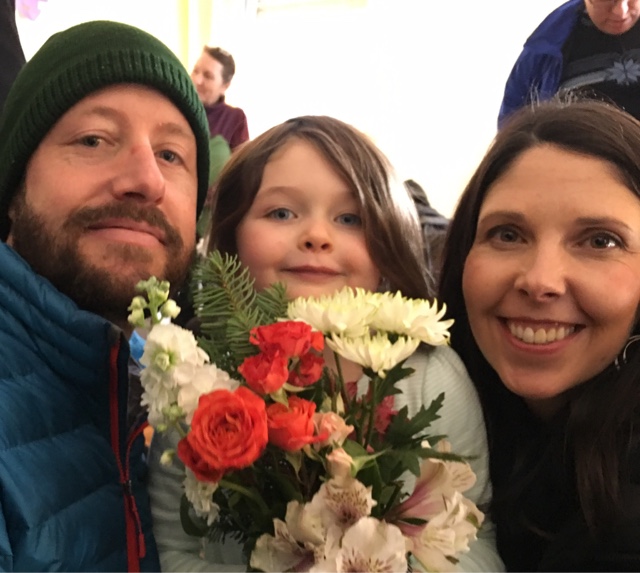 After Charlotte's school performance.
Saturday, December 17.  Fish fry last night at Tom's BBQ was excellent and I think it might be the best that I've had here in the valley.  It was good a enough to take home for me to eat rather than giving it to Frisco. Now, that is saying a lot.
Today, Tom (next door neighbor) and I went to visit another neighbor, Kirk, who has been in the hospital for a month now and is facing another 4-5 weeks, followed by a recovery/rehab program either from his home or from another facility.  He was seriously injured as a child and lost the use of his legs.  Due to infection earlier this year, he has had to have several surgeries to remove some of the femur on both legs.  The guy is in exceptional spirits and has more determination to recover and get back to his independent life than anyone I have ever met.  I took him popsicles and some of my potato soup - just got a text saying he really liked the soup.
I finally did some of my baking - several small loaves of Cranberry bread to give as gifts. Feeling relieved to have that out of the way. Gifts and cards have all been mailed - I'm pretty close to being finished with Christmas preparation.
Sunday, December 18.  Connie and I went to see the movie, "Loving", the story of Mildred (black) and Richard (white) Loving, a couple who grew up in a mixed neighborhood in Virginia.  It was nothing for them to fall in love and, naturally, get married when she became pregnant.  Unfortunately, Virginia had a law that didn't recognize their marriage and prohibited them from living together in that state.  The ACLU became involved and, after several years, their case went to the Supreme Court and they won.
I knew the story after hearing Nancy Griffith's song, The Loving Kind and also read about It when Mildred died back in 2008.  It touched my heart.  Another sad but true story that has you scratching your head and wondering how something like this could ever happen in this country.  You love who you love and it doesn't matter where they come from, what they look like, what sex they are, or anything else - why are we so closed minded and prejudiced?
Posted by Bridge Coast to Coast Saga at 7:40 AM