Monday, February 12.  I had 2 brief walks this morning, taking the kids to school and bus stop. Damn, it's cold!  Zero degrees is damned frigid cold.  Jill loaned me one of her coats and and I was wearing hat and gloves, but my face felt stiff and frozen, then my knees and feet started feeling real cold, and this was just walking Norah and Camille to their school, only 2 blocks away.

Tonight was the scramble to get them all to swimming lessons and back home and tucked into bed.  Jill fed the kids quesadillas and oranges in the car on the way there and they got bananas on the way home.  It was testing night and Camille and Norah moved up to the next level but Charlotte needs to improve her skills a bit more before she moves on.  She loves the water but it is all a matter of coordination with her. We were eating nachos for dinner at 8:30 and it wasn't long after that when I went to bed.

Tuesday, February 13.  Well, it's been 5 years since Mike passed away and I got my cry in this afternoon.  Damn, it wasn't supposed to be like this.  I'm going to look at photos and bring back memories of the years we had together.  I feel good that I have been able to move on and make the most of my life and I am in a happy place - I know that he would want that for me.  And now - I'll get on with the rest of my life. 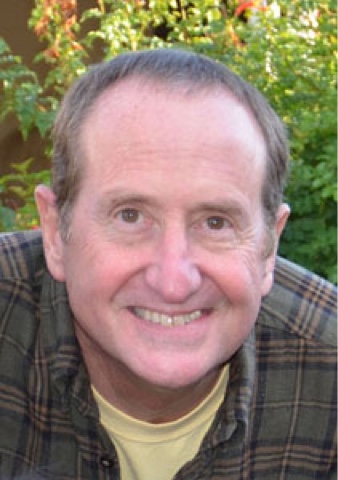 I used Ben's van to run some errands today - the DMV for updated license, tags for the trailer, pick up a prescription, and get some things at the grocery store. The temps have risen to 30 today but it still felt cold because of the wind.  A high of 40 is expected tomorrow.

Thursday, February 15.  Well, we survived the anniversary of Mike's death and celebrated by having a conversation with Pat, receiving 60+ posts to his photo on Facebook, and watching the slide show of his life story that we shared at his memorial service.

The girls were all excited about Valentine's Day and came home from school with boxes full of them and Charlotte's was full of candy.  I add a pot of Zuppa Tuscana for dinner and it went over well, but not quite as well as the last time I made it.  That might have a bit to do with the candy that they ate after school.

Ben took the day off today, he actually has the next 5 days off, and once we got the kids all off to school, he and I headed to Rustica Bakery for a coffee and pastry.  Our destination was the Frederick R Weisman Art Museum on the U of M campus.  The building itself is unusual, a stainless steel and brick building designed by architect Frank Gehry. The paintings on display were made by local artists and there was a gallery with works depicting "Vanishing Ice" that made me feel sad, knowing that global warming is real and this brought it all home.  There was also an exhibit of photos of Prince and a few of his personal items. 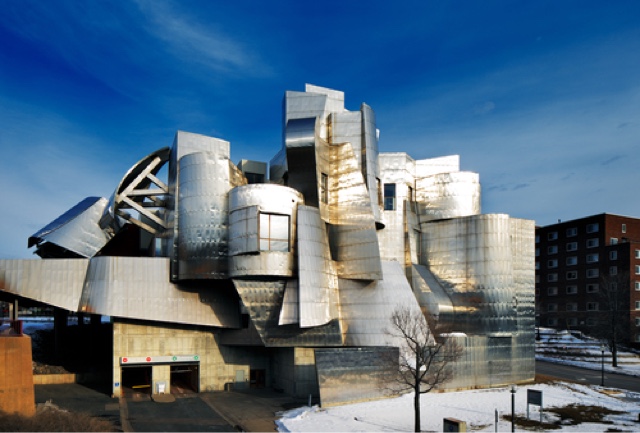 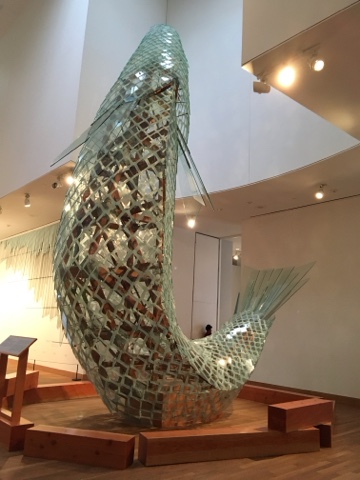 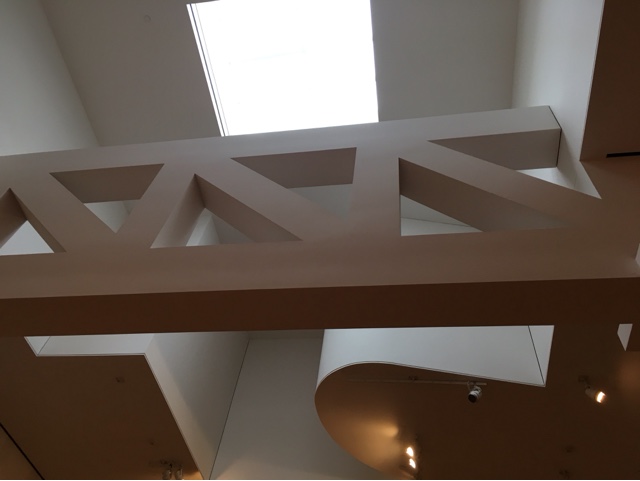 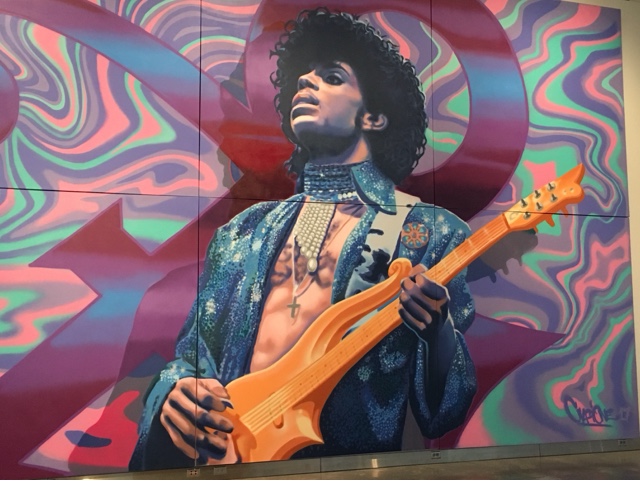 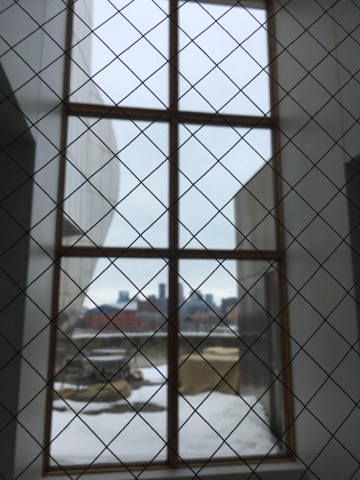 From there, we headed to the Foxtone Music Company where a very friendly guy named Wes talked with us for a long time about creating electronic music and sound waves and the equipment used to create it.  Much of it was way over my head, but I found it to be interesting and it's a topic that Ben has a lot of interest in.

After that, we went to Minnehaha Falls so I could see them in their frozen state.  The weather has been in the 30-40 degree range yesterday and today, so there was water moving but the Falls themselves were all ice. 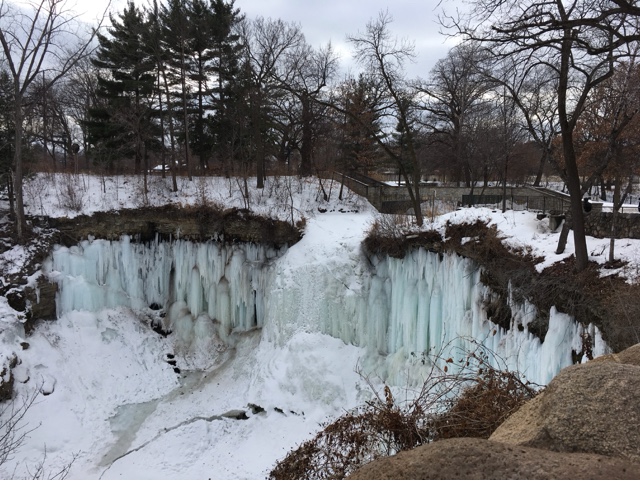 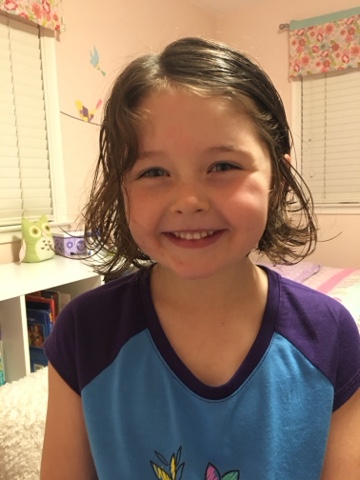 Friday, February 16.  Happy 41st Birthday to my youngest son, Ben. He and Charlotte both had the day off, so we were able to spend it together. I let him sleep in and got up early to do his morning chores, like make Norah and Camille's lunches and breakfast, get the coffee going for Jill and I, and empty the dishwasher. Jill dropped the girls off at schooled once Ben got up, we headed to Rose Street Patisserie for a yummy pastry and coffee. 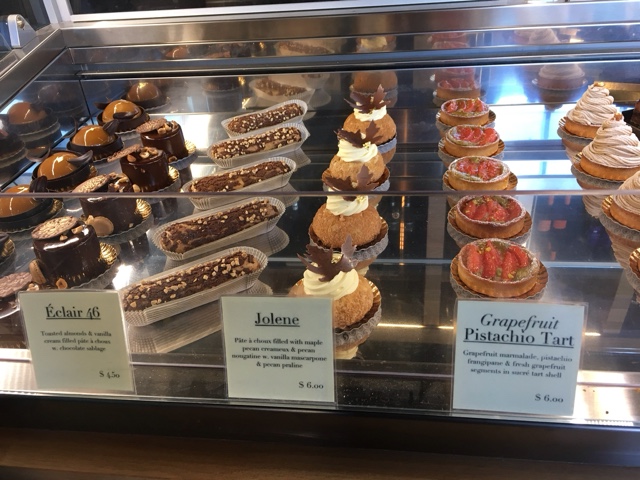 Our next stop was the Bakken museum, the world's only library and museum devoted to medical electricity. I learned a bit about the condition in my heart called a left bundle branch block, the part of the heart that controls the electrical signals that tell it to beat.  There were several hands-on displays that demonstrated how electricity worked and some that generated a slight shock.  There was a Frankenstein's Laboratory display that featured the author, Mary Shelley and an animated version of her telling her story, plus several other interactive displays.  Charlotte also like the Ben Franklin Laboratory. We played a cool Mind Game where two people tried to get a ball through a tube by using brain waves.  My brain was way too active to have much control and Charlotte and Ben both beat me at it.  It made me think that I should work on some relaxation techniques.

They hired a babysitter for tonight so Ben, Jill, and I could go for it for a nice dinner and it was truly enjoyable.  It has been so long since we have been able to do that.  We started at Salut for an Old Fashioned to toast Ben's birthday and in memory of Mike, then headed to Book Club Restaurant for dinner.  We shared a plate of Mussels for an appetizer andI had the steak salad that was a generous serving of assorted vegetables, pickled green beans, a nice hunk of Blue Cheese, and a tasty vinaigrette dressing.  For dessert, we shared a bread pudding.  It was such a nice evening.

Saturday, February 17.  Norah, Charlotte and I teamed up and made my Apple Oat Crisp for Ben's birthday party this morning.  After Charlotte's gymnastics class, we hung out at home for the rest of the day, working on art projects and party decorations.

I learned from Rita that my latest great-nephew was born in Kansas City, the first son of my niece Ashley and Cher husband Chase. I haven't gotten any other details yet.

Ben made a yummy dinner of spicy shrimp, rice, and roasted broccoli and then we had the apple crisp and ice cream for dinner.  And then the party started!  The party ball (strobe lights) was turned on and the dance music turned up and we all danced and had a balloon fight. What fun! 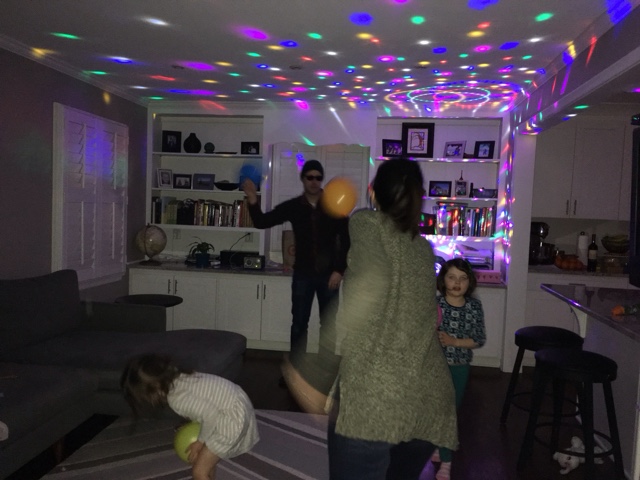 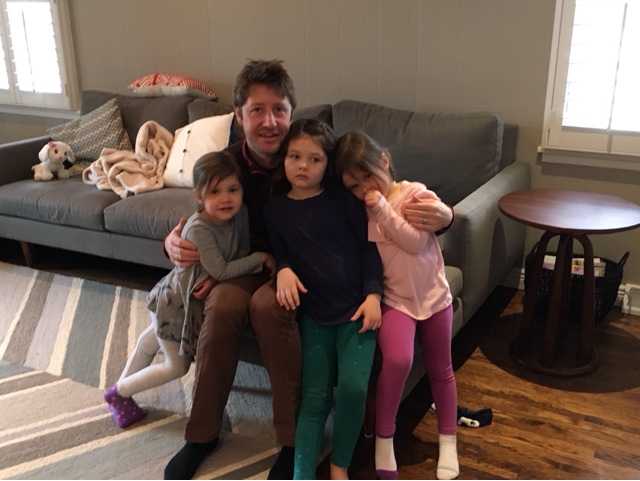 Sunday, February 18.  Ben and the family went to an indoor water park and I opted to stay home and do my laundry and get organized for my trip back home. It was kind of nice to have quiet time.  We spent the rest of the day hanging out at home and taking it easy.

Posted by Bridge Coast to Coast Saga at 6:57 PM