Monday, September 23.  Today is the anniversary of my engagement to Mike back in 1967, as we were parked in his 1958 Chevy Impala in the driveway of the Starr School.  Romantic, huh!  We had been dating for almost a year and he would be heading off to Long Beach for 2 years of active duty in the Navy.   It sure didn't matter to me because I was up for it and he had picked out the most beautiful ring with the help of my older sister, Rita, who worked at Condon Jewelers on State Street in Madison at the time.  Needless to say, we had to run around to make the announcement to various family members that night.

Back to today.  Allan and Sharon came over for coffee this morning as a plumber was coming too.  The verdict is that my hot water lines to the bathrooms should be replaced - there is no other fix - for a cost of about $2300.  All of the current lines are 3/8" galvanized pipe that is corroded on the inside.  Apparently, the main line into our community is partially to blame but the owners refuse to do a thing about it.  Secondly, they used poor material that only lasted for 30 years.  I was glad to have Allan here, as he agreed with what the plumber had to say.  I will get another estimate before I go ahead with the repair.

We had a cool night last night - near 60 degrees - so I had windows open and no AC running.  Yeah!
Wednesday, September 25.  I had a dentist appointment yesterday and when I showed up they told me that it wasn't for a cleaning (last done on May 7) but was for X-rays ($225.00) to determine if my bone was strong enough for an implant.  I didn't remember the reason for the appointment and haven't even fully decided if I'm going to get the implant.  I probably will at some time in the future, but have also considered a trip to Algodones, Mexico to have it done.
I got a second opinion on my water problem and this guy's plan was the same as the previous guy, but his quote (not estimate) came in at the same price but included replacing all of the water lines (both hot and cold) with the same material.  $2,400 for 2 guys working sbout 10 hours and including all if the materials.  Needless to say, I gave him the job and it will be done next Monday.  I think I will shop this weekend for new faucets for the entire house - no plumbing issues to worry about in the future.
Today was my annual physical and all was good with one exception - she told me I have a slow heart rate (45 and good is considered to be 60 or less) but as long as I don't have shortness of breath or dizziness, it is probably ok.  She also said that she has a male patient that is an athlete, runs marathons, and regularly has a rate of 42.  I'm going to look back at my records for 2011 when I was checked out in Lee's Summit Hospital and will decide whether to see a cardiologist or just watch for symptoms.  Kind of scary, but I'm not real concerned.
I went by Jim and Jan's tonight for a cocktail.  They just got back from their summer of workcamping on the Wyoming/Utah border.  It was good to see them again.
Friday, September 27.  Shopping, shopping, shopping was how I spent my morning and not for fun stuff either, but for faucets.  At both Home Depot and Lowes, I would find a kitchen faucet that I liked, but then not find something that matched for the shower and bathroom sink or the other way around.  When I got back home, I did the same thing online and found it to be quite depressing.
I made some Maple Dill Carrots for TGIF tonight and it was nice to see all of my friends in the community again.  As usual, we have a great time and plenty of good eats.
Sunday, September 29.  Friday's faucet shopping wasn't enough, so I did it again on Saturday and finally made my decisions.  Just when I would pick out shower fixtures, they didn't have sink fixtures that matched, or only one set was available.
I spent a good part of the afternoon finishing Charlotte's sweater.  I had to alter the pattern a bit to get the front panel to look right, but I finally got it after about 5 tries.  It looks good, a piece that I am proud of. 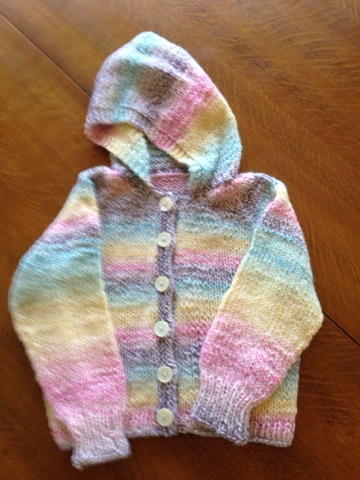 This morning, Connie and I headed to the Salt River in hopes of catching a glimpse of the wild horses. We stopped at several river access access points, but no horses were near by.  We did hike the trail along the river until we came to an area where a rockslide had covered the trail, so we turned back and walked back in other direction we came from.  It was a beautiful morning, the views of the east side of Red Mountain and the west side of Four Peaks were gorgeous.  Frisco had a great time, sniffing, squirting, and cooling off in the river. 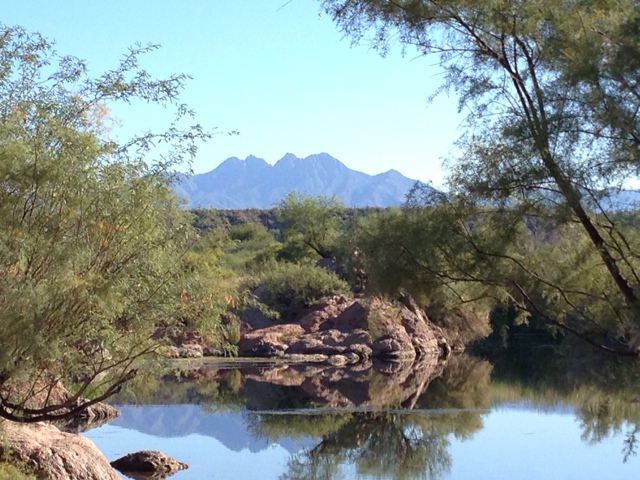 It was a good day, I heard from Pat who sent me a video if the fall colors in northern Wisconsin, got a photo of Charlotte at the playground, had a nice nap, and had a Skype conversation with Ben and family.
Posted by Bridge Coast to Coast Saga at 7:32 AM