"Monday, September 9.  Charlotte and I went to Golden Gate Park this morning and saw the ducks on Sprechers Lake, the Bison, the horses, although they were napping, the windmill and ocean, and then the new Land's End overlook where we had a snack overlooking Seal Rock and the old Sutro baths.  Just as we were finishing, Jill called to say that her friend Tina and her 2 kids (Leo and Charlotte have known each other since infancy and Enzo is about 6 months old).  They had a lot of fun together and the house looked like a cyclone hit when they left, as Leo is everywhere and into everything - all boy!

My friend, Pat, had knee replacement surgery this morning and I was so glad to  hear that she is doing well.  Love ya and hope you have a speedy recovery, girlfriend!

Tuesday, September 10.  It's hard to believe that it has been 6 months since my brother-in-law, Dan, passed away.  I called to hear his voice recording on their home phone and to leave a message for Sharon this morning and I was surprised when she answered the phone.  We had a nice chat.
Charlotte and I went to Baker Beach this morning.  She just loves the beach and was giggling a lot when I covered her toes and she covered mine.  We piled up rocks (no shells on this beach) and attempted to make a sand castle and she dug, sifted,  and plowed through the sand.  It's a great place to spend the morning with a great view of the Golden Gate Bridge, the Point Bonita Lighthouse, and Lands End.  I think our little girl with grow up to be a biologist, veterinarian, or have some career in nature.  She loves the outdoors and explores everything. 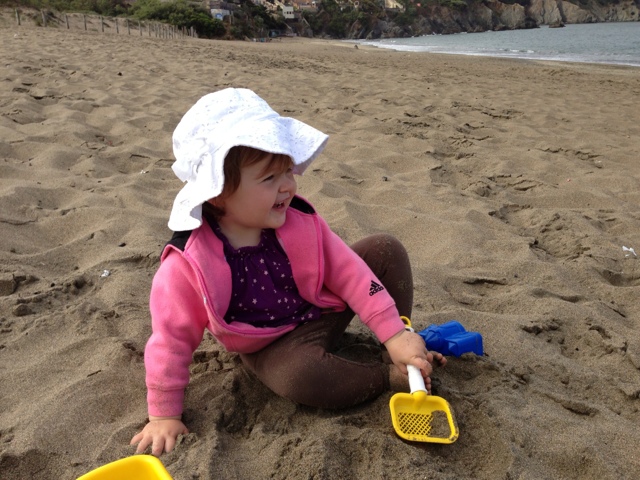 Friday, September 13.  It has been a loooong 7 months without Mike and I still miss him like it was yesterday.  Right now, I am having a glass of "Dearly Beloved" wine and I think that is appropriate for this moment.  I think he would appreciate my choice - only wish we could be sharing it.  I actually chose this wine because it goes well with poultry and we forgot to open it when we had our roast chicken the other night.
On Wednesday when Charlotte was at daycare, I went to the North Bay and went for another nice hike with Marta and her dog, Spirit in Novato.  We hiked through a marshy area and as usual, had lots to talk about.  On our way back, we met up with a young gal who had injured her knee and ankle while running.  We invited her to walk back with us in case she needed help along the way, so she joined us and was able to make it back.  We had a very nice conversation together, mostly about pets.  A stop at Panera Bread for lunch topped off our good time.
Jill and I have been able to get a lot done in preparation for the babies from laundering blankets and burp cloths to clearing out space in the cupboards for bottles and sterilizer.  Her non stress test today showed that babies are doing well and today is the beginning of week 34.  If they are born now, they would not be considered to be premature - a great milestone.
Sunday, September 15.  I can't believe that my time here is winding down and we will be making the granny nanny shift on Tuesday morning.
It has been an emotional morning for me, starting when I awoke with tears in my eyes, not from any specific thought that I am aware of.  This has happened before and it is followed by a day of very touchy emotions that are right on the surface - a thought, word, or even a glimpse of something makes the tears fall.  Maybe knowing that I will be moving on again and the thought of getting back home to an empty house has gotten to me.  Apparently it is part of the grieving process and it isn't a very pleasant one.
I kind of got my stuff organized yesterday when Ben, Jill and Charlotte went to another birthday party.  I also took some time to groom Frisco.  To top if off, I spent some time reading, trying to finish a book that I got from the local library.
We started a pot of chicken broth in the morning and we made a pot of chicken noodle soup.  I have had a craving for tuna salad for weeks and finally was able to find some good tuna at Costco that didn't cost $24/pound.  I haven't had tuna from a can since I tried making it fresh several years ago.  Ben and Jill agreed that it really does make a difference too.
Ben went out for bagels this morning and after that we took Charlotte to the playground.  It is a beautiful morning, no jacket required.  It will be a while before I will hear the laughter of chatter of children again, so I really paid attention and enjoyed it. 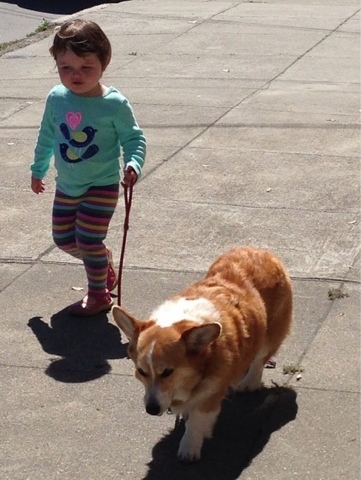 Jill was feeling good enough today that we walked to Oyaji for a sushi dinner tonight and a stop at the neighborhood playground for some bubble blowing fun.  Charlotte teamed up with a little girl named Gigi and they played together.  She was well behaved at dinner and ate a lot - full of surprises. 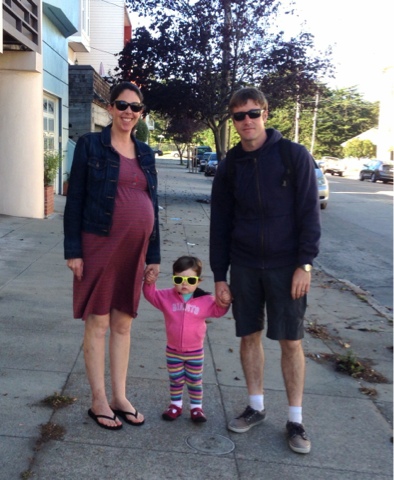 Posted by Bridge Coast to Coast Saga at 5:29 PM