It happened quickly.   Labor started around 4:00 am and they called the hospital and were told the hospital was full, they would have to go to another.  How stressful is that when you are having twins and this has been a high risk pregnancy?  They were on their way to another hospital when they heard that they could get into their hospital, so they headed straight to an operating room on arrival.  Less than an hour later, the twins were born.  Mom and babies are doing well.  I am an emotional wreck. 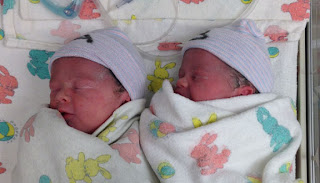 I had my cardiology appointment today to follow-up on the low heart rate.  The doctor is not concerned that I have a low heart rate and because I don't have any of the telltale symptoms of heart disease, he feels that I am in general good health.  BUT... my heart has a Left Bundle Branch Block (has to do with the electrical impulses of the heart) that was first detected in 2006 that has not been a concern in the past.  Since my heart rate has decreased over the past 3 years (59, 54, then 45 at my last checkup), I will have a Nuclear Stress Test on 10/21, wear a monitor for 24 hours starting on 10/22, have an echo-cardiogram (last done in 2011) on 10/23, and a follow-up on 10/28.  He also agreed that I do NOT need to be taking cholesterol medication, although my bad cholesterol is slightly high - I need to do a better job of eating the right stuff and get plenty of exercise.

Wednesday, October 9.  I got the carport hosed down and the windows all washed yesterday.  Everything smells so much better after the last year of dust accumulation is washed away.  Then today...high winds and an "almost" dust storm.  It was pretty miserable when I took Frisco for his late afternoon walk and my patio is full of leaves and palm fronds.

Ben called this morning, the first we have talked since Monday.  I learned that everyone is doing fine and the babies are getting a little better about nursing - it is going to take some coaxing as they are tired and sleepy.  They were happy to be going home this afternoon.  Here is proud Daddy getting his workout.

Best of all, I learned that they are both carrying the middle names of their grandmothers - Camille Rose and Norah Lou.  I know it was a difficult decision on their parts - at least it seemed that they were struggling with their selection of middle names.  I am honored, to say the least.

It took me a long time to realize that my name was chosen because of someone that meant so much to my mother - her niece, Francis Rose.  They were only 3 years apart and they grew up together and became best of friends.  Before that, I kind of resented the fact that people teased me by calling me Rosie Posie, Rosie the Riveter, a rose is a rose is a..., things like that.  The unfortunate thing is that I never learned from my mother her reasons for choosing the name that she did.  And I agree - Fran is a wonderful person who has always set a good example for me and I grew up respecting her.  She also is my godmother.

I spent the day making Zuppa Toscano for several of my friends who joined me for dinner tonight.  Along with that came the necessary cleaning and preparation for visitors.  It feels good to be cooking for more than just myself.  Connie brought Caprese salad, Jan brought garlic bread, Carmen brought pumpkin cookies and ice cream, and Kathy brought wine.  It was a very nice time and it feels good to share a meal with friends..

Thursday, October 10.  It was 63 degrees when I woke up this morning and it is strange to wake up to cloudy skies around here.  The cloudy and windy day we had yesterday has carried over but the winds have decreased.  That wreaks havoc on my sinuses that have never really cleared up after the infection I had last month in SF.  Rinse, rinse, rinse.

Saturday, October 12.  I awoke this morning to NO INTERNET - and had to do house cleaning instead of surfing.  I can only relate this to the change that I made to my Cox services that are effective today.  A technician showed up at my house this morning to deliver a cable box and install it.  On Thursday, I called to decrease the internet service that I had since it was way more than what I could ever use and I learned that they were offering a bundle that included Cable TV for the same price for a year.  Now, I just have to remember to call them a year from now to negotiate for another package.

Yesterday, I went to a few garage sales in  the morning with Connie and then spent a few hours cleaning the front and patio sides of my house.  Yea - the windows are all clean too!  This really does reduce the dusty feel and smell to everything.  This morning, I got the insides of the windows cleaned.

I went to Dirtwater Springs for dinner with Chris and Norm last night.  Norm and I ordered Old Fashioneds and had a toast to Mike.  Unfortunately, they were not like the old fashioneds I know - I wouldn't order one again.  Guess I have to wait for Hoovey to mix me up a good one when he gets here.

Sunday, October 13.  It has been a long, sad 8 months since Mike passed away.  There isn't a day that I don't look at his photo and wish that he were still here.  Love you Mike!

Posted by Bridge Coast to Coast Saga at 6:27 AM