Monday, August 25.  Big storms are rolling through here right now and there are flash flood warnings for areas all around us.  Some have been severe, with thunder and lightening, large puddles forming, and our power was out for about 45 minutes. Frisco is NOT happy.   There is rain in the forecast every day this week - I don't like being cooped up indoors.

Pat came home from work early today, in severe pain, because he tweaked his back this morning.  It's not good for a mother to see her son feeling so bad.  I hope it is short lived.

Tuesday, August 26.  The weather has improved - especially after 11:00.  The morning started out gray and dreary once more and I even got rained on while on my morning walk - not a soaker, thankfully.  I gave the trailer a good vacuuming, so I feel like I accomplished something today.

The afternoon was beautiful! I walked over to Dawn's to wish her a Happy Birthday and we sat out on the patio chatting for a while.

Pat was able to get in to see his chiropractor this morning.  He is on a frequent icing and hopefully it heals quickly.

Tom and Karen treated me to a very fine dinner tonight at the Tornado Steakhouse in downtown Madison - one of their favorite places.  I had a Cosmolitan at the bar before dinner and a Mixed
Green salad, the Peppercorn tenderloin and Pitty Pan Squash for dinner.  The atmosphere, service, and company made for a very enjoyable evening.

Thursday, August 28.  Yesterday, I spent the morning pruning Dawn's Dogwood shrubs in the front of her house.  They are way overgrown, bending forward, and blocking the air circulation to the porch.  She has been unable to tend to them because of her health, and they really need some work, so I volunteered to help her out.  After cleaning out the fern in front of the shrubs (they are past their prime at this time of year), I tackled the Dogwood and about 10 wheelbarrow loads (hauled and dumped by Rich, thankfully) later, I had the east side of the porch done.  The west side will wait until another day - and I will be taking regular doses of Advil for a couple of days. 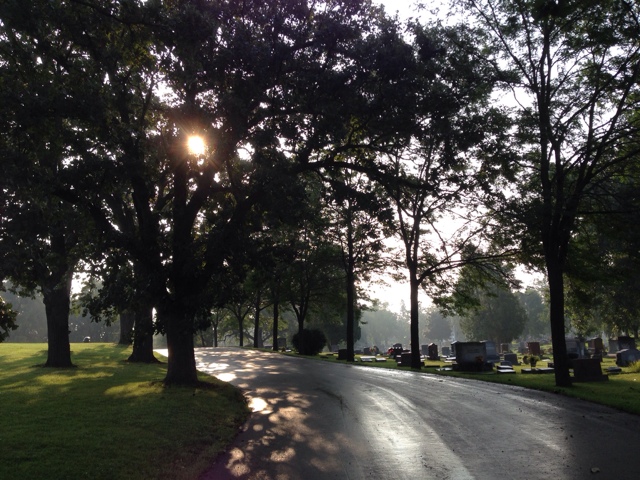 This is on one of the routes I take on my morning walks - the sun was just coming out after some good rains during the night.  I think it is very pretty.

Today, I ran errands - with the exception of a stop at AAA for a campground directory, this means that I went shopping.  I did find the power unit that I need for the GPS at Best Buy and I made stops at about 8 other stores in search of a rug for the trailer entrance.  I finally found what I wanted at my last stop, Camping World.

Frisco got a much needed bath when I got back home.

Saturday, August 30.  Yesterday, Pat was finally feeling a little better and wanted to get out of the house, so we went to Costco and then to one of his favorite restaurants, Ella's Deli in Madison for lunch.  It is a Madison landmark with animated characters that move overhead on wires, make music, or entertain in some mechanical way.  It is probably the best Jewish deli in Madison but it is also a great ice cream/dessert shop. 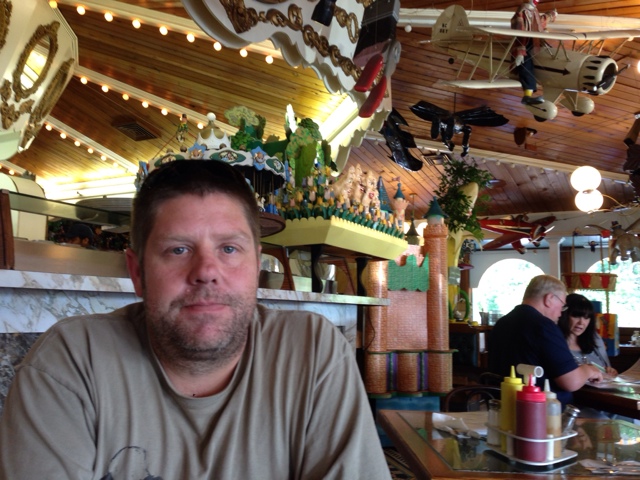 I met Pat and Roger later in the afternoon and we went to The Owl's Nest in Poynette for fish fry where we were joined by Gary and Susie.  We had an enjoyable visit over Old Fashioneds at the bar and then a delicious family style fish fry.

This afternoon, Tracey and I went to her sister's annual Stadler Cook Off - a party where guests bring dishes in the Appetizer, Main Dish, Side Dish, and Dessert categories that are judged by 2 judges in each category and then by popular vote.  The 1st Place winner's dish was Smoked Pheasant (it got my vote), Appetizer was a Reuben Dip, Side Dish was called Lazy Sushi, and dessert was a triple layered chocolate cake.  My entry was an appetizer called Drunken Grapes (red and green grapes soaked in Amaretto) - not a winner, although I will definitely make them again.  It was a good time and I got to see several members of Tracey's family - all in one place.

Posted by Bridge Coast to Coast Saga at 6:24 AM