Friday, March 21.  Yes, I'm finally getting around to writing.  And now to try to remember the events early in the week that are worth writing about.  Work is slowing down.  We had more leaving than arriving this week and my work days ended at 2:00 because I had worked on Saturday.
It had been a couple of weeks since I had talked with Ben, so we had a nice conversation on Wednesday night.  The winter weather is breaking up there and they are seeing some warmer days, enough to be able to get outdoors with the kiddos.  Jill was gone to SF, so he had the help of his in-laws over the weekend.  It has been a couple of weeks since I've seen the little ones, so I'm missing them.
Yesterday, I drove to Casa Grande to meet up with Jim, Mike's childhood friend, who had been visiting with his sister Joan and her husband, Pete in Benson.  We met at IHOP for lunch and then Jim came back to Mesa with me.  Although we have only seen him about once a year since Mike and I met, the friendship continued through the years, although I am a little uneasy about having another man in my house, I'm sure it will be fine.  He is a world traveller, is interested in archeology and geology and loves to explore, so we are heading to Northern Arizona to do some sightseeing over the weekend.  Pat and Roger are keeping Frisco for me.
This morning, we left my house about 8:00 and headed to the Tonto Natural Bridge State Park, just north of Payson. Mike and I had been here before, but we had Frisco with us and they don't allow dogs on the trails, so we were only able to see the bridge from the upper trails.  Today, Jim and I walked behind a large group of middle school kids and saw that they were actually going along the river, rock crawling under the bridge and beyond.  So off we went too, and hiked the rough terrain, crossing the river several times, hopping from rock to rock, and we took a different path than the school group took.  It was the most rocky hike I have ever taken, but I did well, slipping and falling a few times but not getting hurt and only a little bit wet. 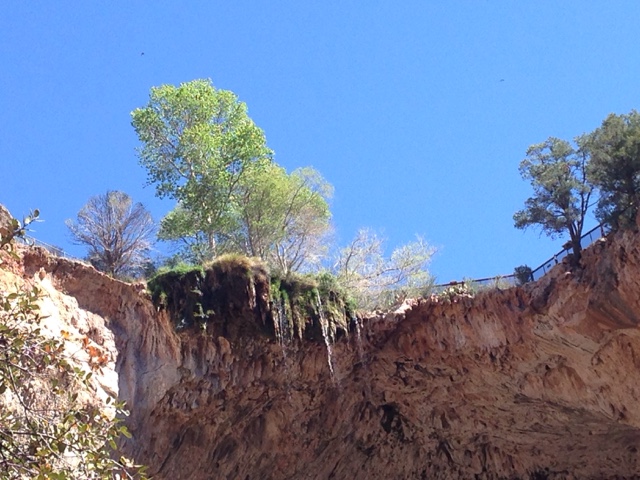 Waterfalls from the entrance. 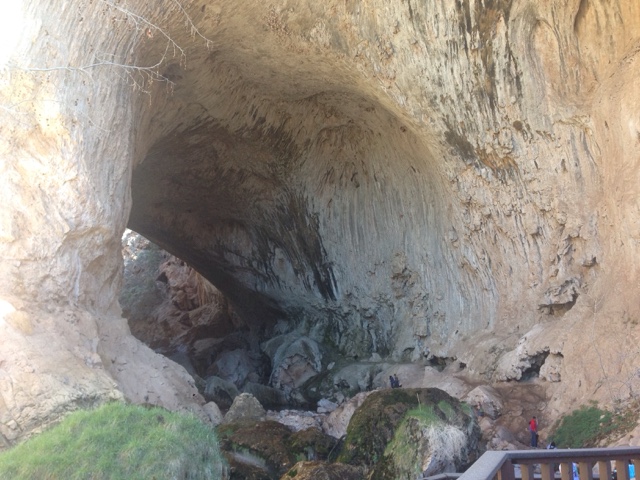 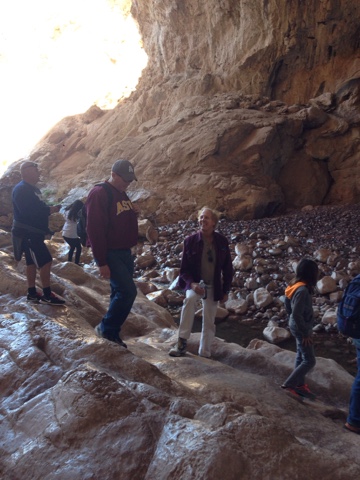 Jim chatting with one of the chaperones. 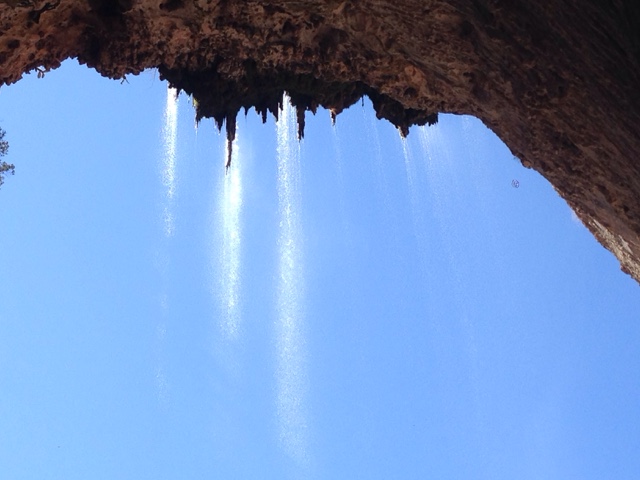 The falls from inside the bridge. 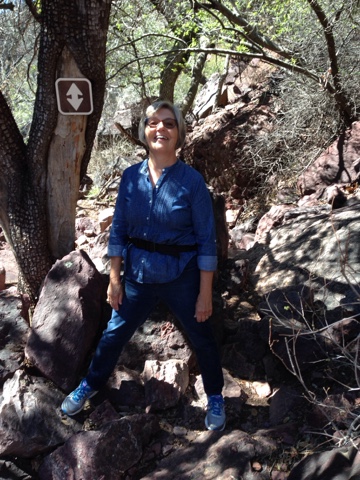 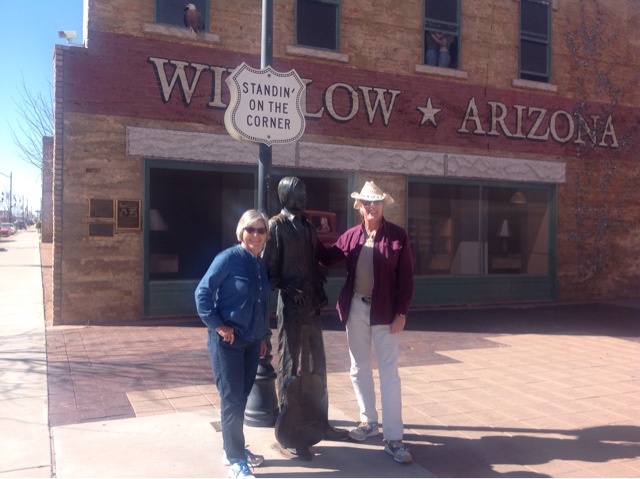 The Meteor Crater was the next stop.  Although I had been there before, I had different views today, since the guided tours were already closed for the day and I hadn't seen it from the upper and lower viewpoints.  An amazing place!
And then it was on to Flagstaff, checked into our rooms and then went to Outback for dinner.
Saturday, March 21.  Our first destination today was Walnut Canyon, a short distance east of Flagstaff.  A 0.9 mile long loop trail descends 185 ft into the canyon and passes 25 cliff dwelling rooms constructed by the Sinagua, a pre-Columbian cultural group that lived in Walnut Canyon from about 1100 to 1250 CE.  The views were amazing. 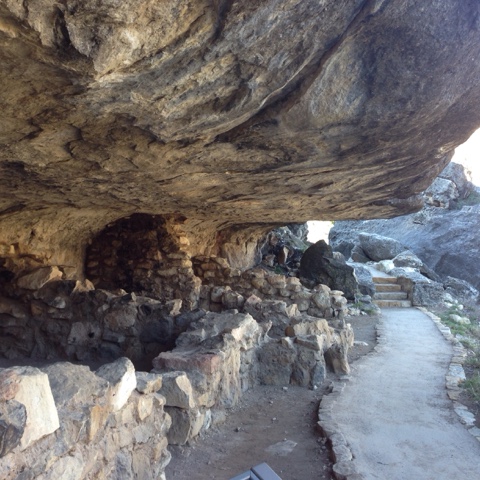 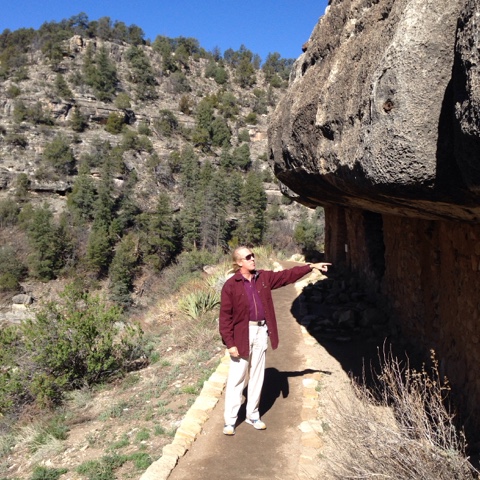 From there, we headed to Sunset Crater which is northeast of Flagstaff.  It is the first stop on the drive through the Waputki National Monument.  We hiked the one mile loop around the base of the crater and saw some amazing piles of coarse, black volcanic ash.  It amazes me how a few plants can be so persistent and able to survive in a place like this. 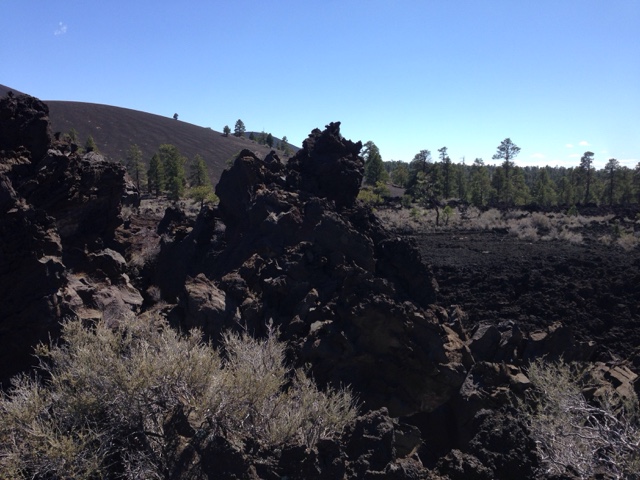 Down the road, we stopped at most of the overlooks and most of them had the painted desert in the background, just on the horizon.  It was beautiful but the photos just didn't capture it like my eyes saw it.  We also stopped to see the remains of Wukoki and The Citadel, dwellings that were built by Indian tribes from way back in 500 AD.  The dwelling's walls were constructed from thin, flat blocks of the local sandstone, and it gives them a distinct red color. Held together with mortar, many of the walls still stand. Each settlement was constructed as a single building, sometimes with scores of rooms. The largest settlement on monument territory is the Wupatki Ruin, built around a natural rock outcropping. With over 100 rooms, this ruin is believed to be the area's tallest and largest structure for its time period. The monument also contains ruins identified as a ball court, similar to those found in Mesoamerica and in the Hohokam ruins of southern Arizona; this is the northernmost example of this kind of structure. This site also contains a geological blowhole. 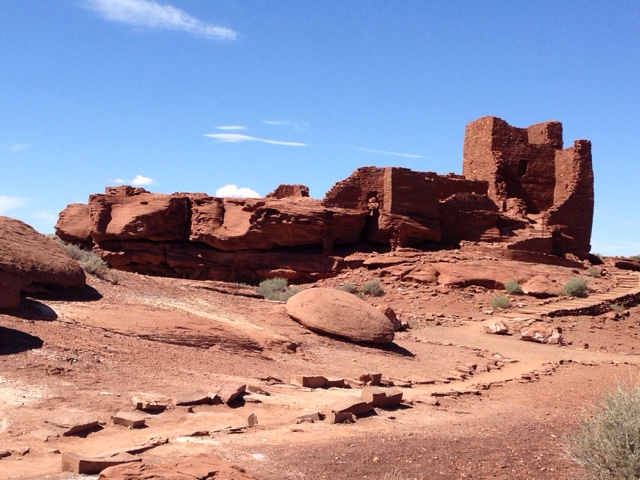 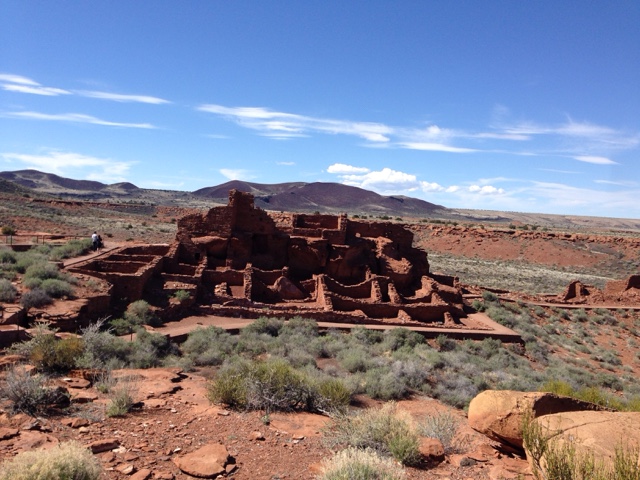 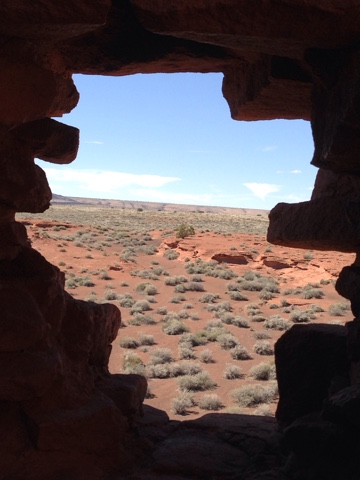 This evening, we delayed our dinner because we learned that there was a lecture about the sun, going on at the Lowell Observatory, so we took that in first.  Before hearing the lecture, we were able to look through 2 huge telescopes and see Venus and Jupiter.
Sunday, March 23.  This morning, we headed south along Hwy 89A, the scenic route to Sedona.  We stopped at Oak Creek Canyon and talked with one of the staff about hiking possibilities in the area, and decided to take the West Fork Trail, one that meanders along Oak Creek at the base of the canyon.  She told us that it was a 3.3 mile hike to the end and back and that there were several river crossings.  I'm not a big fan of rock hopping, my balance definitely needs to be improved on, but I made it, mostly in soggy, wet shoes.  The hike also involved climbing over a few log jams and big boulders but it wasn't so difficult that I felt like I wanted to turn back.  We got all of the way to the end where the canyon walls narrowed, so you were standing in a sand bar with the canyon walls only about 10 feet on both sides of the stream.  We rested, had a snack, and headed back to where we started out.  The "My Tracks" app on my phone said that it was a 4.2 mile hike back, and that means we actually hiked 8 miles.  We were both feeling it, with tired legs, hips, knees and feet, but all is good - we did it! 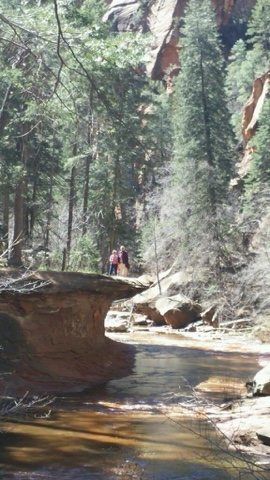 We met a couple along the trail and when they were ahead of us, they turned to look down the canyon and saw us on this outcropping.  He yelled to us to stay where we were and he took our photo and sent it to me via text message.  Thank you to the kind stranger from Canada. 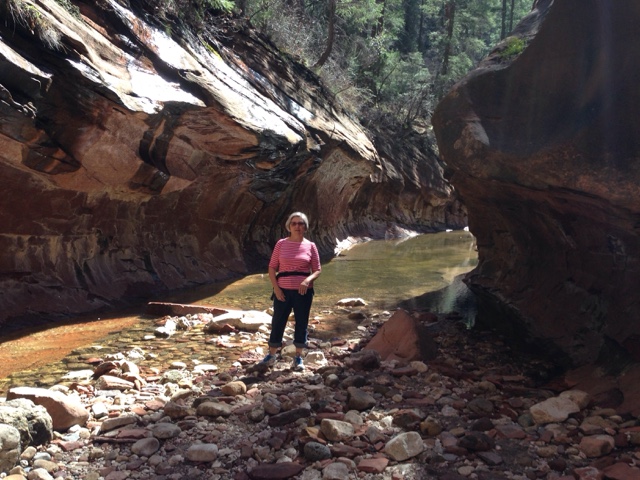 Posted by Bridge Coast to Coast Saga at 6:24 AM