Tuesday, March 2.  I'm a little stressed, to say the least.  The days at work have been so busy that I've been unable to complete all of my transactions by the end of the day and have had to stay late the last 2 and only able to squeeze in a half-hour break for lunch.  I did talk to the manager about it and he came and helped me out with a few things.  Grumbling, even if it is here on my blog, helps a bit.  Now that I've vented, tomorrow, will be a better day.  I'm going to take it all in stride, help those that I can, and get out of there on time.

I was surprised when I got home last night when Sue came walking out of Tom's house next door to say hello.  She spent the winter with him last year but has been unable to get here this year until now.  It was good to see her again and I hope to hang out a bit before she has to go back home,

The moon was gorgeous tonight when I took Frisco out around 8:30.  This photo doesn't do justice, but it was surrounded by white clouds and there was a golden ring around it.  I just love the night skies here, only wish I could stay up past 9:00 on most nights to see more of it. 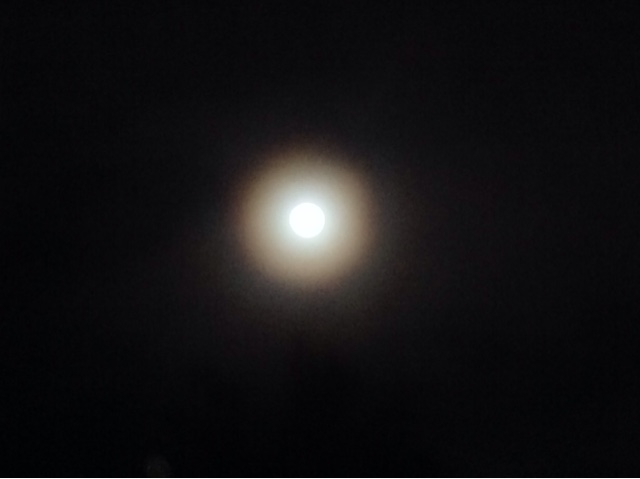 Sunday, March 8.  The focus on my days off this week have been to make curtains for the trailer.  On Thursday, Pat and I went to Ikea to look at hardware, since I have to figure that out before I can do anything else.  I decided to try the hardware that I had used on my patio for curtains.  So, I took that all down on Thursday night - it looked like it would work.  On Friday morning, I got the trailer out of storage and parked it in front of my house and proceeded to get the hardware in place first.

I fiddled and fiddled with the hardware and it seemed that the bolts were stripped - I couldn't get them to screw together.  So I went back to Ikea and bought all new hardware.  Back at home, I figured out that my problem was that the right and left sides turned in opposite directions, so I could use the "used" ones after all.  This means another trip to Ikea, but not today!  I don't want to screw holes into the walls (there might be electric running through or weak areas), so 3M Command strips is how I want to mount them.  It didn't work - they kept pulling away from the wall.  That idea is down the drain and by now it is starting to get dark and I haven't accomplished a thing.

On Saturday morning, I had to attend a Defensive Driving Class so the speeding ticket I got back in January gets erased from my record - no points, no insurance increase.  The instructor was good - he kept my attention and gave some very good examples.  Now that is behind me and I can get on with my project.

On the way home, I stopped at Walmart - maybe they will have some cafe curtain rods that will work.  NOT!  OK, so I looked online at Camping World, found something that would work, called them to see if they had the item in stock, learned that they did, so I headed over there to pick it up.  They only had 1 of the 6 that they said was available.  Grrrrrr!  I hooked up the trailer when I got back home and parked it back in the storage lot and will attempt this project again some day.

This morning, Pat & Rog, Connie and I and the dogs all went to the Gilbert Riparian Preserve for a nice walk.  It was a beautiful morning.  An Osprey and some small rodent were the only critters that we say, other than lots of ducks, geese, and Egrets.  It was an enjoyable time.

I stayed home the rest of the day and got my house cleaned up a bit, did some laundry, relaxed and read and got to see the grandkids on Facetime.  They were fussy and crying, so that didn't last too long.
Posted by Bridge Coast to Coast Saga at 6:04 AM