Wednesday, September 2.  Happy 4th Birthday to my sweet little Charlotte.  For a special treat after school today, she and I headed to Como Park to go on rides at Como Town.  Jill took the twins with her this morning to her parents house to help her mom with some painting projects.  It is always nice to have some one on one time with any of them and Norah and Camille are too small for that kind of outing yet.  We had a great time and she rode on several but where she actually drove a little electric car, she didn't have a clue.  And they didn't do a very good job of telling her what to do, just put her in and let her go - but she didn't go - and when they got her going again, she ran into things.  I was cracking up laughing and she didn't have a clue.  I guess she's not driving material quite yet. 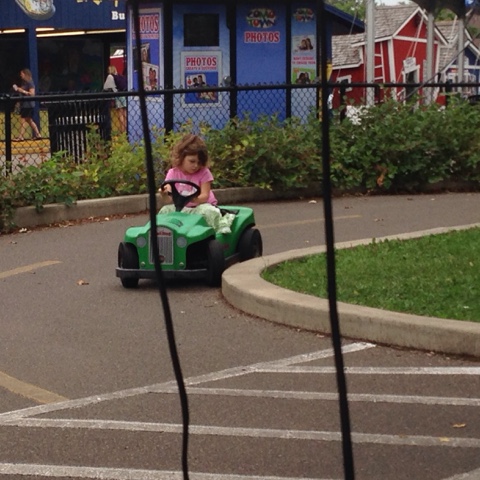 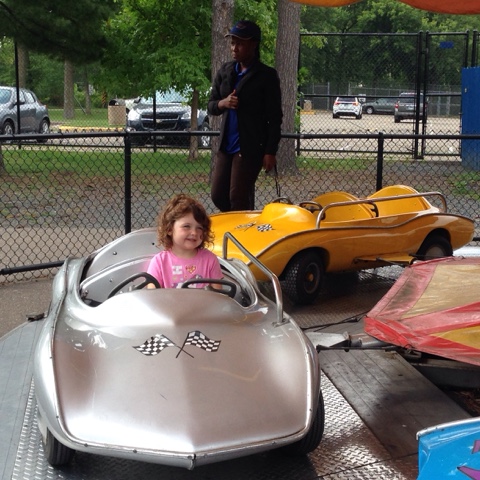 Backtracking on earlier this week, I got a small planting area prepped and out in some coneflower seeds for next summer, took the twins to the pool yesterday, and the usual busy days of helping with the kids and chores.
I made this collage of photos of Camille last Saturday when she spent a long time trying to put on some of Charlotte's dress up clothes.  They now want to do everything for themselves and they are learning fast. 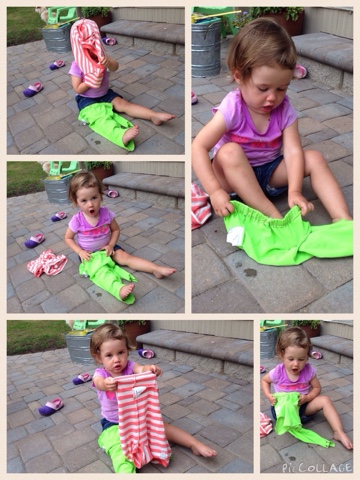 Thursday, September 3.  Little Camille has a cold and isn't feeling too great today, so she stayed home with me this morning while Jill and Norah went to an early childhood event.  We walked to the playground but she wasn't much interested in playing a lot, but she didn't want to go back home either.  She was interested in eating her snacks though.  These kids are all about eating and they let you know it too.
Tonight, Jill and I went to Costco - she wanted to see if it would be worthwhile for her to shop there.  I think it would be and she ended up buying almost $400 worth, so she must have too.  When we got back home, the project was to divvy up all of the meat for freezing and find a place to store the rest of the stuff.
I was thinking today, that I am getting short on the time that I have left to be up north, less than a month now and part of the time will be in Wisconsin.  The summer starts and I'm thinking it is a long time and I will be able to see and do everything that I had wanted to do, but then it just flies on by and there is a long list of things that I haven't done or people that I haven't spent much time with.
Friday, September 4.  Camille is still it feeling good today, so she stayed home with me this morning while Charlotte was in school and Jill and Norah went to another class.  I needed to get a few groceries for the weekend so she and I went to Trader Joe's - something she hasn't done a lot of, so it was new and she was very interested.  When we got back home, I thought a walk about would be nice, so we grabbed the trike and set off.  This held her interest for a little more than a block and then she wanted to be carried, so we took the shortcut through the alley with me carrying her all of the way.  No wonder my hips are burning when I go to bed at night.
Charlotte and I walked to Pershing Park (about 8 blocks away) this afternoon, and she played in the pool with a new friend named Lulu (also 4 years old) and we learned from her Grandpa that she also has twin sisters that are 3 years old.  Grandpa and I had plenty in common to talk about, as we both were involved in helping with the little ones.  The girls had lots of fun together on this hot, humid summer afternoon. 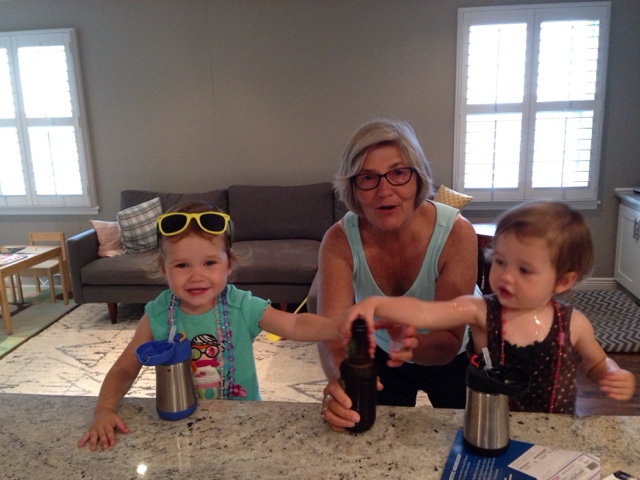 We were supposed to clink our glasses together and say "Cheers" but instead they both grabbed my bottle and wanted to feel the cold.  As you can see, they love necklaces and sunglasses these days.
Poor Jill, she had a battle with the dreaded "P" tonight at bathtime.  When Camille was done with her bath and Jill was getting Norah out of the tub.  While her back was turned, Camille pooped right in front of the door, then stepped in it and ran around the bathroom before Jill realized what was going on.  The door couldn't be opened without smearing it all around and Ben and I were both outside, so neither of us could hear her pleas for help.  When Ben came in and heard the ruckus, he gave her a hand and then it all had to be cleaned up.  What a mess!
Saturday, September 5.  I have just learned that my 56 year old brother, Ray, was found dead in Cedar Rapids today and his death is considered to be suspicious, although I haven't heard any more details.  He has been a homeless alcoholic for years but has been in contact with his foster sister, Joanie on a regular basis.  When I spoke to her this afternoon, I learned that his health has been bad and he has been in the hospital several times in the last month.  She was planning to commit him to a treatment program today, a day when the 3 signers could present, because he was in such rough shape.
He has been in contact with some of my siblings recently but it has been several years since I have spoken with him.  I am feeling very sad that he died alone and was never able to fight off the alcoholism that controlled him for years and what a terribly, lonely way to die.  Sadly, my brother Russell is living in those same streets, fighting the same battles, and they at least had each other.  Unfortunately, some day he will probably meet the same fate.  Worse for him, he has no family members nearby either.
Sunday, September 6.  I loaded up my bike and hooked up the car this morning, had breakfast with the family, and then headed out.  I was on the road by about 10:00 with a 4-hour drive ahead of me.  Add an hour for pit stops, coffee, a liquor run, gas, and it was actually 5-hours before I arrived at the land in Richland Center.  It was nothing to get set up because I wasn't planning to plug in (I have lights with the 12-volt system), so all I had to do was get the fridge running on propane and I was set.  It was good to see that group of friends again and our visit was pretty low key but as always, lots of good memories to share and to laugh about.  It was truly strange without Tom there (he died back in January) and he was the reason that we started the tradition of the 4th of July camp outs that continued for about 30 years. His wife, Leslie, and I have much in common after losing our husbands way too early.
I have received no new information on Ray's death but I did get a call from a Linn County investigator who was looking for contact information for his son, Anthony.  After that, I was in a land with no cell phone signal until I got back in the Madison area. 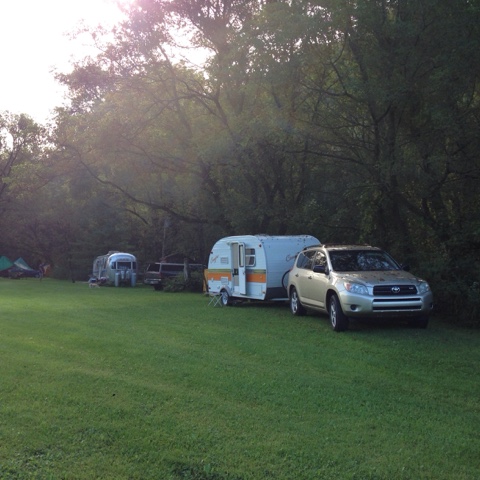 Such a beautiful spot this is.
Posted by Bridge Coast to Coast Saga at 5:02 AM