Tuesday, September 8.  I got back to Pat's house yesterday afternoon and it only took me 3 attempts to get backed into my parking spot in the driveway.  My backing skills are definitely improving.
Pat made a nice dinner of pork enchiladas and a salad, we chatted for a while and then I turned in early as I hadn't slept much the night before because the rain kept me awake from 10 pm until about 3 am.  Still no word on Ray, but I did talk to Anthony.
This morning, I went with Pat to Madison to Cabela's so he could get some fishing gear.  He didn't work today because of the rain,
This afternoon, I met some of the girls from the Class of 1966 at Culvers and we had a great visit - lots of stories, memories, and laughter.  We were there for almost 3 hours and my cheeks hurt when I left.
Friday, September 11.  You just can't get past this day without remembering the horrible terrorist acts of 2001.  That was awful, but we were also stressing because Ben was returning from a vacation in Japan that day and we sat on pins and needles until we heard that his flight had landed.  They landed in San Francisco, although they were scheduled for landing in LA, escorted by F-16s and it was the only international flight allowed to land in the states once the airports were closed down.  It was a sad and scary day for America.
This has been a rough week and yesterday was especially hard when we learned that my brother Ray was strangled and left to die next to a church.  A suspect has been arrested, but as of this morning had not been charged.  Just the thought of him dying as a victim of homelessness was hard to take but this news just knocked me down.  I hope that he is resting in peace now. 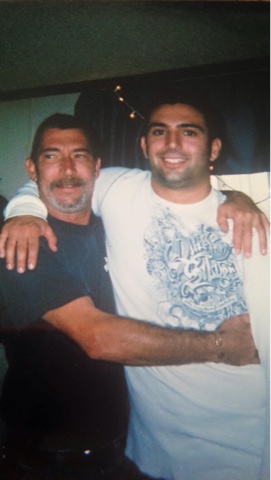 Ray and his son, Anthony, about 3 years ago.
I've not been doing a lot this week, walking with Dawn, putting around the house, cooking, talking on the phone, and just hanging out.   After the rain on Thursday, the nighttime temps have been in the upper 40s and cool clear fall-like days.  Days where the sky is a clear, sharp blue and the leaves are turning colors and falling, and the sound of the Canada Geese fills the air - you know what is around the bend but nobody wants to say it.  Tracey shared this photo of a Stoughton sunrise with me. 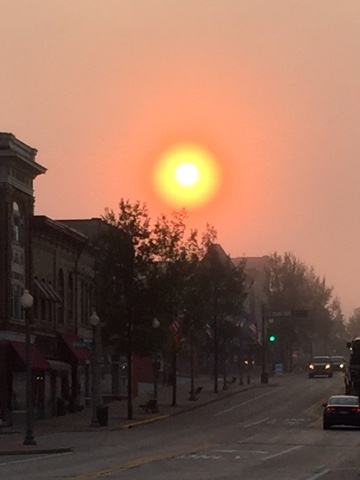 Dawn had her 2 grandkids, Lila, age 7 and Nolan, age 4, on Saturday and we all walked to the playground.  It was fun to be around kids again.
Posted by Bridge Coast to Coast Saga at 6:22 PM