Monday, January 11.  This damn crud lingers, so I saw the doctor again today.  Guess what - sinus infection and a regimen of antibiotics and steroids.  I promise to myself that I will not let these get out of hand again - it's been a rough 2 weeks.
Tuesday, January 12.  I've been hungry for soup again and while browsing through recipes today, I decided to make Zuppa Toscano, the Italian sausage and potato soup that is so yummy.  After Rose's Taxi Service dropped Arlene off at her hair appointment, I headed to the grocery store for a few things. I got the soup in the pot and invited Arlene to join me for a bowl later on.
Our community club annual meeting was held this afternoon and was well attended - too bad that we can't get more of the new people to join us - it's always the loyal folks who get involved in everything.  I walked home with Tom and invited him to join Arlene and I for soup.  We had nice conversation, then watched President Obama give his last State of the Union address of his presidency. I think there was one non-Democrat in the room based on some comments.  I love President Obama and have great respect for a man who has been treated so miserably by some in our country.  I think he has made great strides for this country and I'm even leaning farther to the left for the next election.
Wednesday, January 13.  I worked 2 of my cleaning jobs today.  One, I was hired involuntarily by the owner of the condo and there was confusion on who's responsibility it was to pay me.  Regardless, they will work it out between them and I will get my pay from either the owner or the renter in the future.  It only took me 4.5 hours to do both jobs but I was exhausted when I finished.  I still think it's a good job, I'm making good money, working for good people, and I hope that I can continue to handle the physical part of it.
Friday, January 15.  My hiking buddies, Pat and Roger, our dogs, and I headed out this morning to Gold Canyon to hike the Peralta Trail, a 7.5 mile drive in a dirt road just to get to the trail.  Now, I've been back at the trailhead a few times in the past, but never stepped a foot onto the trail before.  Our intention was to hike to the Fremont Saddle (about 2.5 miles) where we would be greeted by spectacular views of Canyon Lake and Weaver's Needle (a famous landmark in the Superstition Mountains).  The trail was rough and with 3 folks who haven't hiked in a while, we didn't quite make it all of the way to the saddle.  Regardless, we really enjoyed the hike and saw many spectacular views including waterfalls - yes, there is water in them hills after recent rains. 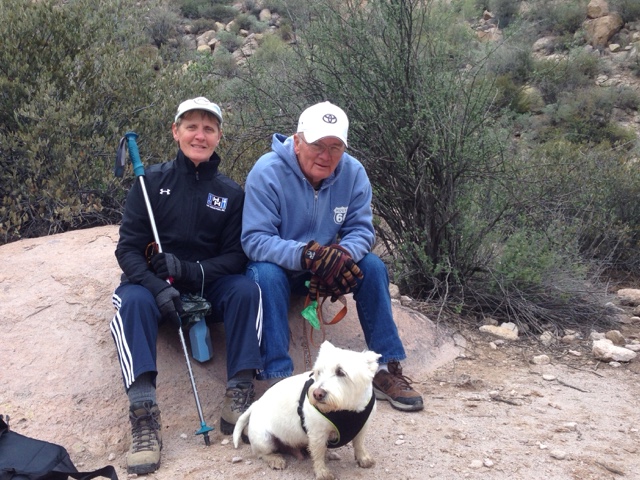 A chilly start for our hike. 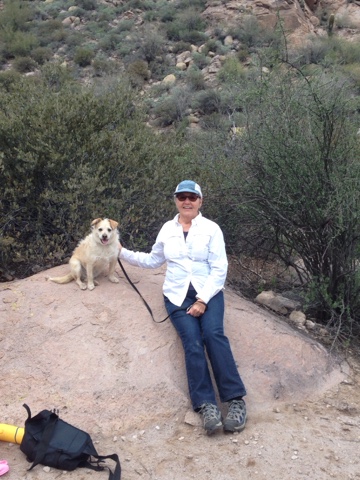 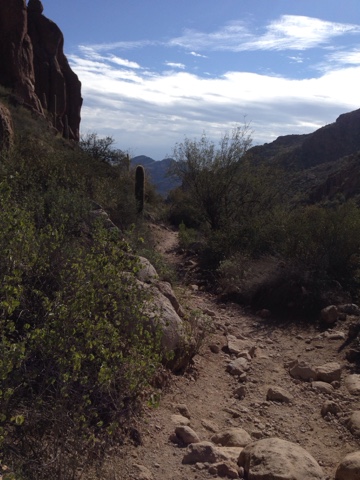 The trail, looking south through the canyon. 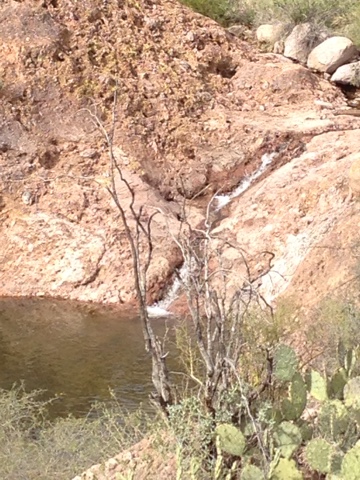 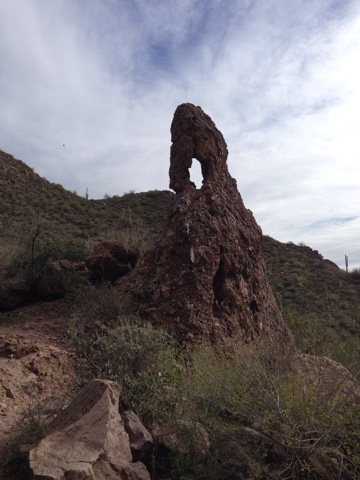 A needle - only not the one that we were looking for.
Sunday, January 17.  I had guests for dinner last night.  My friend, Lance is in town because his brother-in-law, Wes, who lives nearby had a stroke just after Christmas and is in a rehab hospital near me.  He was home alone, as they are in the process of selling the home here and moving back to Illinois and his wife, Mary, was up there.  Lance is here to help Mary out - she also had a stroke just a few days after back here to be with her husband, although hers was very mild and she recognized that something was wrong and got help right away.  Now, Mary has to go back to Illinois, so Wes' sister, Annette, arrived from Alabama to be here with him.  So...I invited them to dinner and they eye so grateful, since they had been living on sandwiches while going back and forth to the hospital.  The good news is that Wes is coming around little by little, making progress with each therapy treatment.  We had a nice visit and exchanged phone numbers so I can help out in some way, if needed.
This morning, as I was walking, I thought it might be nice to go out to the river for picnic.  I called Connie and Arlene and then Connie called Kathy and we had a plan. We picked up a Tonto Pass, stopped for Subway sandwiches, headed out to the Lower Salt River, parked in the Phon D Sutton lot and took a short hike down by the river.  Found a spot under a tree, with the sound of the water rippling along, put down a blanket and had some lunch.  A very enjoyable time. 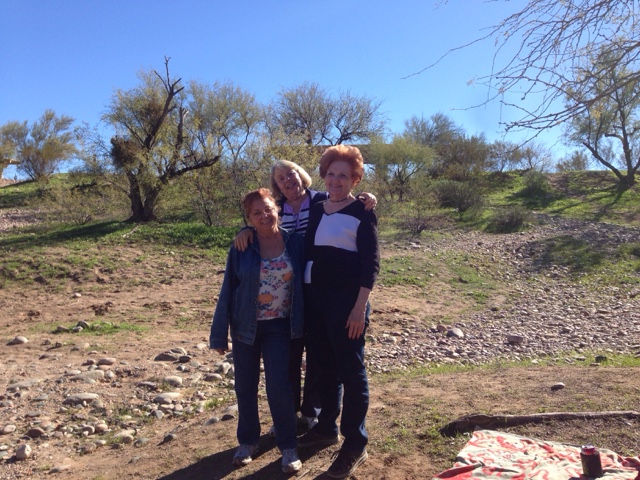 Posted by Bridge Coast to Coast Saga at 10:52 AM