Monday, June 13.  It was close to 11:00 before we were ready to go to Ron's this morning and when we got there, he had the coffee on, a stack of gifts (he works in a large warehouse and is given stuff all of the time), and his photo album out.  We took a walk down memory lane when we went through the pictures.  A nearby cafe was our next stop, then we spent some time browsing at an antique mall before heading back to Ron's house and the campground.
Janeen (Ron's girlfriend) and her daughter Karly came by with pizza for dinner and we had more laughs.  It wasn't long and it was time for her to go home and for me to walk Frisco, then I took Ron home and said goodbye. He was so happy that we came to visit and I'm glad that we did too. 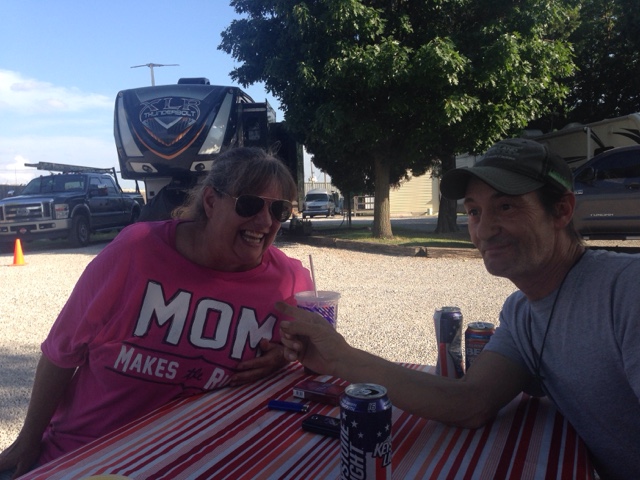 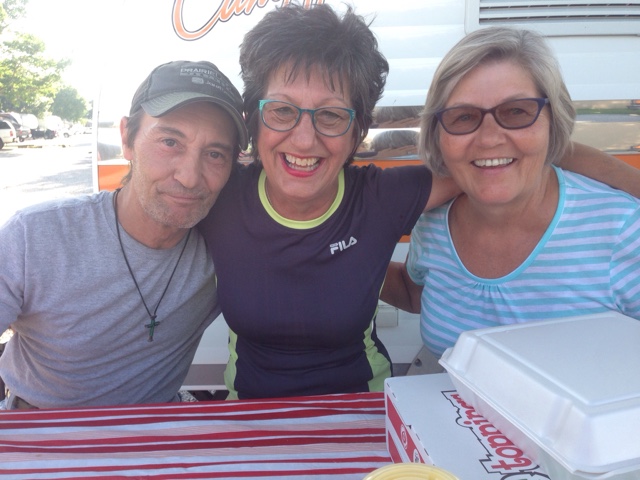 Ron, Rene, and Me
Rene and I are definitely on different schedules, she stays up late at night drinking beer and then sleeps in late in the morning.  I am an early to bed and early to rise kind of gal and am accustomed to living alone.  I couldn't get to sleep because I could hear her talking on the phone outside at the picnic table and then when she did come in for the night, she talks to herself until she finally drifts off.  I would love to do more road trips and spend more time with her, but this difference might cause some problems.  Tomorrow we head back to her house and I will spend one more night there before my next stop in Kanas City to visit Rita and Bob and their families.
Wednesday, June 15.  When I was emptying my waste tanks yesterday, getting ready to leave Wichita, I noticed water dripping under the trailer, it looks like there might be a puncture in my gray water tank.  I guess I must have hit something in the road, I can't see how bad it is - will have to have it checked out.
Rene and I made it back to her house around 3:00 in the afternoon and Mike had been shopping, he picked up steaks and sweet corn for dinner tonight.  It was another very pleasant evening.
This morning, I packed up and headed off to visit Rita and Bob's families near KC, a beautiful drive through the rolling hills with views of Truman Lake for miles and miles, a few small towns, and then I arrived at Bob's early in the afternoon and got setup. I will be spending the next 3 nights at Rita's house, dividing my time so I can have one-on-one time with each of them, the trailer is staying at Bob's, as he has the perfect spot for it.  Bob was babysitting Lincoln, his grandson, so we played with him and went and had a shaved ice for a treat. After a short visit with Penny when she got home from work, I headed over to Rita and Denny's house.
We had a very nice dinner and sat out on the deck, talking until almost 11:00, much later than any of us are usually up.
Friday, June 17.  Now to backtrack on what happened yesterday - oh, Rita and I went to Stella's house, where Barley greeted us at the gate, fully armed with a pistol on his belt, BB gun in his arm, and earbuds in his ears - he was doing special ops.  We all headed to Brookside where we had lunch at Jalapeno's, then stopped at a few cute shops to browse.  We're all getting ready for a family gathering at her house tomorrow, so we dropped her off so she could grocery shop, then Rita and I did the same.  We prepped for our salads when we got back home.
We grilled steak and salmon for dinner - yum, yum and moved out to the deck for cocktails.
Penny picked me up this morning and we headed to the Plaza to have breakfast with Bob.  And then we were off to the city market and to visit the Steamboat Arabia Museum.  The ship was delivering merchandise to Parkville, MO, items that would be loaded onto wagons that were headed west to the pioneers and towns that were being settled.  It hit a snag in the Missouri River and sunk in the mud, all passengers and crew were saved. The only casualty was a mule that was tethered to a post.  Then, as the banks and route of the river was ever changing, it got covered up in mud that kept the payload well preserved.
Back in 2010, the ship was discovered by some guys who were interested in the history of the river and sunken ships. There are estimated to be about 400 of them in the Missouri River.  The most valued item listed as cargo was several barrels of the best Tennessee whiskey - never to be found again.  The story was very interesting and we got to talk with one of the men that was part of the excavation and he had very good stories to tell. 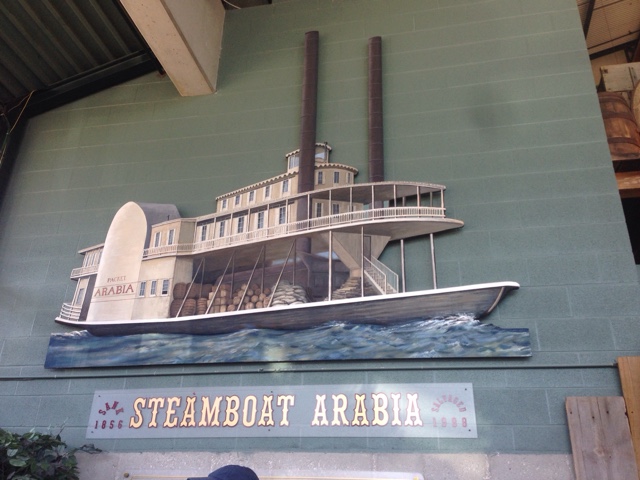 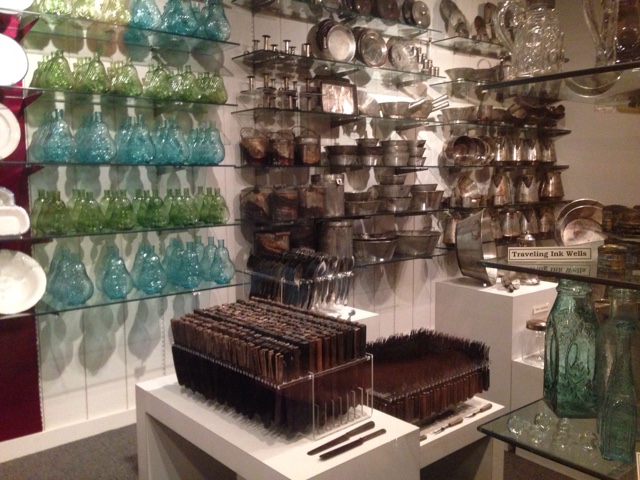 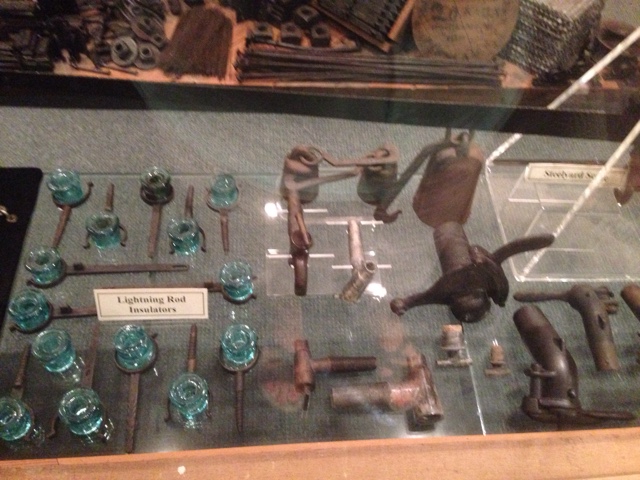 Christel had the KC area family all over to her house tonight and it was so great to see all of my nieces and their families.  Her yard and home are perfect for entertaining - a large, wooded parcel, right in KC near Swope Park and not far from the Plaza.  Christel is an art teacher in Lee's Summit and there are interesting, brightly colored works all through her house.  We mostly hung out on the decks, it was a hot night out but fans and shade kept us comfortable.  The kids had fun catching fireflies. 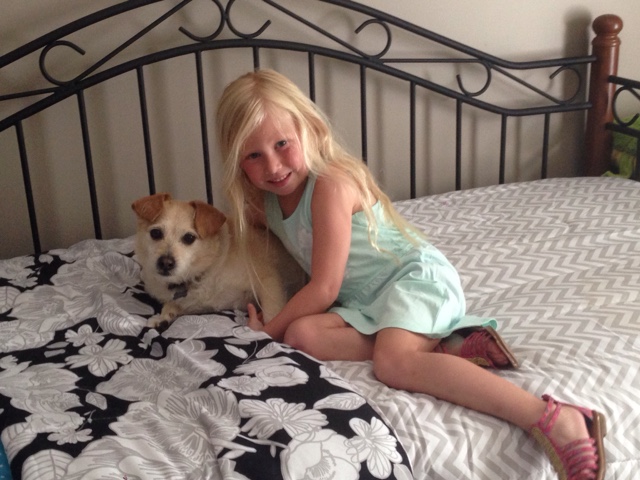 Olivia just loves Frisco and she loves posing for photos - can't you tell? 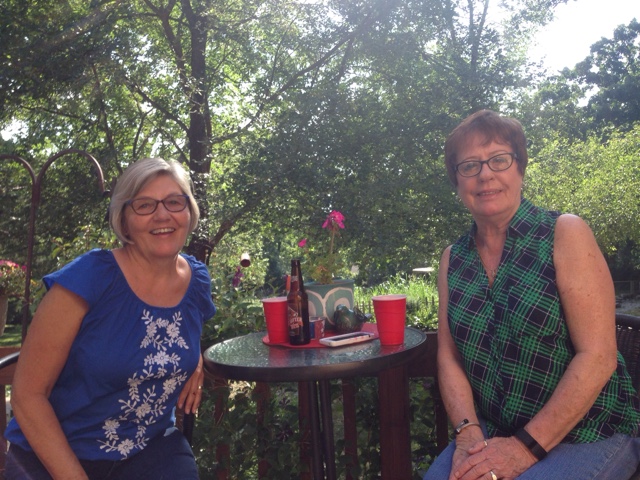 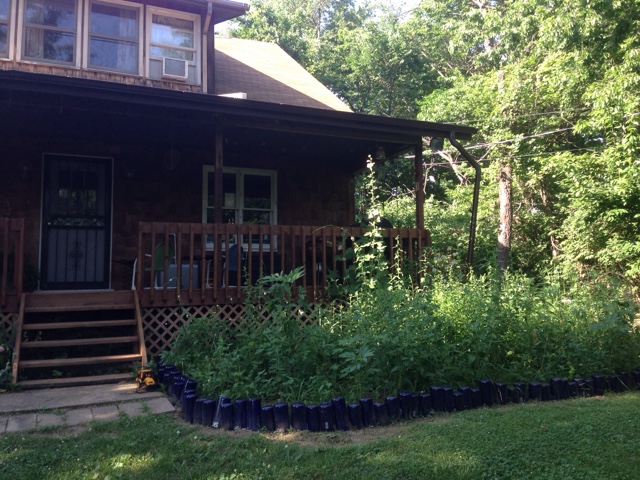 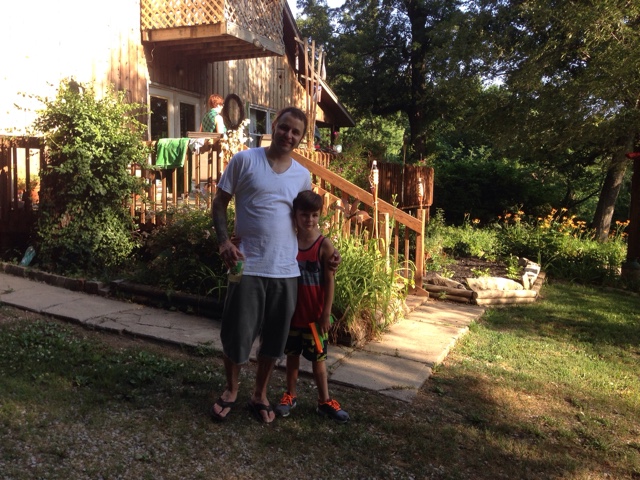 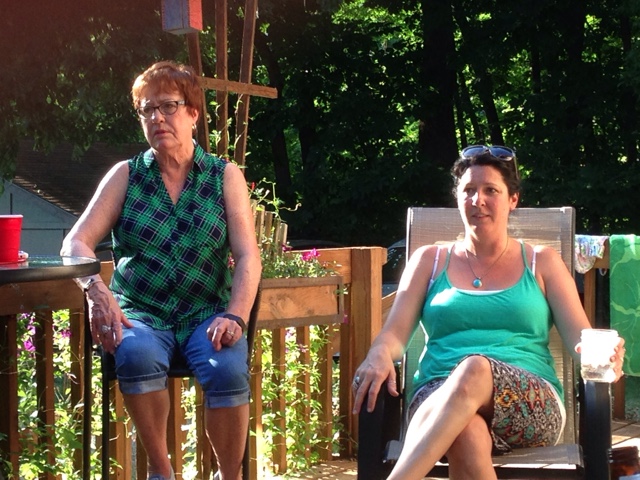 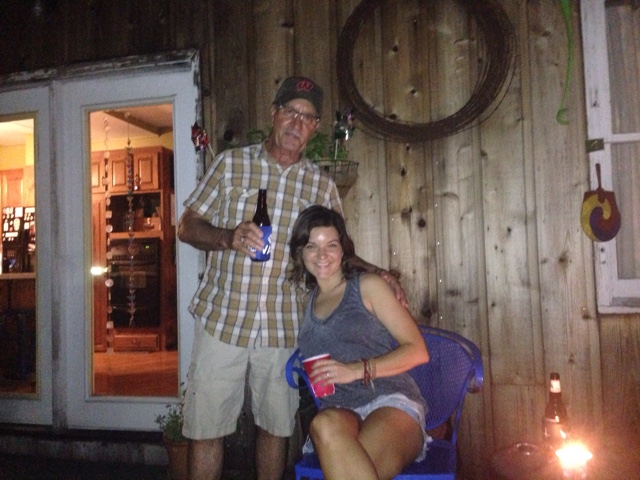 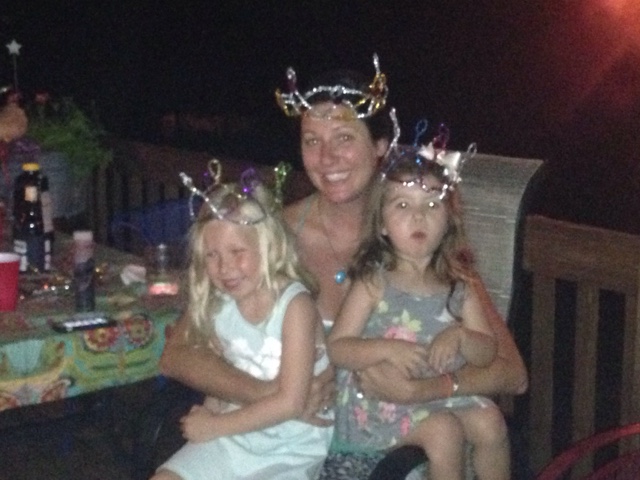 Christel made Princess Tiaras for Olivia and Harlow 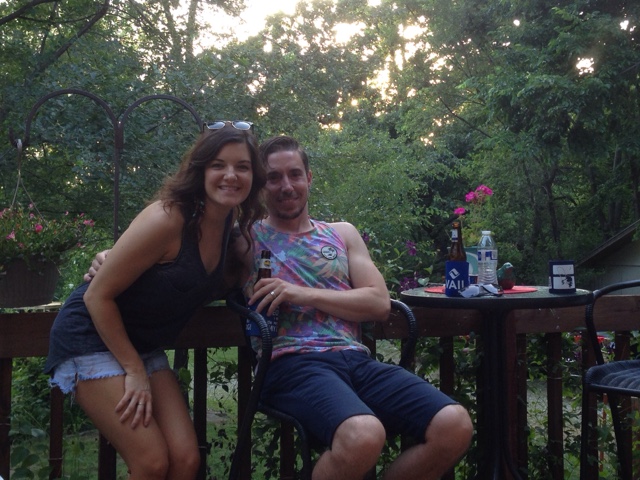 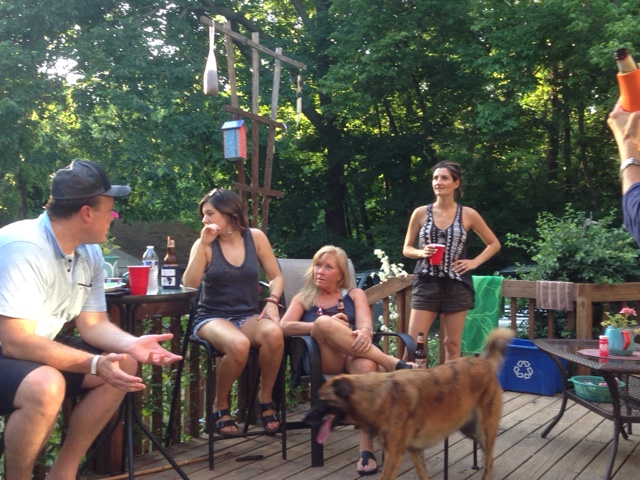 Joel, Ashley, Theresa, and Amber
Sunday, June 19.  I moved back over to Bob's this afternoon and we just hung out, had peppers and sausage for dinner, visited with Penny's Mom, Norma, and just enjoyed his beautiful home, yard, and deck and especially their company.
Today, we started the day with coffee, then a walk, and just a relaxing morning.  This afternoon, we ran some errands and then stopped at Ashley and Amber's new homes since I hadn't seen them before.  Ashley's house is in the historic district of Brookside and she and Chase are in the process of furnishing and giving it their own personal touch.  Chase's family is in the tile, flooring and decor business and his mother, Theresa, is a home decorator who lives in Fort Myers , FL. She has been visiting and giving them guidance and helping get the house together.  Amber and Joel's new home is in a newer family community in Lee's Summit, complete with fitness rooms and swimming pools - great for a young family with kids.
We picked Norma up and went to Jack Stacks for BBQ dinner - mmmm, mmmm good! It was an early night for all of us. 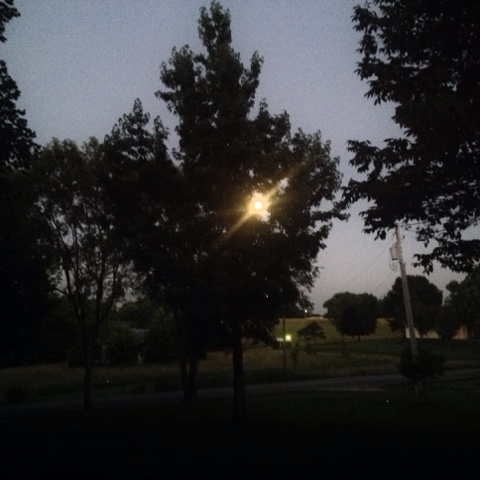 We watched the full moon rise through the trees.
Posted by Bridge Coast to Coast Saga at 5:55 AM