The Wednesday, June 1.  Happy Birthday, Savana - 23 - really?  I'm sitting here on Randy and Julie's porch, watching the rain and hearing the thunder in the distance.  My camper and car need a bath.  I haven't seen this since December.
I got to see my brother, Rick for lunch today - about an hour was enough for all of us.  Randy was on his lunch break from work and we met at this cute little Italian place called Bambino's, just down the street from Rick's apartment.  We met there because Rick is battling an infestation of bed bugs, so I couldn't go there and he still had some calls to make to exterminators.  Who knows how they got there, but this is the 2nd time he's had to deal with them, also the 2 other apartments in the building - low income, single guys, who all like to party.  He's looking good and we had a nice visit. 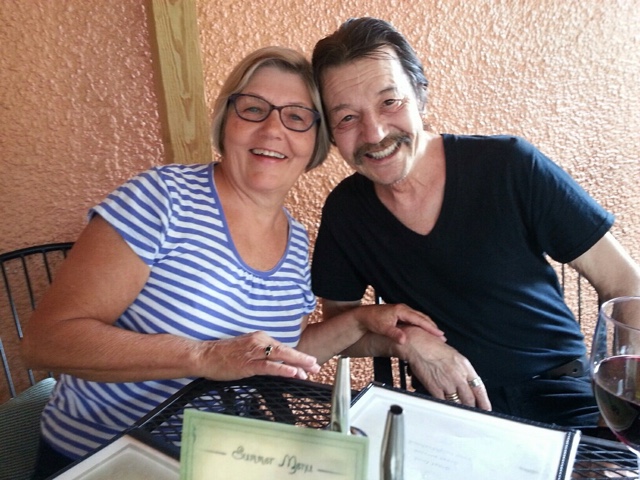 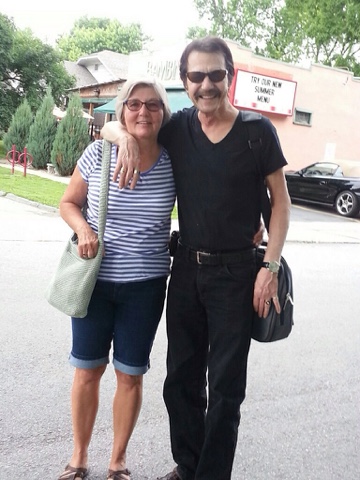 The trial for my brother, Ray's, killer started today in Cedar Rapids.  Rita and Denny are there and will keep the rest of us informed.  I just couldn't be there, for personal reasons.  I don't ever want to see that guy and I just hope that he gets the entire 30 year sentence that he faces.
Julie is babysitting for Jax again today - what a sweet little good natured guy he is. 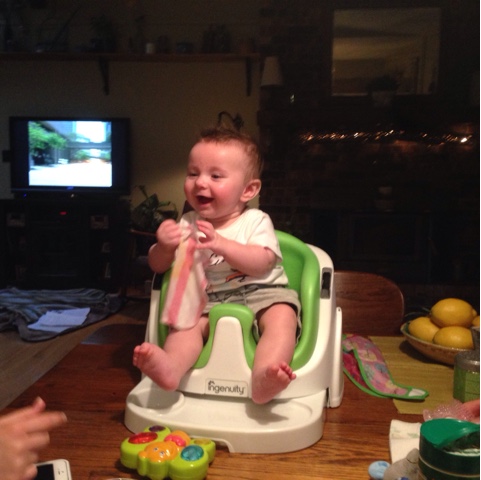 Friday, June 3.  We drove the last 2 days, heading south to Julie's Aunt Joan's beach house at Alligator Point, F!, a total of about 16 hours with a stop in Tuscaloosa, AL for the night. 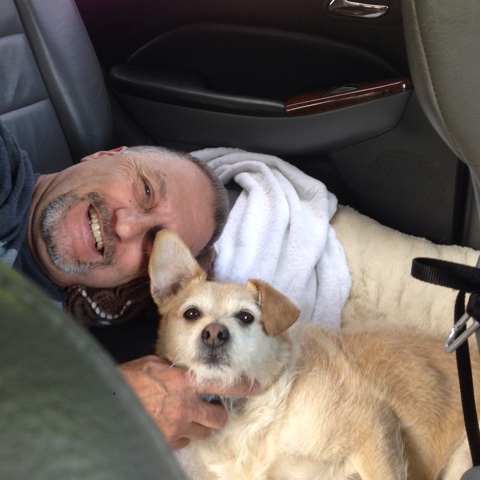 Randy and Frisco lounging in the back seat.
Today's drive was uneventful too, we made good time and several stops at roadside stands for peaches, plums, cukes, and boiled peanuts.  Some cleaning needed to be done when we got to the beach house and as soon as we finished that, we got to the beach in time to see the sunset.  A large tow truck was there, loading a small airplane that had crashed on the beach about the time we arrived and we didn't even know it. I guess the pilot had a neck injury but the folks clearing the debris didn't have many details. 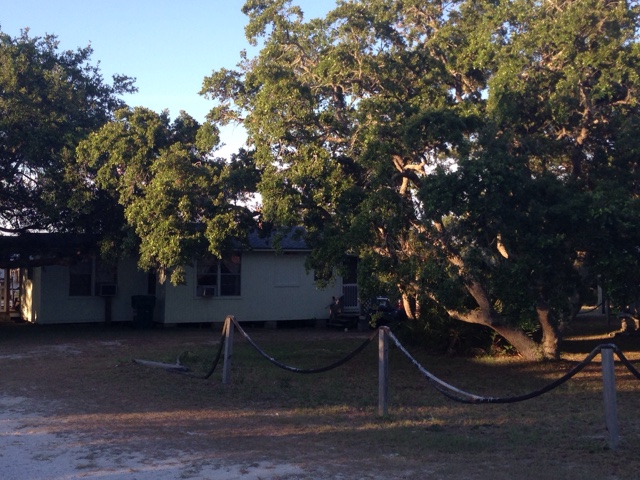 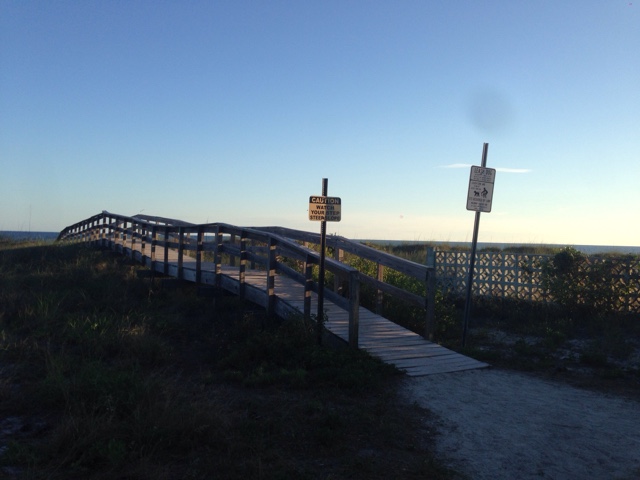 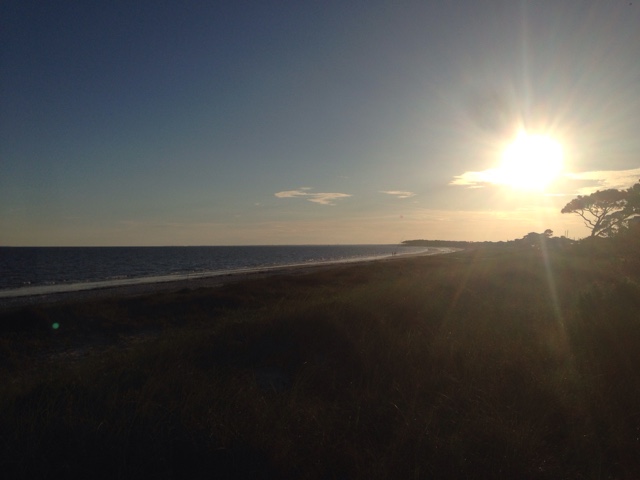 Sunday , June 5.  Naturally, our days have started out on the beach, stopping to chat with folks, going in for a dip every now and then - it didn't take long to be feeling like you needed to cool off, as the humidity feels like it's about 100%.  I think I know why I like Arizona better than Florida - I don't think that I've experienced sweat rolling down my cheeks since I lived here back in 2002-2005.  And that sweat came with very little exertion.
Yesterday, we headed into Panacea to get a few things and I lucked out when I found a pair of Crocs flip flops reduced to $20 (lime green with pink polka dot straps).  We bought a beach umbrella to keep Jax out of the sun and then headed down to buy some regular and Cajun flavored boiled peanuts from a guy that Randy and Julie met last year - what a character he was!  And what a way to make a living - seems like a hard scrabble life and by the looks of the couple, they are quite weathered.  And then it was on to Mad Anthony's where we sat on the thatch roofed, screened patio and had a couple of cocktails for happy hour - and lots of laughs to accompany them.
Ali (Randy's daughter), her husband, James, and baby Jax arrived late in the afternoon and will be staying with us for a few days.  We had a bite to eat, then headed to the beach, so Jax could have his very first experience with that part of nature. 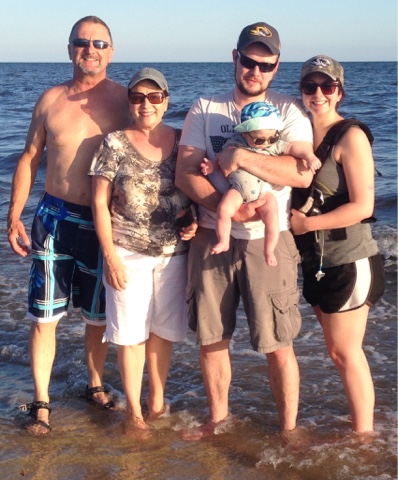 Sunday, June 5.  Today is the day that I had originally planned to arrive in Springfield and here I am, way beyond that and at the beach for the last 2 days.  Julie and I walked a long way this morning but the shelling wasn't real good.  I'm trying to get a nice variety of shells for the grandkid's.  Speaking of grandkids, I got this great piece of Charlotte's Art Work today.  She told me that it rained right after she did it and it disappeared. 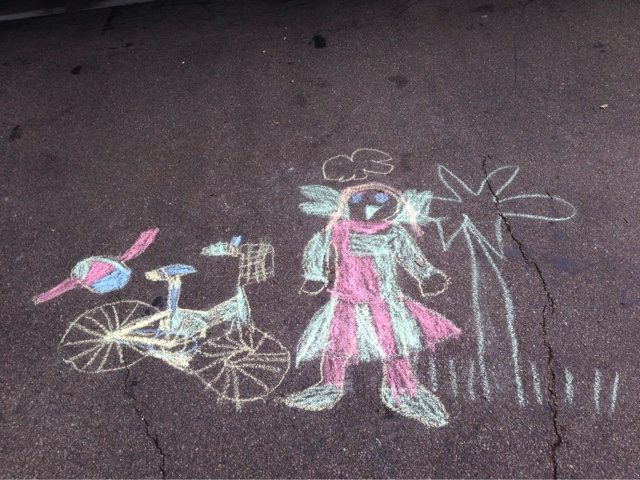 Birdie Girl With Bicycle and Helmet 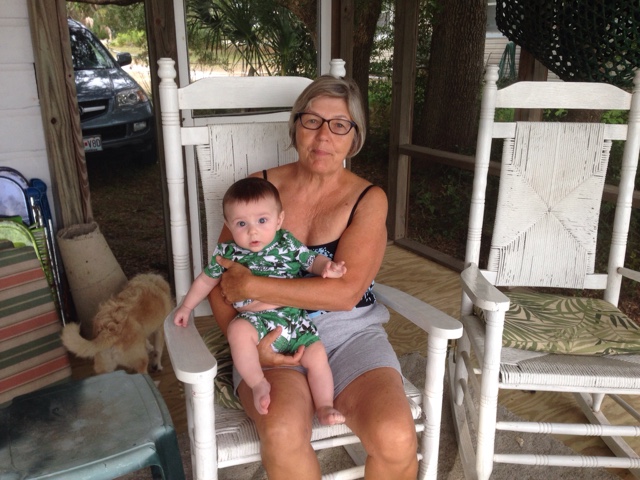 Jax and I enjoyed the porch for a while this morning. 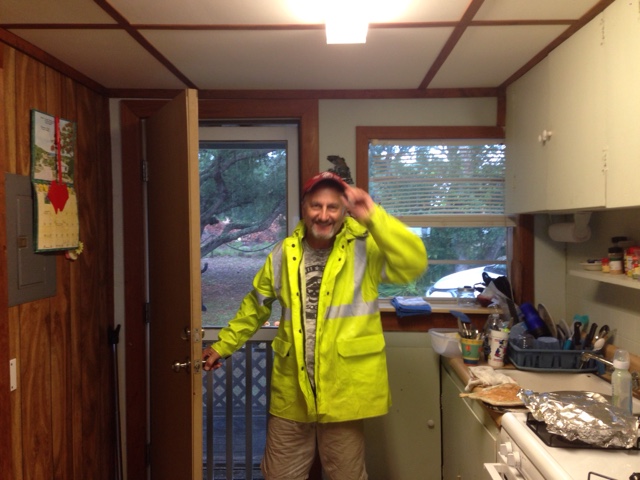 Randy's grilling attire - that's what happens when you choose to fish and drink beer when the sun is out.
The rain cleared up this afternoon, so Julie and I walked the beach again, then we drove to the recycling center and ended up going to the nearby Bald Point State Park and walked the trails and some boardwalks.  The walkways are set up for handicapped access with really nice boardwalks and smooth fabric over the dunes for access to the beach.  We rescued a Horseshoe Crab that was lying upside down on the beach.  He was a little dried out, so we hoped that he made it - appeared to do well once he hit the water.  We saw a lot of hermit crabs and stopped to chat with a woman who was trying to catch a large crab that she could see from the pier, by dangling a turkey leg on a rope and hoping it would grab on.
Julie's Aunt called us around 9:00 tonight to let us know that Tropical Storm Colin is heading our way and there could be high winds, storm surges, flooding, and possible tornadoes.  We kind of gathered our stuff together to be prepared to evacuate if necessary.  It reminds me of 2002-2005 when we lived in Florida, although we weren't even close to the coastal areas then.  It's going to be interesting.
Posted by Bridge Coast to Coast Saga at 1:49 PM