Monday, June 6.  We made it through the night and now we have to decide whether to stay or get away.  The forecast doesn't sound quite as bad as it did last night, but the tropical storm is definitely hppening in the big bend area of Florida and we are right there. 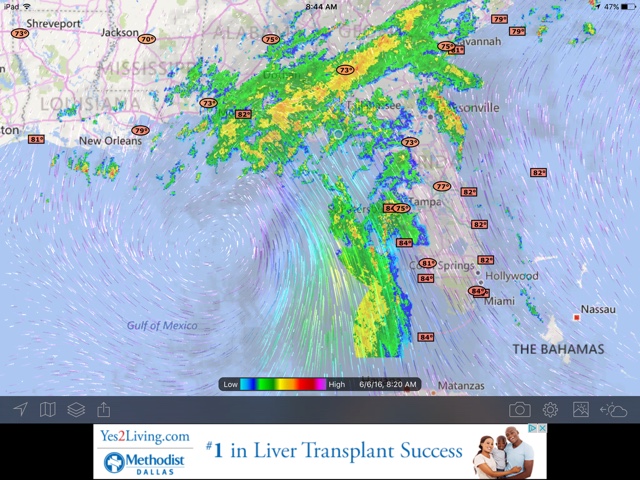 Pelicans are really active out on the bay this morning and Julie and I just spotted a dolphin breaching about 30 feet from the shore.  The predictions aren't good, but the media always seems to make it more than it is, even the weather.  It skirted us most of the day.  We took a little drive early this afternoon and a low stretch of the road was partially blocked off as the waves were coming in at 3-5 feet.
We bought fresh shrimp, came home and cleaned it and had yummy shrimp for lunch.  About 6:00 when it looked like we wouldn't be having any more rain, Julie, Ali, and I took a drive to see how that road was looking.  Now, it's closed off, parts are buckled, and the entire width of the road is covered with debris, sand and stones.  A channel 13 weather reporter was on the north end reporting live - big deal - I'm sure she was sensationalizing a bit.
Tuesday, June 7.  At 2:30 this afternoon, Travis Standlee was convicted of 2nd degree murder in the death of my brother, Ray, on September 5, 2015.  He faces 50 years in prison and won't be eligible for parole until after 35 years have been served.  He also comes to trial in August for the death of homeless woman who died in the same way and a day after he was released from jail because of inconclusive evidence in Ray's strangulation - I guess the jury found that it was conclusive.  Poor Ray, a slight man of 129 pounds fought for his life against a 230 pound man and lost. What a terrible way to die.

This photo taken just a few months before Ray died.
Julie and I must have walked 5-6 miles on the beach today, at 3 different times. Yes, I have more shells to sort through for taking to the grandkid's.
Wednesday, June 8.  Its our last day at the beach.  Darn - none of feel like we're ready to go home yet.  After our beach walk this morning, we got ready for Julie's Aunt Joan to arrive from Talahassee. 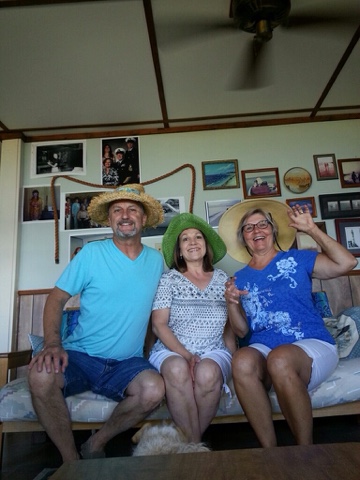 We had a great visit with Aunt Joan - she is an almost 90-year old very active woman, lots of laughs and stories and a yummy lunch (more fresh shrimp).  When she left, we headed back to the beach and searched for tiny shells, coming up with some baby ears, shark's eyes, volcanoes, slippers, and coquina.
Julie walked down to the beach on the bay side and spotted a horseshoe crab swimming near the shore.  It was still there when I got there, so I got it's picture, not the greatest shot though. 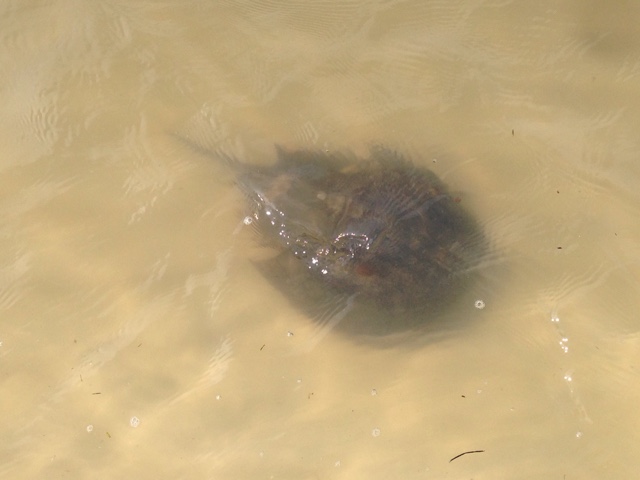 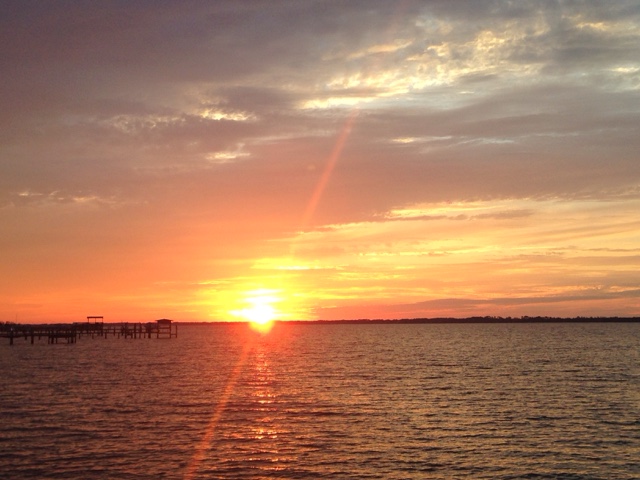 Our last Gulf sunset for a while.
Thursday, June 9.  We were cleaned up, packed up, and ready for the road by 8:30, had to stop in town to make a quick return at the hardware store and then on to Aunt Joan's to drop the key off.  We had spotted these old truck along the road on our way down, so watched for them so eye could snap some photos.  Every time I look at them, I think about the movie, "Cars". 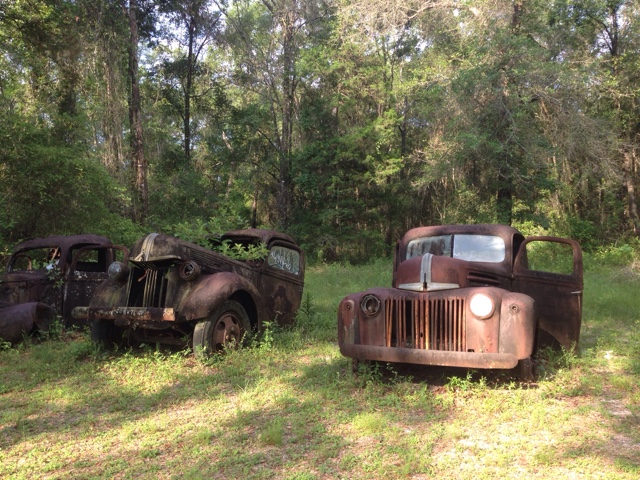 We drove until about 6 pm and stopped for the night in Holly Springs, TN, just south of Memphis.  The gal at the motel suggested a nice little Mexican restaurant nearby and we had a great dinner and one of the nicest servers I've ever had, a cute smiley faced Guy named Edwin who was from Guatemala and he was just so attentive and friendly - he made our dinner an experience.
Friday, June 10.  We were back on the road by about 9:30 this morning and today's drive took us through the beautiful hills and small towns of northeastern Arkansas.  We stopped at a little town called Mammoth Springs and had lunch on the deck overlooking the Spring River.  I had fried chicken, white beans, fried okra, and pickled beets - everything was yummy!  One more stop at the little town of Hardy, we strolled the Main Street and browsed in a couple of the shops before the final drive back to Springfield.
Sunday, June 12.  I got packed up and headed for Rene and Mike's house, got setup, although on a bit of a slope, and we talked and talked and talked some more until bedtime.  Some of our talking was done with some of their neighbor's at the boat ramp near their house.  Mike fixed us a really yummy dinner of roast pork, potatoes and carrots.  We retired pretty early, as Rene and I are heading to Wichita tomorrow for a 2-day visit with our brother, Ron.
That trip went just fine, about a 4-hour drive and naturally, Rene kept me laughing a good part of the way.  Ronnie was so happy that we came to visit.  Our first stop was at his house where we met his 2 cats and got the tour of his little bachelor pad.  He has lots of musical instruments, so we got to hear him play harmonica, guitar, and mandolin. 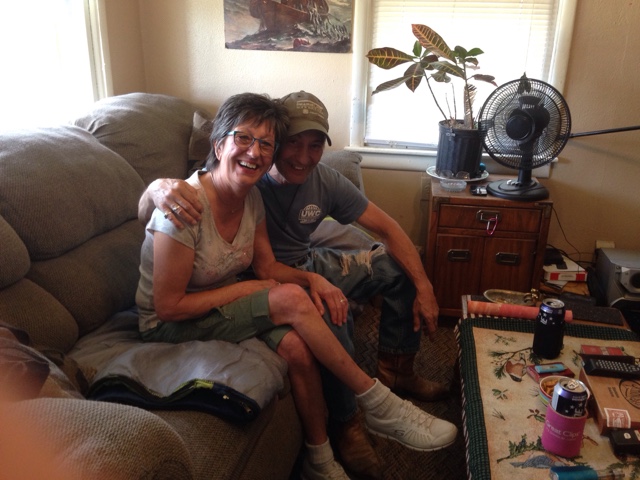 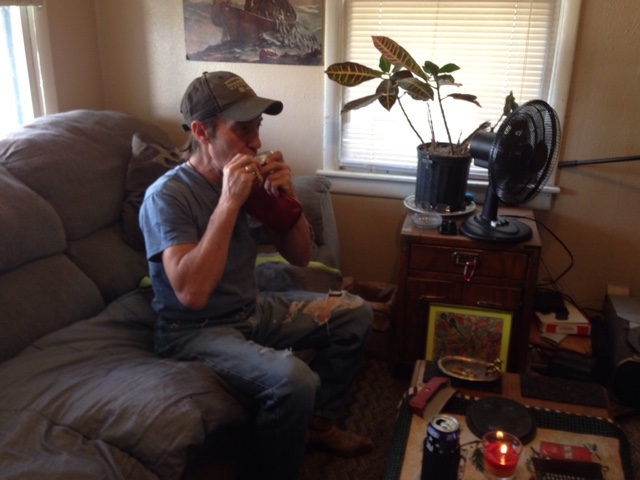 After that, we drove to the USI RV Park, checked in and sat at the picnic table yakking until it was quiet time, when I took Ron back home.  The park is very clean and well maintained and the folks here are real friendly.  I just had to take a photo of this strange tree that is just down the road from my site.  A tree is growing right through the center of the cutoff stump of another tree. 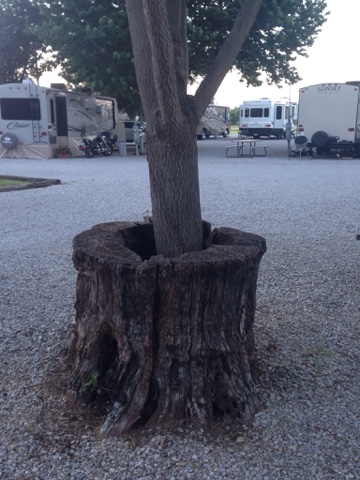 Posted by Bridge Coast to Coast Saga at 5:45 AM