Monday, April 17.  The reality of this move is starting to hit home. The house is nearly empty except for what I'm taking and what I'm leaving behind. Just about everything has been cleaned and readied for the new owners. The fridge is nearly empty and cleaned. I had period of boredom today because I'm trying to pace my self since I have more time than things to do at this point.

I had planned to bring the trailer over to the house on Tuesday, but got bored today and went and took care of that; topped off the LP tank, gave it a bath, and put air in the tires. Ready to roll.

Wednesday, April 19. How can it take almost an entire day to load up that little trailer that I have? Well, yesterday it did, and I had only about an hour to rest a bit before going over to Jan and Jim's for happy hour and pizza with Bruce and Carmen, Connie and Kathy for a little while (Chuck was under the weather after having a chemo treatment in the morning). As usual, we had a great visit and lots of laughs before saying farewell until the fall.

And then again today, after a couple of errands in the morning, I got busy loading the car with everything that was left behind that I needed to live with for the last week and a half. I was just ready to load up my bike on the rack when I realized that my lock is in the UBOX in Minneapolis, so I had to go get a lock for it. I got the bike loaded and the car hooked up - ready to roll in the morning.

And speaking of the UBOX - it has already arrived in Minneapolis.

Connie, Loretta, and I went to see Dale Watson at the Rhythm Room tonight, arriving early enough that we were about the 6th in line to get in.  The show was great - quite different from last year when he was there with his band, the Lone Stars.  Tonight it was Rosie Flores (recently won Female Rockabilly Performer of the Year), then Dale performing solo - he played 2 of my requests, "I Lie When I Drink" and "Country My Ass" and he also gave the 3 of us some grief when we bought him a shot of Jack. I guess he thought we should have each bought him one. A tequila showed up right after the Jack and he mixed them together and called it Whisquila.  What a character.  And then came Jim Heath (aka The Reverend Horton Heat) and he played a great rockabilly Gretch guitar and there is some real talent there.  At the end, they all played together. 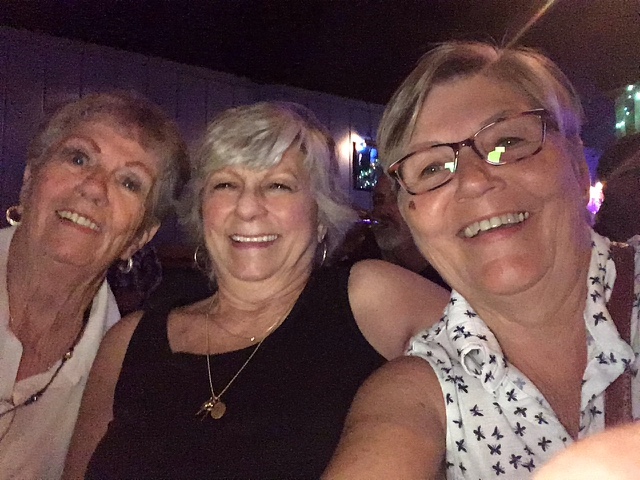 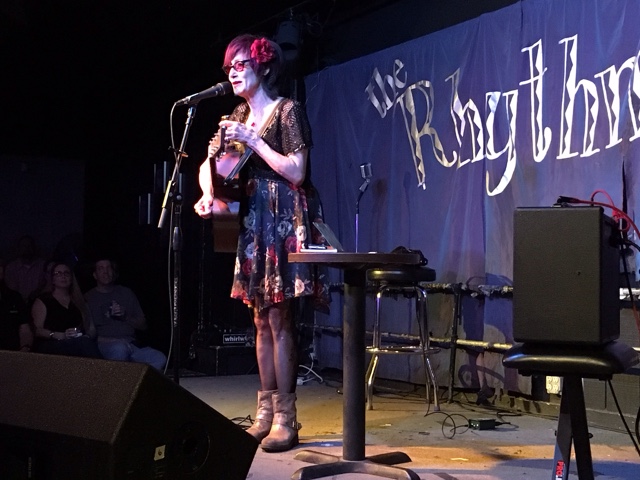 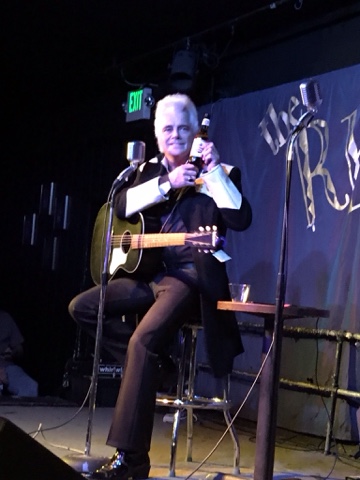 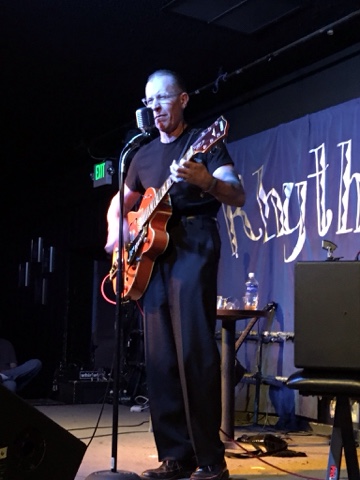 Thursday, April 20.  Tom and I both pulled out around 9:00 as planned and I watched my familiar favorite landscapes drop behind me; Highlands at Brentwood, Red Mountain, Four Peaks, Bush Highway, Saguaro Cactus, and we started the climb up to Rim Country.  We topped off our gas tanks in Payson and Holbrook, stopped at the first rest stop in New Mexico and filled up again in Grants before stopping for the night.  It was a good day but a long one too.

Friday, April 21. Happy Birthday to my sweet sister-in-law, Penny - you are a one-of-a kind, sweet gal and I'm so glad that you chose my brother to spend your life with.  Love you!

Tom and I started out right on time this morning, we both had a full tank of gas and intended to stop for gas again at exit 194 or 196 in Moriarty which is east of Albuquerque, but we turned north on I-25 at about exit 159 heading toward Santa Fe.  I was in the lead, had plenty of gas and expected to stop somewhere north or Santa Fe to gas up.  No gas stations.  So, that's ok, we will stop in Las Vegas, NM - but when we got to Las Vegas, none of the info signs along the interstate showed any exits for gas stations, so we thought maybe further on down the road. Twice, I pulled over to see what Tom was thinking, and we decided that we had to keep going.

The scenery between Santa Fe and Las Vegas is gorgeous.

My gas gauge was well below a quarter of a tank and I was starting to panic, when Tom calls to tell me that he thought he saw my license plate go flying off the back of the Gypsy, he had pulled over and thought he knew where it landed and would go fetch it.  I pulled of the road, went back and checked, and sure enough, the plastic mounting bracket had broken he there was no license plate.  I waited for a few minutes and it wasn't long before he called to verify that he had found a New Mexico plate - was that mine?  What a joker!  He had it and headed back towards me and then it was only another 60 miles before we were at our destination at Raton.

I did see some wildlife today - a few mile deer grazing back in a meadow.

I'm not sure I would come back to this KOA, but then I'm also not sure of the other options around here - they might all be the same.  I would hate to see what this place is like after a good rain.  I got to see the grandkids and Ben on FaceTime tonight - they could tell that I was in the camper and were wondering if they could go camping with me again.  Of course, and I am looking forward to it.

Saturday, April 22.  We only had about 3 hours of driving to do today, so we took our time getting ready to go. Unfortunately, it was only 36 degrees, so not like we felt like hanging out outside.  We were only 40 miles north of the New Mexico/Colorado border when traffic stopped along the highway and someone was walking in between the 2 lanes and directing people to move to both sides in order to keep the center open for emergency vehicles.  It wasn't long and we saw an ambulance go across the median and down the highway to the south.  And then we learned that there was a fatality and it was going to be a long wait.  A car was flipped on the passenger side on the side of a small hill, from where we were, it looked like it took a nose dive into the side of the hill.

Soon it was an hour, then they started diverting cars and trucks without trailers through the median, and driving south to the next exit to a road running parallel.  There was no way that we would attempt it because of the steepness of the edges of the median.  A fire truck was angled in the road ahead of us and emergency vehicles kept coming.  A State Trooper came along and told us that the traffic would not clear until the coroner got there and the body could be moved. We could see investigators taking measurements and photos. Two hours had passed.

When they finally started to clear the left lane, we learned what happened. The guy in the Chevy Tahoe went off the road and when he corrected, he hit a bicyclist (the person who died) then went off again and his car flipped around and landed on its side.  Three hours passed, and then we were allowed to go again, passing the debris from the accident.  So sad, I'm glad that I couldn't see any of it.

We arrived at Tom's sister, Joyce and her husband Burrall's house around 4:00. We talked and talked, I got a tour of their property - 7 acres in an area of homes with attached airplane hangars. The build planes! How cool is that?  Frisco had the time of his life running with Lily and chasing jackrabbits around. Joyce served a delicious dinner and we talked and talked and talked some more.

Sunday, April 23.  I woke up this morning to the sound of an airplane taxiing toward the runway - quite a pleasant way to wake up.  I had my coffee and then took Frisco for a walk and then Joyce was up and moving around so we talked a bit.  We hung out in the yard, waiting for Burrell and 3 of his friends to take off in their planes and after a while, they flew by in formation - that was pretty cool - not something I get to see every day. 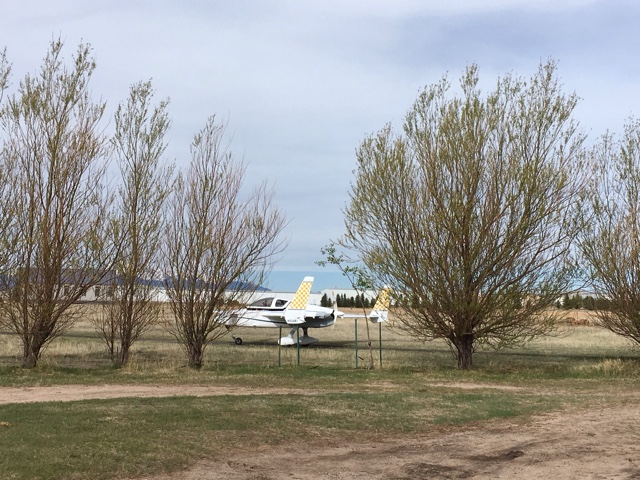 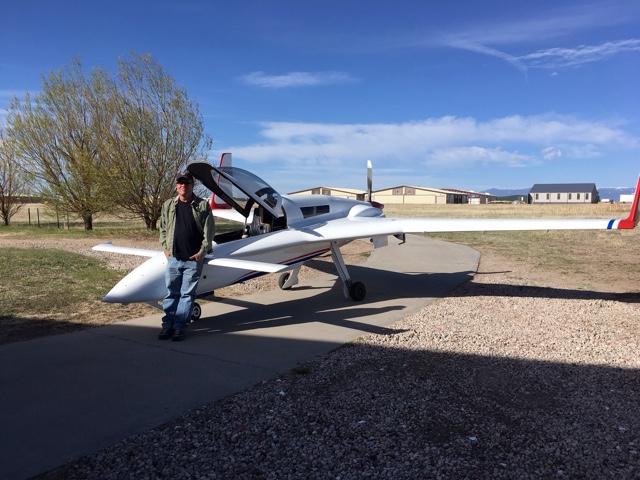 When he got back, we drove to Garden of the Gods park and walked along the paths through the gorgeous rock formations.  I really did not expect to see the red rocks here. It was a lot like Sedona, AZ with giant boulders balancing on top of others, tall spires reaching toward the sky.  Unfortunately, there were lots of other folks enjoying the park today too.  Regardless, I enjoyed it and think the others did too. 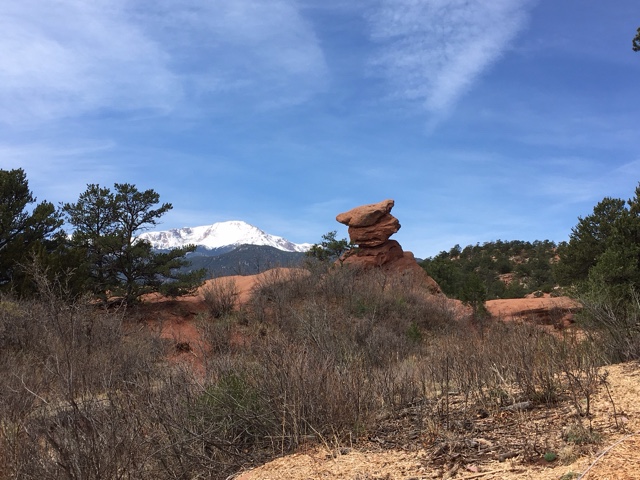 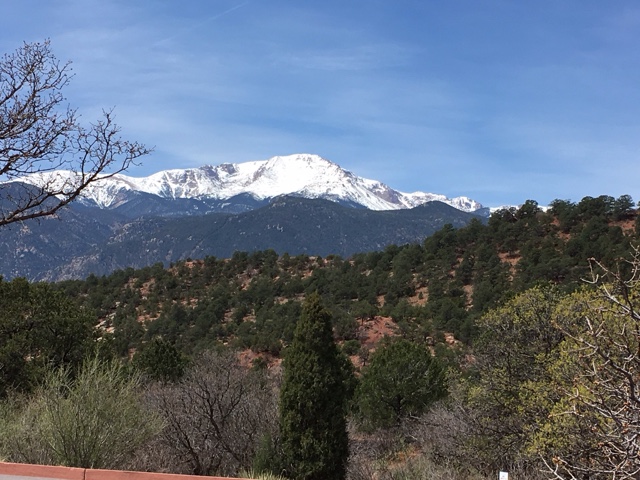 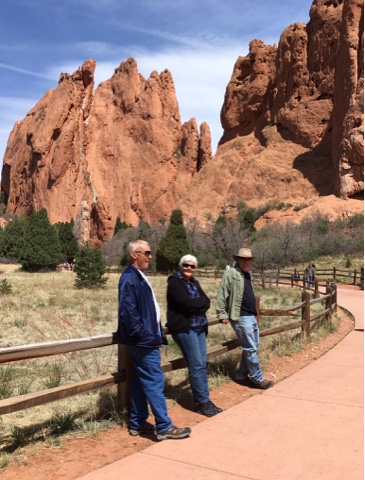 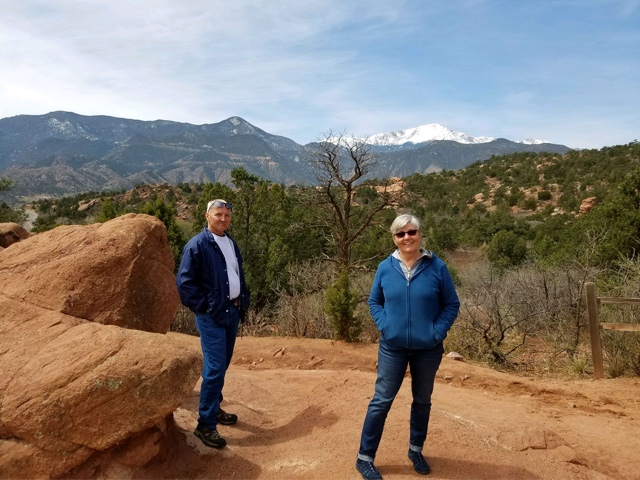 And then tonight, we had another delicious meal - ribs, coleslaw, veggie salad, dinner rolls, and beans. Mmmmmmm!

After dinner, Joyce, Tom and I took the dogs and walked around the hangars - a huge place that can house about 400 planes. I certainly understand why they like living here - gorgeous views and wide open spaces and the ability to take off and fly whenever they want to.

Posted by Bridge Coast to Coast Saga at 9:21 AM