Wednesday, June 21.  I have been on the phone a lot this week, trying to arrange for doctor and dentist appointments, arranging for my dental x-rays to be sent to MN, reporting a hail damage claim to my RV insurance company, and then getting set up to get some estimates.  Most of the last 2 mornings were spent researching and making calls.  Yet, it seems like I have gotten nothing accomplished.

I've taken some good, long walks with Frisco, trying to get in at least 2 miles a day.  I also did some research trying to find a Silver Sneakers workout class in the area - had some success, but the sessions were starting this week and I will be traveling for 2 weeks during the session.  So, the next best thing, a senior workout on You Tube and I  quit about 15 minutes into it because it was hurting my knee.  I'll have to find a lower impact workout to start with.  I just have to lose a few pounds.

I will be picking the girls up after school this week, starting yesterday.  All went well until they started pushing and shoving each other on the slide in the back yard and Norah got all worked up.

Saturday, June 24.  After school pickups have gone well - we went to a playground on Wednesday afternoon and Thursday was a rainy day, so straight home to play Legos and do some drawing and story telling.  Their imaginations amaze me. Norah’s story was about a monster that went to the dentist and the dentist broke all of his teeth or a bear coming out of his cave.

I pulled the camper out of storage on Thursday and took it to a couple of RV Collision Repair shops to get estimates on the hail damage.  Both of the guys I spoke with had a feeling that my insurance would total it out because the damage would probably be more costly than replacement.  One said that his shop hasn't repaired one this year - they were all totaled out. They both agreed that the repair would have to be replacement of the aluminum roof panels and completely resealing the side to roof mounts.  It is a wait and see game from here.

Yesterday was my day with Charlotte but Ben took the day off so he could take Norah to the doctor (a follow-up on the effects if their gluten-free diet efforts). I told him that I was planning to take Charlotte to the Minnesota Sculpture Garden and that was exactly what he was thinking of doing with Norah, so we went together. The day turned cloudy and windy and cool and we weren't prepared for it, so after quickly seeing most of the sculptures, we had snacks in the van and then went to a playground that was a bit more sheltered from the wind. 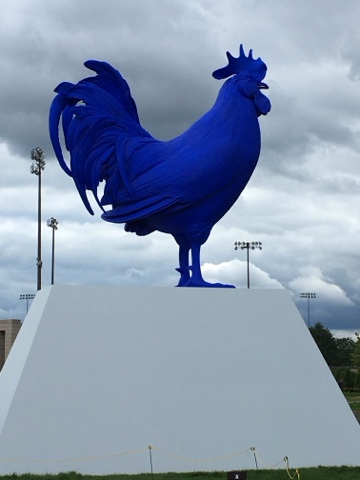 One of the many sculptures.

We had to shuffle car seats, so Ben took Norah in my car and I took the van that had car seats for Charlotte and Camille for after school pickup. When I stopped at my house to let Frisco out, I was keyless since Ben had my keys, but Elizabeth let us in.  Then, after picking up Camille, I realized I had no key for Ben’s house.  We would just have to wait for hm or Jill to return.  No problem, I had the garage door combination, so the girls entertained themselves by riding bikes. It was only a half hour or so before Ben got back home.

I stopped for a frozen pizza on my way home, ate and was in bed by 8:00 and slept through the entire night.

I went to a few garage sales this morning but am spending the day at home - relaxing, reading, maybe a movie, but not doing much.

Posted by Bridge Coast to Coast Saga at 11:46 AM