June Monday, June 5.  Our day started with breakfast on the patio of the Guest House, overlooking the pool.  The weather is warm and humid, just as I expected for this area.  The hotel is very nice, modern, and reflects some of Elvis' favorite things - like hot pink splattered here and there, a flavor of the 70s in some of the decor, wall lights that look like they belong on a space ship - but all very tasteful.  The service around here is a bit lacking though - little things, like the trash cans and ashtrays not emptied from the night before.  I know, I'm a bit anal about these things. 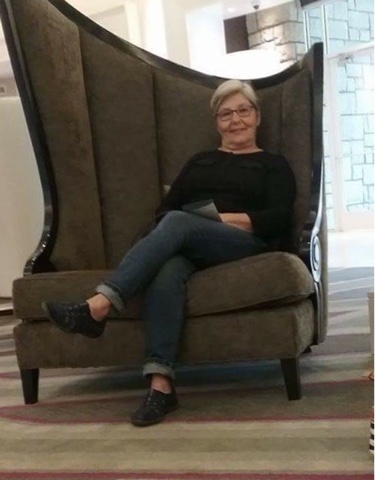 Elvis liked high-back chairs. This one is in the hotel lobby.

A shuttle took us to Graceland and we were guided to the entrance, given iPads and headphones, and we started the tour of the mansion. I don't remember much from our trip here about 25 years ago but I don't believe that much has changed in the house or grounds and it's gives a good feel for what life was like for the very rich folks of that time, although this house seems pretty modest to me.  There are TVs and mirrors everywhere, lots of blue - drapes, carpets, furnishings, and there is shag carpet on some of the ceilings and walls.  I do remember when that was a thing. 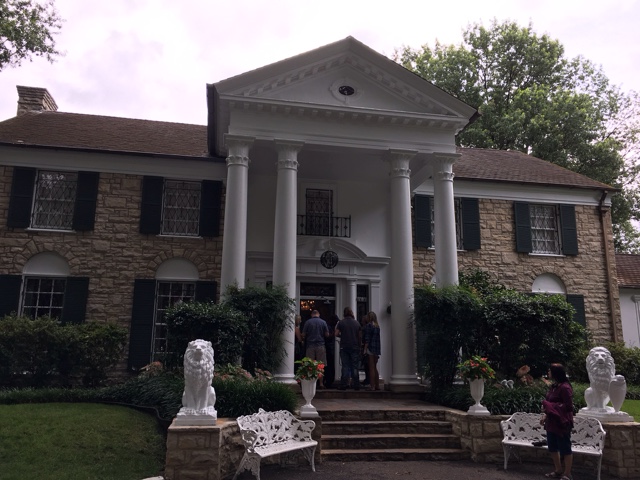 The TCB lightening bolt. This is 70's for sure! 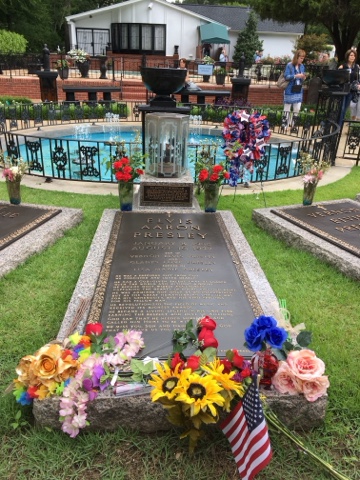 A new addition to the complex was a horseshoe shaped building that houses many different museums (fortunately for Elvis lovers, his father, Vernon, never threw a thing away) from cars to motorcycles to show outfits, to personal archives with receipts, books, jewelry, glasses, etc.  We had a bite to eat at Gladys' Diner and then headed back to the hotel by shuttle.

We tossed around going to Beale Street (possible rain and storms) or to Tunica to try our luck at the casinos and the Tunica casinos won.  After playing for an hour or so and not winning, we left again. Memphis BBQ was definitely on the agenda for tonight's dinner and my research told me that Interstate BBQ was the place to go and we were glad that we did.  Nothing fancy, but the food was sure tasty. The beans were yummy, almost sweet enough to be dessert.

Back at the Guest House, we sat at the bar, had a (very pricey) drink and listened to some live music before turning in for the night

Tuesday, June 6.  Before leaving Memphis this morning, we stopped to wash the crud from the dirt road in Dyess, AR off the car, but the $6 donation we made at the car wash didn't remove it.dang, it looks worse now that it did before.  Maybe the downpours that we drove through today got rid of it - not sure, since it was raining when we arrived at our hotel.  I also stopped and got the oil changed since the "maintenance required" light came on.

The drive to Nashville was pretty and uneventful and we pulled into our hotel around 2:30. After resting for a short while, we hopped on the shuttle that took us downtown and dropped us off, just a short walk from the Ryman Auditorium where we would be seeing the "Stars for Second Harvest" show.  We had some time, so we stopped at Tootsie's Orchid Lounge and had local beer and got to hear some good music.  Then it was off to Lula's Cafe for a bite to eat before the show. 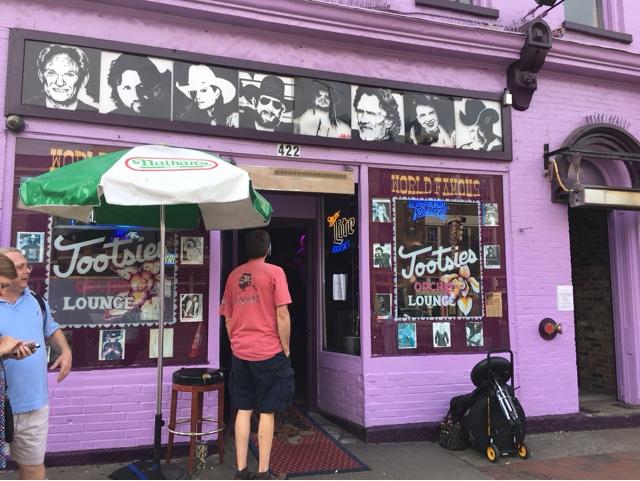 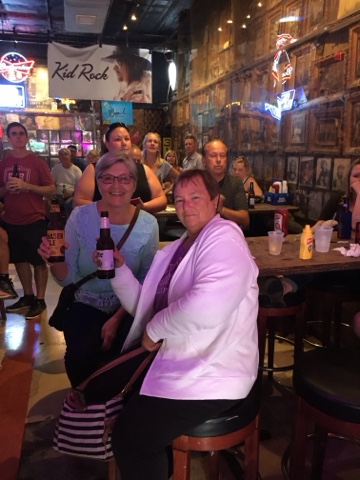 A young singer, songwriter from Minneapolis sat next to us and gave us the lowdown on tonight's show.  His name is Jake Scherer and I will have to watch for his name to come up on future hits.We were both glad that we chose this show that was emceed by Craig Wiseman, the 2015 Songwriter of the year, a colorful character who was quite entertaining.  We saw the Warren Brothers, who are coming up in today's country field, some new guy whose music I didn't like at all, John Rich of Big and Rich, and then the big guy, Blake Shelton came out and did a few songs.  They auctioned off a few items that brought the total for the fundraiser for Second Harvest Food Bank to $39,000 - and that called for a huge Yee Haw.

Anyone who knows me knows that I am not a fan of today's country music and this show reinforced that.  I am a fan of good guitar players and I heard a lot of that.  I agree with Dale Watson that it just ain't country - it sounds way too pop, rap, hip-hop, and everything else, but not country.

Wednesday, June 7.  Last night, we learned that there are 2 huge events in town this week - the Stanley Cup Hockey Game and the CMA fest, formerly called Fanfare, also starting on Thursday, so we want to avoid downtown on Thursday. And that means that we will miss the CM Hall of Fame Museum.

We had tickets for the General Jackson Riverboat Cruise today and the weather was perfect for it.  The boat is beautiful, the lunch was a very fresh and tasty buffet before the show started.  The show was representative of Tennessee's music history and the entertainers were all top notch.  After the show, the musicians headed out on the back deck and played an acoustic show.  I'm so glad that we decided to take the cruise, it was very enjoyable. 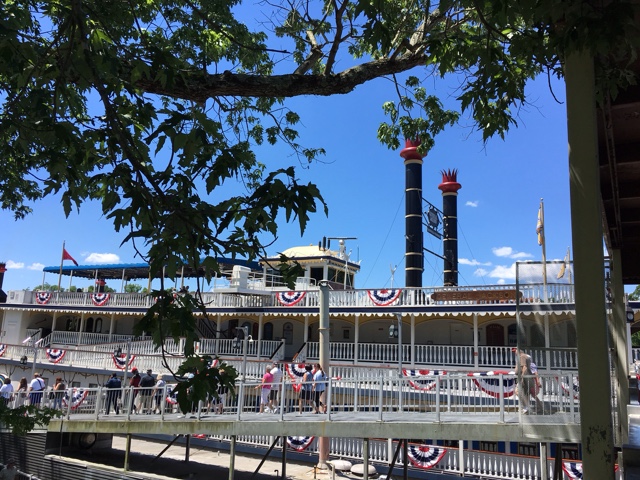 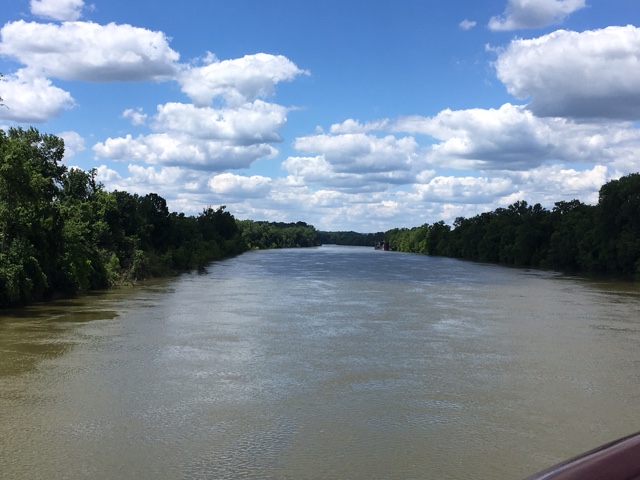 After that, we went to see the Opryland Hotel - where room start in the $300 range. I got the feeling that I was in Las Vegas.  Everything we saw when looking for show tickets at The Grand Ole Opry showed no Wednesday or Thursday shows but while talking to some people on the cruise, we learned there actually is a Thursday night show. So we went to the ticket office but the only seats available were standing room only. No thanks. 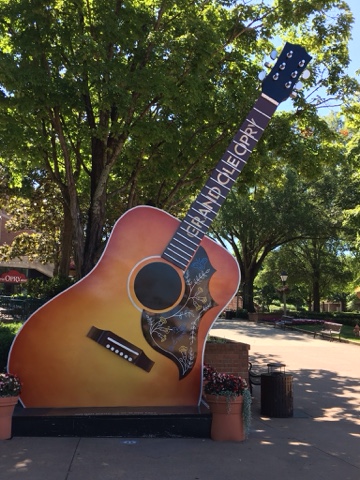 Knowing that tomorrow is going to be crazy downtown, we hopped on the shuttle and went. A local favorite restaurant, Pucket's Grocery had a 1.5 hour wait to be seated so we wandered on and stopped at a place called Tazzo and had a yummy Apple Chicken salad before heading down to Broadway.  We stopped at a couple of bars and listened the music, then at Alan Jackson Keep it Country bar and had a drink.  Neither of us are too fond of big crowds, so that was enough for tonight - we took the shuttle back to the hotel. 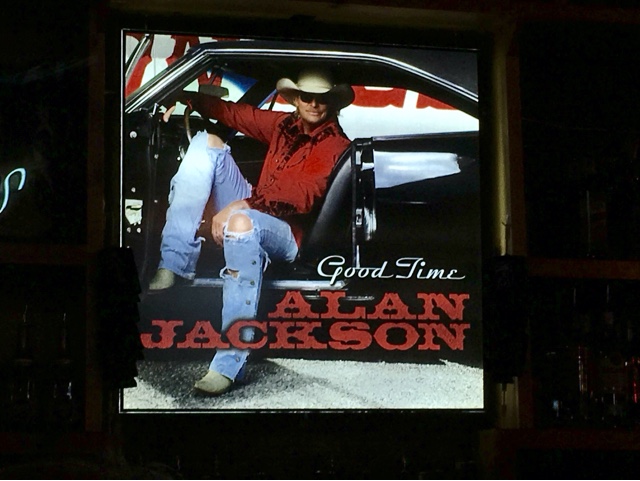 Saturday, June 10.  Thursday seems a long time ago to reconstruct the events.  Oh, I know.  We toured the Belle Meade Plantation, home to a family of thoroughbred horse breeders.  The bloodlines established at Belle Meade through one horse, Bonnie Scotland and other famous stud horses continues a legacy of speed and endurance that still dominates the Thoroughbred racing scene today. 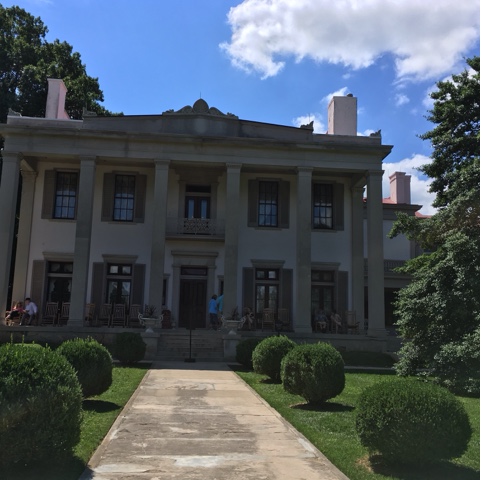 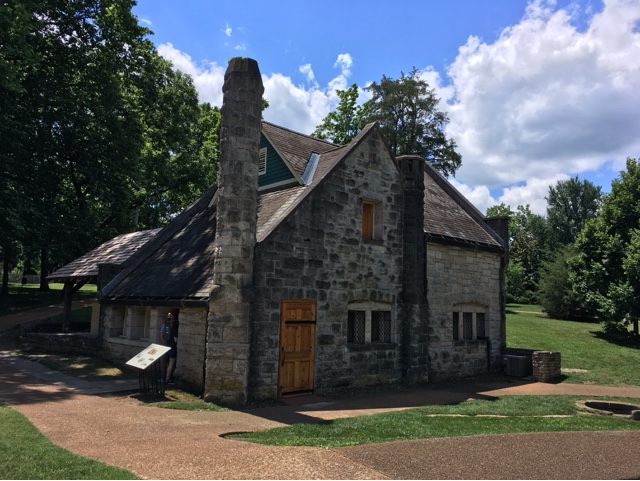 The grounds and buildings were beautiful - formerly 5,800 acres and down to just 38 acres today - including a winery where we got to have a few samples. There were many other beautiful mansions and stately homes in the neighborhood surrounding the plantation.

From there, we drove to Franklin, a nice sampling of a historic Tennessee town, complete with quaint shops and boutiques - oh, and yummy ice cream too.  Some gals that we met on the shuttle said that we had to go to Leipers Fork, a small community of local artists.  It was there, in a little gallery that I couldn't resist the purchase of another hand blown glass ball to add to my collection. 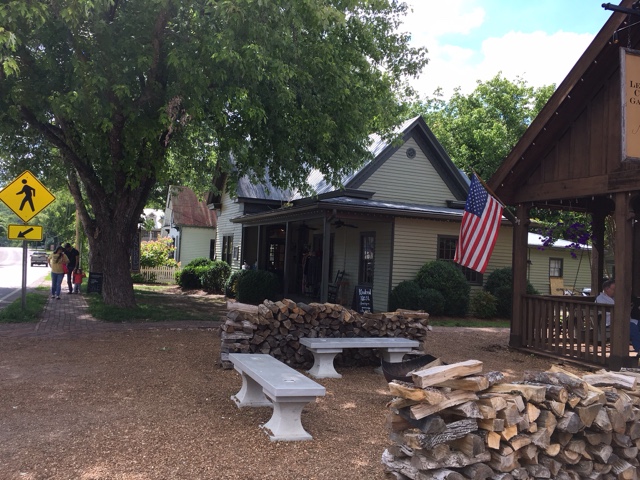 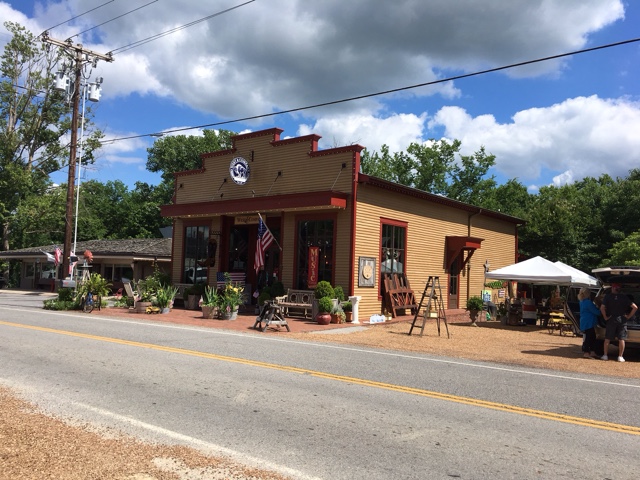 Friday morning after checking out of our hotel, we took about a 3 hour drive to Bruce and Carmen's (some Highlands and Brentwood friends) little cabin in the woods at Birdseye, IN.  What a great spot and it was so nice to see them again.  We talked and talked, Bruce played guitar and we sang a bunch of oldies, and we had a great dinner. Then they took us for a drive to see Patoka Lake, a huge Corps of Engineers reservoir and state park just a short distance from their cabin. And then it was off to sleep in their cozy little loft. 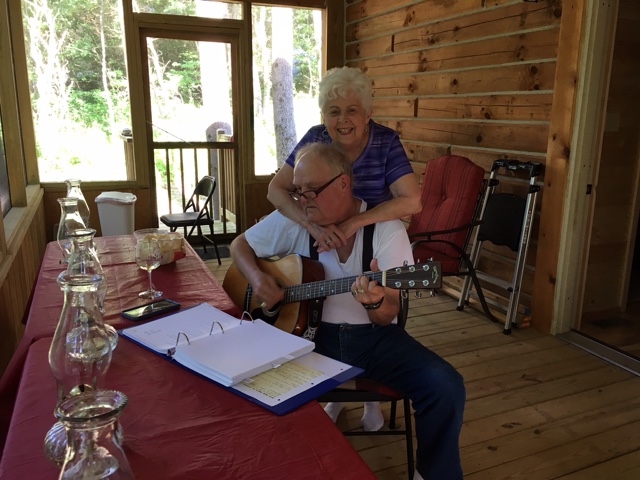 Today was driving, driving, and more driving - about 8 hours back to Portage to drop Sharon off and then to Montello to see my little dog at Pat and Rogers.  He had a good week out here with the deer, turkey, bunnies and squirrels.  It's been a great vacation and now, tomorrow, I get to see Pat. I am ready to feel his hugs again and to just hang  up and be together back in my old home town for a few days.

Sunday, June 11.  I was up and showered, had coffee and walked Frisco and on the road again by 9:00, headed for Pat's house in Stoughton. Dang, it felt good to hug him and Tracey - it feels like home here.  Since Savana moved out, I now have my own bedroom and that is so nice too. 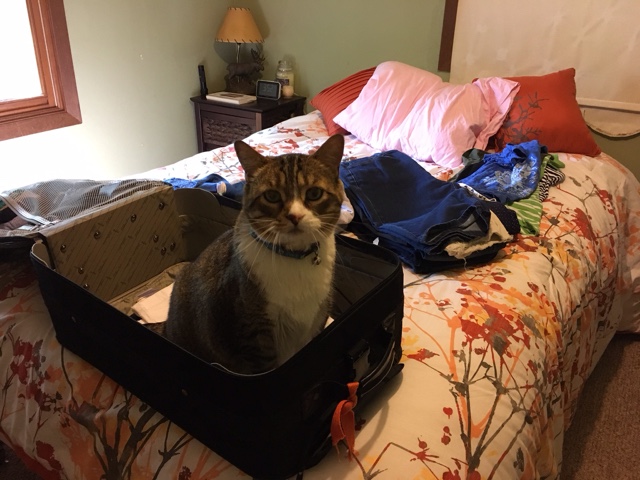 Coming in to Stoughton, I drove by our old house and noticed that there are about 5 lots for sale along the road - the Johnson family must be selling off their farm land.  It brings back memories and I have always loved that drive along Starr School Road where the the trees are canopied above you.  After turning toward town, I saw the many changes since the new Walmart has gone in at the intersection of US 51 and Hwy 138, even a roundabout.  It sure looks different.

We sat and talked, talked, and talked some more and I toured the yard to check out all of the flowers and veggie garden (the rabbits have eaten quite a bit already).  I always enjoy this, since many of the perennials came from my yard or I've helped to plant them - like old friends.  It's all looking good, although you lose some and keep some through the years.  Pat and I went to the grocery store and that is new too - under new ownership and remodeled.  Stoughton sure is changing - I'll see more of it in the next few days, as I plan to visit a few other friends and family.

Frisco and the cat, Kowroo are getting along just fine.

Posted by Bridge Coast to Coast Saga at 1:48 PM