Thursday, August 24.  This was my week for camping with Charlotte and 10 of my friends at Ft McCoy, the Pine View Campground - a military Campground that is open to the public - a beautiful place with every amenity you could want.  The sites were spacious, open, but yet enough trees and bushes to block the views of your neighbors.  The playgrounds were beautiful, the Trails well groomed and scenic, and the LaCrosse River was clear and fast moving.

Day 1, Monday - we arrived just in time to see the peak of the total Eclipse of the Sun (although we were not in its direct path, we only saw about 85 percent of it) - the last one was in 1918. Charlotte was not interested in it, but she did watch a little of it on TV from Jim and Sue's motorhome.  That's a good thing, because Ben was very concerned about the possibility of damage to her eyes from looking at it.  The eclipse glasses that I bought were just the thing, and everyone was very thankful for them.

Tom helped me get my awning up, just in time for the rain.  Once it let up, the skies cleared, turned a gorgeous shade of pink, and gave us a full, almost double rainbow.  Charlotte got Patty involved and the two of them set up a lemonade stand and she earned $4.36 - quite the entrepreneur! 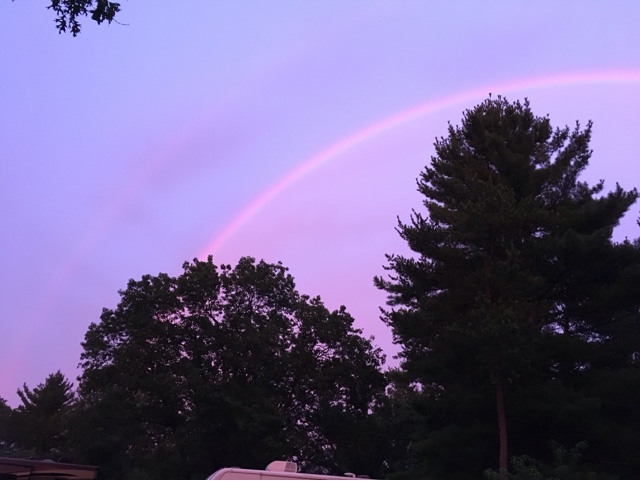 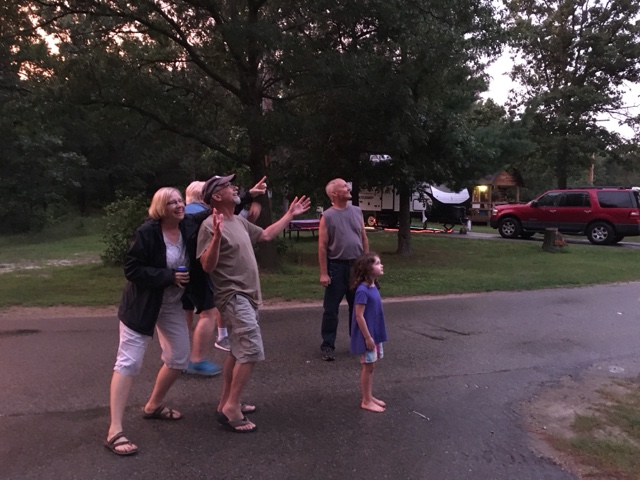 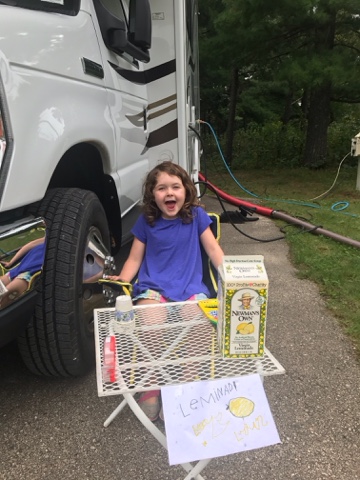 Tom and I had dinner duty, so he chopped veggies while I heated up meats and beans and we took everything to Jim and Sue's where we gathered for beef and chicken tacos, rice, and black beans for dinner.  After cleanup, the guys hung out there and the gals gathered under my awning before we all headed out on an evening walk.

Day 2, Tuesday. Patty made breakfast this morning, a yummy egg and cheese dish with English Muffins.  We all (except Chris) took a long, 2.2 mile walk along the river, spotted some deer, found the waterfall, played hide and seek with Charlotte, and she and Frisco got their feet wet in the river. 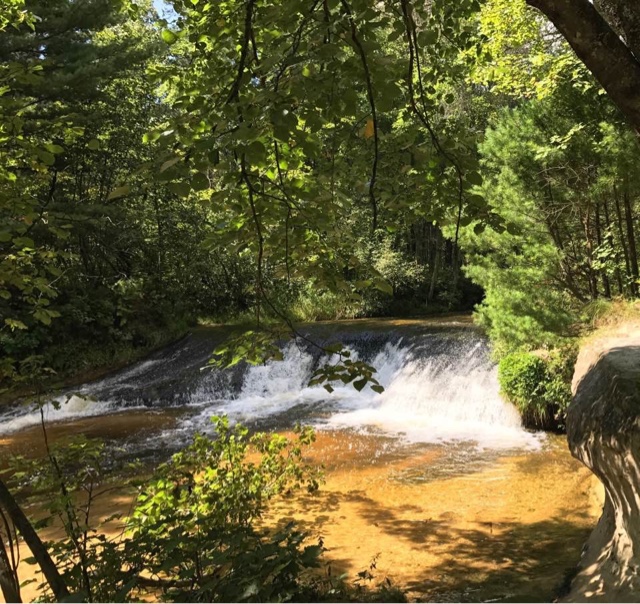 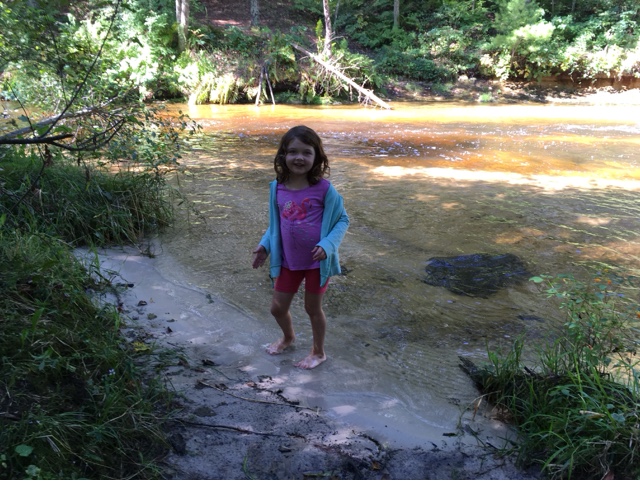 Michael and Donna showed up with their Granddaughter, Lena and she and Charlotte hit it off pretty well, playing house and drawing in my camper.  Tom and I took them to the playground and before we got there, they both got into rolling down the small hill at the beach - both covered in sand but could care less. 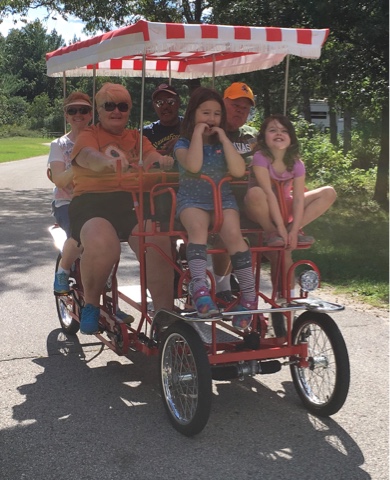 Chris made dinner - crock pot lasagna, salad, and pie - but we also celebrated Jim's birthday with cake and ice cream.

We gathered around a beautiful campfire, told stories, and laughed a lot. It didn't take long for Charlotte to fall asleep after a long and active day.

Day 3, Wednesday. Charlotte slept in until 9:45 this morning and got up just in time for Jim and Sue's breakfast - an egg and ham dish and fruit.  Then we took our morning walk, this time Charlotte wanted to see the spooky trail that we had discovered yesterday on the bridge by the waterfall.  One path led to some large, pretty life-like creatures - wolves, a bear, and a dinosaur, others to Halloween props.  Some of it was pretty creepy but she had a pretty good defense mechanism in place - and we didn't let her see the real gory stuff. 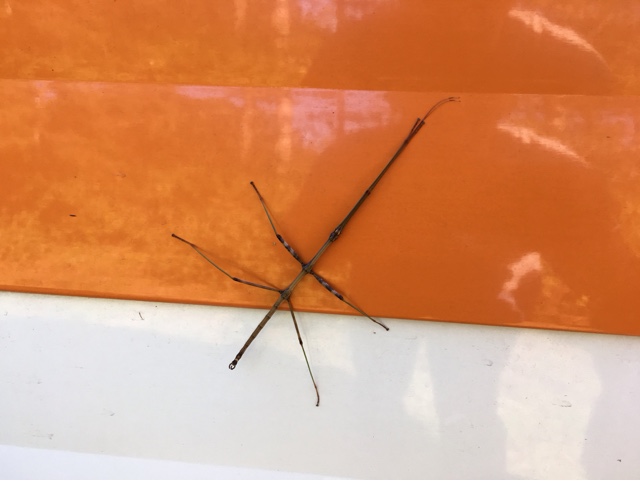 We found this guy who n the camper this morning.

She and Lena played, either at my camper or their cabin, but I think that all they did at the cabin was watch tv or movies and eat junk. 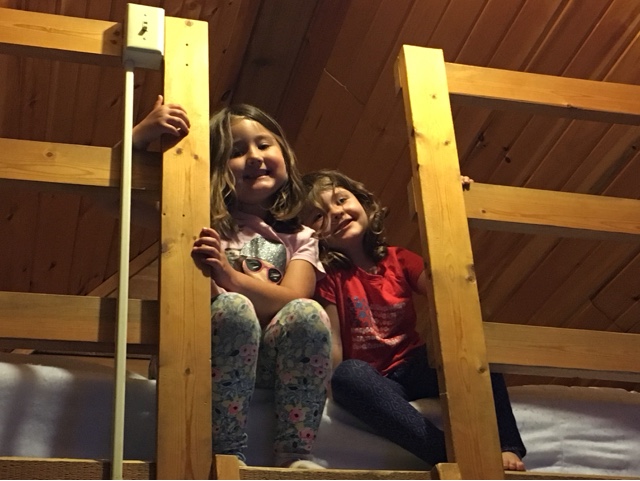 Checking out the loft of Patty's rental cabin.

Today was Mike's birthday, he would be 70 years old.  Jim and Roger made Old Fashioneds and we toasted to my life partner and a great friend.

Donna made dinner Wednesday nite at their cabin - chili, garlic bread, salad with all the fixins, and watermelon.  On the way back to my camper after dinner, Charlotte started getting cranky and complaining about not having dessert, demanding that she get marshmallows. She and Lena were "she said, but she said" back and forth, so I told her that she had to behave in order to get marshmallows.  She interpreted it that I called her a name and walked away to the edge of our campsite.

As I approached her to resolve the issue, she took off and started to run away from me. For the next 15-20 minutes, she ran - through empty camp sites and open, woodsy areas, along the river, she ran and wouldn't stop when I asked, pleaded or demanded her to - she darted one way, then another, always 20-30 feet ahead me and I couldn't run fast enough to catch her. I couldn't stop because I had to keep her in my sight. I was terrified a couple of times when I couldn't see her (she either tired and sat down or tried to hide from me).

Finally, Tom, who had stayed away because he initially thought that we were playing, realized it wasn't play and came to help me.  He finally was able to catch her and carried her back to the campsite, kicking and screaming the whole way. He just held on to her and she finally settled and I got her in the camper. He was a lifesaver - I was so terrified.  She calmed down, looking at a book, and then we had a long hug and got ready for bed.  We read stories and I talked to her a bit about what happened.  How scared I was that she would get lost, that I loved her and want to keep her safe, that I physically might not have been able to catch her, how scary it would be for her to be lost and that she could never, ever, do that again - with me or anyone else.

Day 4, Thursday.  Everyone packed up, said our goodbyes, and headed back home. Charlotte and I got back just in time to put Jill's enchiladas in the oven so they could get Charlotte fed and to open house at her new school where she got to meet her teachers for kindergarten.  I stayed with Norah and Camille, fed them dinner, and played until Ben and Jill got back home.

Back at home, I finished loading up the trailer and waited - check-in time was 4:00, I had planned to get there by 3:00.  At 2:00, I called the park and they said I could probably get into my site, as they had many cancellations over the weekend due to heavy rains. So I pulled out, drove to Baker Park Reserve, checked in and headed to my site.  Tom was just ahead of me, waiting to fill his fresh water tank.  We had 2 sites reserved and when I got there, I realized that Tom would never fit into one of the two, so I took that one.  But he wasn't going to fit in the other one either, plus it was on a slope and was a muddy mess.  I called the office and was able to switch sites and he fit in there just fine.

I made shrimp and Tom made a veggie salad for dinner and we sat under my awning, keeping out of the occasional rain, until it was time to say goodnight.

Posted by Bridge Coast to Coast Saga at 11:30 AM