Monday, August 7.  I dropped Frisco off at Ben's and headed back home to finish packing. Tom picked me up around 10:00 and we hit the road, heading for Duluth, stopping along the way for some sightseeing at historic markers and overlooks.  When we got to Duluth, we were headed toward the harbor when we spotted the Bent Paddle Brewing Company, took a detour but found a locked door - closed on Monday's.  We were both hungry, but we decided to head north along the coast and see what we came across.  The drive along Lake Superior was beautiful. 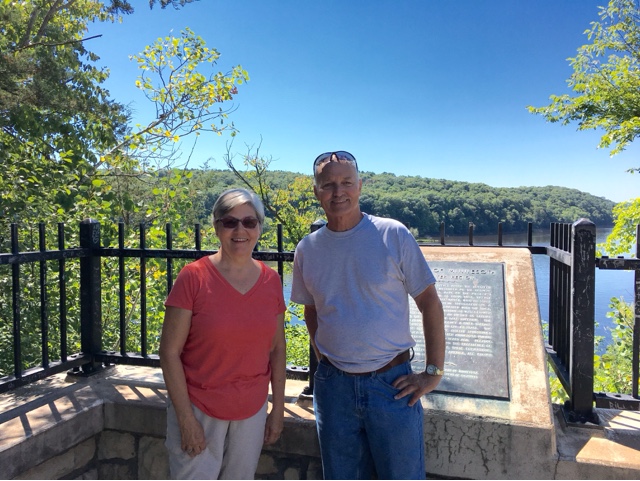 This is at an overlook on the St Croix River, looking south toward Stillwater. 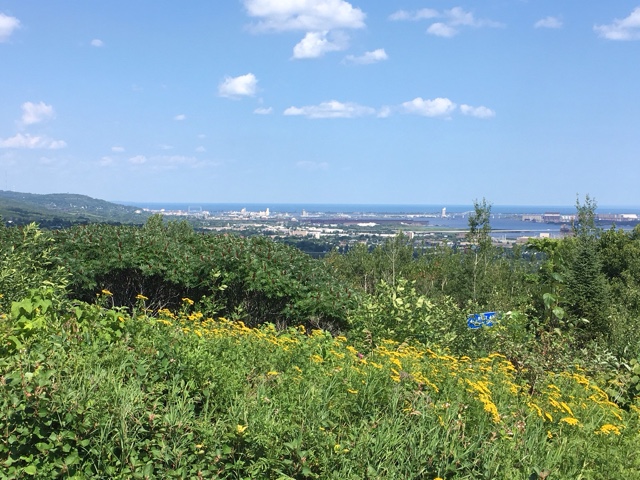 Duluth from a scenic overlook.

In Two Rivers, we stopped for dinner at the Blackwoods Bar and Grill for something to eat and drink.  I had Walleye and Wild Rice and it was yummy. From there, we headed out to see the Split Rock Lighthouse, a historic tugboat, and the Duluth and Iron Range Railroad.  And then we tried to find a place to spend the night.  I was hoping for a cabin but after many calls, learned that there were no vacancies and we ended up at a very clean and nice Super 8 back in Duluth. 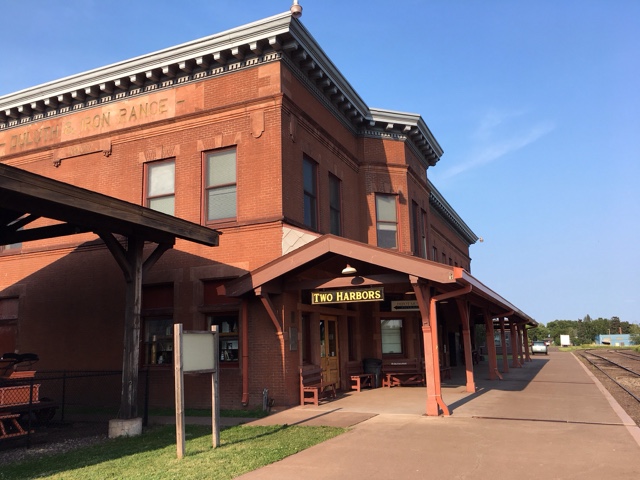 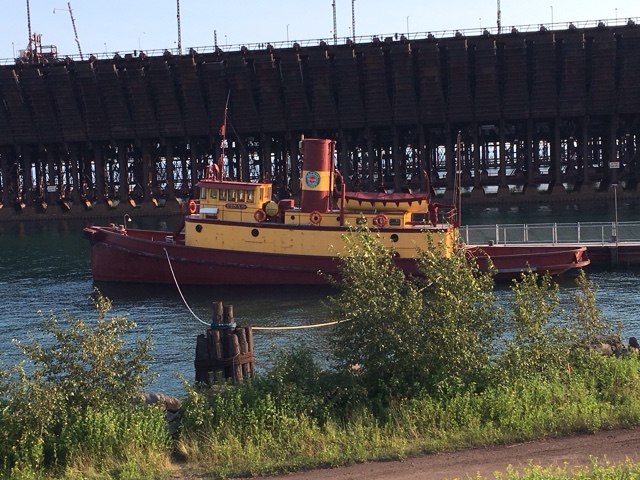 We both agreed that a drink would be nice, so we found a little sports bar just a couple of blocks away. It was loud in there with the music blasting and lively conversations with a bunch of guys at one of the tables, but we settled in at the bar and ordered a drink. It wasn't long and this young guy named Corwin approached us and announced that the Glen Campbell song that was playing was for us, compliments of him. We didn't quite get it - do we look that old? After that, he grabbed his beer and came to sit by us - telling us that he thought we might not like the loud stuff that they had been playing. So he picked another from our era - "What a Day For a Daydream" by the Lovin Spoonful - I could relate to that one, since that was the caption noted for me in the "Candid Comments" page of my senior high school yearbook.  We got some good tips on where to go in Duluth from this young native, talked about winters in Duluth, suggestions for local breweries and eateries, and then he headed back to hang with his friends. Nice guy but kind of a strange experience.  The next morning, we learned that Glen Campbell had passed away - a couple of strange coincidences with someone I've never met before.

Tuesday, August 8.  On Corwin's recommendation, we headed off to Jay Cooke State Park this morning, a beautiful piece of land along the St Louis River with fast moving white water and cliffs that were mostly hidden along the hiking paths. We learned that the park was named for the person who donated the land and that it was built by the CCC back in 1939 and included a swinging bridge over the river and the River Inn.  The view from the bridge was gorgeous, kind of reminding me of Glacier National Park where the color of the rocks and stones were variations of grays. We hiked the river trail, climbed the rocks to get a view of the waterfalls, and then hiked one of the paths through the woods. 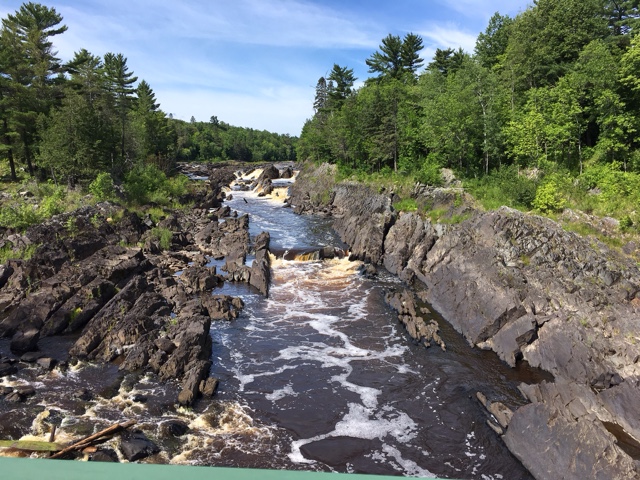 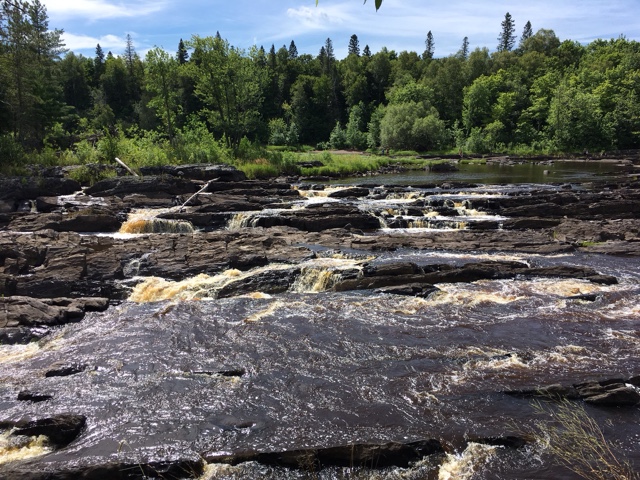 After our hike, we stopped at the Streetcar Kitchen and Pub in Carlton for a delicious lunch and a beer and watched the local cop directing traffic to allow these huge, long trucks and trailers to get by.  On our way out of town, we could see that they were loading these huge pipes off of train cars and hauling them away.  There was lots of activity in that little town.   After lunch, it was almost 3:00, so we decided to make another night of it and we headed toward Brainerd.  I got on the phone to see if we might find a cabin for the night, but again, there was no vacancy anywhere - most of the resorts rent only by the week or more.  We passed the Country Meadows Inn in McGregor, did a u-turn and went in and learned that they had a room for the night and the Fireside Restaurant and Pub were right next door. Perfect.

Wednesday, August 9.  After having a nice breakfast at a little roadside diner in Aitkin, our destination was the Charles Lindbergh State Park, just south of Brainerd.  We were having some rain now and then and after paying the daily fee to get in the park, we kind of regretted that we didn't just drive through.  The few buildings were run down and dilapidated, the mosquitos were prolific, and the rain had picked up so we didn't even see the boyhood home.  We drove down the road a short distance and came upon the Charles Weyerhaeuser Museum in Little Falls and went through that instead.

Heading back home, I t was a nice drive on the Great River Road along the Mississippi and it eventually got us to St. Cloud and then back to Minneapolis.  It was a great road trip and we learned that we really travel well and have a lot of fun together - a very nice time!

Sunday, August 13.  Nothing to write about on Thursday - I never even left the apartment except to get some fresh produce.

My Friday with Charlotte was a good day - we started by playing with her new Barbies, a gift to recognize her last day at Montessori school. Later on, we met her maternal Granny at the Arboretum for a morning of exploring the various gardens, kid stuff, and getting through the maze, followed by some lunch at Potbelly.  I picked Camille and Norah up after school, we rode bikes and played for a while before going to Cafe Luce for pizza and a beer.  I had planned to hang out after the kids went to bed, but that didn't happen - we were all pretty tired and ready for some down time. 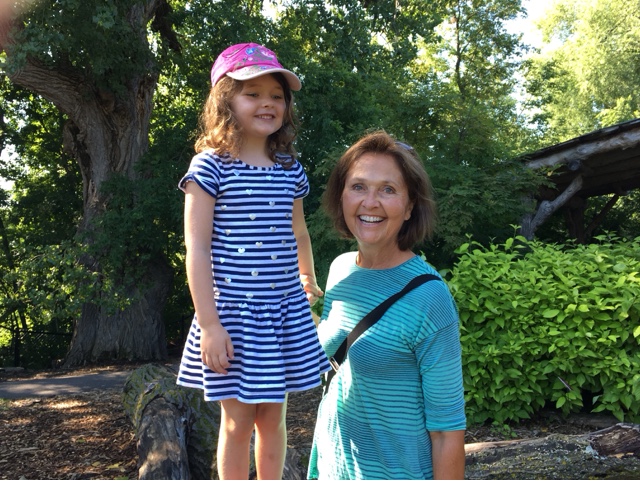 I'm taller than you are, Granny!

I packed a bag and headed to Faribault to meet up with Tom on Saturday.  The Blue Collar BBQ and Arts festival was going on downtown and I didn't want to drive back to the city after having some beers.  Also, there were a couple of events going on in Owatonna on Sunday. I didn't realize that the Tilt-a-Whirl was manufactured in Faribault and also had an F-town Nut Brown Ale that was yummy! It seems like a very nice town and the people are proud of it, as seen at this festival. 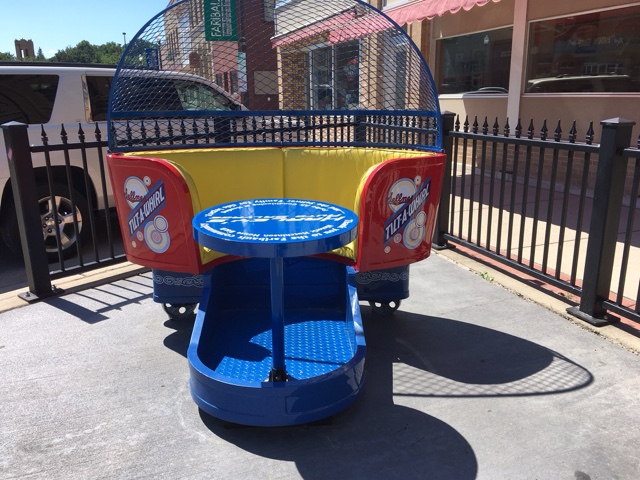 The first 2 bands that we saw were great, JoyAnn Parker had a very nice voice, the band was talented, and the tunes were lively rock and blues. The next act, Son of a Bueller described their music was 80s music with a twist - and that it was - two of the guitarists played miniature, kid sized instruments and the lead female singer played an accordion.  It was very entertaining!

We went back to Tom's trailer to walk and feed Frisco, then went back to the festival to hear the last 2 bands.  Well, we were both disappointed with Tim Mahoney, the local Guy who made it to The Voice, but lost out - it was a solo act and the style of music didn't interest either of us - today's country that doesn't sound country, no rocking beat, and was kind of boring.  So...we walked around the downtown area, to a local park and across a walking bridge that stretched over the Straight River where we chatted with some locals for a little while.  It was another hour before the headliner band was to start, so instead of sticking around, we went back to the campground and had a campfire.

Today, we considered the Pirate Fest in Owatonna that took place at a park along the Straight River.  When we got there, it had started to rain so we just checked it out from the parking lot, we learned that it was mostly for kids and we decided it probably wasn't worth the $10 admission and didn't go in.  We went to the Village of Yesteryear instead and even though it was closed today, it was very entertaining.  A collection of old buildings from this area, they all had a description placard on them describing where they actually came from.

We noticed a lot of RVs parks at the fairgrounds that is adjacent to the historic village and so we walked over there to check it out and discovered that they were most likely there for the Steele County Fair that begins later next week.  There were RVs everywhere.  The El Patron restaurant was just across the street so we stopped for a bite to eat and a beverage before heading back to his trailer.  Another nice day!

Posted by Bridge Coast to Coast Saga at 10:12 AM