ITuesday, August 1.  Shopping - my activities of the last 2 days - for shoes, for groceries, for wine, and a Costco run.  My groceries cost me nothing because my landlady gave me a $75 gift card for Trader Joe’s - it was a thank you for taking care of her cats while she was on vacation and for the work I have done in the garden.  Very nice!

I met Ben and Charlotte at the playground for her soccer lesson and game. Her skills have improved but she sure wasn't focused on the task at hand.  Her mind was on getting back home for the National Night Out block party in her neighborhood.

Thursday, August 3.  Brrrrr! We barely made it above 60 degrees today - what a surprise! It feels like October.

I had an initial appointment with a doctor yesterday, to establish a relationship and I really liked Dr. Jodi Milburn and her assistant at Park Nicollet. We had a nice conversation, she was patient and encouraging, will issue my pr scriptions, and will review the records that I requested to be sent from Mesa and if there are no issues, I will see her for my first wellness checkup next summer.

Tom joined me for dinner last night and I made spaghetti and meatballs at his request.  I knew that he doesn't get much home cooking, so I offered to fix whatever he's been hungry for and it felt good to have the sauce simmering in the slow cooker and making the house smell really good.  I have done very little cooking since getting here and sometimes, I really miss it.

After dinner, we walked through the woods that is across from my house.  It takes up about a three square block area and has paths zigzagging throughout.  I have been wanting to check it out, but not really interested in doing it on my own. I have been told by neighbors that it is kind of designated as an off leash dog park and we came across a few of them and all were well behaved. We also came across a couple of boys who were building a teepee and it reminded me of my boys when they were growing up. Also, it was nice to see city boys playing in the woods and not being at home on their devices. Thanks to Tom, I got to see what it's like, but still, I probably won't be walking through there on my own.

Today, I drove to Faribault where Tom is camped for the next few weeks.  Since it was a cold and rainy day, we went in to Owatanna and saw the movie, "Dunkirk", the story of a World War II battle where 300,000 men were rescued from the beach by civilian volunteers and their boats.  It was intense and I sat on pins and needles throughout the movie.  After having a pizza at Reggies  Bar, we set out to find the Sakatah Trail, found it and walked along the beautifully paved woodland trail, a paved hiking, biking, and snowmobile trail that goes all of the way to Mankato. 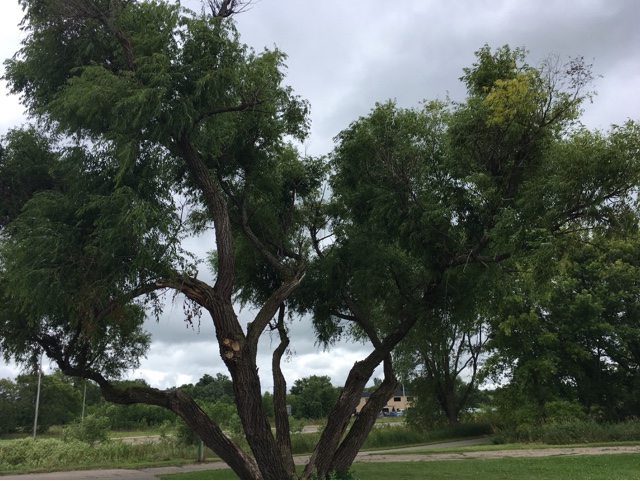 I love this clump of Willow Trees on the Sakahta Trail

Well, I was called on to help with school drop-off yesterday and since I spend my Fridays with Charlotte, I didn't see it as a problem.  There was a bit of sibling rivalry on the way to school (Charlotte pulled Camille’s hair and loosened her pony tail), and that resulted in a bit of a meltdown from Camille. She didn't want to get out of the van, but I was able to comfort her and hand her off to the teacher, she gave me a quick hug and went on her way.

Charlotte was wanting to do paper dolls, so that was a good part of our activities for the day, other than a couple of walks with Frisco and a stop at the playground at her new school.  She is definitely maturing and gaining confidence, as the only other kids on the playground were about 6 boys playing together.  There was a time when she would be timid and not want to play there, but she went about doing her own thing and it wasn't an issue at all.

The kid’s imagination just amazes me.  We played Santa Claus - two sisters, she was the oldest and I was the youngest. We faked sleeping, and when she heard a thunk and a bump, she announced that it must be Santa Claus. So she snuck over to peek in his lumpy, bumpy black bag and got caught in there. I had to go rescue her and then we found that Santa had left presents. She even made cards and put them on things like  my sewing box, her toy bird named Coconut, and Frisco’s chew toy.  And we did this over and over and over again.

We also made paper dolls. Again, she was the big sister, age 14 and I was the little one, only 4 years old.  Here’s her doll and a couple of outfits. 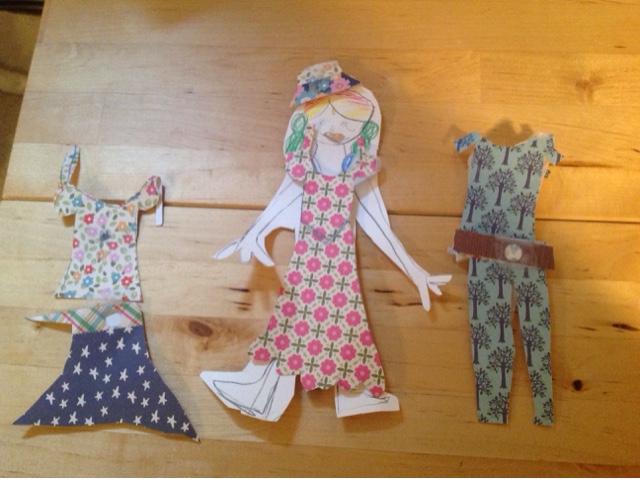 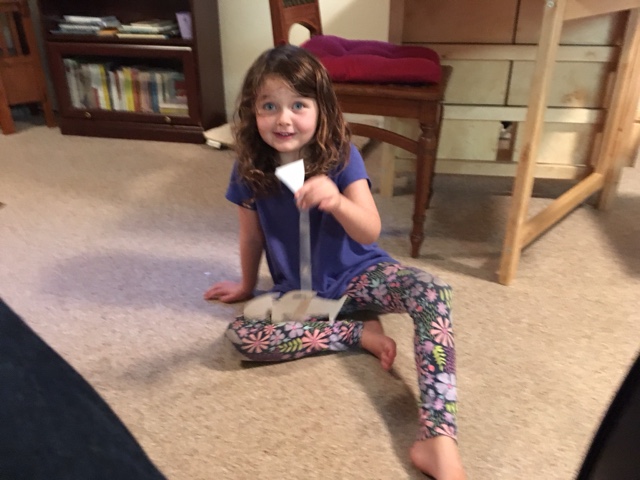 This morning we walked to Bruegger’s for breakfast and Jill met us there.  Back at my house, we talked, had more coffee, and played a bit before they left.

This evening, Tom picked me up and we headed for Stillwater, where my friends, Bruce and Janna had invited us to dinner.  After a couple of detours, around the Uptown Art Fair and the new Stillwater bridge, we finally made it.  I was surprised to see the bridge open, as I had come through there just 2 weeks ago and had to cross the river on the old lift bridge.  The bridge is beautiful and the view of it from their patio is very nice. 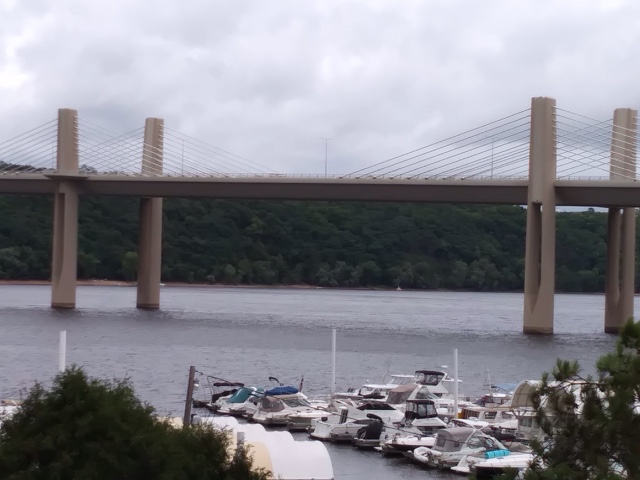 It is funny how things go when you only see friends once a year but are able to pick up right where you left off and can spend an entire night telling stories and laughing.  Bruce made snow crab and Janna made Red Lobster's biscuits and dinner was delightful.  Sitting on their patio with a 180 degree view of the river, the bluffs on the Wisconsin side, and the new bridge was relaxing and enjoyable.  Janna and I started yawning and we realized that it was 11:00 and we had just spent 6 hours out there.  What a nice time it was!

Sunday, August 6.  Dang, it was hard to get to sleep last night - the last time I looked at the clock it was 2:30.  So I had a quiet day of just hanging out.  That is, until Tom arrived and I introduced him to a game of Farkel before we went to Red Cow where we met up with Ben and the family so they could meet him.  We had a nice dinner and conversation, although it was a short visit - dependent on the patience and behavior of the little ones.

Back at my place, we went through maps and brochures to come up with a plan for a road trip to see Lake Superior and maybe to the Lake Itaska, the headwaters of the Mississippi.  We decided to leave tomorrow morning, so he headed back to Faribault and I proceeded to gather up what I would need for the trip.

Posted by Bridge Coast to Coast Saga at 6:59 PM