Wednesday, October 18.  Monday was our day to get propane, fuel up the cars, take a trip to the Capulin Volcano National Monument, and go to the Colfax Tavern at Cold Beer, NM. 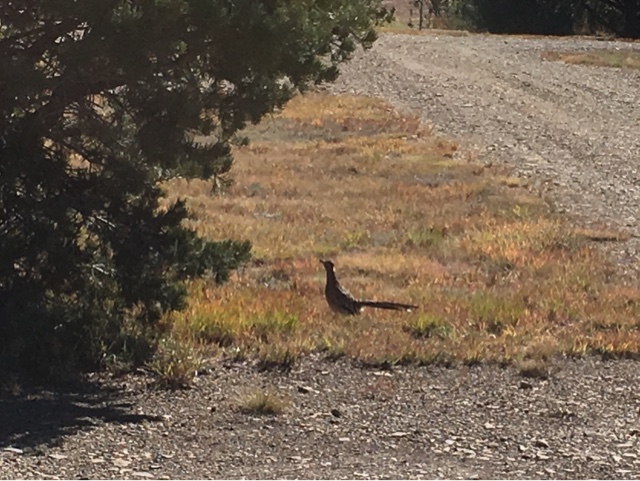 I spotted this guy as we were leaving the campsite.

The Capulin Volcano is about twenty miles east of Raton and was it cool!  We took the mile-long drive to the summit of the volcano, then hiked around the rim.  The views from up there were incredible! 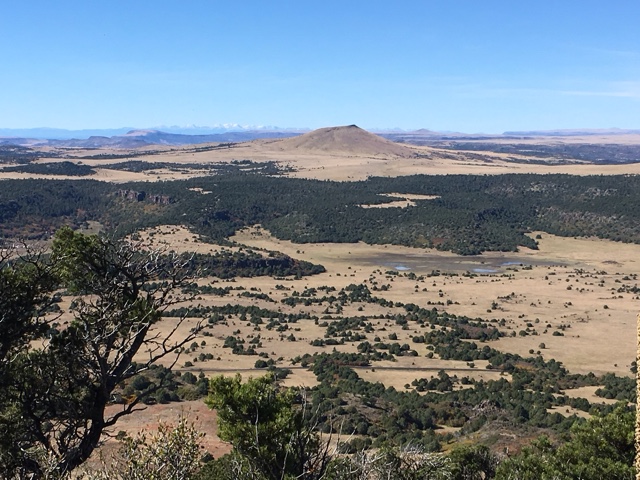 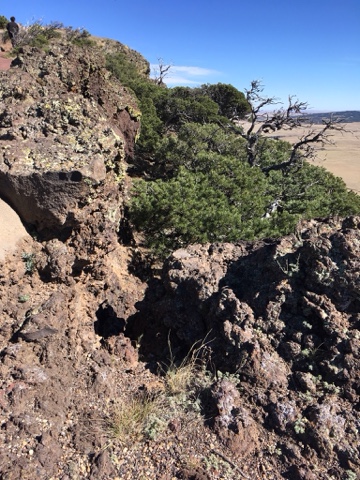 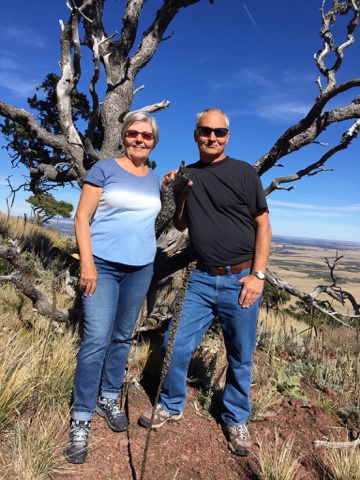 The Capulin Volcano began well over a million years ago, but its human history has been much more recent. Capulin has traditionally been a crossroads of human activity as diverse people and cultures traversed to and from the Great Plains. There is archaeological evidence that Paleoindians roamed this area in search of Pleistocene Bison as early as ten thousand years ago. Also, groups of Native Americans, such as the Jicarilla Apache and the Ute, used this region as hunting grounds until the arrival of the Spanish in 1541. Early explorers, in search of riches and regions to conquer paved the way for a greater influx of Europeans over the next 350 years.  In September 1821, William Becknell of Missouri blazed the Santa Fe Trail which was followed by countless others in search of profit. 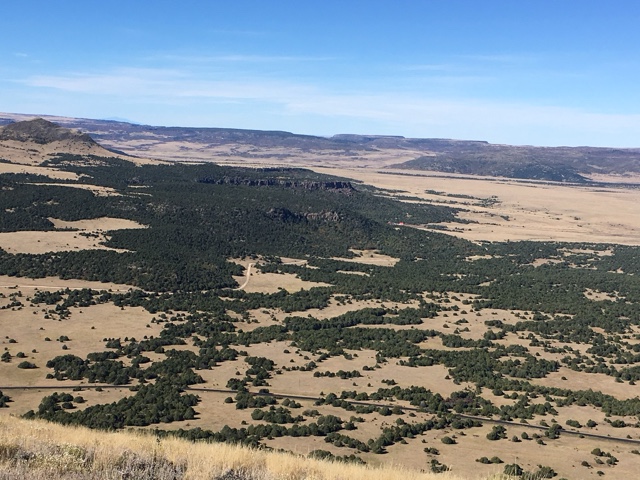 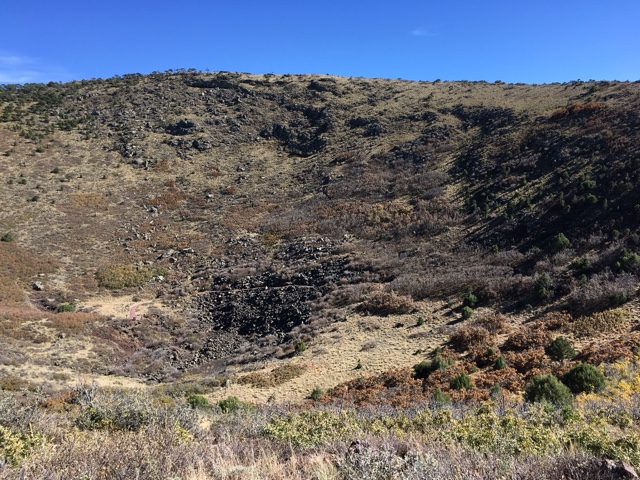 The base of the volcano.

When we checked into the campground, the Colfax Tavern was highly recommended, so we headed there after touring the volcano, it is out in the middle of nowhere between Raton and Cimarron.  The sign on the back of the bar said, "not much happens here, but when it does, you wanna be here".  We talked with a friendly couple, had a beer and a good burger before heading back to our campsites - a few deer freaked me out along the edge of the road on the way back.

This place is so nice that we decided to add another day - to hang out and see more of the area.  So, on Tuesday, we stopped at a statue commemorating Charlton Heston (the head of the NRA for many years) and marking the place where the Santa Fe

Trail crosses through the property.  As we were there, a friendly gentleman in a pickup truck stopped by and offered to take a photo of us and told us a bit of the history of the area. 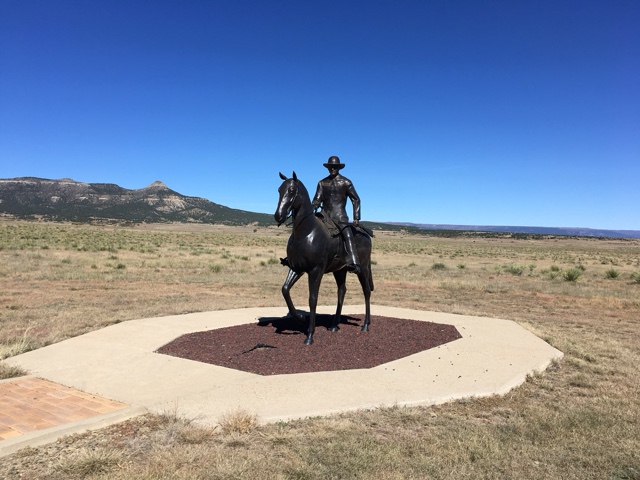 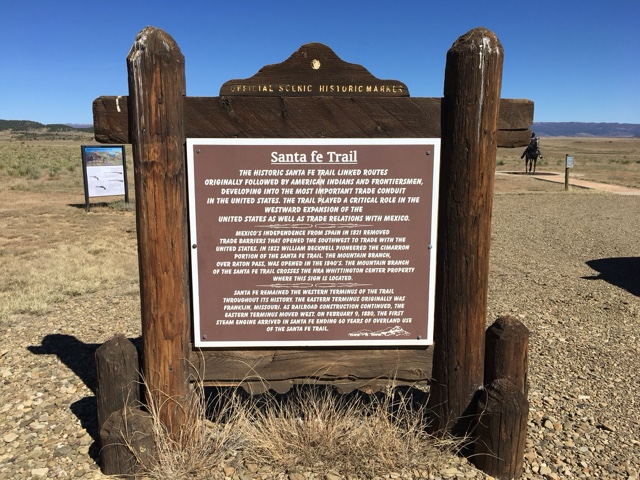 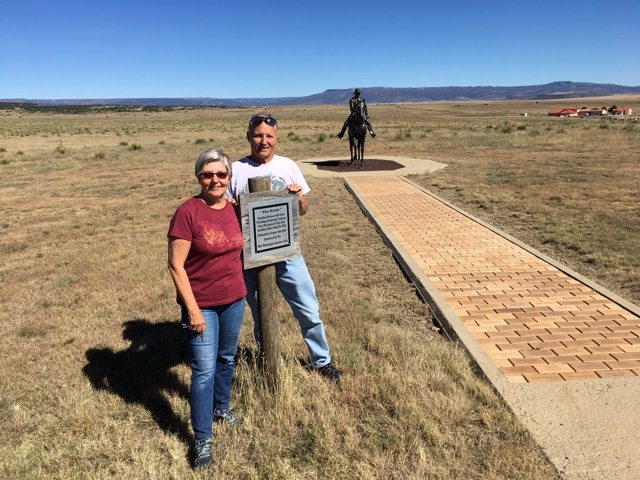 The museum had a very nice collection of guns throughout our history.  I was fascinated by the story and exhibit of Ben Lilly, the last mountain man in the southwest.  He was known to fight off bear and cougar with a knife (the Lilly knife, made by himself).  While we were there, Tom bought some ammo and targets, and after seeing the museum, we headed out to the range and shot a few rounds, something I have not done for many, many years.  One of us got a bullseye but we didn't check in between shots - I like to think it was me, although I only got one other hit on the target. 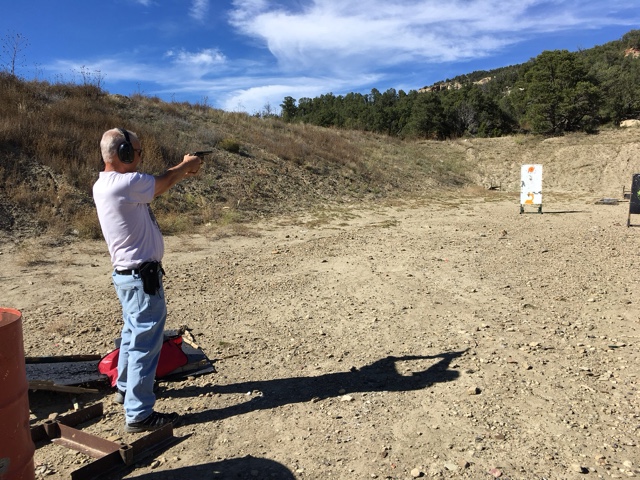 Today, we headed out for a very scenic drive to Albuquerque, through the Cimmaron Canyon to Taos, then along the Rio Grande River toward Santa Fe and then got settled for the next two nights at one of my member parks, Hidden Valley Resort, east of Albuquerque.

Thursday, October 19.  Today was the day to visit the Georgia O'Keefe Museum in Santa Fe, an item that has been on my bucket list for a long time.  It seems that every time I go through here, I am heading to somewhere and don't ever stop. I'm happy that Tom was interested in seeing it and that we had the time to go there.  Originally, the plan was to stay closer to Santa Fe, but the prices were high and availability near there was low.

The museum exhibits were a chronological history of her life and career as an artist.  My takeaway was that she was a strong, independent, and talented woman and that art was part of her life from back in her youth.  In many periods of her life, she painted the same object at different times and under different lighting conditions, they all looked different. 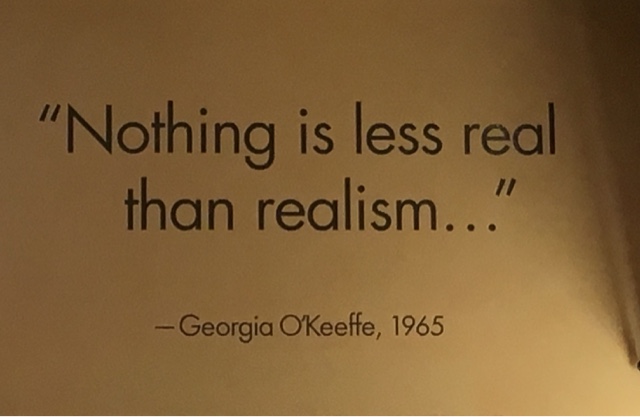 After seeing the museum, we both decided we want to go visit Ghost Ranch some day, it's another hour to the north and would be a bit much for this trip.

We walked to the Plaza and looked at all of the Native American jewelry and trinkets.  I was hoping to see the woman, Rose, whom I purchased a pair of earrings from back in about 1995.  At one time, several years after that, I lost one of those earrings.  I still had her business card, so I wrote and sent the remaining earring back to her, asking if she could make a replacement.  A couple of months later, I received a tp roll in the mail, complete with 2 earrings and a note - thanking me for my business and no charge.  Unfortunately, I didn't see her there, after all, that was close to 30 years ago - time flies!

The route back to Hidden Valley RV was along the Turquoise Trail National Scenic Byway, a 50-mile route through the Sandia Mountains and the small towns of Cerrillos and Madrid (pronounced MAD-rid).  We stopped at the Mine Shaft Tavern for a beer and a bite to eat. I had a salad with roasted red peppers and onions, green chiles, feta cheese, and topped with the local version of Kobe Beef - it was Delicious!

Friday, October 20.  Hookup and move on day, with a destination of the USA RV Park in

Gallup, NM - a very clean and neat park where we will stay and explore for the next couple of days.  After doing some laundry, we went to the office where they were selling pulled pork sandwiches and a bag of chips for $5.00 - they turned out to be very generous portions and quite tasty too.

Sunday, October 22.  Yesterday, we went for a drive on Historic Route 66 toward Grants and checked out Red Rock Park and Campground that was right in town near the convention center, about 4.5 miles east of Gallup.  It was a nice park, kind of dusty, with several RV sites and facilities.

We had considered a stop at Blue Water Lake State Park but at the last minute decided not to chance it because sites were available on a walk-in basis only, and there were only 2 full hookup sites and 8 water/electric sites.  Also, when Tom called yesterday, he was told that the dump station may not be available as they were having some water issues.  Still, we wanted to see what it was like and it is very pretty.  It was quite remote - 6 miles if you took the east entrance and 12 miles from the west entrance.  On the west side of the lake, there were rutted dirt roads and very primitive campsites.  The boat landing hasn't been used in years because the water was so low -he shore was probably 50 yards from where it should have been.

Back at our campsites, we sat at the picnic table and had a beer, then made chili cheese dogs for dinner.  It was predicted to go down to 21 degrees overnight, so we disconnected our water hoses, but then it only got down to 29 degrees.

Today was the day to clean, empty tanks, and organize to get ready for putting the trailers in storage.  It was a beautiful day for it.  Tom wanted to go into town to fill his truck up with gas, so I rode along and we stopped for a piece of apple pie at Cracker Barrel. It was tasty, but a bit under baked.

Another change in plans, we will only go as far as Overgaard tomorrow rather than drive the entire way back to Mesa - probably a 6-7 hour trek.

Posted by Bridge Coast to Coast Saga at 6:49 PM