Friday, November 17.  Here it is, another Friday and I haven't written a thing in my journal.  It has been a busy week.

Monday - I cleaned for Karen and was wiped out when I got back home, so took a nice nap.  Tom and I went to Zur Kate German restaurant for a nice dinner. The special was roast pork and it was so tender and flavorful - served with German potato salad and red cabbage.  We will definitely go back there.  There are actually 2 German restaurants in the same little strip mall at Main and Higley and we walked into the Bavarian Inn first, just to check it out because of some negative reviews that I had read.  The reviews were right - mostly of a bad odor - and we walked in and right back out again.  The right choice was made, our dinner and experience was very nice.

Tuesday - I cleaned for Jim and Shirley and spent the rest of the day around home.  Arlene had to go to the hospital on Monday night due to some intestinal problems, so she and Sharla gave us their tickets to see "Kiss and Tell" at the Hale Theater.

From the Hale website:  "Hugh Herbert’s 1940’s riotous romp entangles a family feud, a secret marriage, and a madcap dose of mistaken identity! Two teenage girls, Corliss Archer and Mildred Pringle, cause their respective parents much concern when they start to become interested in boys. The parent’s bickering about which girl is the worse influence causes more problems than it solves after both girls sell kisses for charity at the USO bazaar. It’s a “fresh, funny, and completely beguiling comedy about a small town Junior Miss."

Connie joined us for the great comedy production.  It was lively and full of laughs.  They do such a nice job on their shows. 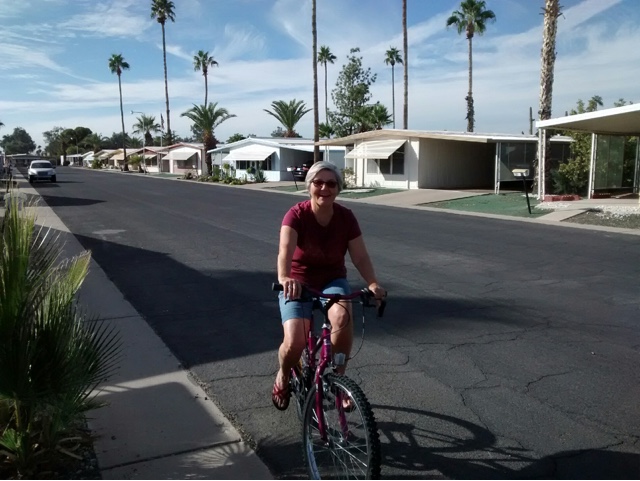 Wednesday - no work this morning, so I slept in - until 9:00 when my phone was ringing.  It was Rita with an update on Rick's condition, but actually there was no update because he refused to go for his scheduled PET scan that would show where the cancer is in his body.  He was stubborn and obnoxious when Randy got there to pick him  and he refused to go.  Later that day, he ended up calling 911 and Randy spent 3 hours with him at the hospital and again, he got irritated and took a cab home.  This is not going to have a good outcome, I just have a bad feeling about it.

We met up with some friends at the pool in the afternoon for a happy hour.  Another good time of sipping and yakking.

Thursday - we took off at 9:00 with a list of RV parks to explore at Casa Grande, about 50 miles to the south of here.  Of the eleven parks that we stopped at, there were 3 that we both liked and would consider for a long-term winter stay in the future.  There are a few others in the Apache Junction area that we learned about and would like to see.

As we were heading back to Mesa, we got an email from our HCC President notifying us that the board meeting scheduled for 5:00 this afternoon has been pushed back to 4:00.  We were both a bit irritated by this, so I tested back that I wasn't sure if we would be back in town on time.  We did make it on time and even stopped at Waldo's BBQ for some take out pulled pork and brisket for dinner.

Today - we both had appointments this morning at 10:30, so we headed our separate ways.  Tom picked up his trailer that was in the shop for new brakes and I was off to get a haircut.  After my appointment, I went to Turnstyle and found some good bargains and then to Trader Joe's for a few things.

Tonight, we picked Pat and Roger up and went to The Dog Run in AJ for fish fry - and a very good one it was.

Sunday, November 19.  Today was the day to meet some of Tom's friends.  We met Manuel and Linda at the Hen House for breakfast this morning.  They are a nice couple who met up with Tom on his travels out east this past summer and have been long-time friends and co-workers.  It was a nice time.

I had a nice FaceTime conversation with Charlotte this afternoon, as she was down and out, not feeling well, and snuggling on the couch.

This evening, we were off to Duane and Debbi's new house in Queen Creek.  Again, a very nice couple, long-time friends of Tom and his ex-wife Kathy.  Their house is beautiful - complete with an RV garage where Duane is rebuilding/restoring a 1963 Corvette.  We had a drink on the patio before having a very nice steak dinner, then visiting until time to go home.

Saturday's hope highlight was the Homecoming Dinner and dance at the clubhouse.  Ninety people signed up and attended dinner but the crowd thinned a bit after that.  Rick Jones provided the entertainment, an excellent singer and guitar player backed by music on his iPad.  It was a fun night of dancing and socializing.

The news coming from Springfield regarding Rick, is not pleasant.  They have found several spots of cancer on his lung, taken an MRI of his brain, a CT scan and surgical biopsies, but no results have been passed on to Randy yet.  I don't have a good feeling about this at all.

Posted by Bridge Coast to Coast Saga at 10:03 AM