I realized this week that I haven't written anything on this blog since Thanksgiving.  There really hasn't been a lot to write about until this week.

Back on December 1, Patty and I joined Monica, Nan, Lindsey, and her girlfriends at her annually Christmas ornament exchange of some lively conversation, laughs, and yummy food.  She lives an hour away, so I resisted having more than one glass of Sangria and we left by 10:00.  It was a great time! 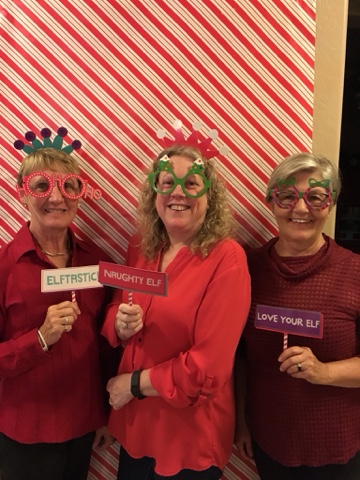 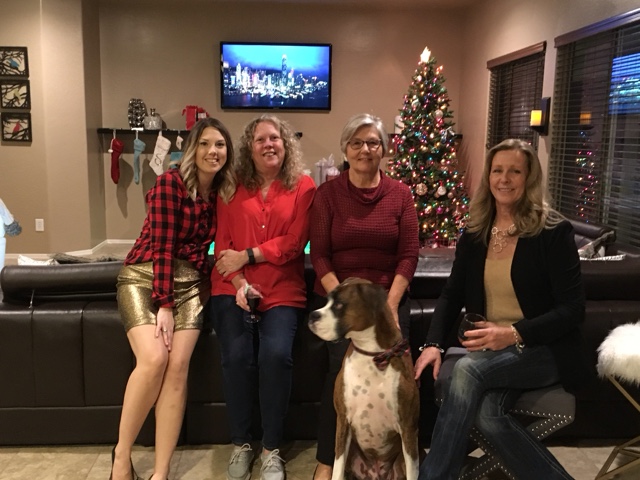 Tom and I joined Pat and Roger for a happy hour one afternoon. 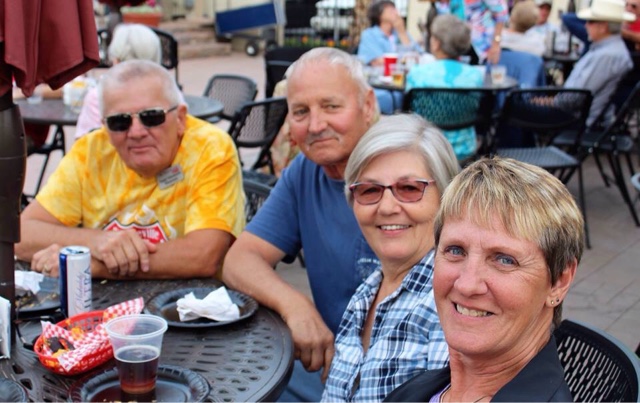 The four of us hiked the trail along the Salt River at Blue Point last Friday since the temps had dropped and it was cool enough for a hike. This is one of my favorites, although it is only about a half-mile long.  We still were up for more hiking when we finished, so we went down to the Butcher Jones trailhead and walks along the river some.  A lovely hike it was. 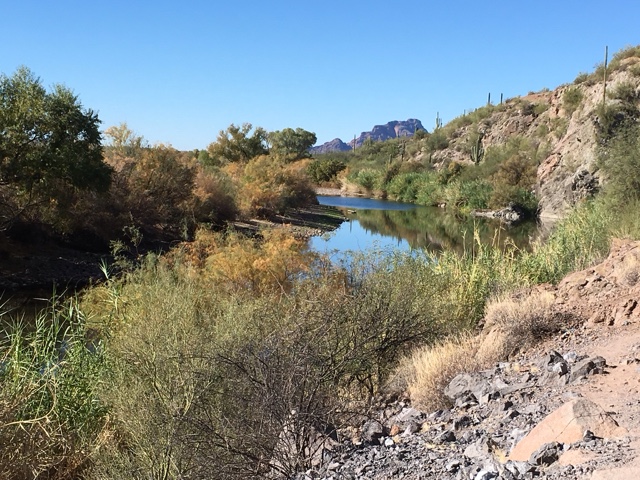 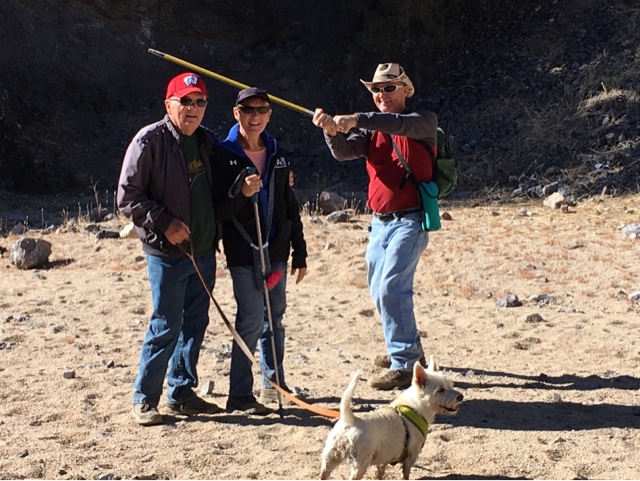 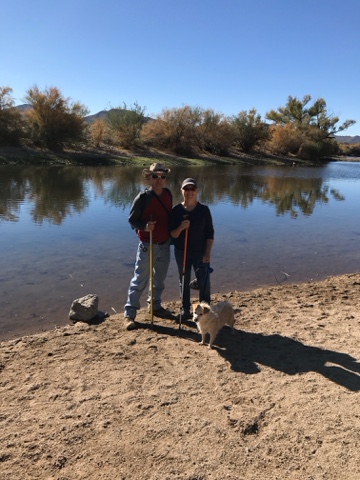 Thursday, December 14. This week, we have reservations at Patagonia Lake State Park for a few days and we met Pat and Roger there on Wednesday afternoon.  This is beautiful country that I have not been to before.  We're told that the place is really hopping during the summer (one of the few lakes in the area), but at this time of the year it's pretty sparse.

We provided breakfast of broccoli quiche and fruit salad this morning and then went hiking on the birding trail along the Sonoita Creek - a very popular birding destination. 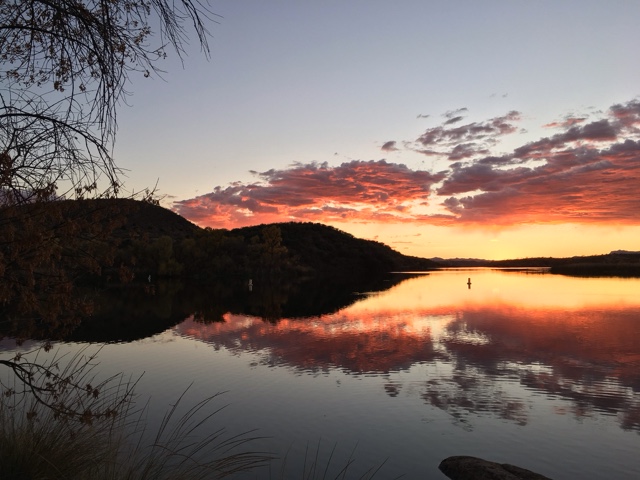 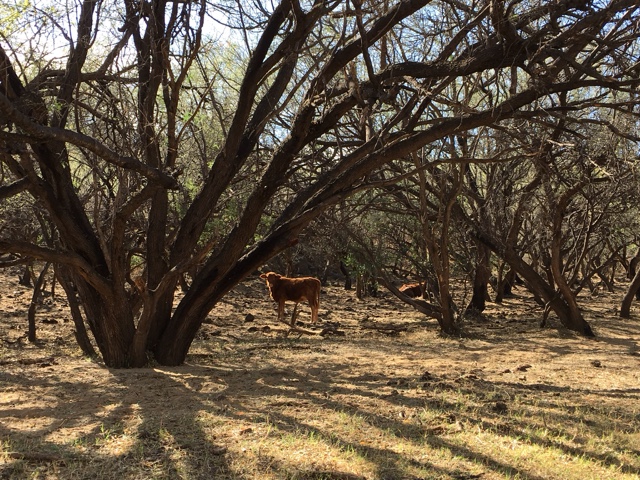 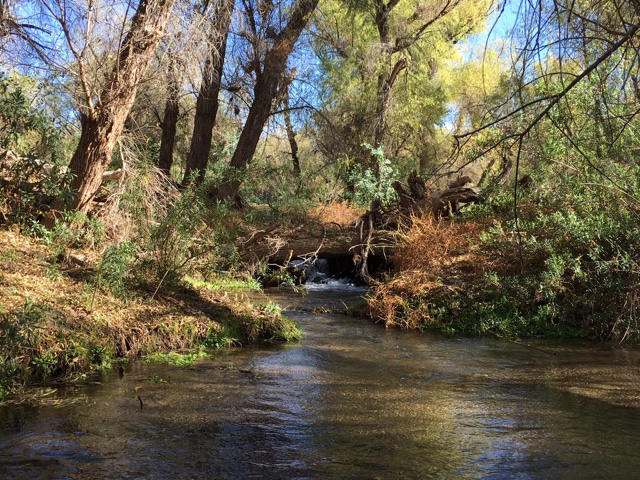 Friday, December 15.  Pat and Rog took off this morning and Tom, Frisco, and I headed to the Sonoita Creek State Natural Area after getting a permit at the Visitors Center at the campground.  We started at the Sonoita Creek Trail, connected to the Cottonwood Loop Trail at the trail crossing, and finally the Black Hawk Trail that took us back to the western edge of Patagonia Lake and the spillway that went back to the parking lot.  The first part of the trail was quite narrow and pretty rocky but very doable.  The hillsides were dotted with Mesquite Forest and many grazing cattle.  At one point, there were several standing right on the trail, staring at us.  We had to make some noise to get them to move out of the way - they were quite docile and it seemed like they were quite comfortable sharing their space with us. 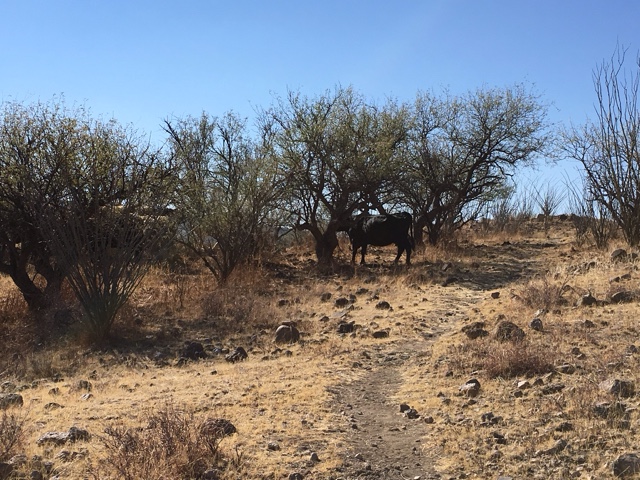 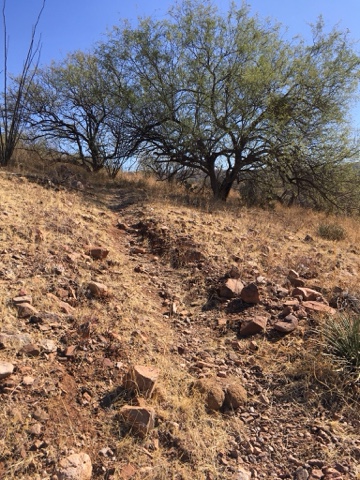 When we got to the Cottonwood Trail, we walked along what was formerly a train track for the New Mexico/Arizona Railroad line that once went right through the center of the lake.  Torrential rains during monsoon season destroyed the railhead and it later was dammed to form the lake and the state park.  The trail at this point followed the creek and was shaded by many huge Cottonwood trees.

The trail crossed the creek and we were hiking along the north side - to the south were huge rocky hills that formed a pretty steep canyon.  There was very little water in the creek.  Frisco was starting to get slow and tired during the last half-mile of the hike and I carried him for part of the way.  He has never been carried before, fought it for a little bit but then settled right in and enjoyed the ride.  By then we were back at the spillway that led us back to the parking lot.  Along the spillway were 30 some cattle lying down and enjoying the sunny afternoon.  The hike was a little over 3 miles.  We all took a nap when we got back to the trailer. 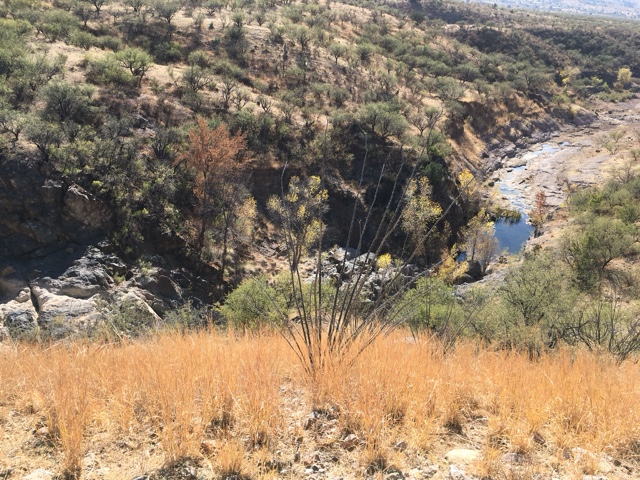 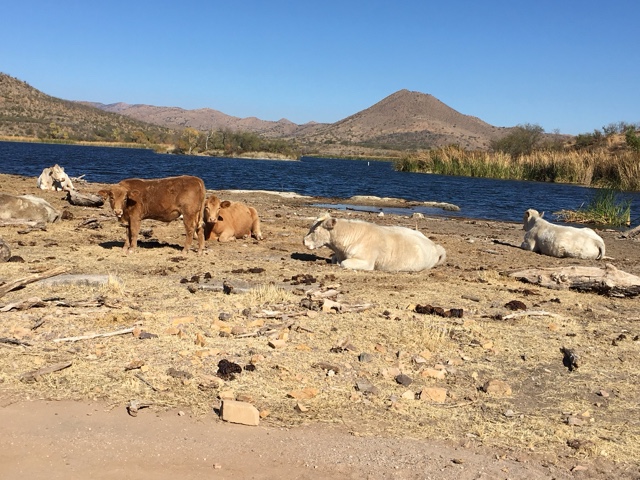 It's gotten cold, so we didn't even have a fire this afternoon.  Instead, we stayed in and watched "The Ranch" on Netflix.

Saturday, December 16.  After a walk with Frisco this morning, Tom and I headed to Patagonia for breakfast.  It's a tiny little town and the drive-through took us about 5 minutes to see the whole town.  We went to the Wild Horse Restaurant that is part of the historic Stage Stop Inn and had a very nice breakfast, then browsed through a couple of art galleries/gift shops.

This evening, we took an hour long twilight tour of the lake on a pontoon boat.  Gilbert was our tour guide and he really knew a lot about the area and pointed out some very interesting areas.  We pulled into Long Cove and he pointed out the plants growing on the south shore with the hillside facing north were different than the desert plants that grew in the south-facing hillside on the north shore.  It was very quiet and serene in there.  The most interesting birds that were spotted were Cormorants, Great Blue Herons, and Night Herons.

The tour lasted about an hour and then we docked in time to watch the sunset.  It was well worth the $5.00 admission.  Entertaining, educational, and relaxing. 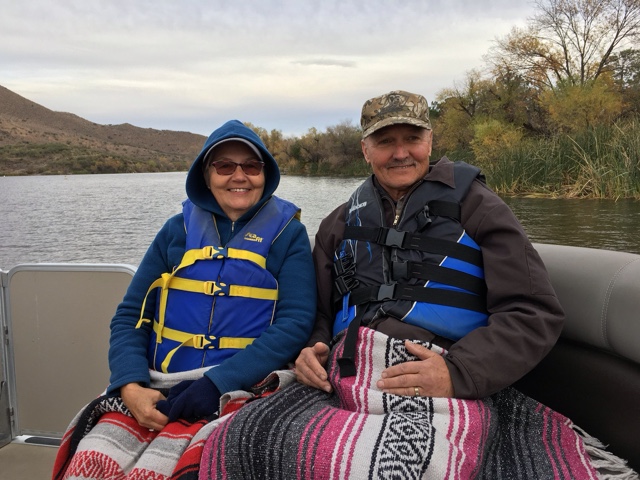 Posted by Bridge Coast to Coast Saga at 2:14 PM