Wednesday, March 7, 2018.  We kept the trailer parked in front of the house and plugged in, unloaded only laundry and some of the food.  I had 2 cleaning jobs this week and we spent the afternoons getting ready for the next trip to Yuma.  So, this morning we were on our way after selecting a different RV park because the Escapees KOFA Koop didn't work out. They don't take reservations, sites are only available to members, are available on a first-come basis, and it is the place we really wanted to stay at. Unfortunately, we learned there were no sites available when we called this morning and had to make alternative arrangements.

I had an opportunity to do the driving between Buckeye and a Rest Area about 80 miles east of Yuma.  I was sure that I could handle it and all went well, but I wasn't in heavy traffic or having to change lanes and I certainly wouldn't feel comfortable backing it into a site.  Once Tom took the wheel again, I called the Escapees park and learned that they did have a site available, so are settled in site 56 at a members rate of $20 a day. The site is wide and long, bordered by a 2' brick wall, has plenty  of room for the camper, a generous concrete patio and a place to park the truck, and a shed for the owner's personal items.  These are leased lots and when the occupants are away, they allow them to be rented.  We are backed up to open desert and there is a very large fenced Dog run. 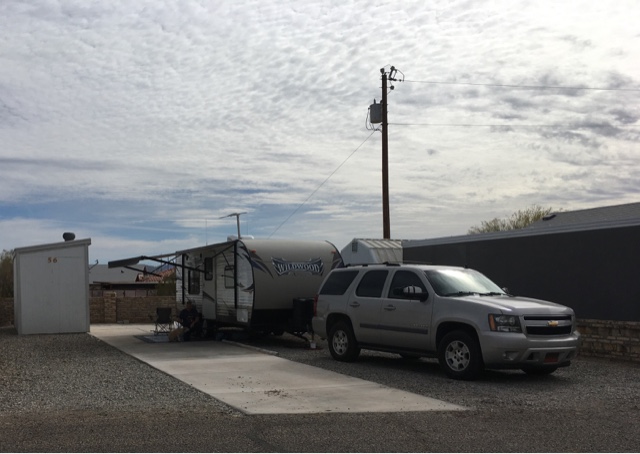 Shortly after setting up, JoAnn came by to welcome us, gave us several brochures with regional information, a goody bag for Frisco, and a handmade jar opener and 2 coasters with a retro RV design.  We are impressed!  Well, not so impressed with the cable TV, antenna reception, or radio signal.  I'm good with that but it bugs the hell out of Tom. I'm fine as long as I have phone data or my hotspot is working.

Thursday, March 8.  Our first stop today was the Yuma Visitor Center and the Yuma Quartermaster Depot.  The following info is taken from their website:  "It is located on high ground above the Colorado River, the U.S. Army's warehouses held a six-month supply of clothing, food, ammunition and other goods for forts in Arizona, Nevada, Utah, New Mexico and Texas - and were surrounded by as many as 900 mules and their teamsters.

Ocean vessels brought goods to the Gulf of California, from San Francisco where they were loaded onto steamboats for the trip upriver to Yuma. Supplies were shipped farther upriver or overland in wagons pulled by the 20-mule teams of Western lore.

With the coming of the railroad in 1877, the Depot's supply role faded and the Army closed it in 1883. But the site lived on as a telegraph and weather station and customs office - and then as the first home of the Bureau of Reclamation (U.S. Reclamation Service) and the Yuma County Water Users Association. Engineering pioneers worked from here to tame the river, building dams to prevent floods, generate power and ensure a source of water."

It was very interesting and we learned a lot and before we left, we stopped at the Back in Time Pie shop for a yummy piece of bumble berry pie with a dollop of ice cream on top.

From there, we went to the Yuma Territorial Prison State Historic Site and got a feeling for what it was like to be in one of the worst prisons in the US, rated right up there with Alcatraz.  Most of the buildings have been reconstructed after years of decay, exposure to the harsh weather conditions, and abandonment. 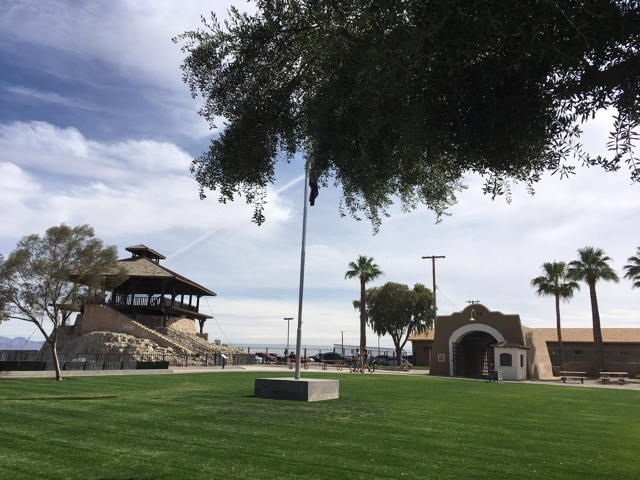 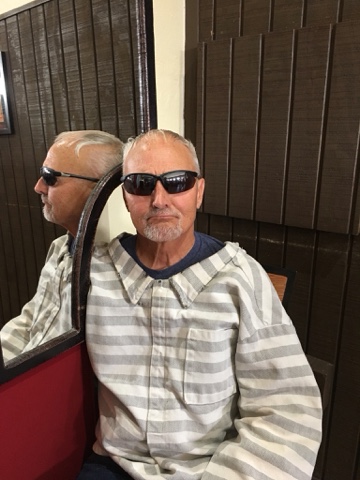 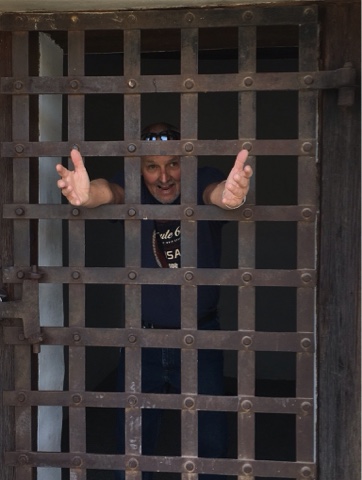 Friday, March 9.  It was another day of touring and exploring and our first stop was the town of Felicity, CA whose claim to fame is that it is the Museum of History in Granite and the Center of the World.  It is a strange place but has a very heartwarming feel about it.  You can read more on their website at http://www.felicity.us/home.html. We were taken into the pyramid and stood on the dot that marks the center of the world, made a wish, and were given a certificate stating that we had been there. In the future we can enter for a $3 donation.

While we were there, we walked and viewed several of the memorials (triangular shaped walls engraved with stories and pictures that tell about events and people in world history). We then climbed the 49 steps that led to the Church on the hill where we had a beautiful view of the entire place, including a new exhibit that is a concrete walled maze that will, one day, be covered with plaques that tell the story of individuals. Anyone can pay $100 and send in a photo or story, and you will be recorded as part of history for as long as the memorial stands. 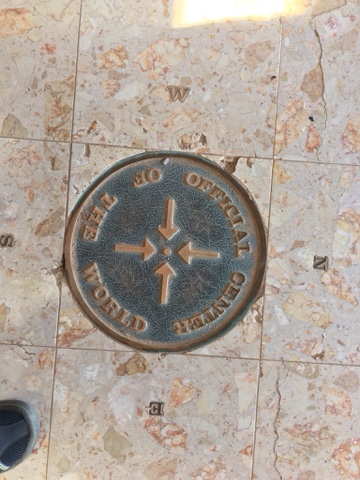 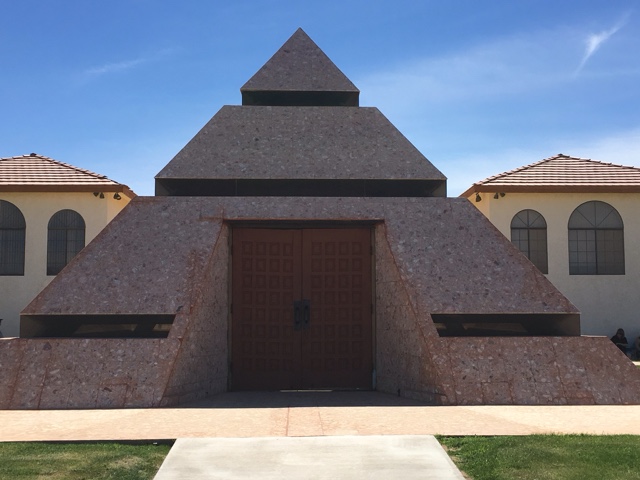 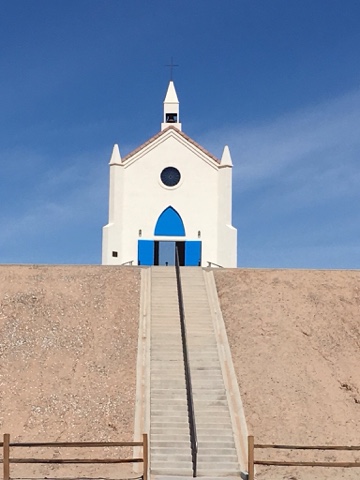 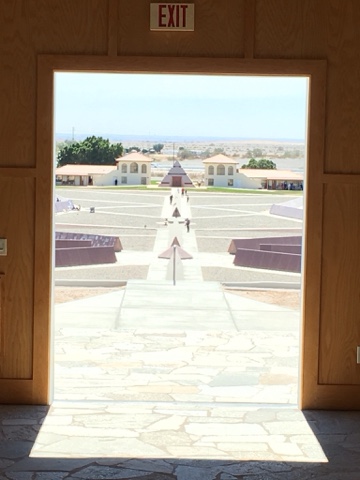 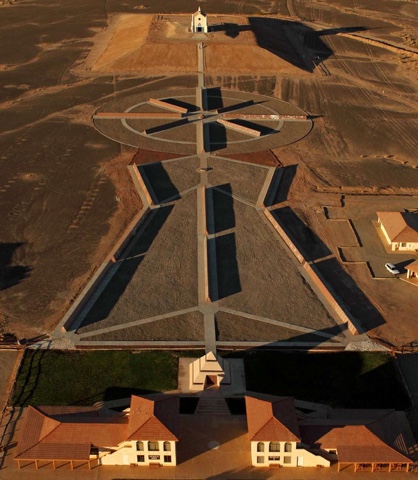 Before we left, we stopped in the gift shop and bought the children's book, "Coe, The Good Dragon at the Center of the World", the story that is the basis for the place.

We then headed south on CA 186 to the parking lot on the border at Los Algodones, Mexico.  We stopped in and got an estimate of some of the dental work that we both could us - an implant is $800, then 4 months later, the crown is added for $350 - not bad considering that Tom was recently quoted about $3,500 in Mesa.

We also stopped for some lunch and a beverage in a Cantina, then did some shopping.  Tom bought a belt and Kahlua and I bought Vanilla, antibiotics, tortillas and some Tequila.

Sunday, March 11.  Yesterday was a 'do nothing' day and we never even left the park.  We thought we might go to the pool but didn't even make it that far.  We also thought we might join the neighbors for happy hour but the chairs never came out and the OPEN sign never came on - these are serious happy hour folks that usually draw a good sized group most afternoons. Bill told me that you had to be prepared to tell tall tales if you joined them.

Today, we went to Gateway Park and walked the trail along the Colorado River and a canal. It was a nice day and a walk felt really good. 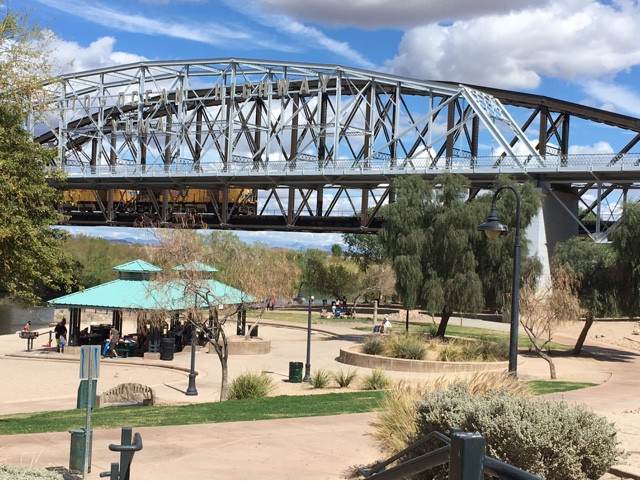 The chairs came out across the street and we joined a few folks for Happy Hour. Most of the people in this park are getting ready to leave for the season. In fact, the park is closed, starting on April 1, to everyone but those few who remain through the summer.  We didn't stay long because there is an ice cream social at 6:00 and we had to fit in some dinner before then.

We got a free scoop of ice cream because we were newcomers and got to be first in line.  Stan and Beth joined us at our table, telling us that one of their park rules was to never let newbies sit alone. They are nice folks from Canada who are world travelers and had interesting stories to tell.

Posted by Bridge Coast to Coast Saga at 9:59 AM