Sunday, November 4.  Thursday was anothet early day, starting with coffee and doughnuts at the clubhouse at 8:00 am - a weekly activity to keep everyone informed of the news of the park.  After that, we did laundry, opting for a nearby laundromat rather than the park laundry - multiple back and forth trips between our site and the laundry, versus getting everything done at once and costing less.  The laundromat is spotlessly clean and has multiple options for both washing and drying - all very efficient. We were out of there in an hour and even did some browsing at the St. Vincent de Paul store next door.

On Friday, we both went in different directions to run errands, me for some shopping and a touchup on my recent haircut and Tom to see his chiropractor.  While shopping at Beall's Outlet, I found a very expensive $168 swimsuit on the rack for $30 - and it fit well and felt real comfortable.  A bargain, for sure.

We met Pat and Roger at Tom's BBQ for dinner and we all had their tasty fish fry - ample portions and some of the best fish fry in the area. The manager stopped by to say hello and told us that he goes through 80 cases of fish on Fridays, compared to 10 or 20 on all of the other days of the week combined.  It was great to see them again. After dinner, we followed them back to their motorhome at Val Vista Village for a nightcap and more good conversation.

We slept in on Saturday morning - the first time in days and it sure felt good!  After breakfast,Tom helped his son move some things and I went to an estate sale and a few garage sales.  When I got back home, there wasn't much to do, so I washed down 3 sides of the trailer. It is pretty grubby from weeks on the road.

I learned that my cousin, Larry Ganshert passed away this morning, another one who lost the battle with cancer.  The poor guy had been through 5 cancers over the last several years and his odds of getting through this one were good too.  Unfortunately, he had a very strong reaction to his first chemotherapy treatment and his body couldn't fight it off, even after 2 weeks in ICU. He was admitted to hospice about a week ago.

Larry and I grew up together and we spent a lot of time together.  As cousins, we were best of friends. We even got married to each other in a pretend wedding when we were kids. Mike and I went to his graduation from the Navy boot camp at San Diego.  Later in years when our kids were older, we would go out for dinner with him and Sue. He was one of those really nice guys who never hurt a soul in his life. He would go out of his way to help a friend, family, or neighbor.  He stood by his family no matter what.  He will be missed by many.

Thank you to our friends and family that have reached out to us these past few days. I never imagined all of your kind words and remembrances would comfort us the way that they have. Many of you have been asking for details. We tentatively are planning on Saturday  November 10th at Christ Lutheran Church, with visitation from 10-11 and service at 11. Confirmation of the funeral will be posted in Wednesdays obituary. The following is the most important information that we pass on.

Dad loved dessert and usually ordered it first. At hospice he only ordered the dessert of the day and maybe some fruit. Funerals were hard for Dad. He told us his request for his day, but if you knew my Dad, they were clearly rules to be followed.

1 picture. Funeral Pictures are sad, and sometimes the memories are overwelming.

2 songs must be played at the visitation (What a wonderful world and Running on empty), you pick the rest, but dont make em all sad. Play the songs that remind you of me.

Be comfortable, wear your Best blue Jean's and polish your boots.,

DONT make it all sad. This is hard enough.

And then he said, are you going to have a luncheon? & we asked if he wanted us to, he shrugged his shoulders and said up to you.  His evening tray came in & it was just dessert.  I said, how about a luncheon, with just dessert. and he chuckled and said, "yes. Add it to the list."

Due to flower allergies, and Dads giving personality, we request that in leiu of flowers you bring  a "Dory Bear" to his service. This is any teddy bear, new with tags, 10" or larger to be donated to Agrace. His Grandchildren each were given 1 to hold and cry into and remind them of their Papa. He would be honored to repay the favor of that comfort to other families.

Thank you again for all your love and support for the loss of one of the Greatest Men we have ever known.

When Tom got back home later in the afternoon, we had cocktails and dinner and nonstop talking until bedtime. Whew! What happened?

This morning, the alarm went off early again so we could meet up with Manuel and Linda for some 4-wheeling around Saguaro Lake.  We got to their house and Linda had a delicious biscuit and gravy breakfast ready for us.  They have 2 Jeep Cherokees, so Tom and I were in one and they in the other and we set out after breakfast, down Bush Highway to the Butcher Jones recreation area of the Tonto National Forest where we turned off onto the 4-wheel drive trail.

The roads were sandy, hilly, rocky, and meandered through the desert to a cove on the north side of Saguaro Lake where we stopped for a break. And then we meandered some more, heading off to another cove where we put out chairs and had a bite to eat.  On the way back, we encountered a few steep hills that we had to climb and almost got stuck a couple of times. Tom did a great job of getting us through.  The drive totaled 10.5 miles and we saw some beautiful scenery along the way. 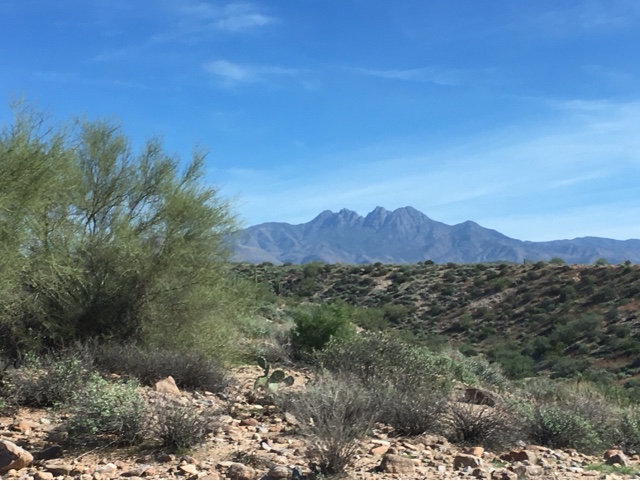 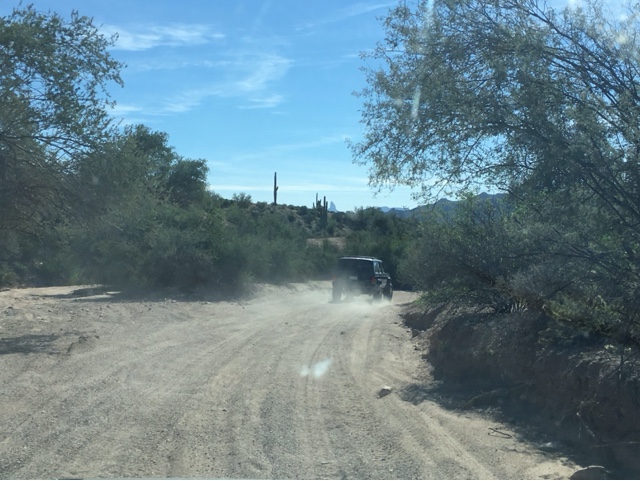 Manny and Linda leading the way. 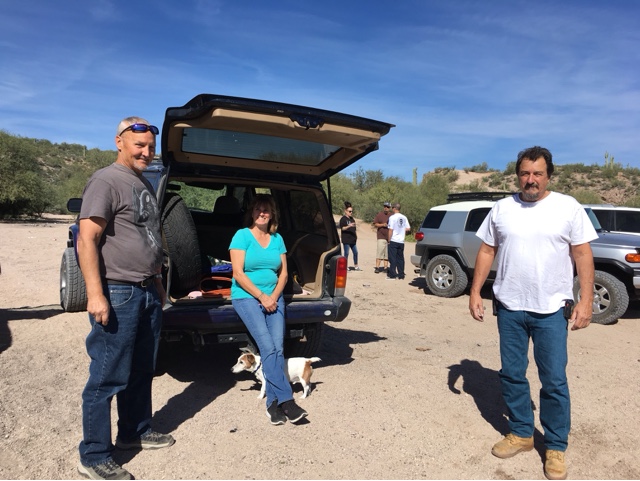 Our first stop on the shore of Saguaro Lake 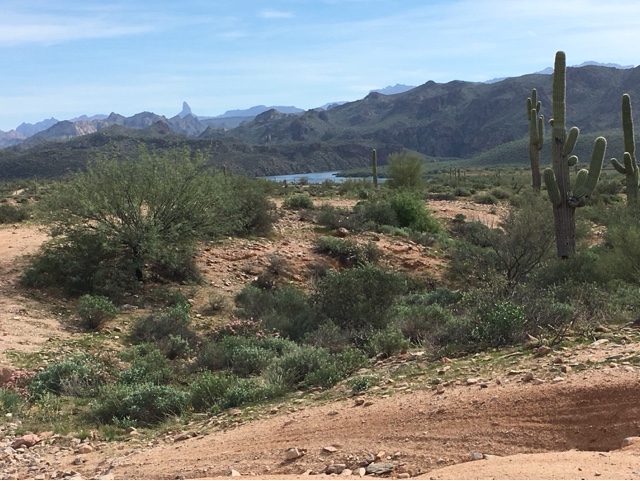 The peak in the background is Weaver's Needle 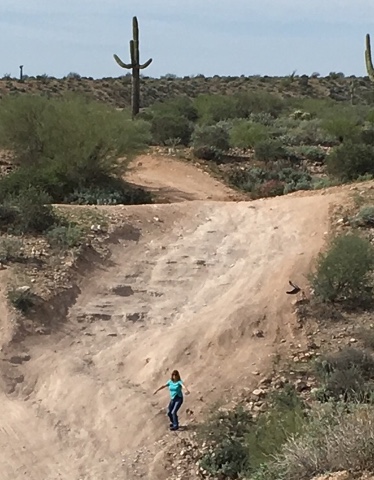 Linda is directing us on what path to take. The hill we came down was more rocky. 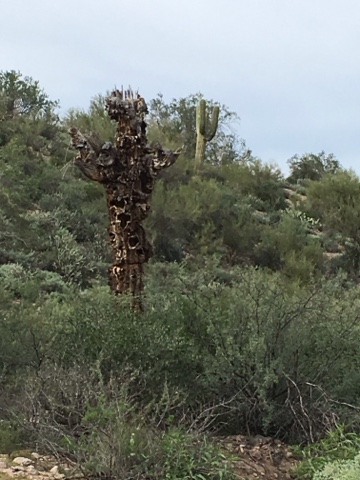 A gnarly old Saguaro.
Posted by Bridge Coast to Coast Saga at 5:06 PM