Thursday, November 29. I cleaned Karen's house on Monday morning and learned that it was my last day, as she is moving next week and her new place provides the cleaning service.  I will stop and check her house and clean on an 'as needed' basis before it sells. So my cleaning jobs have dwindled down to 3 and I will continue to have jobs on Tuesdays and every third Wednesday. I'm not sure about Carl, as I have heard that he will only be coming for 3 weeks in January and his daughter will probably handle the cleaning. We shall see.

I went for a drive through the Tonto National Forest yesterday along the river, pulling into several parking lots in hopes of catching a glimpse of some of the wild horses.  I got lucky when I spotted a band of 5 next to the parking lot at Blue Point, one of them was a  young one asleep on the ground and the others standing guard around it.  Later on, I pulled into the Coon's Bluff recreation area and spotted another band that was meandering toward the river. 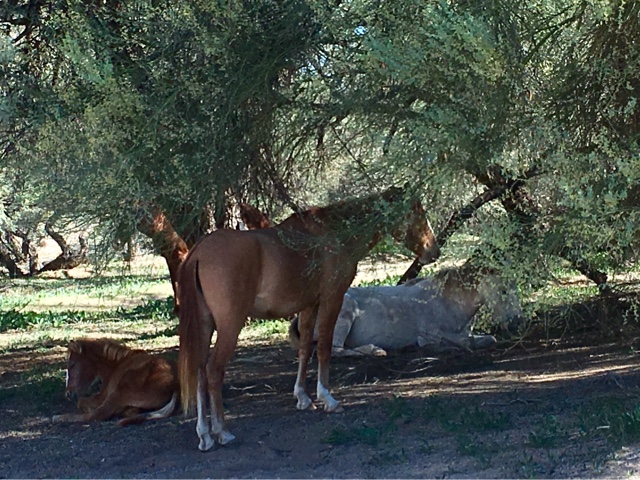 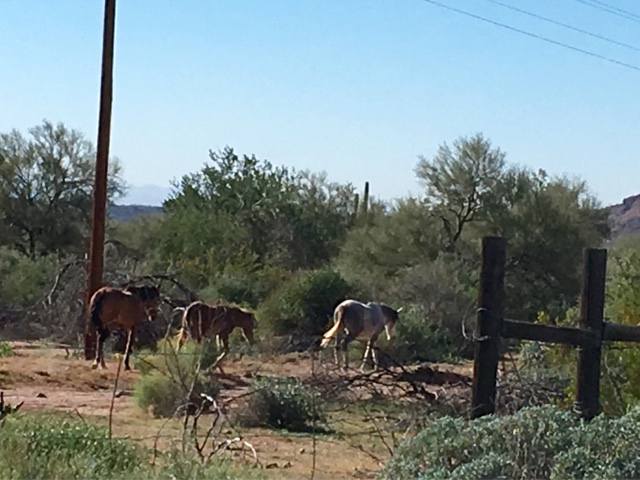 The views are spectacular and I never get tired of seeing them, especially Red Mountain. 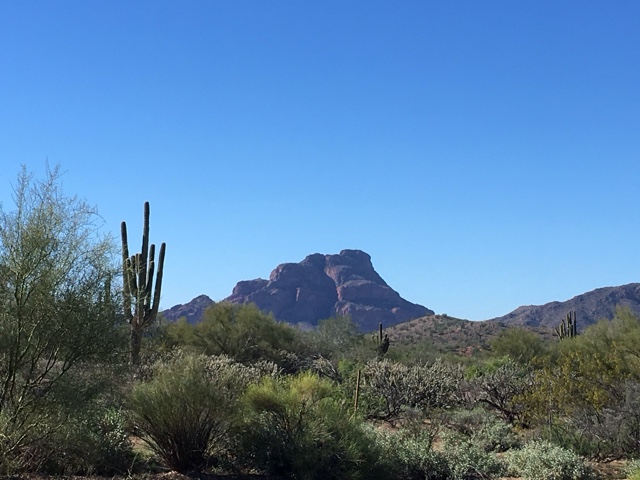 We took Arlene to Zur Kate's German Restaurant for dinner tonight. We hadn't gotten out of the gate when she said that she didn't have a house key and we would have to break the lock on her front door.  Dinner was very good, we all opted for the saurkraut special, chose various sides, good beer and shared an apple strudel for desert.   Of course, we had some nice conversation.

Back at Highlands, I pulled up to the gate, entered the code, and nothing happened. I tried 3 more times and it still didn't work. So when I saw a guy coming  up, I scurried through that gate and proceeded to Arlene's house.  Another car pulled up next to me and the lady checked if I (we) belonged there, asking why I pulled into the park the way I did, who lived there, and why Arlene didn't have her key.  She sped off, threatening to report it to the office tomorrow.

Arlene remembered that the lock on one of the bedroom windows was broken and she had just removed the screen, so Tom climbed in and came around to open the door.

Friday, November 30. I saw Dr. Roland Phillips today, Tom's long-time Holistic Chiropractor. For several months now, I have had aching in my left side - neck, shoulder, hip, and knee and just felt like it was time to take some kind of action. Doc's approach is definitely 'out there' but it all makes sense to take care of the whole thing - nerves, muscles, brain, so I plan to see if it helps over the next few months.

Posted by Bridge Coast to Coast Saga at 12:01 PM