It’s the last day of July and I was just reading about the black moon tonight - the second new moon of the month - although it doesn’t appear any different, it is a rare occasion.

I haven’t written since last week Thursday so I have some catching up to do.  I went to some garage sales on Friday morning and Tom and I had fish fry at the Villa in Albertville that night. Last year, I had a delicious and very large serving of grilled lemon crusted Walleye there and I was hoping for a similar experience. Not quite, this time. My serving was about half the size although it was quite good and my cocktail was weak and Tom’s cod was a bit on the greasy side.

Sunday was quite interesting. Those of you who know me well, know that I have been feeling unsettled lately and Tom and I have talked quite a bit about the differences in how the near future should be for us. His interest is to travel and visit areas that he hasn’t been before and I have been feeling the need to get settled here in Minnesota, reunite with my personal possessions, and ive been feeling tired of traveling for quite some time now. I have been researching apartments for months, actually years - ever since I first decided to sell my house and relocate to this area about three years ago. I found one this week that I am interested in, will be available soon, and fits my budget. So we drove around several complexes on Sunday before actually seeing the apartment that is available at River Crossing in St. Paul (my first choice). It is part of the same complex but in the building next to Graham Place, a senior facility that has been high on my list for the last two years.  After seeing the apartment, I made a deposit and locked myself in. A credit check and personal reference still need to be completed before I know for sure that it is mine and then I will prepare to move in on October 1. Tom will continue his RVing lifestyle when he heads back south after Labor Day and we will see about doing some trips together in the future.

This is going to be another huge adjustment in my life, but I am ready to face it just as I was two years ago before Tom and I started our relationship. Since our future goals are so different, we will see how things go from here. In the meantime, we will spend the month of August together here in Monticello and then set off on our own.

After seeing the apartment, we picked Charlotte up and she came home with us to spend the next three nights. Monday was kind of a cool day, so we walked to a nearby neighborhood park with a huge spiderweb for climbing on, then along the path to Otter Creek Park where she and Frisco checked out the creek. That evening at the playground here in the park, she met Mattie and the two of them hit it off and had lots of fun together - much more fun than us adults were. Although she sure has been enjoying Tom’s teasing sense of humor and playfulness.

We took Charlotte to the Space Alien Grill in Albertville, a place we thought she might like and had been considering checking out. She thought it was creepy - she loved the ceiling with the solar system but didn’t like the aliens that were on display - thought they were scary. She also did like the pizza, eating all but one slice of a 7” cheese pizza but didn’t like the Raspberry Iced Tea as it was too sweet, so she had my water and I had the tea (it was way too sweet). Another thing she liked was the Arcade and when we went to play games, their computer system was down and we had to nix that plan.

Monday night was rough for Frisco and I. He was having intestinal issues and I was up every half hour - eight times during the night - to let him out. I restricted his food throughout the next day and gave him a light dinner. He slept a lot during the day and I was wishing that I could. It was an early to bed night and we all slept well through the night. I wonder what’s going on with him? He went through a bout of this last spring.

Yesterday was much warmer so we went swimming at Bertram Lake Beach in the afternoon. Charlotte had some play time with Mattie in the morning and Tom and I enjoyed the short break. She hoped to play together again in the evening, but Mattie wasn’t home, so it was Grandma Rose and her at the playground and searching for goose feathers. We all played a card game of Memory and then went to bed and read.

Today, we went to visit the Oliver Kelley Farmstead in Elk River, a historic living history farm that was interactive. Farmers dressed in period clothing demonstrated how things were done in the 1860s. Charlotte got to lay on a straw bed, pump water, feed chickens, slice cucumbers, taste Swiss Chard from the garden, and pet several animals. She said she really enjoyed it. 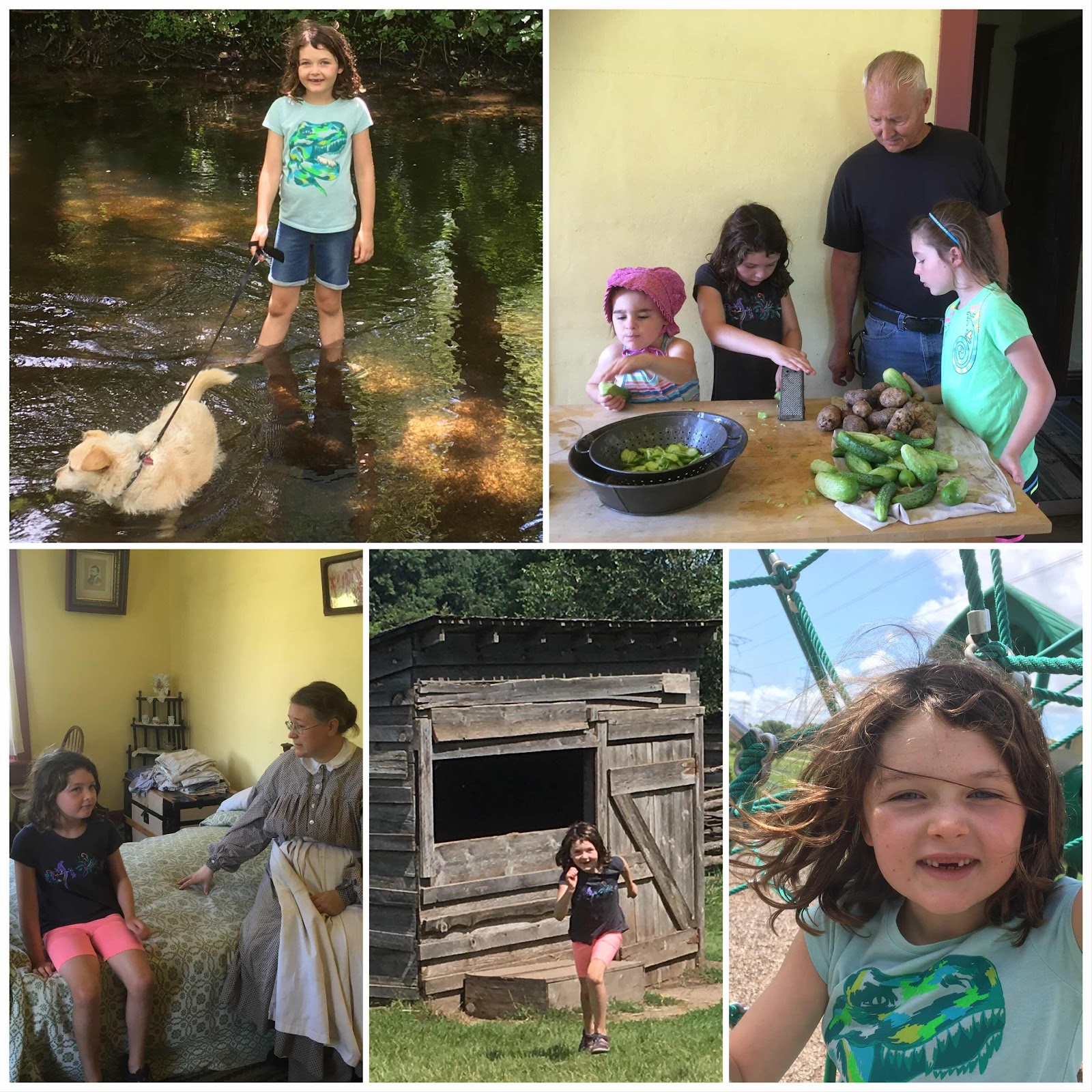 We dropped her back home, I got a much needed haircut from Jill, and Tom and I tried to beat the rush hour traffic back to Monticello - not real successful, as it took us 1.25 hours. Can you believe that it was a quiet, slow-paced evening and an early to bed night for us?

Charlotte has really matured over the last year, was very cooperative and polite, interested in playing games, was much more independent as far as getting ready for the day and for bed, didn’t whine and beg for treats, and didn’t have to be reminded as much to do what she was asked. My little girl is almost 8 years old, getting tall and long legged.

Posted by Bridge Coast to Coast Saga at 7:33 PM