Last week was such a delight! It was so nice to be in Stoughton and to connect with so many great family and friends. I spent the entire day with Pat on his birthday and we had sort of planned to go fishing, but it was a hot and humid day, so we changed the plan and went to Delaney’s Junk Shop in Baraboo - the great thing about Delaney’s is that Dr Evermore’s Sculpture Garden is behind it.  I never get tired of admiring those amazing creations.
The picture is the ‘Amythic Obsession’ at the entrance to the garden with the Forevertron in back. Darn, the tree branch is blocking the top of the rocket ship that will take him to the heavens when he dies (he died in 2020). There is more information and photos on the website:  World of Dr Evermore 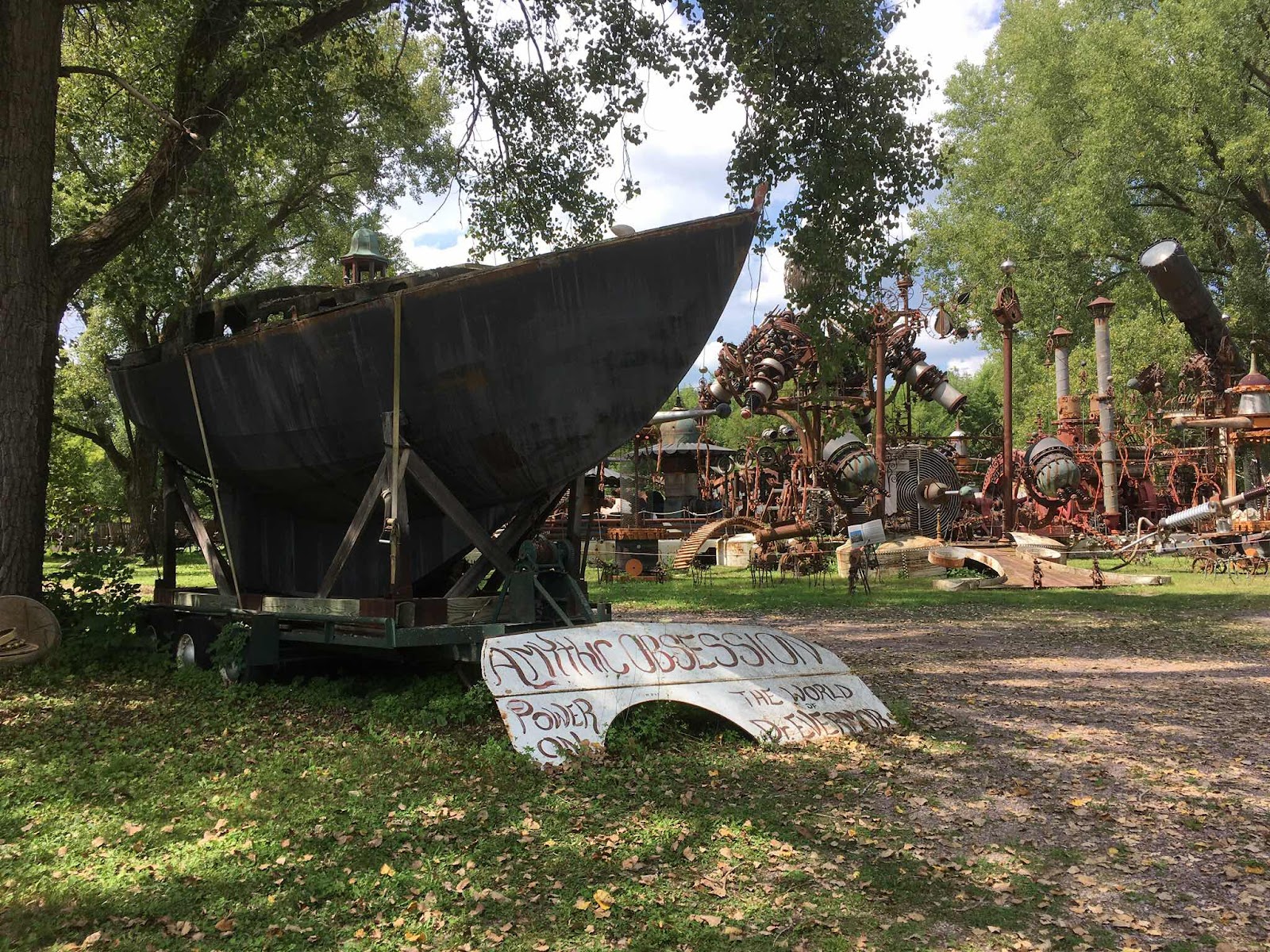 From there, we drove around Baraboo and Madison and I got to see several of the buildings that Pat has worked on this summer. He has amazing plastering skills, that son of mine!  In most cases, the projects are repairs of old stucco and structures. The Wilmer Neighborhood Center (bottom left) had crumbling brick and mortar in the corners and the arch above the window was deteriorated. After our drive, we hung out at their house and I made Collard Greens with Bacon and Ham for dinner - it was a big hit for their keto diet. 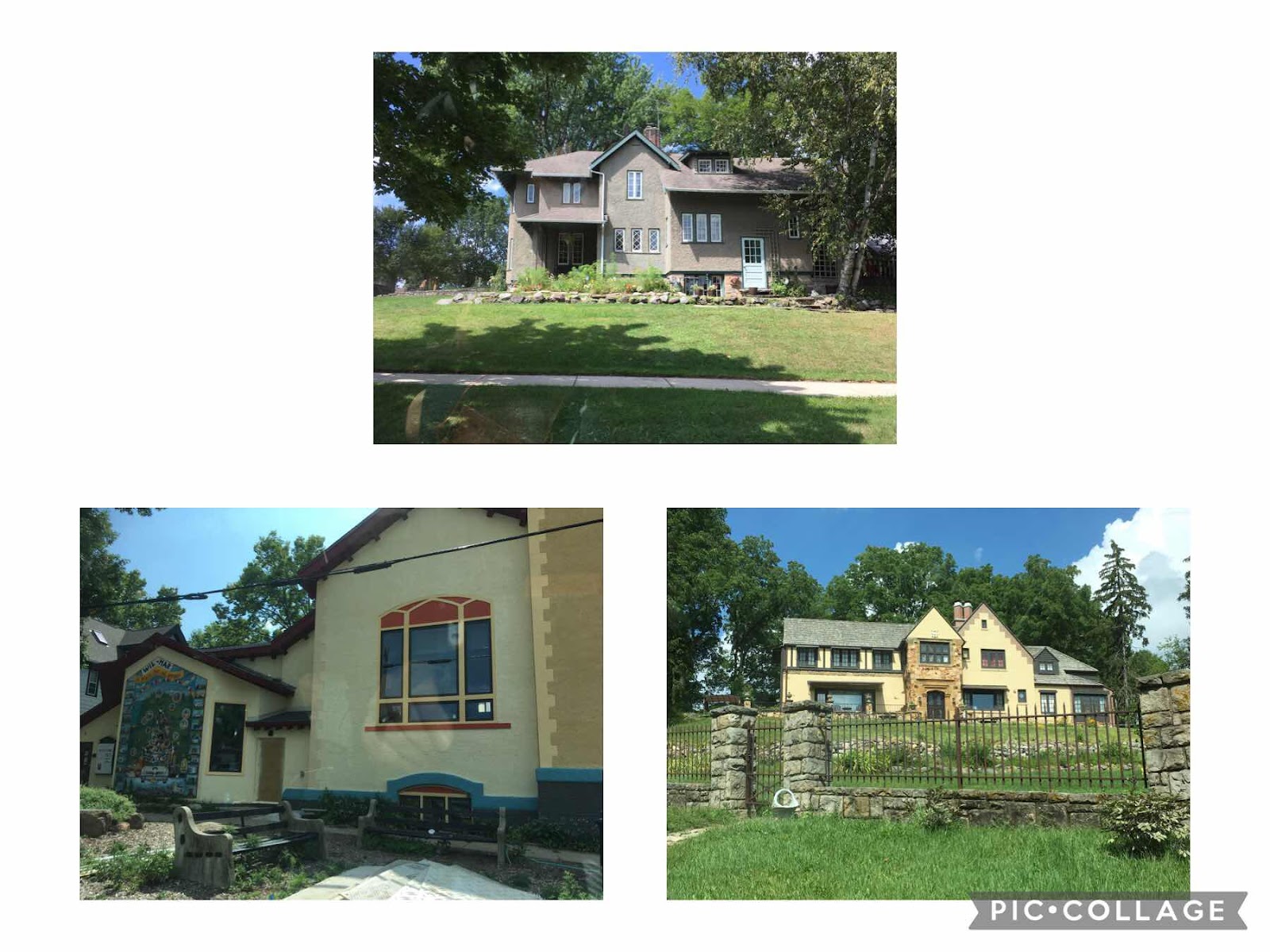 On Friday, after coffee with Pat, Dawn and I got a nice walk in, although we left a bit late and it was starting to get hot and humid again. I hung out with her and Pat and Tracey until it was time to meet Patty at the new Tru Hotel in Stoughton for our 55th class reunion activities.  We managed to get a little pool time in before the Friday night informal gathering that was held on the lovely patio by the river at Nauti Norse. We got there early so we could have their tasty fish fry. Folks started trickling in and we probably had a turnout of about 30-35 classmates.  There was a lot of story telling and laughter going on and we were back at the motel by 10:30 - we are getting old! 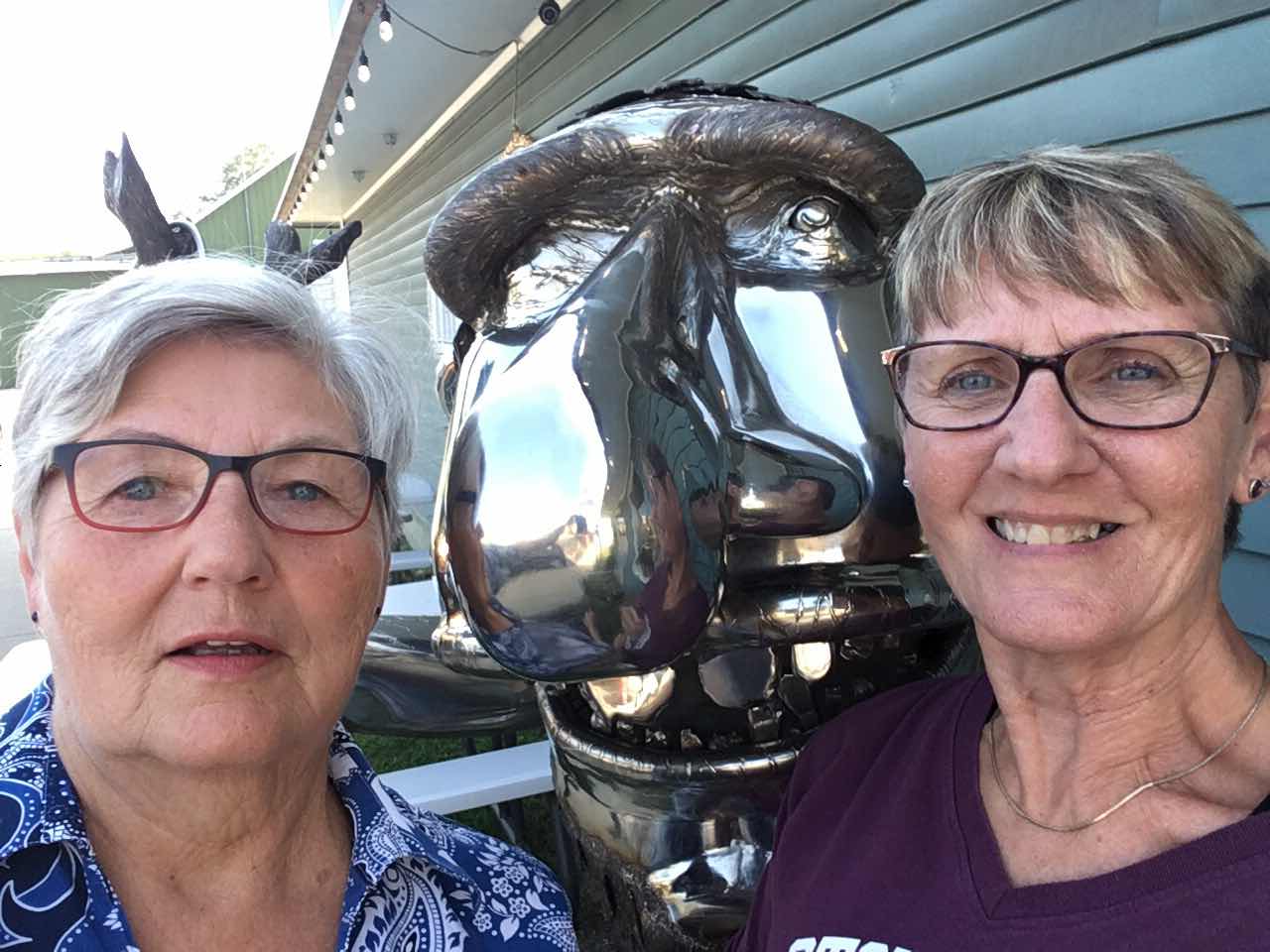 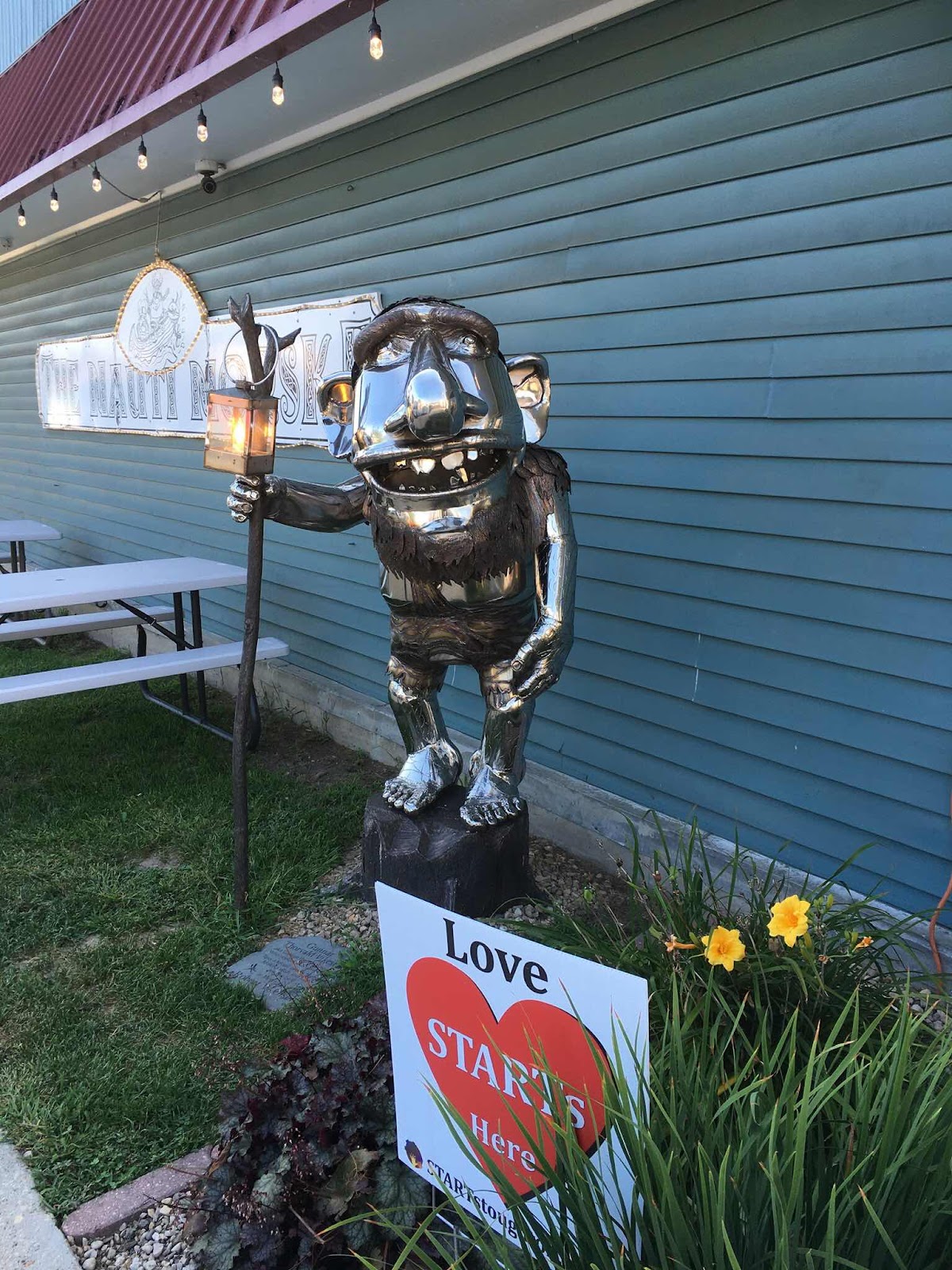 On Saturday, Susan picked us up at 8:30 and we headed to Mandt Park for the annual Coffee Break Festival and Car Show. I saw three of my Starr School Road neighbors just as I was walking in and also saw all of the members of my cousin Larry’s family. We strolled around looking at cars and some of the vendor booths before heading to Livsreise.  There, we met a few other classmates to tour the Norwegian History Museum. The building is beautiful and many of the displays are interactive, so you can learn the stories of individual immigrants, what their journey from Norway was like, how long it took them to get here, and then what life was like when they got settled.
Next on our list was Bill Amundson’s (a local Norwegian story teller and artist) house where he sells his Rosemalled Yard signs. You see the colorful squares all over Stoughton and parts in between. Now there will be one in Ben’s yard in Minneapolis. 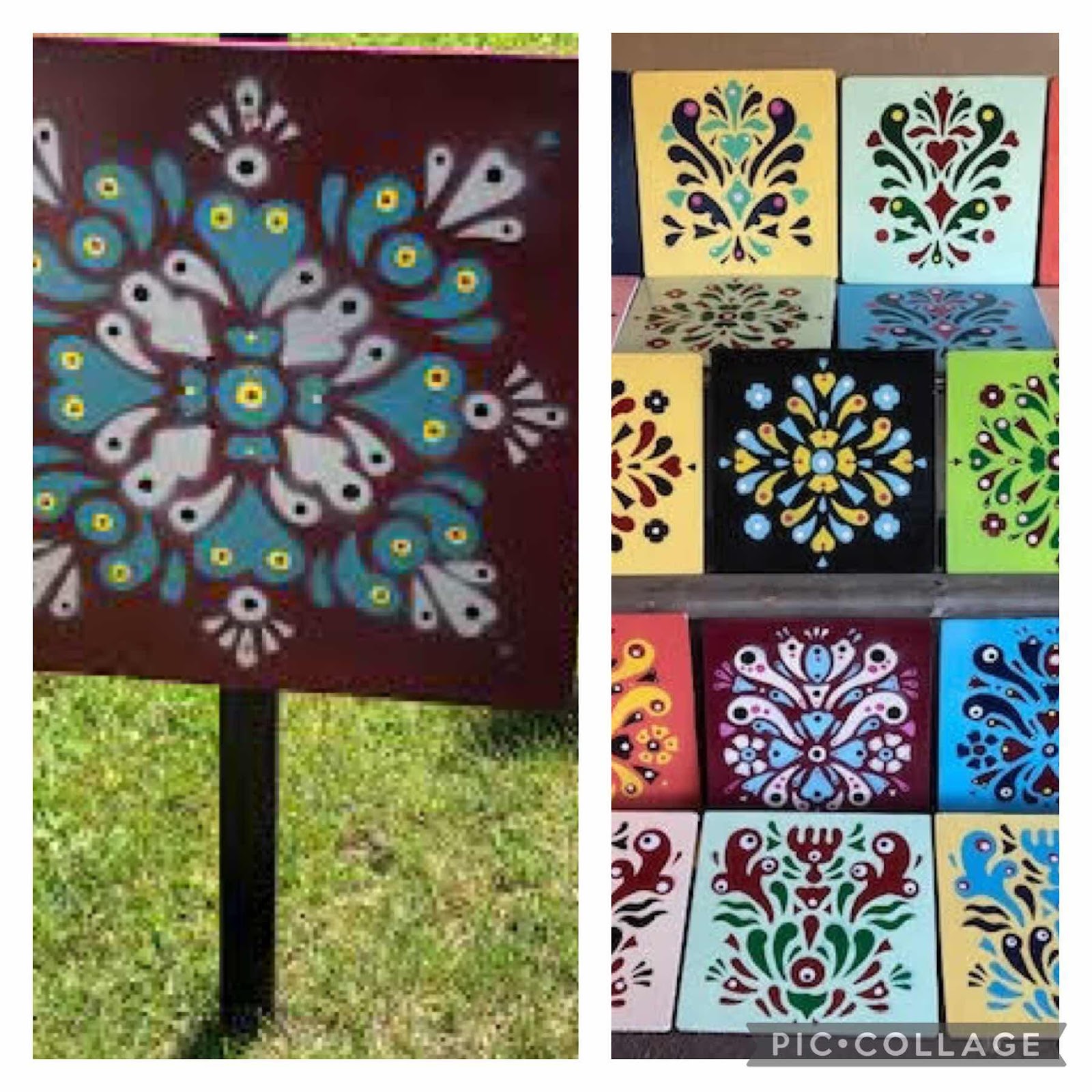 After that, we headed to the flea market at Madison Speedway, but there was not a car in the parking lot and not a flea in sight. We went back into Stoughton and had some lunch at Sugar and Spice and then toured the Stoughton History Museum.  Then it was back to the motel for some down time before the reunion.  It sure was nice to hang out with my besties from high school and it’s so nice that we have remained besties all through our lives.  About 70 people (45 classmates) attended the event at the Country Club and it was a lovely night with finger foods and a very brief program with drawings for door prizes.  Again, we were cleared out by 10:30.
On Sunday morning, after coffee, Pat and I got a nice walk in before packing up for our return trips back home.  I had several stops to make before heading out of town; Dawn’s for zucchini, Swiss chard, and tomatoes, Pat’s for final hugs from him and Tracey, Doug’s to give him one of Mike’s Navy mugs, and a stop to say hello to Karen, Nan, and Dale and to deliver a gift for Monica’s baby shower (the blanket that I crocheted). I was off and headed for Minneapolis, a 4.5 hour drive on a beautiful Sunday afternoon.  I did see some signs of fall along the interstate - the Sumac is starting to turn orange and red. 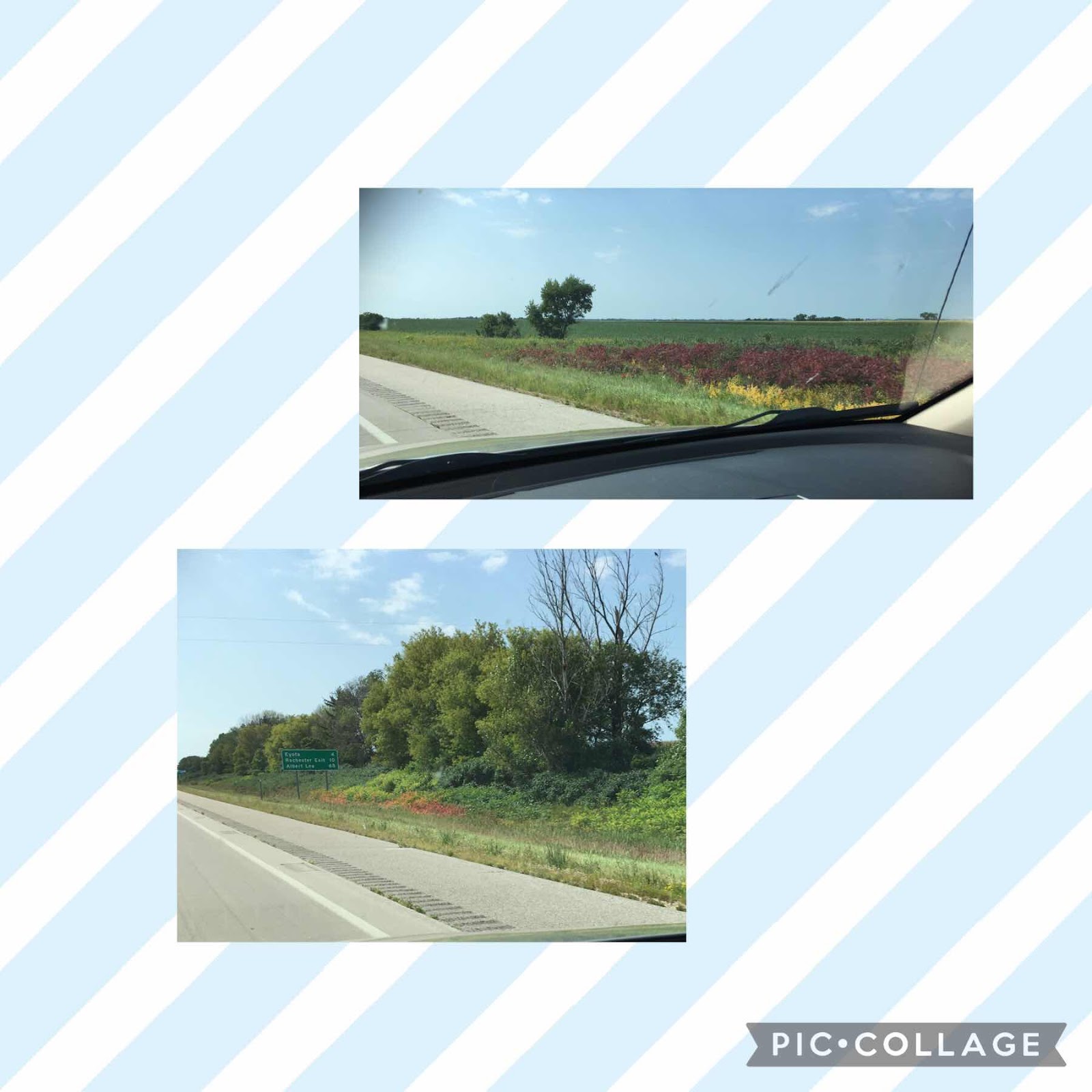 Frisco was happy to see me and I got to see the girls’ new trampoline and have dinner with the family - a nice topper to a great week!
Yesterday was Mike’s birthday and he would be 74 this year. I spent some time looking at photos and stumbled across this goofy one, so I posted it on Facebook and got lots of good responses.  Happy heavenly Birthday to my husband of 45 years and a character who really made life interesting. 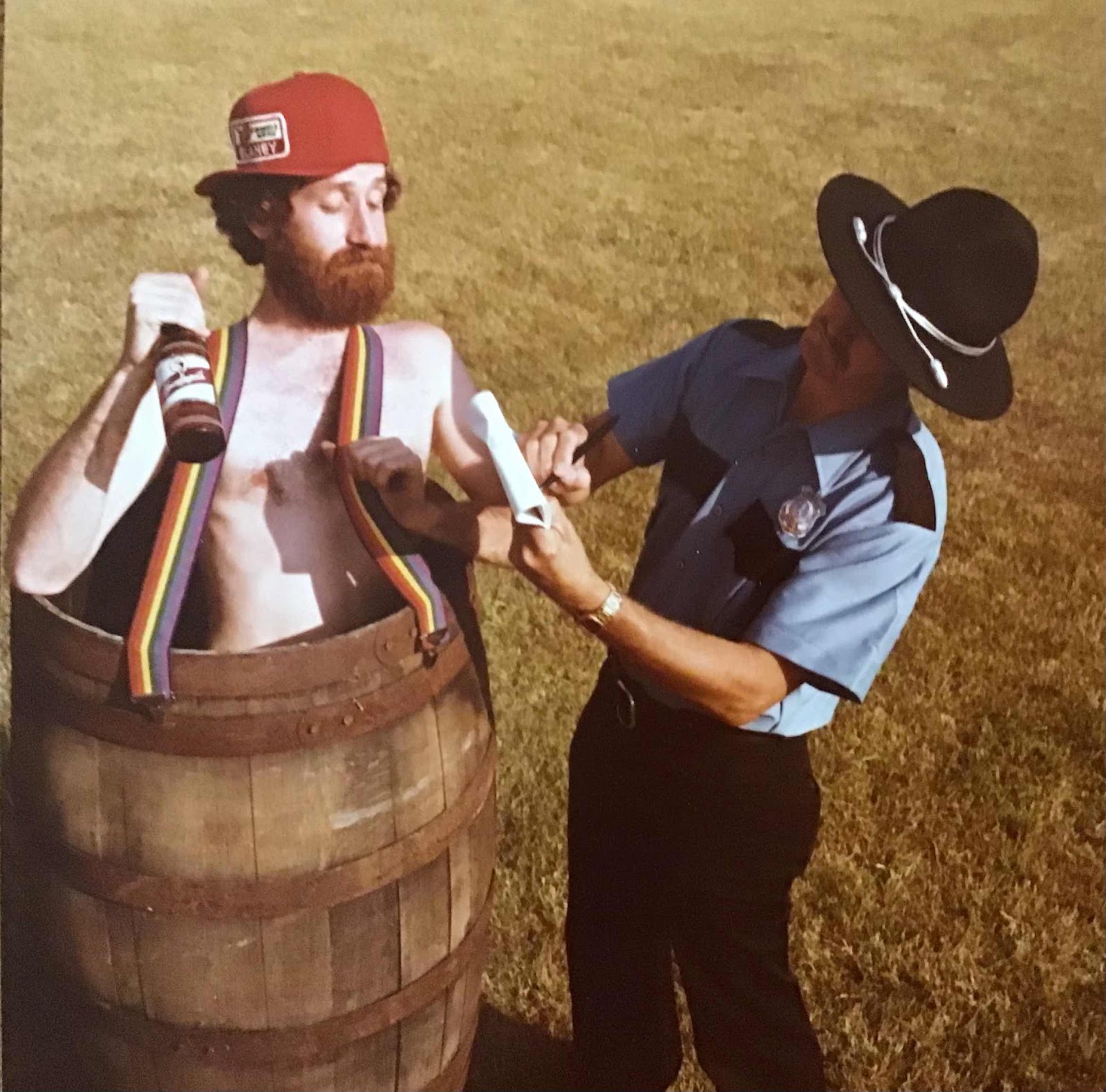 Posted by Bridge Coast to Coast Saga at 5:13 AM