Monday, May 19.  Jill and I spent a lot of time in the kitchen today.  I started out by making a pot of Zuppa Toscana soup and then she spent a lot of time cooking up and pureeing baby food to last for the next 3 weeks, hopefully.  Those girls sure do like eating their solids and have only stuck their noses up at avocado, otherwise they have liked everything that has been offered to them.
We got all of the art packed up today.  The apt is filling with boxes.
I've been thinking a lot about the loss of our friend Danny Vidal back in 2011.  What started out to be a fun and enjoyable pizza party in our community with friends ended with Danny getting ill and ultimately having a massive heart attack.  It's so sad and my heart goes out to Connie.  She has been there for me after losing Mike - guess she knows just how I feel.
Tuesday, May 20.  Jill and I decided that we just had to get out of the house, so after the babies' naps, we fed them and headed to the park, stopping at Garden Cafe for a sandwich along the way.  It was cloudy when we took off but the sun came out while we were sitting in the park.  We put both if the girls in a swing together and they just had a ball, although they're looking pretty serious in this photo.  I think they liked it better when they were in the swing together. 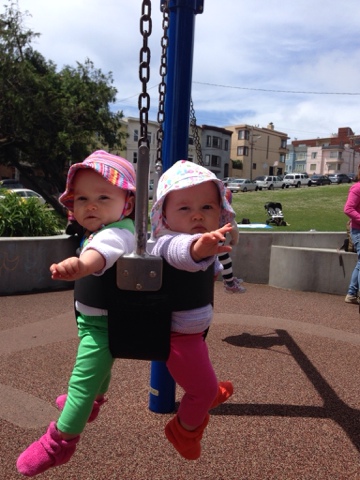 Thursday, May 22.  I got a message from my sister-in-law, Karen to let me know that the memorials for Mom and Dan that they had placed on the living wall at Olbrich Gardens in Madison at complete and in place, right near Mike's.  It is so sad that we lost them all in less than a year.  I miss them all so much, especially Mike and his wise cracks and humor. 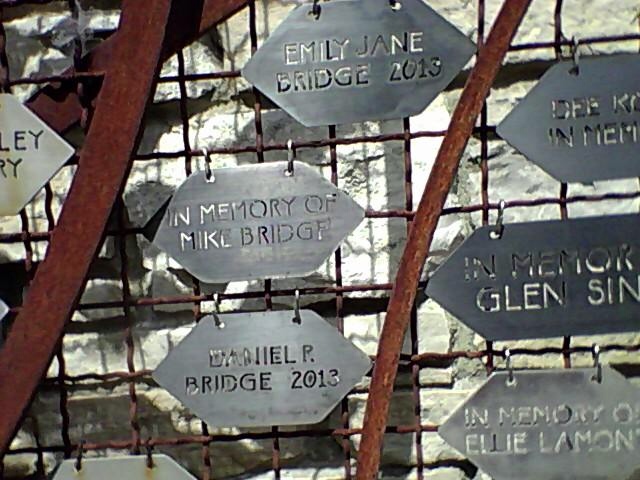 It has been a busy week here, with packing and people coming by to look at the car or to pick up things that have been listed on Craig's List - baby stuff, Ben's bike, and tonight, the dishwasher and pot rack went to Jill's friend, Leah..  The kitchen is empty and bare now, and I won't be falling asleep to the sound of the dishwasher any more.  The clock is ticking.
Saturday , May 24.  I don't have much to write about tonight except that I learned today of a good friend, Jim Russell's passing.  We met at Master Gardener training in Ocala back on 2003 and have stayed in touch ever since.  Mike and I and him and Carol went on a few outings together while we lived there and we tried to see them whenever we got back to Ocala.  It is sad that he is gone, I'm glad that I talked with him a few weeks ago before he got sick.  I feel so bad for Carol and his family.  Rest in Peace, dear Jim.
I was able to get an appointment with Jill for a haircut today.  What a nice feeling it is, to actually out on makeup and go to the salon for some "me" time.  She had only one appointment after mine, so I strolled along Fillmore St, window shopping and going into a few of the shops - many that are specialty and very pricey clothing stores.  I did buy a book that I've been looking for and I also stopped for a Chai Latte and a frozen yogurt.  Parking on the street cost me $7.00 for 1.5 hours - I now have to replenish the utter purse in my car.
Sunday, May 25.  The house was a bustle of activity this morning the the family preparing to go to a party with friends.  What an ordeal it is to get everything ready, packed, the kids fed and dressed, and then all of them loaded in the car.
I took a drive to Pacifica, hoping to say hello to folks we know when we worked there back in 2007.  Everyone has moved on.  Driving through there, I was glad that we aren't there any more as it is looking pretty crowded and dumpy with a lot of old, junky, permanent RVs.  No thanks.
From there, I did some shopping and picked up a new pair of jeans and a t-shirt.  Back at home, I did some reading and took a little nap.
Posted by Bridge Coast to Coast Saga at 7:52 PM