Thursday, November 20.  The highlight of this week is that I got together with two of my nieces for dinner last night.  Ashley (from Kansas City) was in Scottsdale for training and she and Monica hadn't seen each other for 11 years.  We met at Olive and Ivy and had a great dinner together with lots of good conversation.
I don't have plans for the weekend, but I know that my days will fill up and there will be plenty to do.  I'm still working on hats and mittens for the grandkids and the thought just crossed my mind that I have only about 3 weeks before I will need to get them shipped so they arrive by Christmas.
Friday, November 21.  My last statement that I don't have weekend plans wasn't right.  My Friday plans were for Connie and I to join the Hooveys, Chris and Norm, Carl (Norm's brother) and two other couples for happy hour at Val Vista Village and that started at 3:00 this afternoon.  We were entertained by a couple from Campbellsport, WI, a husband and wife who provided us with some good country music and some dancing too.    We had lots of fun and that is such a beautiful place. They tore down a building last summer and expanded the patio and dance floor.  Happy hours are pretty popular around here. 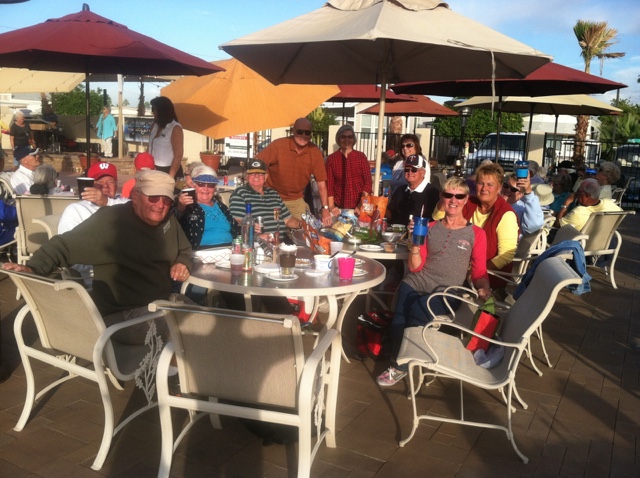 Saturday, November 22.  Whew!  Today was a busy day, starting with my morning walk, as usual.  I then picked Pat up and we headed out to some garage sales, but they were sporadic and by 10:00 we had both had enough.  After I dropped her off, I went to the grocery store, since I had a hankering for s pot of chili.
I was making chili when Connie stopped by to see if I was able to go to Chuck and Kathy's at 2:00 to talk about Thanksgiving dinner (I am having family dinner with Monica and her family on
Wednesday night).  At 4:00 when we left there, I was feeling pretty good from that large glass of wine that Kathy poured me and I went home and enjoyed a bowl of chili before having to get ready to be at the clubhouse by 5:00.
Ten of us piled into a van and headed to the Gilbert Observatory that is located by the Riparian Preserve.  Several men from the Astronomy Society showed up, two of them operating the large telescope in the observatory and one outside with his own, very large, telescope.  We started by looking at The Owl, a collection of stars in Cassiopeia in the northern sky.  As it got darker and we went back to it, you could actually see the shape of a stick man, complete with two bright eyes, arms and legs.  We also looked at the planets Uranus and Neptune and two stars that revolve around each other - the space between them looks like a half-inch when looking through the telescope but the actual distance in space is something like 83 billion miles apart.
The discussion about the distance from us is overwhelming and I can't remember any of the numbers that he gave, but they were in billions of light years.  We looked at starts that exploded back when Christ was born and they are still floating around out there.  He told us of a place just east of here (Picket Post Road, just east of The Boyce Thompson Arboretum) where you can see the Milky Way with the naked eye.  He described the place as a bowl, where the temperature at your head is 20 degrees warmer than at your feet - and people go there to watch the stars because there is no light pollution.  Some of us were very interested in doing that some time.
I learned a lot on this outing.  It was a full, busy day and I was tired and ready for bed when I got back home.
Posted by Bridge Coast to Coast Saga at 7:26 AM