CTuesday, November 3.  I have something to write about tonight, and strange it is.  The last 2 days, I have noticed Frisco sniffing around the foundation of my house, getting excited like there is a critter there, like he did when he chased chipmunks at Pat's house this summer.  Tail wagging, nose to the ground, and sniffing like crazy.  Then tonight, he's doing the same thing inside and then I hear a cat meowing.  That reminds me that I heard a cat meowing the last 2 nights.  And then, while I'm watching a movie, a knock comes at my door.  I ask who is there and a guy says, "it's Shawn, I live behind you and I think my cat might be under your house."  I went outside and met Shawn, then let him crawl into the crawl space under my house to get his cat, Spade.  Thinking back a couple of days, I had the cover pulled back from the crawl space because I was messing with the cables and apparently, I left an opening big enough for the cat to get in there. Then, when Frisco starting sniffing around there, i thought it might be mice, so I put a mouse trap under there and moved the cover back tight, apparently trapping the cat under there. Luckily, he didn't eat the poison and has been rescued from the dark, dirty, depths under my house.
I finished pricing my things for the patio sale on Saturday and also priced Arlene's items for her.  I'm hoping for a successful sale that will mean that I have fewer items to pack when the time comes.
Wednesday, November 4.  It is a cool but beautiful morning as a front rolls through to the north, large tufts of gray clouds, spotted with bright white where the sun touches the edges, and a blue backdrop spotted here and there.  I heard raindrops a good part of the night and the high for today might not reach 70 degrees.
I did not hear a cat meowing during the night, so that means that the neighbor was successful in getting his cat out from under my house.  I am so relieved that it wasn't some rodents or that the cat  didn't die under there.
I helped Arlene with some yard work today as she wanted a plant moved from a pot to the grounded to dig out a couple of dead rose bushes.  Boy, the ground is rock hard and she had to go get a heavy duty digging tool to break it up.  We both worked on it and were able to get the plant in the ground.
Connie and I went to do the shopping for the groceries that we need for making meat lost for TGIF on
Friday night.  It looks like we are cooking for about 45 people and I'm a bit nervous as I have never done this before.  I think we will be fine.
We stopped by Sue's house to say goodbye to her, as we had learned earlier that her house had been sold and she would be leaving tomorrow morning.  She is happy to move with her family to KC, but it all happened so fast.  Social services determined last week that she should not be living on her own, they contacted her family in KC who arrived here in Sunday, they sold her house on Monday (probably gave it away with everything in it), and they are leaving tomorrow.  I hope she will be ok.  She has been active in this community for the last 20 years and has done so much to help individuals and the entire community.  We will miss seeing her happy smile, her wobbly little dance moves, and feeling her friendly, open arms in a hug.
Sunday, November 8.  I'm remembering my dear brother-in-law, Dan on his birthday today.  He would be 66 years old today - it's sad that he isn't with us to celebrate.  Miss ya, Dan!
The last few days have been busy.  Friday, preparing and cooking meat loaf with Connie for the TGIF dinner on Friday night for 50 people.  It was well received, we got lots of compliments and it disappeared.
Yesterday was the annual community patio sales and it was another waste of effort.  Why do I keep doing this when every year I say that I won't do it again.  At the end of the day, most of the stuff was donated to Sunshine Acres, a worthwhile cause.  I was worthless the rest of the day, ready for bed at 7:30.
This afternoon, I took the bus with several folks from the park to see the Chandler Symphony Orchestra and the show was very enjoyable.  Pat and Roger invited me for brats tonight and that was a great topper to the weekend.
Rita sent me this photo today, taken in 1962 on Easter Sunday. 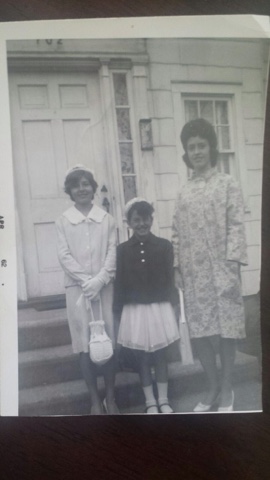 Posted by Bridge Coast to Coast Saga at 9:35 PM