Tuesday, November 10.  A busy day today, yesterday, not so busy other than having Pat, Rog, and Connie for grilled chicken dinner.
I slept in this morning until 7:30 - what is going on, that rarely happens for me.  I was awake for a while during the night with coughing and breathing problems, I'm sure it is allergy and dust related and will see the doctor today to be sure my lungs are ok.
I walked, then Connie and I went to the library to get movies - they have a nice selection, although not the newest and most recent, and we've been going about once a week.  We also picked up free culture passes to see the Heard Museum in downtown Phoenix on Friday - we are taking the light rail with Pat and Roger.
Jan treated me to lunch at Lo-Lo's today and the chicken and waffles was yummy, as usual.
I had an hour to relax at home before heading to the doctor and yes, I'm on a cycle of Prednisone to clear my lungs once again.  I don't think the Arizona air quality is good for me as I seem to have problems every fall and I'm not alone according to the doctor.
I had another short break at home before heading to the clubhouse for the HCC meeting, where I filled in for the secretary who has recently resigned - last minute with no notice.  How rude is that?
Wednesday, November 11.  The Veterans Day program at the clubhouse was very nice today, definitely emotional right from the get go when the Honor Guard placed the flags in their stands - that was Mike's job at the Navy reserve meetings in Madison and I saw him do it at parades through the years.  The performer sang, told a few stories, and was accompanied on the piano to several songs about different parts of America and many patriotic tunes.
Saturday, November 14.  Yesterday was a day of culture for me, Pat, Roger, and Connie.  We met at my house at 9 am and drove to the park and ride lot at Mesa Drive where we got on the Metro light rail to head to downtown Phoenix.  Pat and Roger got us senior tickets for $2.00 for an all day pass on the train and Connie and I picked up free culture passes to the Heard Museum from the library.
On our arrival, we took the guided tour of the various galleries, then had a bite to eat in the patio and toured more of the galleries.  One of the saddest stories I have ever heard was that of the white people sending the Indian children to white schools, stripping them of every dignity and culture they had grown up with, and molding them into what they considered to be the way to be.  It made me think of Adolf Hitler and his trying to create the perfect race but this happened right here in our country. What a cruel world we live in.
There was also an exhibit on the photographs of Frida Kahlo, a collection of thousands, although 250 were on display.  An interesting woman and a very interesting collection.  This excerpt is taken from the museum's website:

The Heard Museum presents a selection of more than 240 images from the 6,500 which are part of the Blue House archive. The photographs, along with Frida Kahlo’s personal items, were locked in a room of the Blue House, the residence where she spent most of her life, and revealed to the public in 2007. The images have served as memories to Frida, as work tools or as a means to exorcise solitude. The exhibition Frida Kahlo—Her Photos, curated by the well-known Mexican photographer and photography historian Pablo Ortiz Monasterio, shows the importance of this medium in Frida’s life.

The photographs – taken by Man Ray, Martin Munkácsi, Tina Modotti, Edward Weston, Nickolas Muray, Manuel and Lola Alvarez Bravo and others – were cherished by Kahlo when she was immobilized and isolated in her bed.

Frida Kahlo had a very special relationship with photography. Besides her personal background – both her father, Guillermo Kahlo, and her maternal grandfather were professional photographers – she brought different uses to photography: she collected daguerreotypes and visiting cards (carte de visite in French or tarjeta de visita in the original) from the 19th century, she kept photographs upon which she put her personal stamp, cutting things out from them, writing dedications on them and personalizing them as if they were paintings. Some of the images have red lipstick kisses, others are trimmed or folded. Some have personal notations on the reverse.

These images give visitors an intimate view of Kahlo’s life. The exhibition does not intend to depict a chronological biography, but rather to exhibit parts of the personal history of an artist, of a country and of a period. It is a photographic collage made up of images that allow us to discover new facets of a key figure of the 20th century.

For Frida Kahlo—Her Photos 241 photographs have been chosen, organized into six main subjects: The Origins; The Blue House; Politics, Revolutions and Diego; Her Broken Body; Frida’s Loves and Photography. The images throw new light on Frida Kahlo’s work as an artist, a way of understanding her life in historical and cultural context, and a demonstration of her passion for Mexico.

After riding the train to the end if the line and back to the parking lot, we found Roger's tire to be flat and they had to call AAA for assistance.

Tonight's news was all about an ISIS terrorist attack on the people of Paris, over 140 people were killed at various public events, a concert, a soccer game and on the streets.  Sad, Sad, Sad!

This evening, Connie, Arlene, and I went to the Desert Botanicsl Gardens to see Big Nick and the Gila Monsters - a lively blues and jazz concert.  It was a beautiful evening, kind of cool, but there were heaters scattered around to help keep us warm.  The music kept you moving and that helped too.  Thanks to Sharla for giving us her tickets and I hope that she gets to feeling better soon. 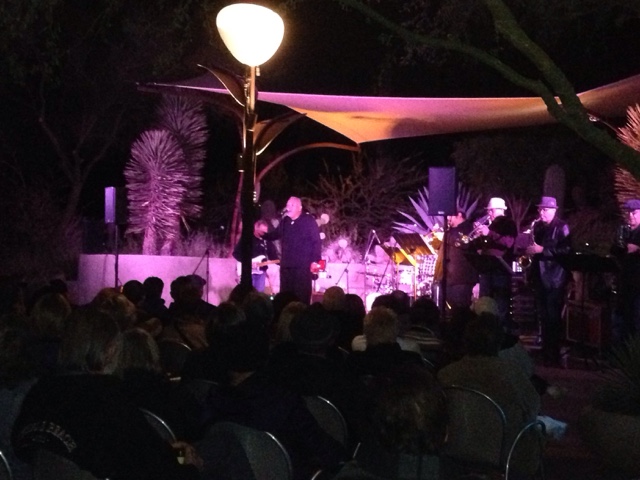 Sunday, November 15.  It was a stay at home kind of day, complete with dark skies and off and on rain, followed by a cool down over the next few days.  In fact, night time temps are expected at 39 degrees - brrrrr!
My highlight was a FaceTime conversation with Ben and the grandkids.  They were in the play kitchen and Charlotte served me some vegetables that were healthy and also had some juice in them. I also got an open invitation to come and she will cook for me.  Norah's contribution was tea and I got a cup of water from Camille.  It's so nice to see them playing as if I'm right in the room.  I learned that Charlotte has moved up to the next level in her swim classes and will be doing a lot more swimming on her own.
I plan to select some chapter books on my next trip to the library, to read to her In the afternoons when Jill needs a break or to get something done without interruption.  I think it will be a great activity for both of us.
It was a lazy day - I read, I bathed, I finished a jigsaw puzzle, I watched the movie, "Frida", the film about the Mexican woman who was featured at the Heard Museum on Friday, I walked the dog, had some phone conversations with family, and truly enjoyed a day at home.

Posted by Bridge Coast to Coast Saga at 7:09 AM