Tuesday, May 17.  Last Sunday, I was talking to Tom and he invited me to join him on a road trip up to the Mogollon Rim to check out some National Forest campsites northwest of Payson.  There was also one of my membership parks north of Payson that I have been wanting to see and he was willing to go off in that direction too.  We each packed a lunch, put Frisco in the back seat and left here around 8:30 yesterday morning.  First stop was my membership park at Clint's Well.  The directions in my guide were incorrect and we ended up going 5 miles farther, to a residential area but no RV resort in sight, and not finding the place.  Heading back in the direction we had come, there it was, right across the road from a forest service campground, so we could check them both off the list.  I stopped at the office and the staff sure wasn't very friendly, even when I told them I was an affiliate member - they quickly told me they were full for the summer and I wasn't even allowed to drive down the road in either direction to check out their sites.  Apparently, they had some recent break-ins and tightened up the rules.  I asked if I could use the restroom facility and they reluctantly said, yes, so I walked Frisco on the leash and tied him up to a post before going inside and as I walked back to the car, the 2 women were chatting and told me that dogs were not allowed in any of the buildings, assuming that I had taken him inside.  I told them that I knew that was a rule in every campground I've been in and that I had tied him outside.  "OK", was all they said. I really didn't get a good feeling for that being a friendly place that I might consider staying at, certainly not for a leisurely week or so, but maybe as a base camp for exploring the area.
We headed back toward Payson, stopped at a nice city park and had some lunch, gave Frisco a chance to walk and stretch out, and enjoyed watching a kindergarten class from a nearby school playing on the playground.  After lunch, we drove west out of Payson to Young Road and when we found the forest road that led to the campgrounds that Tom was looking for, it was closed for tree removal work.  Darn!  So maybe a stop at the ranger station would give an answer as to when it would open up again, but that was closed too.  I did learn that there were designated campgrounds in the forest where you could camp for $20/night (half price with the senior pass) and those campgrounds probably have a camp host and a bathroom facility, fresh water but no electric or dump station.  You also have the option to pull off in the woods, at least 300 feet from the roadside, and dry camp for free - no services available.  It might just be fun to try that some time - it would be roughing it smoothly, not something I would ever do all by myself.  I'm not sure how long my propane tank and batteries would last, but I'm thinking at least a few days.
We got back home around 5:30, just in time to feed Frisco and get out evening walk in. It was a nice day and good preparation for my upcoming trip and long days in the car.
There was a purchase agreement for my house in my inbox when I got home.  After reading through it, there were a few clarifications that I needed and I sent it off to Denny (my brother-in-law) to read.  I also went to the office to talk with the manager to get a few questions answered.  Things are moving right along.  We have to wait for the buyers to be approved as residents, finalize the agreement, sign over the titles, and then I will get half of the purchase price.  Very doable.
Thursday, May 19.  I got word today from the office that the buyer's application was approved and I also received the amended contract from their lawyer.  I'm ready to sign, we just need to decide on a closing date and give notice to terminate my lease.  We're moving right along.
I went through my clothes this morning, trying to determine what to take and what to leave behind and what to get ride of, and I recycled of a lot of things that I haven't worn in a while.  I was trying to decide on an outfit for my class reunion.  I think I've got it without having to buy anything new, although I seem to always be on the lookout for something different.  In fact, shopping is what I did after finishing that project and I came home empty handed.
Last night, I finished the jigsaw puzzle that I have been working on for 2 months, one of the toughest ones that I have ever done - Vincent Van Gogh's "Lilies".  On completion, I was missing 4 pieces - how could that happen with a brand new puzzle?  I was ticked off, but after thinking on it for a little while, I went to the closet and looked in the box top where I had been keeping and sorting some of the pieces and, sure enough, tucked under some flaps were all of the missing pieces.  Yay! 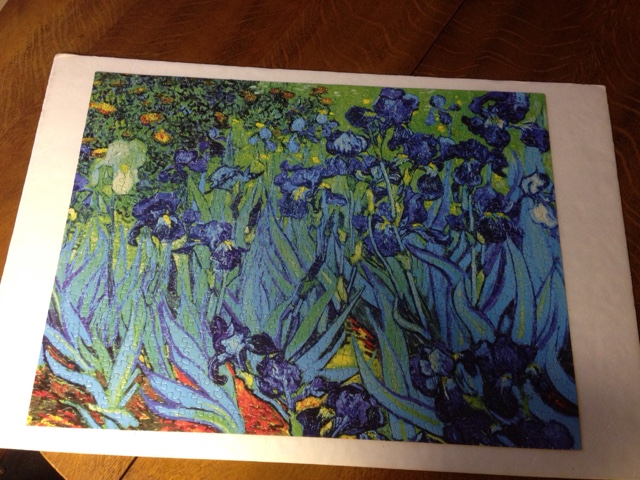 Friday, May 20.  Things are moving right along with the house.  I learned that the buyers have been accepted, I signed and sent the purchase agreement to their lawyer, I gave the office a notice to terminate my lease and learned that we can sign over the titles and their lease can be signed as soon as they have homeowners insurance.  I can then change my homeowners to a contents only policy.  Getting close now.
Arlene invited me to join her family, Betty and Jamie at Rustler's Roost for dinner tonight.  We had a nice view of the valley from our booth and dinners were "iffy" - is that a word?  My ribs were great, the family style salad was soggy, the folks that had steak liked it, but the 2 who ordered fried chicken got large servings of almost inedible, dry chicken.  They ended up sending it back and not having to pay for it.  Still, it was an enjoyable evening with a great group of friends, there is always much laughter with these folks. 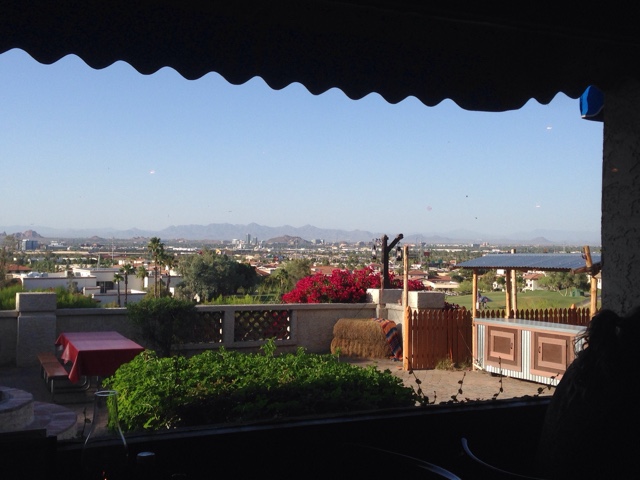 The view from our booth. 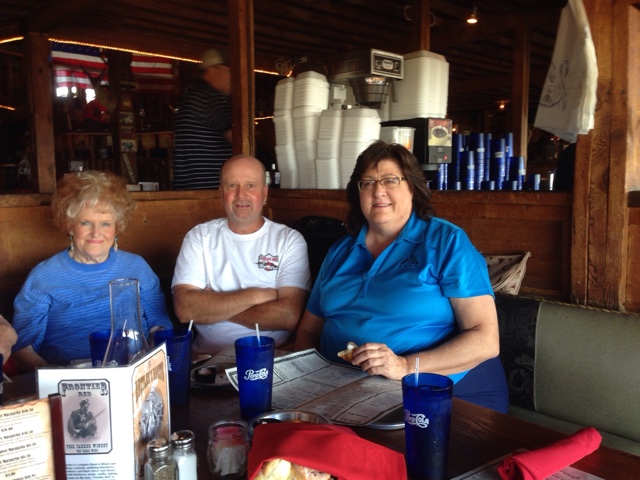 Betty, James, Karin
Saturday, May 21.  I tried to find a place for Connie and I to camp this weekend and everything was booked, so we decided to take a road trip to Tucson for a day of exploring.  Today is the anniversary of Connie's partner, Danny's, heart attack that led to his death on the 25th, 5 years ago, so a good day for us widows to be together.  We headed out at 8:30 this morning and went straight to the visitor center, had a nice chat with 2 friendly ladies, then walked about 5 blocks to the shrine of  El Tiradito – known as The Wishing Shrine.  The legend, centers on a love triangle where a man falls in love with his mother-in-law and is murdered by her husband in a jealous rage.  The most common version of the story says that the murdered man was Juan Oliveras – and due to his sin – he was disallowed burial on consecrated ground, left to rot where he fell, Juan was given the nickname “The Castaway.”  His lover felt such remorse for his death that she buried him at the stoop of her house and built a shrine above his grave.

El Tiradito invites anyone wanting to make a petition to Juan’s ghost to bring a candle; it’s said that if one’s candle remains lit throughout the night their wish will come true.  As legends often go, it’s a tough one to substantiate. What is certain, however, is that Juan, Old Jack of the Barrio, has become something of a folk anti-hero, and perhaps the only sinner recognized on the National Historical Register.  The only remaining part of the house is the 2 steps of the front stoop and the wall of the shrine. 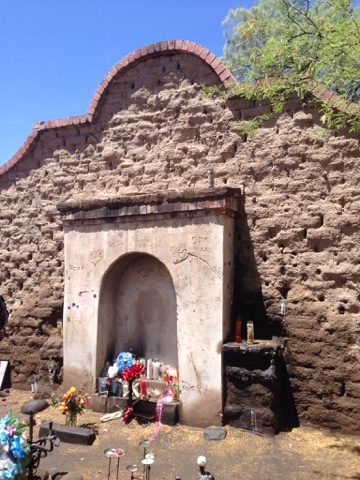 From there, we boarded the street car, rode it to the end of the line at Helen Street on the University of Arizona campus, then back west until we got off at 4th Avenue, an area of thrift stores, hippie shops, boutiques, bars and restaurants.  There were a lot of homeless folks loitering and strolling around.  We stopped for a sandwich and a beer and people watched from a table next to the sidewalk.

Back to the car, we headed to Ted DeGrazia's gallery, home and studio.  DeGrazia was the son of Italian immigrants who settled in territorial Arizona.  He was a talented artist; painter, builder, sculpturist and know by everyone in this area.  I have a few of his pieces and picked up a couple of cards to frame.  The grounds and buildings are impressive, nestled on the foothills of the Catalina Mountains, built from local materials and very Spanish in style.  His works of art are everywhere and as we approached the entrance, an elderly relative was talking about how he loved rocks and the colors that streak through them.  When he was near the end of his life in 1982 at the age of 73, he told his family not to bring flowers when he died, as they would also die, but bring him his rocks and they would live on forever. 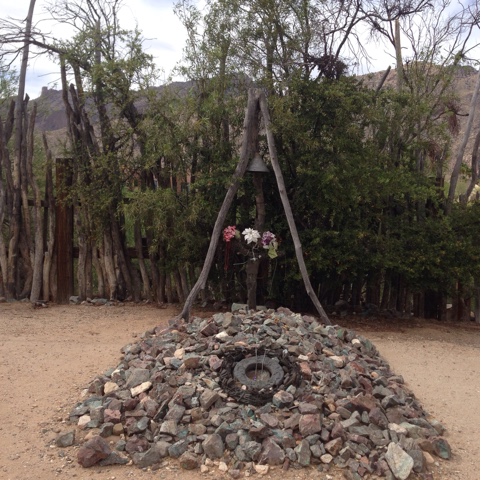 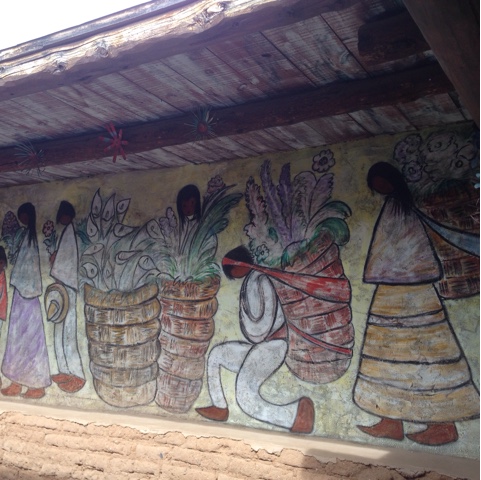 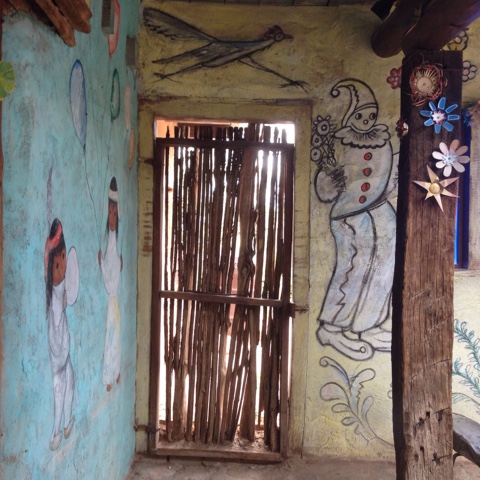 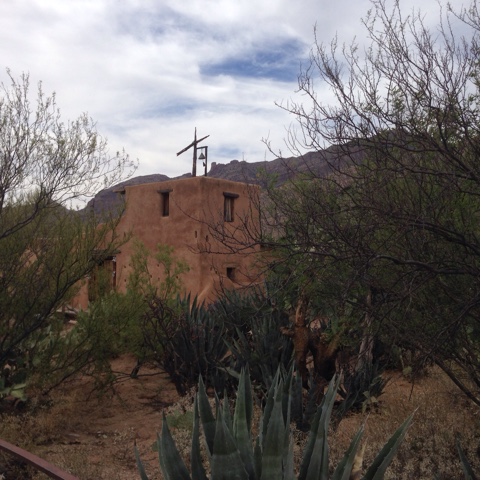 All the way home, we bounced around in my car like an old jalopy, cracking up laughing because Connie thought her boobies were going to hit her in the face.  The things that I have hanging from my mirror were flying around and hitting the windshield.  I am definitely taking them back to Costco tomorrow to either figure out what's going on or to get different tires.
And when I got home and looked at my phone, there was a new photo of my darling granddaughters, can't help but share it here. 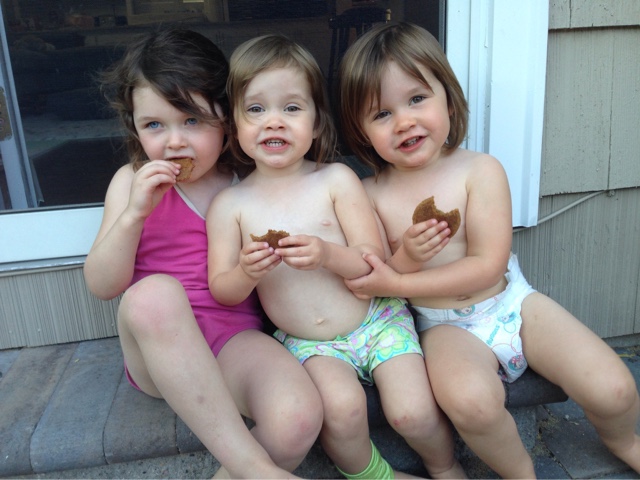 Charlotte, Norah, Camille
Sunday, May 22.  I was hungry for coleslaw, so made a big bowl this morning, then decided to use up the bananas that I had in the freezer, and that is way too much food for me, so I invited Arlene, Connie, Tom, and Kirk to happy hour and burgers this evening.  Everyone bought something yummy to share, we had lots to talk and laugh about, and we hung around until after 10:00 when Arlene started to fall asleep in her chair.  It's so nice to have good neighbors.

Posted by Bridge Coast to Coast Saga at 7:34 AM