Monday, July 11.  I had a nice walk with Dawn this morning and we sure did talk about lots of subjects, mostly family and health issues.  I washed the car when I got back home, it really needed it after the buildup of bugs from KC to MN to WI.  Speaking of bugs, the fireflies have been numerous and fun to watch in the evenings.
We all went to Costco this morning (Tracey bought a printer for her mom that they didn't really like) and then Pat suggested Players Pub as a good place to have a burger.  There is nothing quite like a good bar burger and our choices all proved to be yummy.  If I weren't the designated driver, I would have had a beer. 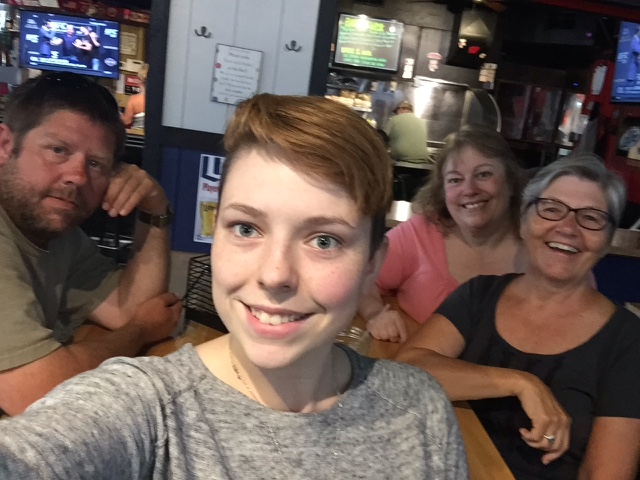 Tuesday, July 12.  I hooked up my trailer last night, so I could pull out by 7:00 this morning.  My first stop was to empty my holding tanks at Camping World, then had the air in my tires checked and was right on time to meet Pat and Rog in a large lot near the interstate.  We headed north to I-39 through Stevens Point, Wausau, Tomahawk, and Minoqua on our way to Jim and Sue's Shady Rest in St. Germaine.  The woods gets thicker and thicker the farther north you get - it's beautiful!
It was great to see them again and we got right down to business with conversation over Bloody Mary's, or another cocktail of our choice.  We all have the recent sale of homes to celebrate and, as always, just plain getting together.  We enjoyed the beautiful north woods surrounding their home, took a walk, had a great dinner, and then played "Pass The Pigs" and "Farkle".
Wednesday, July 13.  After coffee and a yummy breakfast this morning, we headed out to Lake Shannon and hiked the path around the lake, stopping every now and then to enjoy the beauty of our surroundings.  While there, we spotted some loons and Bald Eagles flying overhead. 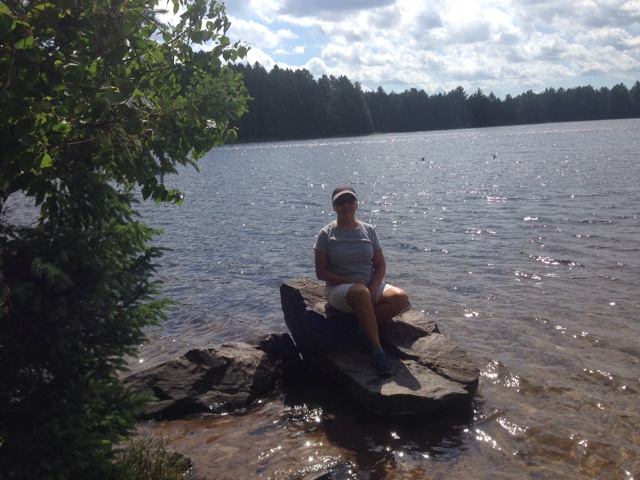 Can you see the Loons behind me? 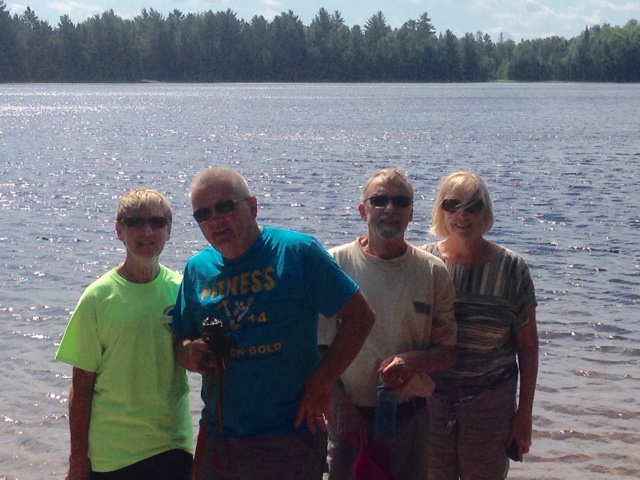 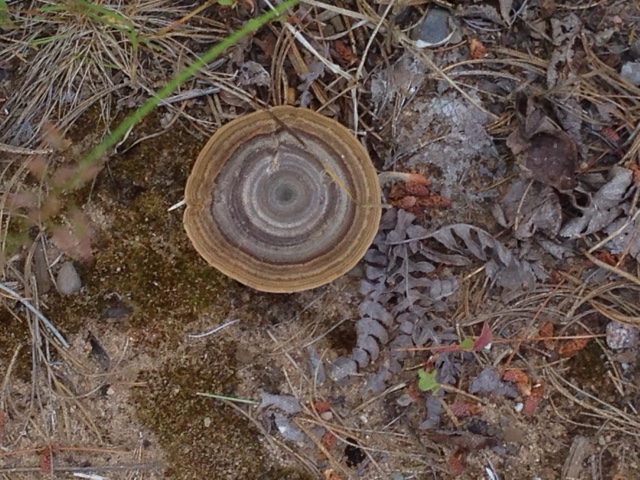 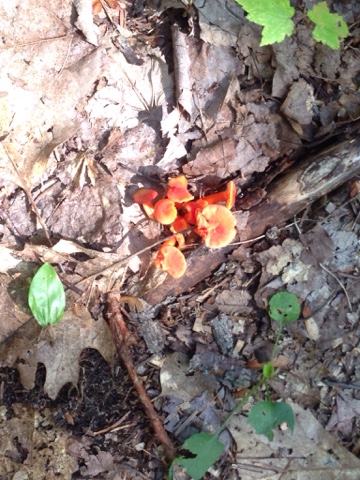 There's a fungus among us. My spot at Jim n Sue's Shady Rest.
Thursday, July 14. Happy Birthday to my dear, sweet, niece, Monica.  We said our goodbyes after breakfast this morning and headed down the road, going east instead of west.  Earlier this week, there were terrible storms and flooding along US Highway 2 that caused many sections of the road to flood and much of it is closed between here and Duluth. We came up with Plan B which is to head east toward Sioux Ste Marie and see the southern shore of Lake Superior instead.
We had light drizzle and rain and had to slow down for a few turkeys but the 3-hour drive to Ishpeming, MI was easy with good roads and not a lot of traffic.  Once we got setup, we headed to Marquette and took Lakeshore Drive all along the beautiful lake and stopped to take a walk with the dogs along the hiking/biking path.  It is cold - 63 degrees with a strong wind coming from the west.  The shoreline is rocky and you can see several scattered islands not far from shore.  We drove through Presque Isle Park and it was gorgeous, with many pull offs to get to view the rocky shoreline. 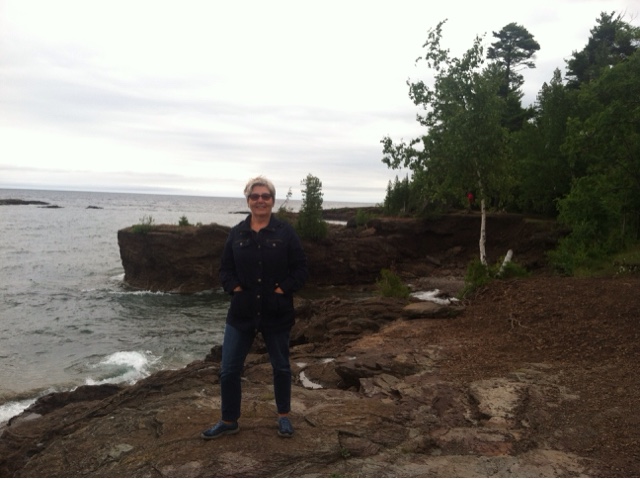 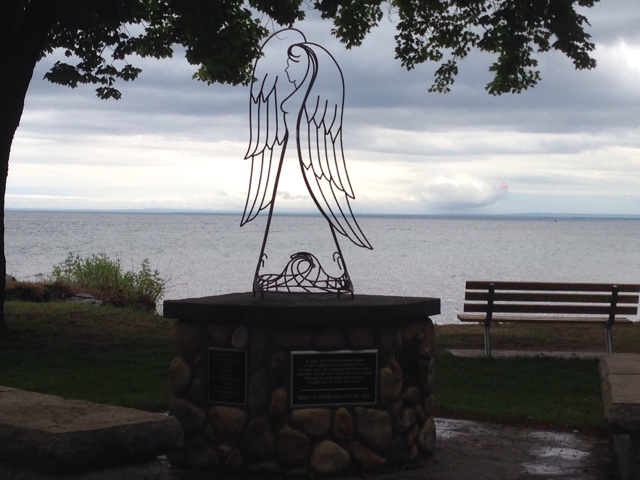 This is a memorial to all who have lost their lives in Lake Superior. 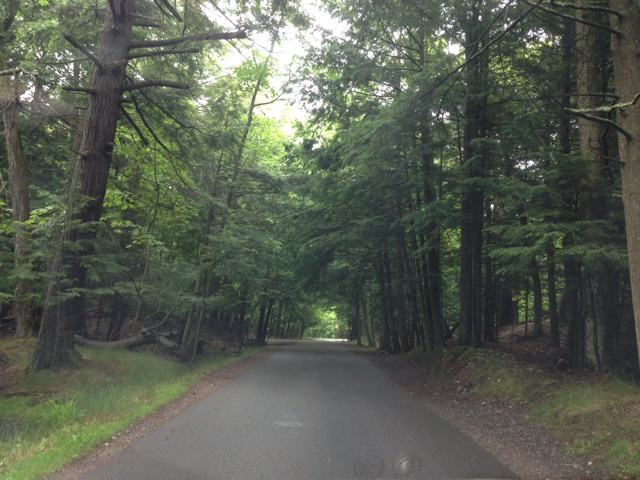 The drive through Presque Isle Park was gorgeous!
We even made a stop at Da Yoopers Tourist Trap and it lives up to its name - a tourist trap.  Mike and I attended several performance by da Yoopers - a show that was always good for lots of laughs.
Pat made chili for dinner - I couldn't have asked for anything more appropriate. I think the rain is done, but tomorrow will not warm above 62 degrees, better dig out the longjohns.
Friday, July 15.  Today started out like an January day in Arizona - chilly, like 50 something, then gradually warmed to about 62.  The 62 was unite comfortable as the sun was shining.  The drive from Ishpeming to Newberry was only a couple of hours and the only wildlife that we saw along the way was Sandhill Cranes - none of the moose or bear that we were warned of along the roadsides.
We arrived at the KOA in Newberry and were pretty disappointed when we saw our sites - nicely wooded, but all dirt, uphill to get in them, difficult to level, and the connections are on the front and not the back and also on the wrong side for one of us.  I don't think my hose would even reach, so I didn't even try, it would turn from white to brown after a one night stay.  I came real close to complaining. But decided to write it in my review instead - the place isn't cheap.
We headed out to see the Tahqamenon Falls but when we pulled in at the state park, the line of cars to get in was about 10 long, so we decided to go to the shipwreck museum in Whitefish Point first.  I was impressed with that place and learned a lot about the Great Lakes and especially, Lake Superior.  We saw a few things that were salvaged from the Edmond Fitzgerald that sunk in 1975 and a few it s that had washed up on the shoreline of several others.  It is estimated that some 500+ ships have sunk just a short distance from this point, either from extremely bad weather conditions or from visibility and crashing into other ships.  The lighthouse and buildings that were used to staff and maintain it are left in good condition and provide a pretty good picture of what life was like for those hearty souls. 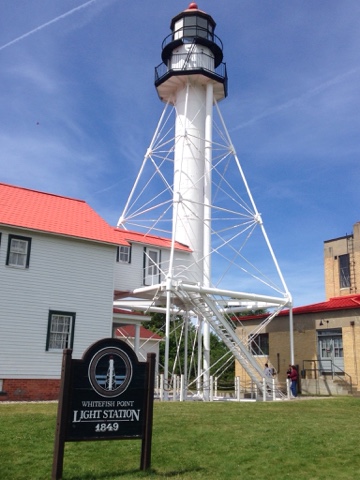 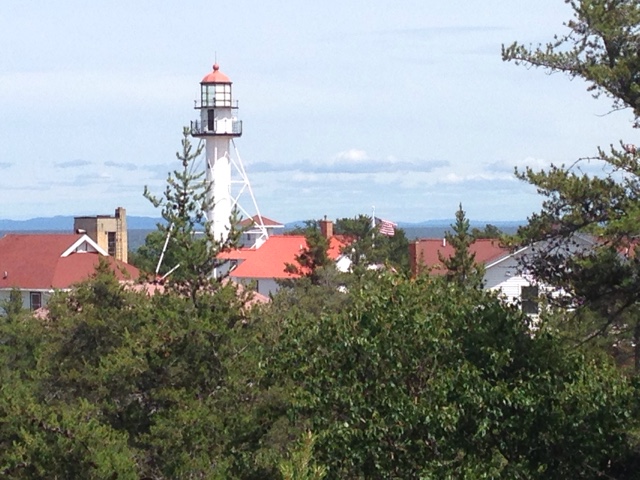 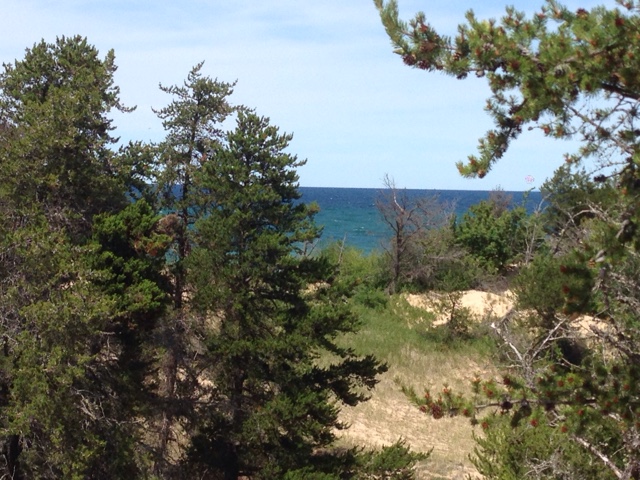 From there, we stopped at the Lower Falls at Tahquamenon State Park and walked the trail that led to the falls, then a bit farther down the road to the Upper Falls - gorgeous views and a nice, walk. 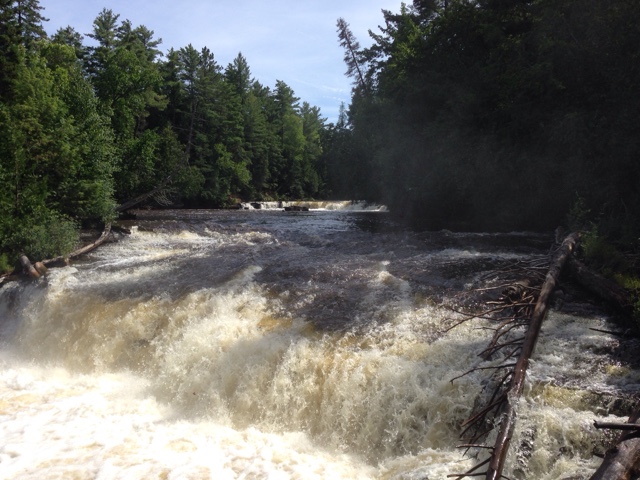 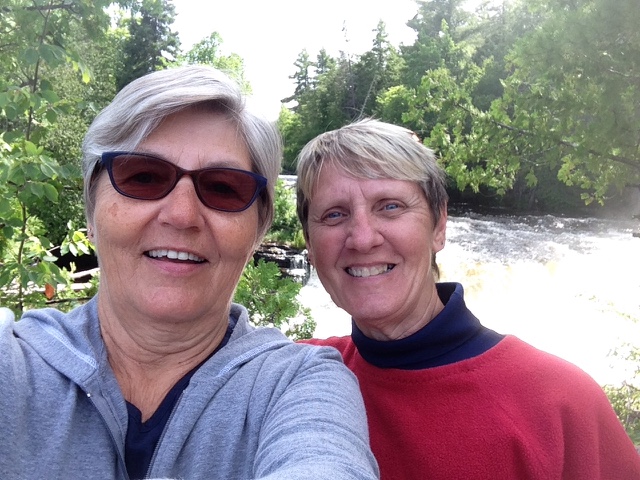 Gotta try a selfie now and then. 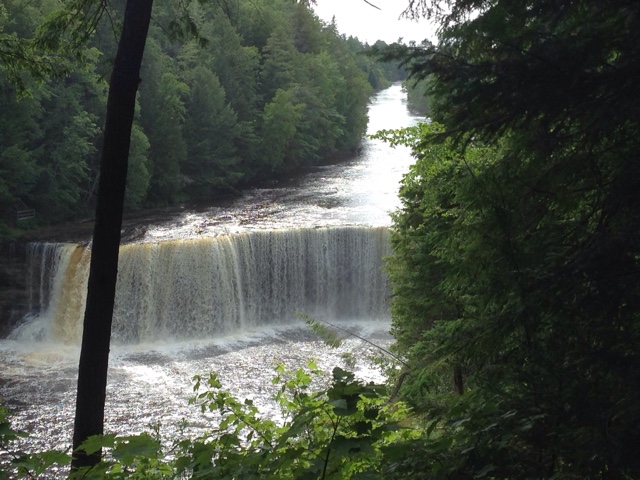 Upper Falls
It's Friday - there must be a fish fry somewhere.  We found one at the Newberry Eagles Club - I had the local whitefish and it was yummy. I can't say much for the drinks - I guess beer would have been better.  We had a nice campfire (a challenge to get it going) but very nice once it took off. Good times.
Saturday, July 16.  Our drive was pretty short, we cut south to US Hwy 2 and drove along the north shore of Lake Michigan - the shore is beachy and pretty calm, compared to what we saw yesterday on Lake Superior.  It was a beautiful drive and we quickly checked into our sites at the KOA in St. Ignace.  The sites are so strangely setup here - one electric tower is shared between 2 sites and the water/sewer are not conveniently located either.  My electric and water had to go under my trailer and the hookups are right there where I exit the camper.  I'm not even sure if my sewer hoses will reach - we shall see.  We had sites 10-11 but Roger couldn't figure out how his connections would work, so he switched sites with the guys that were coming into 12.  All worked out, they were friendly and good neighbor's - both father and son were retired fishing guides. 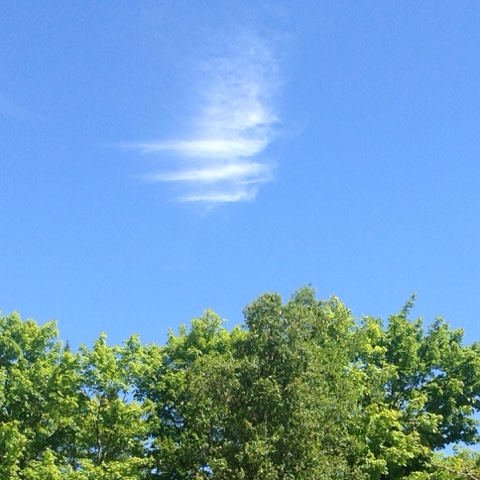 Pretty clouds in a clear, blue sky.  I thought it looked like flying Angels. 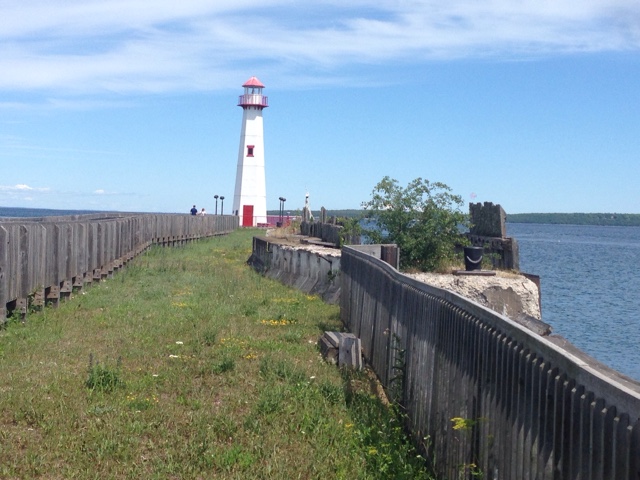 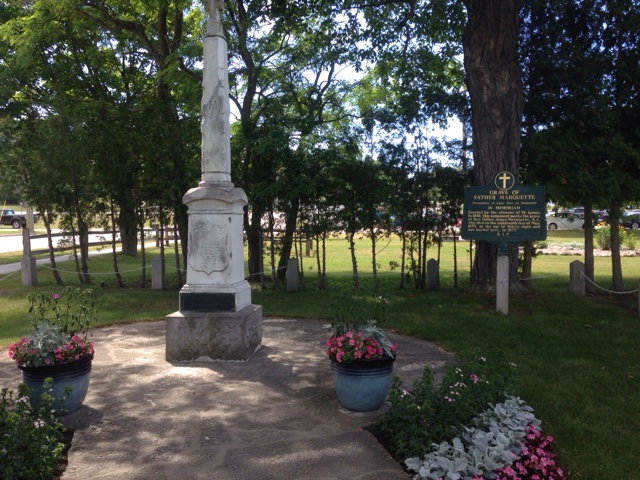 Roger stayed back with the dogs and Pat and I went into town, strolled the main drag, saw the Ojibway Museum and the final resting place of Father Marquette, the missionary who brought Christianity to the local Indian tribes, and we saw Mackinac Island and Lake Huron.  I really had no desire to go over there - from what I hear it is just a bunch of t-shirt shops and the Grand Hotel.  We saw what we wanted to see, then went back to the campsite, started a fire, then I fixed sausage and peppers for dinner.  Pat and I got silly and had a nice time.
Sunday, July 17.  I slept in until 7:30 this morning and it sure felt good.  Pat fixed breakfast and then we walked the dogs and got ready for the day, heading to Sault Ste Marie.  Rain is predicted and we plan to cross into Canada, so we left the dogs at home.
The drive was about 50 miles and we headed straight to the locks to watch boats going from Lake Huron to Lake Superior through the St. Mary's River.  It sure is interesting how that works.  Once the Federal Churchill got into the locks, some of the crew left the boat to collect their mail and laundry while the locks filled up, then they returned and the ship went through.  We then walked along the downtown streets, browsed in a couple of shops, and watched a fund-raising basketball tournament on courts that were marked off on the street.  We then crossed into Canada, walked a path in a park along the river, and hoped to get a bite to eat but there was nothing open.  We stopped at the duty free shop before crossing back into the US and stopping at a diner called Studebakers.  The strawberry rhubarb pie that I had was delicious and hit the spot.
We drove back to St. Ignace in the rain and it continued until about 7 pm.  Pat put a corned beef, potatoes and carrots in the crock pot before we left this morning and it made for a delicious dinner. 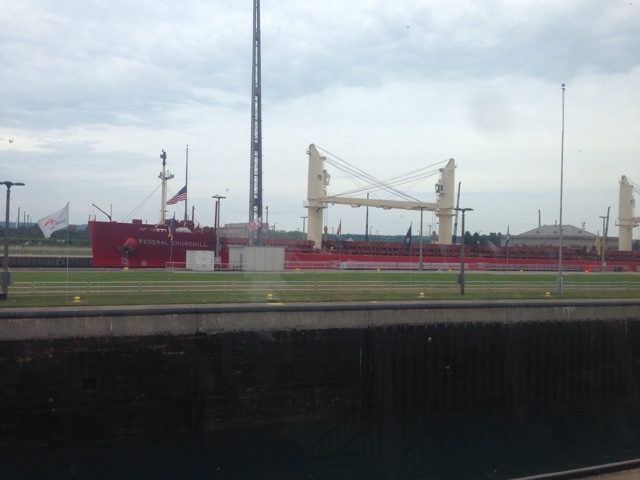 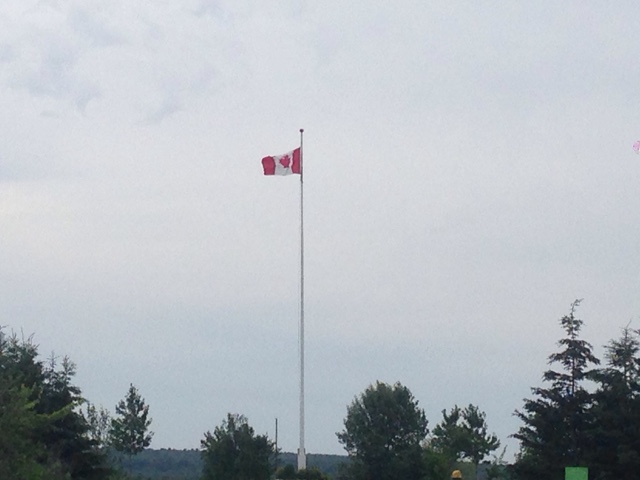 Made it to Canada 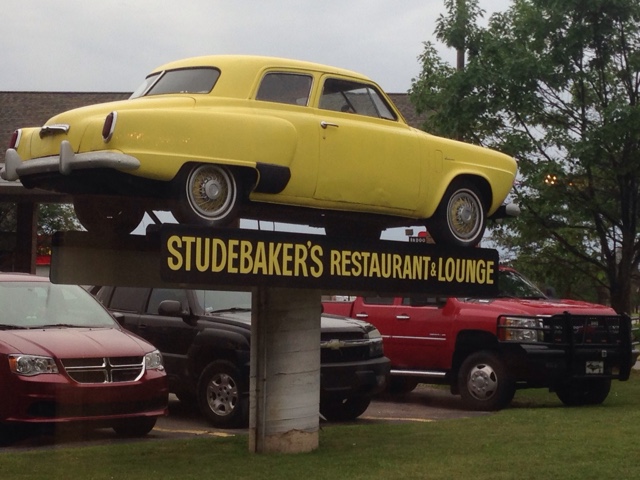 Posted by Bridge Coast to Coast Saga at 12:18 PM