Monday, August 1.  What a pleasant afternoon today.  Last week when Rene, Jonnie, Dawn and I were together, we decided to try to get some of our other cousins together, so we gathered in Middleton this afternoon for a late lunch.  Ken and Gerda, Fran, Donna, and Wanda joined us at the Craftsman brewery and we sat and talked for 3 hours.  It had been several years since Rene had seen many of them, so she was really delighted and Ken was happy that he got to be there with his harem.  All are first cousins except Dawn and Wanda (Wanda was married to my cousin Dick and Dawn is her daughter).  It was a truly enjoyable time, so glad it all worked out. 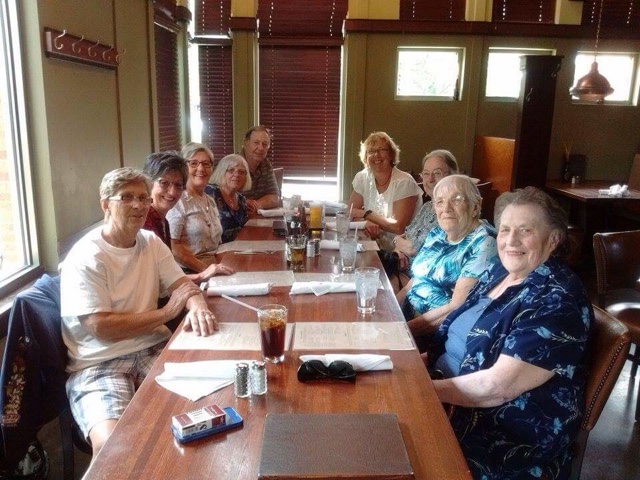 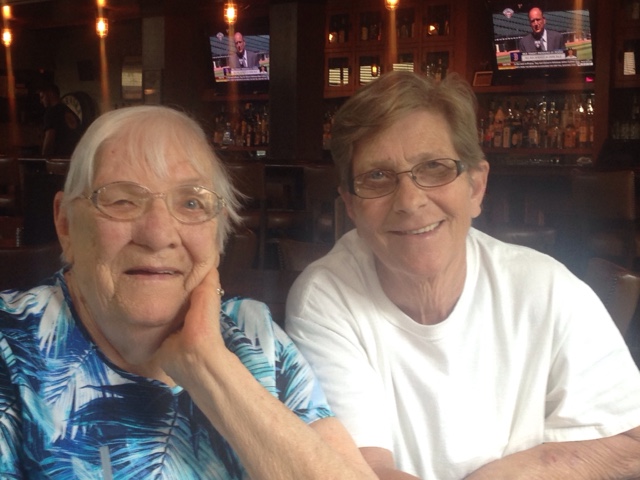 Fran and Jonnie, the only survivors (oldest and youngest) of the Muetz family. 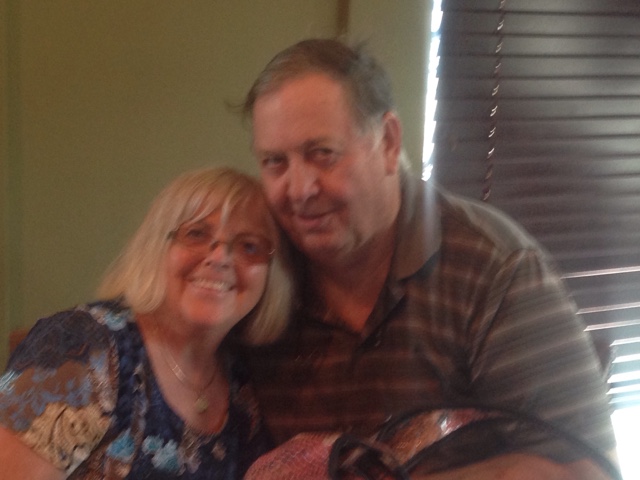 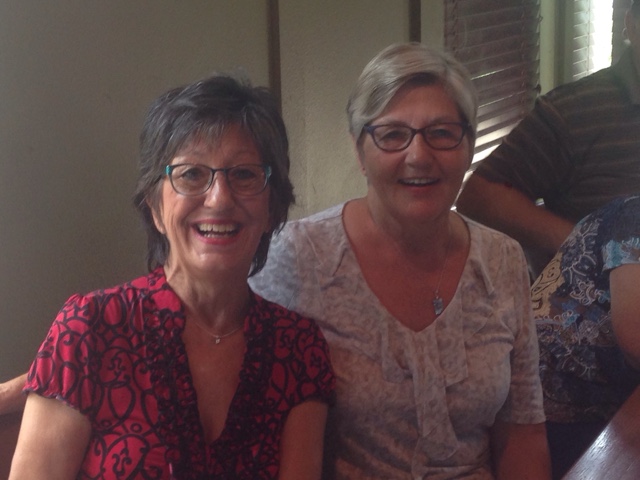 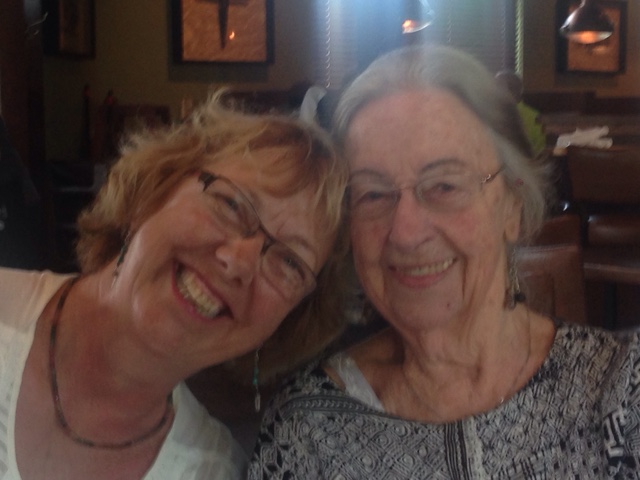 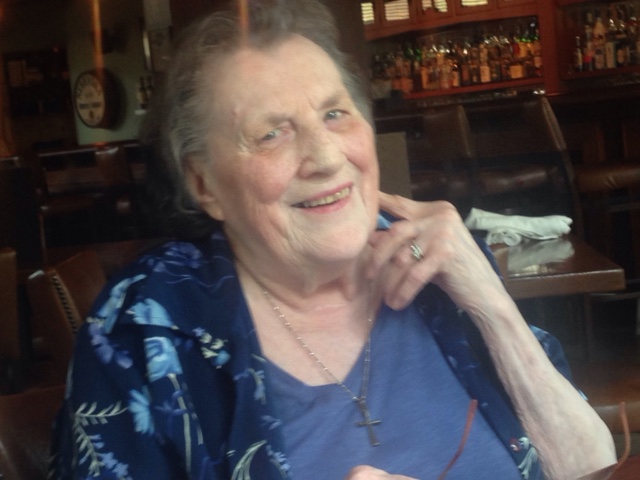 Wanda
Thursday, August 4.  In some ways, it has been a busy week.  On Tuesday and Wednesday, Pat and I canned 15 pints of salsa.  I walked - feeling better about going out by myself again. That attack set me back and instilled fear in me, but I'm much more aware of my surroundings and I've been carrying pepper spray along with me (thanks, Tracey).  I can't believe how many dogs I see off leash or on leash but not under the owners control.  I was given the last of the vet bill money from the person whose dog attacked Frisco.  I also shopped for birthday gifts for my granddaughters. 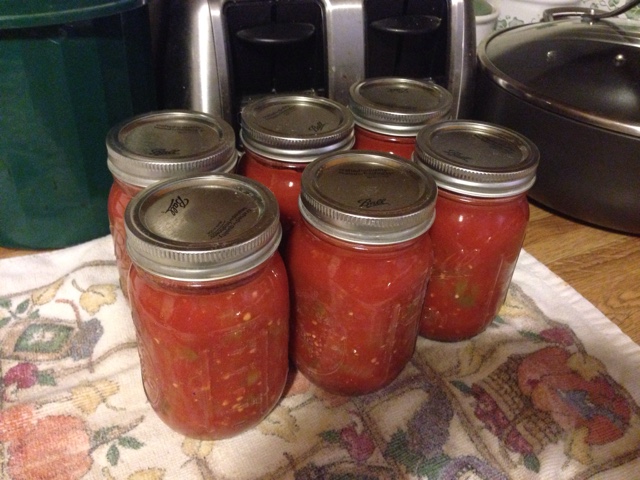 In other ways, it has been a lazy week - taking naps and lounging around, even watching a movie in the middle of the day.  The humidity has been high again and it sure seems to drain the energy right out of you and makes you want to stay inside in the AC.  It also took a while to recover from last week's 3 nights out in a row, I am out of shape on that front.
Tonight, Dawn and I met Chris and Norm at Country Corners to hear Frank and Bob playing old time country music.  Pat and Roger were going to join us but didn't make it. Mike and I were regulars there for many years and were loyal followers of the house band.  Their song selection and sound is just as it was back in the nineties.
Friday, August 5.  Happy Birthday to my dear friend, Pat. You are now as old as I am. We celebrated at Naugti-gal with her son AJ and several of her in-laws whom I have come to know through the years.  It was an enjoyable evening of conversation, food, and drink.  The place has gone to the dumps as far as service and cocktails are concerned.  I was looking forward to having an Old Fashioned, but what I got was a poor excuse for it.  Several others complained about their weak and watered-down drinks. Our dinner order was messed up and one person didn't get his meal until several of us were finished eating.  And then, they rushed us away from our table so they could accommodate the next group that was waiting for a table.  Because of that, 4 of the 11 of us got free drinks - strange.  Why only 4?  I wouldn't have taken another drink if offered, since I had heard on the news that they were having OWI checkpoints in Stoughton and Oregon tonight and I'm not willing to take a chance on getting busted for that.
AJ brought sweet corn from his Dad's farm to share with all of us and I came home with a couple dozen ears of some of the best corn around.  Yummy dinner tomorrow night.
Saturday, August 6.  Pat and I drove out to Verona this morning so he could get the lay of the land and know where to report to his job site on Monday.  He will be working at Epic, a huge corporation that employs more than 9,000 people. Pat will be working on the fifth phase of expansion where five new buildings are going up.  It is a healthcare software company that provides compute systems to doctors, hospitals and clinics for about 60% of that market.  A huge campus with unique building structures, the size of a small town.  It was pretty amazing to see after hearing people talking about it for years. 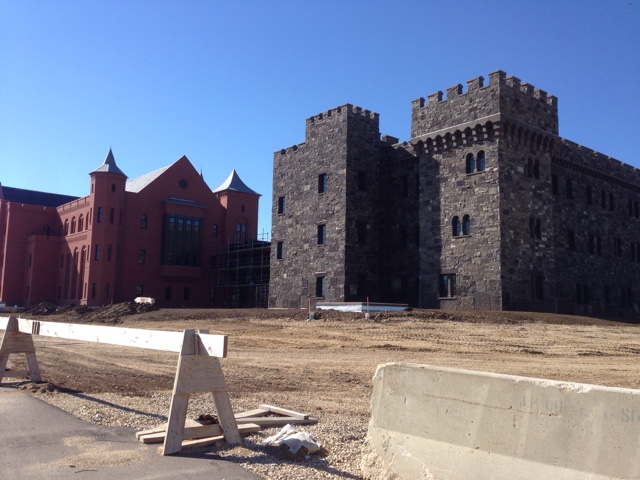 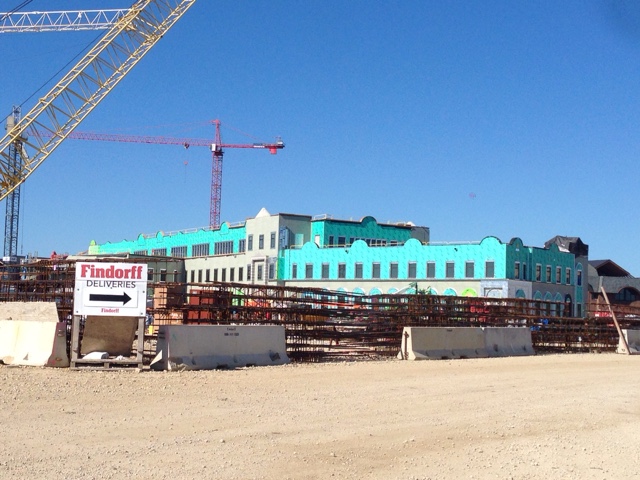 Pat's job site, they do the exterior plaster portion.
When we got back home, he, Tracey, and I walked to the new Norwegian Heritage Center, Livreise (Life's Journey) in downtown Stoughton.  It is a beautiful building honoring the history and experience of the immigrants that settled in this area.  The exhibits are nicely displayed and there are several multi-media displays, cultural stations, and digital story books about personal experiences.  A very nice contribution to the city.
Sunday, August 7.  The only plan that I had for today was to blanch and cook the remaining sweet corn that we got from AJ and then I got a text from Leslie asking if I wanted to meet her for lunch somewhere between Stoughton and West Allis.  It took seconds to reply and we came up with a plan to meet at Hering's Sand Bar on Rock Lake in Lake Mills.  It is a rather dumpy old bar but the patio is great - on the beach, surrounded by the city park with lots of activity going on.  The boat landing had vehicles lined up and ready to launch or bring in boats or jet skies, the beach was full of families and kids, folks arriving on bicycles, and we sat in the shade of a big oak tree and took it all in. 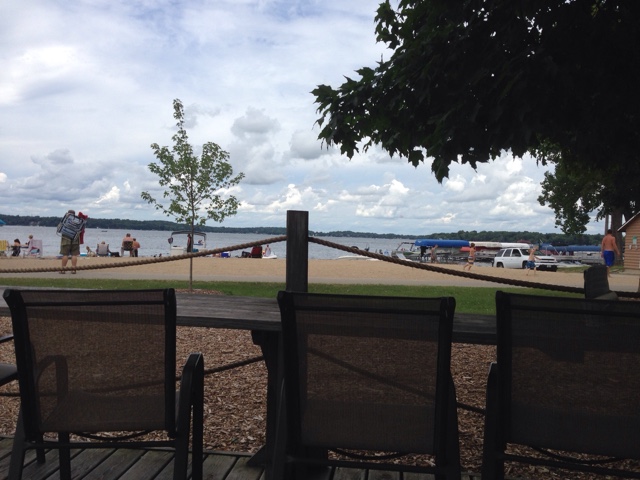 On my way back home, along the scenic county roads of southern Wisconsin, I came through the small village of Utica.  The village swelled with folks attending the annual Utica fest that consists of a craft fair, tractor pull and most important around here, the beer tent.  Cars were lined up on both sides of the road for a mile before and after the fairgrounds.  I was just fine with passing through - the dust was flying and the music blaring.
Tracey made pizzas for dinner tonight - an assortment of 4 different toppings from meaty to veggie - delicious!
Posted by Bridge Coast to Coast Saga at 7:27 AM