Thursday, September 15.  When my first journal update is written on a Thursday, it is an indication of how my week has gone.  Ben left for SF on Tuesday, leaving Jill and I to run the show.  Any window of time without kids has been used to shop, prepare for meals, do minor clean ups and take a nap whenever I can.  That is probably what I should be doing right now.  Twice, I have had to wake the twins up after only an hour's nap, in order to get Charlotte after school (Jill had a couple of days that she couldn't do the afternoon pickup.
Yesterday, my first time driving Jill's car to pickup Norah and Camille, I couldn't get her car to start - I have no experience with a car that has keyless starting. I had to call Ben at work to learn how to get it started.  Then, in the scramble to get lunch bags, sweaters, dirty clothes, and 2 3-year olds to the parked car, I managed to drop the bag of dirty clothes, losing Camille's shoes and clothes.
Then in the afternoon while they were napping, I was out back watering the lawn when I heard a squeal, turned around and found the dogs chasing a chipmunk. I aimed the hose on them and they came away, leaving an injured chipmunk struggling as he hid in the corner of the patio.  I got the dogs in the house and observed the little guy for a while and it appeared that it was dying, staying in one place and twitching now and then.  I knew I should probably put it out of its misery, but I just didn't have the heart to kill it, choosing to let it die on its own instead.  I checked periodically and every time, it moved just a bit.  After an hour or so, I checked and didn't see any movement, so I went to the garage and got a shovel to dispose of it. When I scooped underneath, the thing ran, trying to get away from me. Fortunately, it ran off the patio and behind the fence - good thing, since I didn't want the kids to see it. I check a couple of times and each time, it had moved several feet - maybe it was going to be ok.  The last I checked, it was gone. I have no idea where, but I couldn't find it anywhere. I hope it didn't suffer too much longer, or died quickly.
I made an apple crunch for a special treat for after dinner on Tuesday but there was so much yelling, pushing and completely uncooperative kids, that the privilege was taken away
We have a pot luck for Norah and Camille's school tonight, so I made a cornbread this morning.  It looked beautiful coming out of the oven but as I tipped it out of the pan, it broke apart.  This is the result 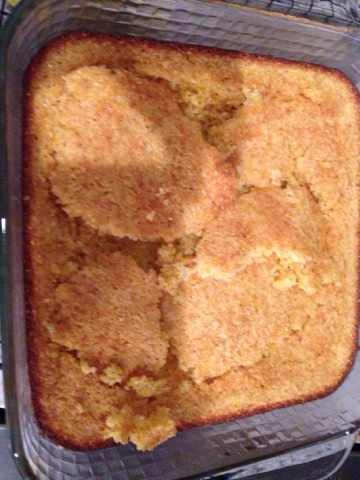 Dang, we won't be taking that to any potluck.
Jill sent me a quick salsa recipe and I pulled that together. I also got groceries for my camping trip with Charlotte this weekend,  Whew!  Resting now.
Sunday, Sptember 18.  What a great weekend I had, camping with Charlotte again.  This time, we went to Lebanon Hills Campground, only a 20-minute drive from here.  We got setup, then went on a walkabout to check out the park.  We were camped in the west loop, an area for RVs that had full hookup sites. We walked up to the East Loop, where the playground is and found those sites to be more desirable for the next time - the drawback is that they are electric only sites, so I would have to fill up with water and empty tanks at the dump station, but it would be very doable.  Those sites are bigger and more secluded, with trees surrounding each site. Another plus is that the playground is right in the middle of the loop. 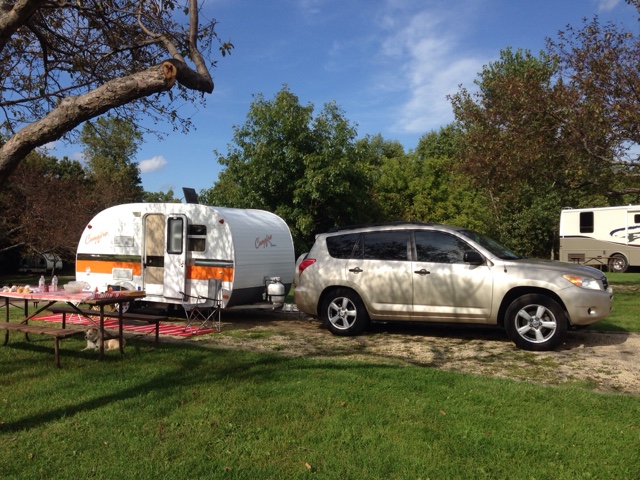 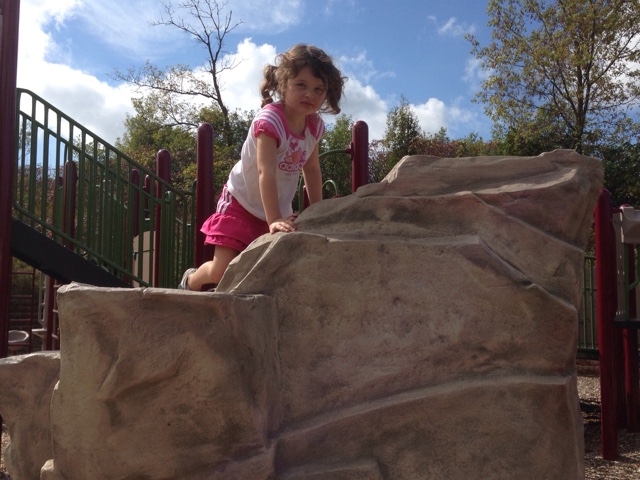 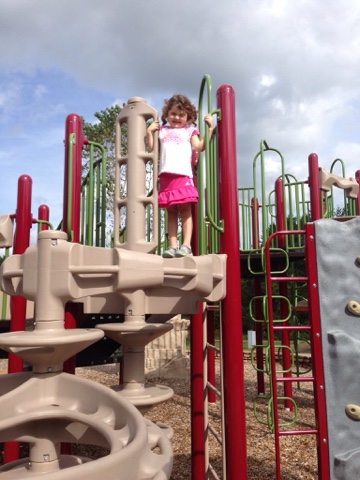 We headed back home, and saw a family pull into one of the sites across the street. Charlotte wanted to see if the little girl could play, so Eliza joined us and they got to know each other and had a great time together; coloring, running around and playing with some of Charlotte's toys.
We had shrimp, rice, and edamame for dinner and then a special treat of an ice cream cone from the store.  By then, it was time to get a fire started and we sat and sang campfire songs and enjoyed the fire until it started to rain.  We were hoping to see the full Harvest Moon tonight but there were way too many clouds covering it up.  We scurried off to bed and had a fun tickle and giggle fest until she wore out and we both went to sleep. 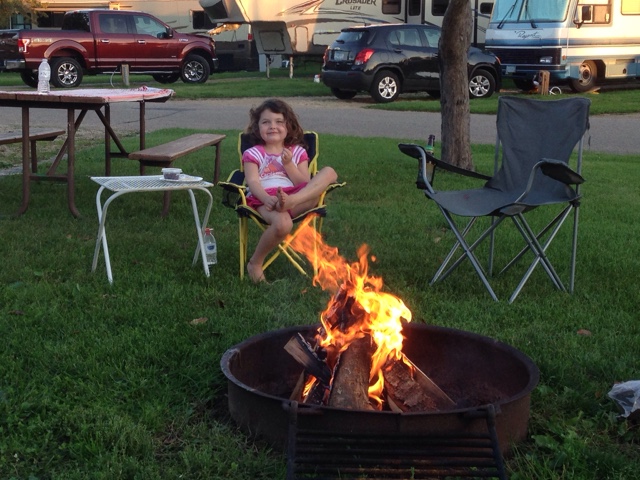 We got right to it on Saturday morning with chats with the neighbors, Julie and Lisa and thier German Shepherd, Bago (who we learned is the same age as Charlotte, born 3 days later than her).  The dog was so smart and well behaved, loved little kids and Charlotte  loved him too, asking frequently if she could go over there to pet him.   Also, we got new neighbors on the other side of us and she had to meet that little black poodle named Molly.  Molly survived an attack by her mother when she was just a puppy and her face was deformed and crooked, but she was still a real "cutie", Charlotte's description of her. 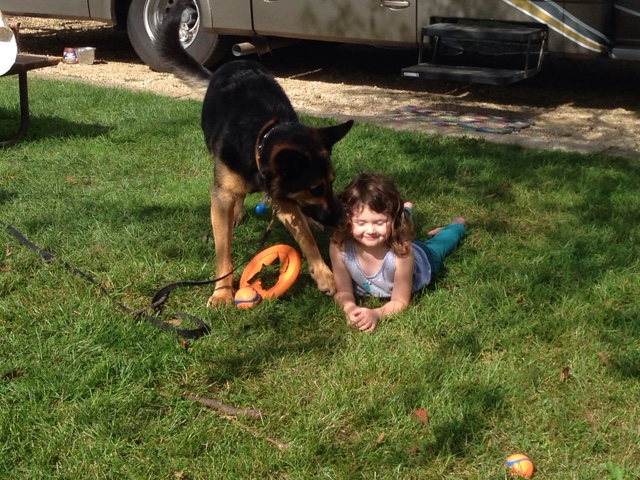 Bago stole a kiss from her, just as she was posing for the photo.
Once things tried out a bit, we went back to the playground for a while and when we got back to the camper, Eliza joined us again in the afternoon and they played for a couple of hours, coloring, practicing leaps, Eliza teaching Charlotte how to do cartwheels, rolling down the hill, eating, and playing with toys. 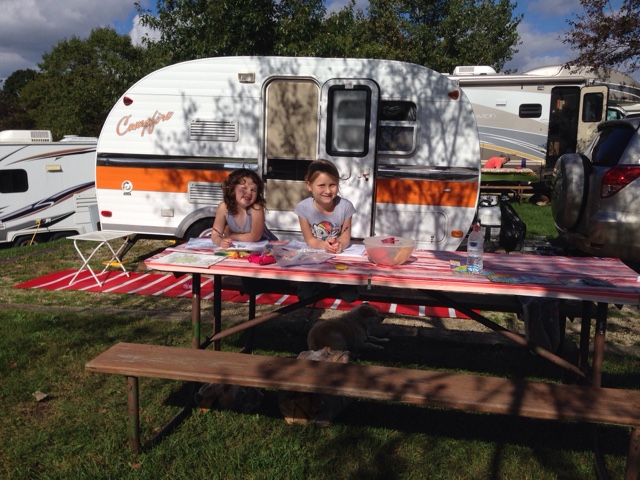 After dinner, we went for a hike along a forest path that wine along the lake shore.   Unfortunately, a large section of the path was flooded from the recent rains, so we couldn't go all around the lake, having to turn around and take the same path.
She got bored of the campfire and we went inside about 8:30, never did get to see the full moon until just before she went to sleep, and we saw it through the window.  I suggested that we go outside in our pjs to get a good look, but she was too sleepy by that time.
I had a miserable night of sleep, waking up to the sound of coyotes around midnight and then not going back to sleep until after 3 am, and when I did sleep, it was that kind of sleep that is right on the edge of awake and asleep. Charlotte sleep in until 8:00.
She was ready to go see Bago and go for a morning walk so we had a quick bowl of cereal and headed down a different woodland path, this time around another lake and it was so quiet and peaceful. When we got back to the campsite, I made eggs in a hole for breakfast and we packed up and got ready to leave. 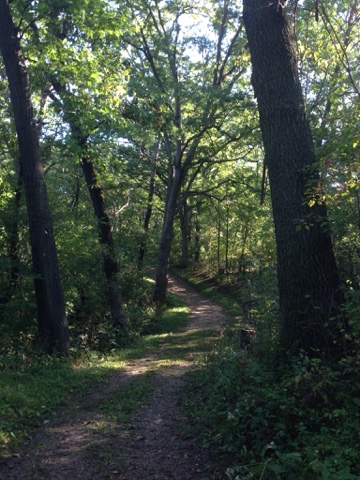 We ended our weekend with a stop for pizza. 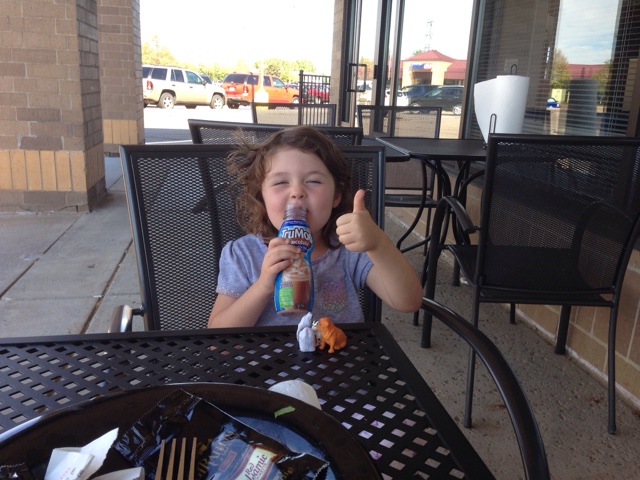 Posted by Bridge Coast to Coast Saga at 10:05 AM