Tuesday, February 21.  After getting up at 4:30 am and getting Leslie off to the airport, I stopped for gas and a few groceries before heading home to get loaded up to go camping for the next 3 days with Tom. No other friends were available to go camping this week and it was a week of no cleaning jobs for me, so I was going regardless.  We headed out around 11:30 and were set up by 1:30 at Picacho Peak State Park.  What a beautiful place this is.  My site has a beautiful view of the Peak itself, to the south and then another mountain range to the north. 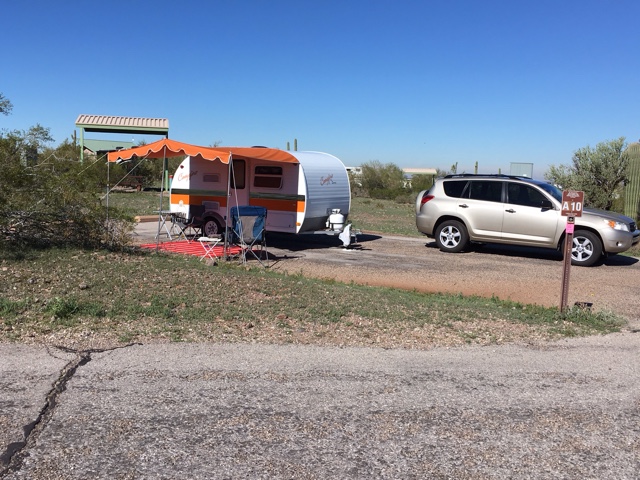 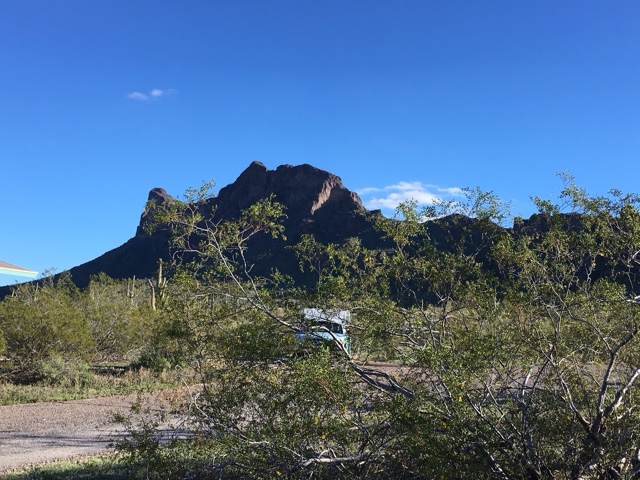 Tom fixed dinner the first night and I leaked out and went back to my camper shortly after dinner.  It was a long day for me.
Today, we took a hike down to the visitor center, about a mile away from the campground and then out to see some memorials from a battle that was fought here during the civil war - imagine that.  There were actually several skirmishes that took place nearby.  The east-west route through here was established by Juan Batista deAnza from Mexico to San Francisco, and was used as a mail delivery route by the Butterfield Overland Mail Trail.  We then hiked up to the lookout point on the Calloway Trail - the lookout is over the freeway and the mountains off in the distance.  There were actually better views along the trail.  The ground is covered with Mexican Poppies and Lupine - gorgeous! 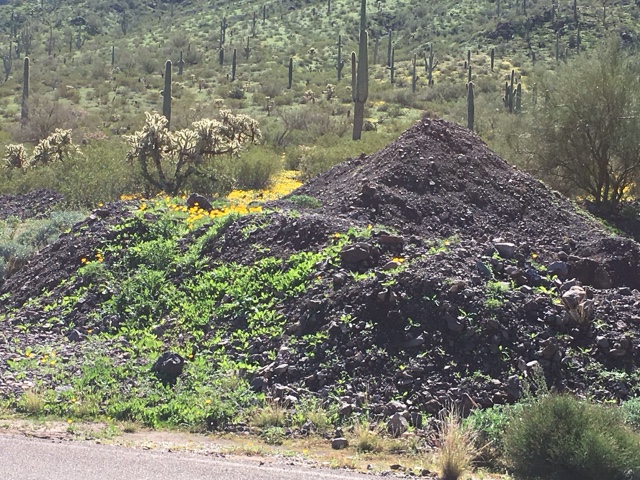 A river of Mexican Poppy 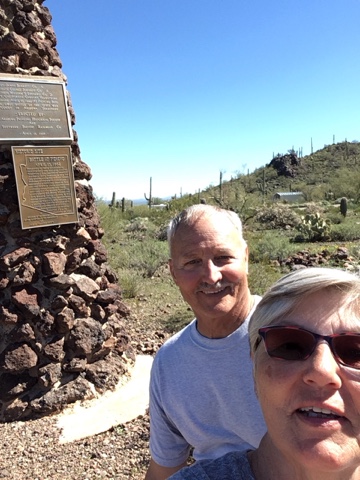 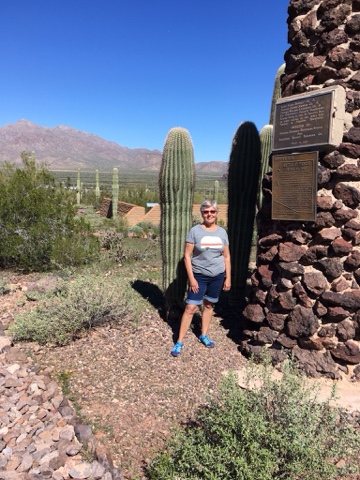 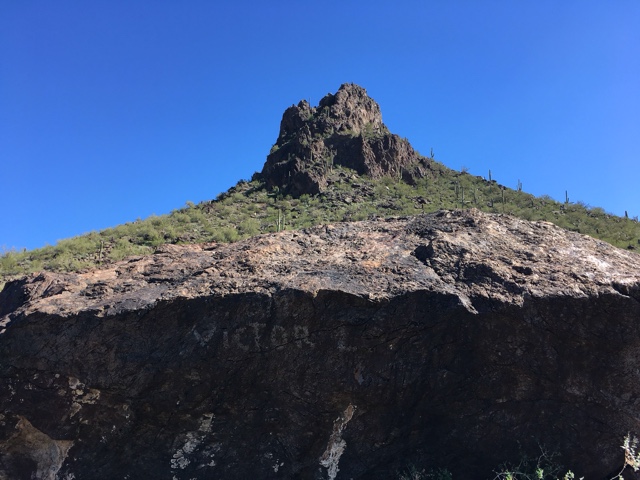 Damn that Victor - it could be 100 year old graffiti - who knows?
I made dinner tonight - told Tom to come over around 5:15 and when he wasn't here at 5:45 - I ate by  myself and then he texted me that that he had fallen asleep and didn't wake up in time for dinner - too bad, cold food for him.  We sat around a campfire and watched the stars and the lights from I-10 off in the distance. The stars were incredible.
Wednesday, February 22.  Today's plan was to drive to the west parking lot and get on the Sunset Trail that goes along the south side of the mountains that we are facing, connects with the Hunter Trail that crosses over the saddle and back down the north side.  After 2.6 miles of trekking over mostly level Trail but some rough spots, we made it to the base but were both feeling like we wouldn't make it - especially since it is rated difficult and was a steep enough climb that they have cables installed to help you stay stable and on the trail.  The Peak is about 3,200 feet in elevation.  So back down we trekked and I was very glad to see the car and ready to get my hiking boots off my tired feet.  We were both glad that our our old people bodies let us do what we did, a 5-mile trek through the desert. 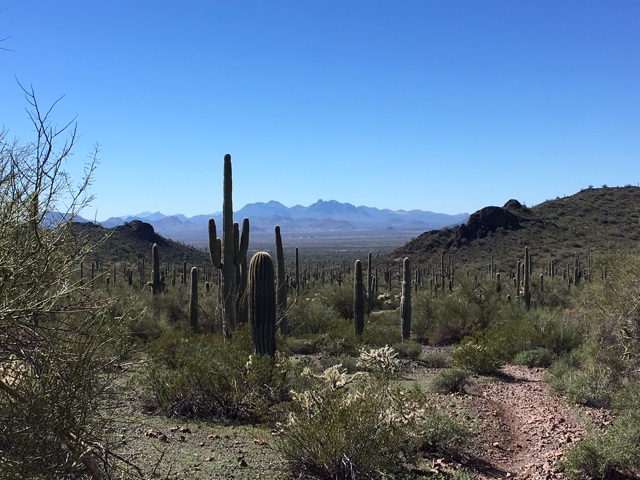 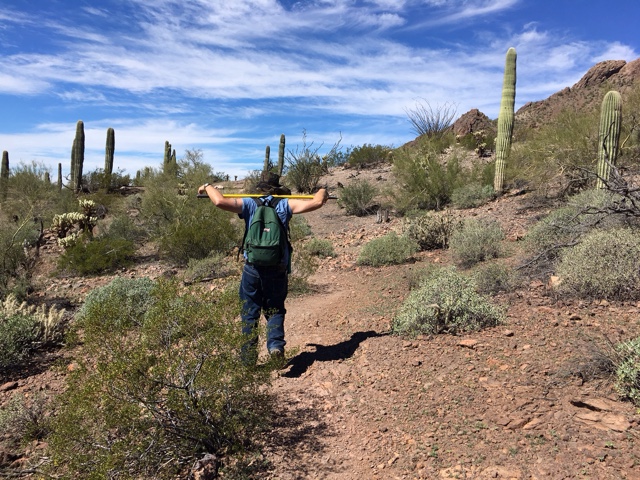 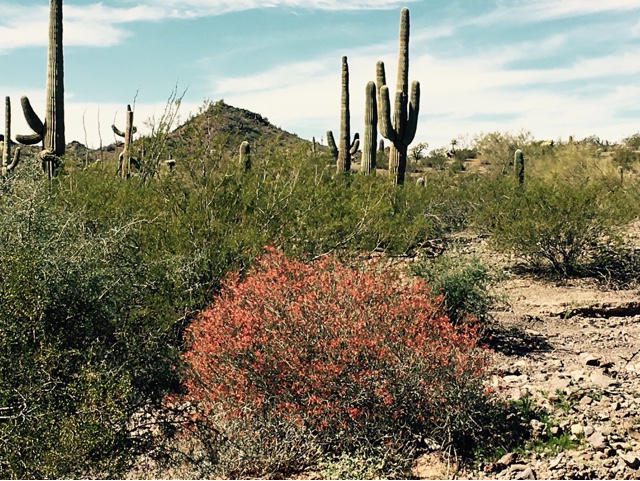 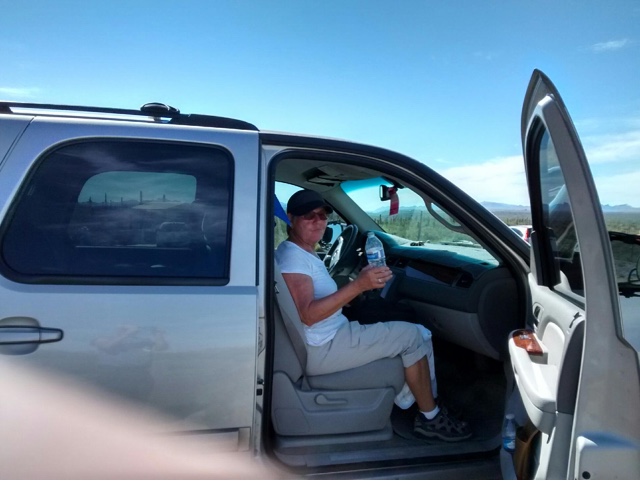 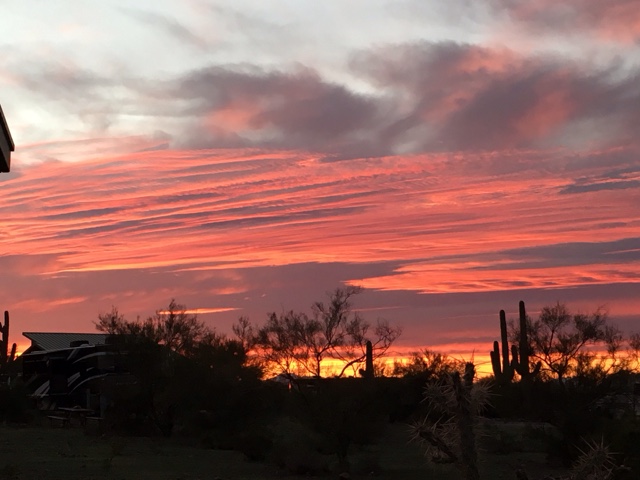 A perfect end to a very nice day!
Thursday, February 22.  A front moved in during the night and the wind had the awning flopping around like crazy - it woke me up a few times but when I looked out the window it seemed like it was anchored down ok and wouldn't go anywhere, so I just went back to sleep. And sleep I did until 6:30 this morning.  It was nippy when I took Frisco for his walk.
Tom and I hooked up around 9:00 and went to explore this road we had discovered that headed north from the C Loop of the campground and led in the direction of the huge black hill that we could see from our campsites, occasionally there would be a person perched up on top of it.  As we got closer to the hill, I spotted a hole in the rock, so we headed in that direction and were able to climb up pretty close to it - at least Tom got pretty close to it but not close enough to stick his head through the hole. 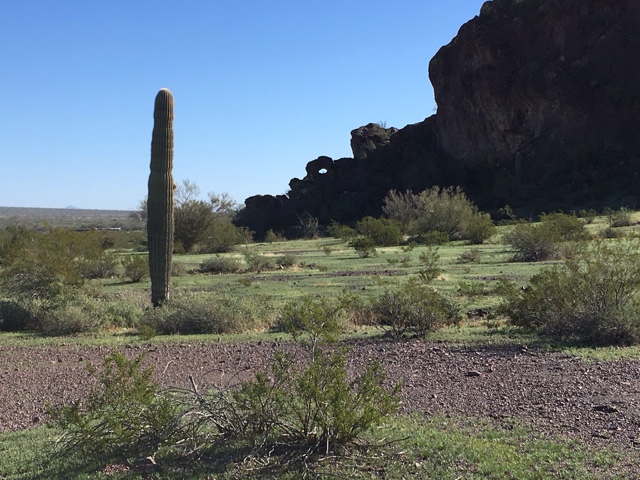 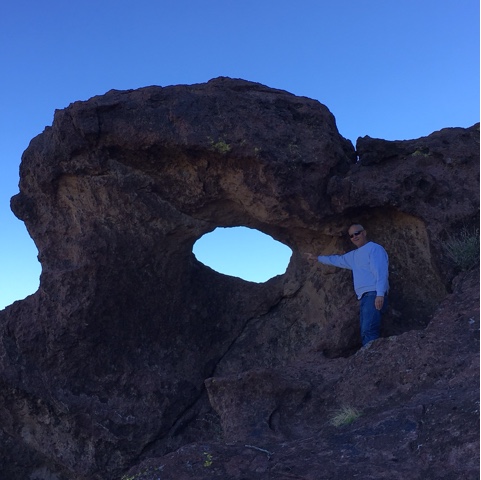 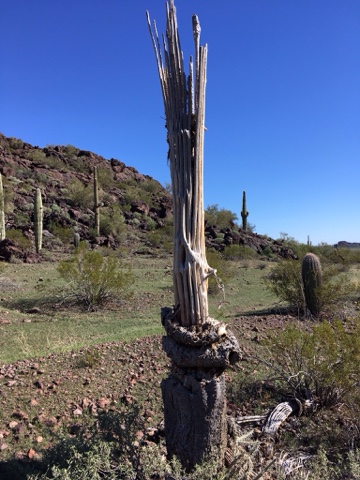 As we walked along the base of the hill, we came to 2 other holes in the rocks but didn't try to get any closer.  We came upon a fence and crawled under it in a couple of places so we could keep going around the hill and back to our campsites - all in all, it was a 2-mile trek on mostly flat ground.
Then I had to pack up and leave. I got home, unpacked the trailer, parked it in the storage lot, took a shower, and headed for Connie's house where Jan, Jim, and Shirley picked us up to go to Casa Ramos for happy hour and a yummy chicken fajita dinner with about 30 other friends from Brentwood.  Good times! 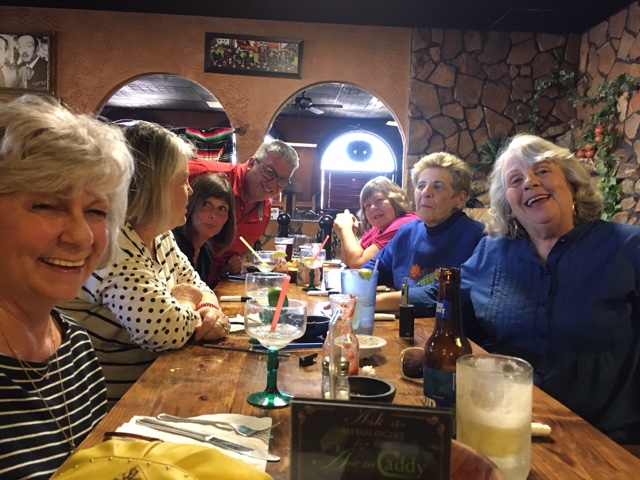 Saturday, February 25. Pat got us tickets to the Lost Dutchman Days Rodeo in Apache Junction yesterday and none of us dressed for the occasion.  62 degrees feels pretty nice in the sunshine, but it was cold sitting on those metal bleachers in the shade with a cold breeze coming on your back.  About half way through, we went to the far western edge of the bleachers where it was slightly warmer, as long as you had someone sitting behind you.  The Rodeo was entertaining with the standard events; bull riding, Bronc riding, saddle bronc, calf roping, ladie's synchronized riding and barrel racing.  The clown was quite entertaining and there was a 40-time champion gun slinger, whip cracker, and lasso thrower.  All in all a good time.  We stopped at the Dog Run Saloon for dinner and had a very good fish fry.
When I got back home, I was afraid to sit down and relax or I would never get up again - then headed to the clubhouse for an evening of karaoke.  There were a bunch of folks who follow the DJ around so they did most of the (pretty bad) singing. At the end of the night, our President, Dave, told him not to come back again, since he never worked our people into the lineup so they could have a chance to sing.
And then I couldn't sleep - not asleep at midnight, not asleep at 2 am, asleep some time between 2 and 5 am when I woke up, tossed and turned until 7. I hate it when that happens.
I was on the phone for a while this morning talking with Rita and Pat. I helped Arlene, as her phone, tv, and wifi were all out.  After 2 separate calls to Cox and we were told that there was an outage in the area, they agreed to send a technician out to check her system tomorrow.  I did manage to tidy up all of the cables and cords that were looking like a bunch of spaghetti.
Sunday, February 26.  Ben and Jill went to see an apartment for me in Minneapolis today, the result of an inquiry that Jill made on NextDoor.  She took lots of pictures and gave me a very detailed description over the phone and I decided to jump on it.  It is a 900 sf 1-bedroom basement apartment (well lit because of egress windows) in Linden Hills, about 5-minutes from their house.  I'm excited now!  The homeowner, a single woman sounded very nice and we agreed to a 3-month lease followed by a month-to-month lease with a 30-day notice when a senior apartment opens up for me.  The total rent and all utilities are included and the cost turns out to be about $120 less than my current cost of living,  so a little saving there. 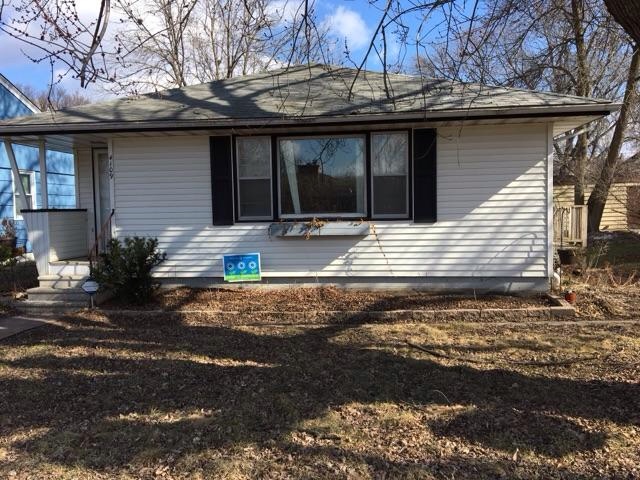 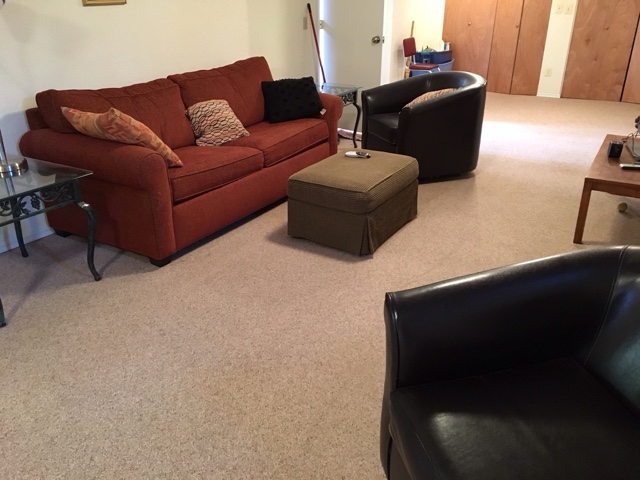 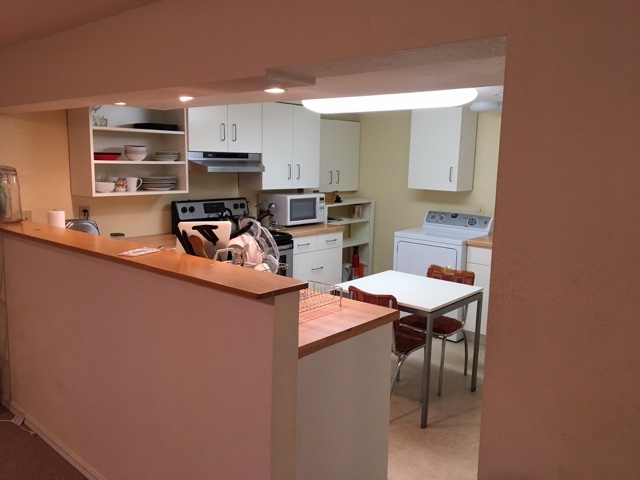 Posted by Bridge Coast to Coast Saga at 3:26 PM