On Saturday morning, with Gypsy in tow, I headed south to Richland Center, traveling along the Mississippi River on US 61.  The worst part was getting through LaCrosse and it's many stop lights through the city. From there, it was the beautiful terrain through the driftless area of Wisconsin and its many bluffs, lush green foliage, and views of the river.  I pulled into “The Land” about 5 hours after departing. 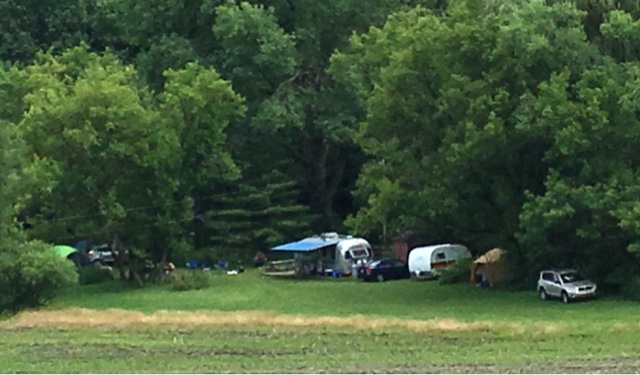 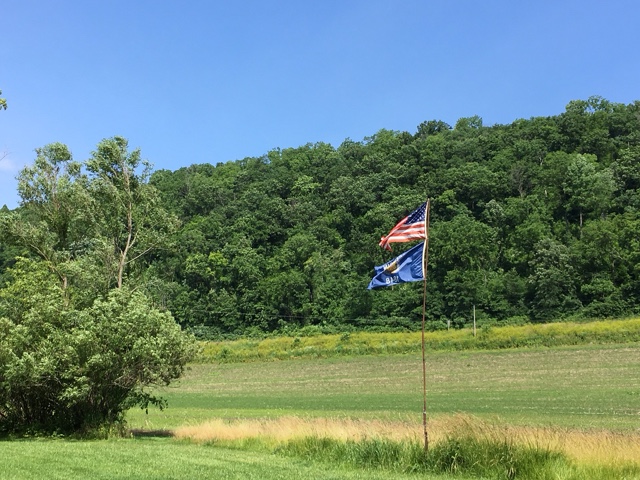 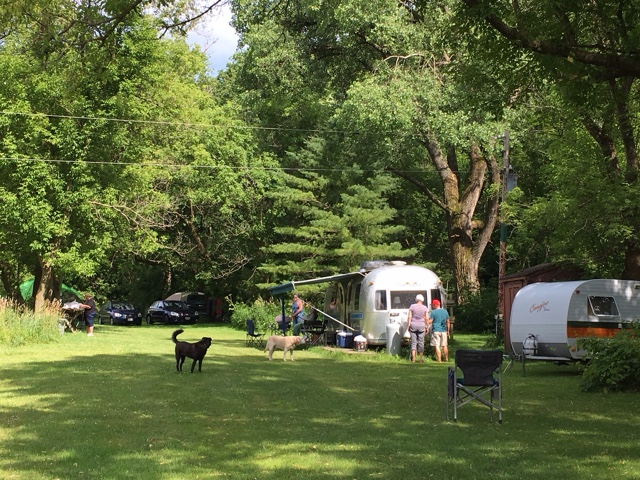 It was great to see Leslie, Chris, Steve and Nancy and a shortly after that, Jane showed up.  Chris left on Sunday and Linda took her place. I got the camper set up and it was Beer Thirty and a good old Supper Club satisfied my thirst.  Jane grilled this huge pork roast that was stuffed with some pear chutney that she made for dinner and we had green beans, and sweet and white potatoes to accompany it.  Good stuff!

The sky was clear and the moon and stars were bright - and there was no rain in the forecast for the next 3 days.  I remember few weekends out there without rain and many with rain the entire weekend - and that is no fun at all.

Steve and I hiked the 180 acres and I really enjoyed it, again, it's probably been 5 years since I last hiked it with Peter.  The first mile is mostly a wide path cut through the woods, passing a few groomed campsites.  As you get to the western border of the property, you start to climb the ridge and again and the ground gets much more rocky with less grass and more pine trees and hardwoods and a few campsites that were used in our younger days.  On the back side, you cross over into the neighbor's soybean field where it is an easy walk to the edge of the woods where you start to go down toward the campsites again - the most difficult part of the hike, where you move from tree to tree for support on the steep decline.  At one point, I couldn't find Frisco, so we stayed in the same place and just kept calling for him and he eventually showed up.  He must have been having trouble getting over fallen trees and branches and he was getting tired.  We all made it and I felt a great sense of accomplishment.  It felt good just to hike and it doesn't get much better than this beautiful place. 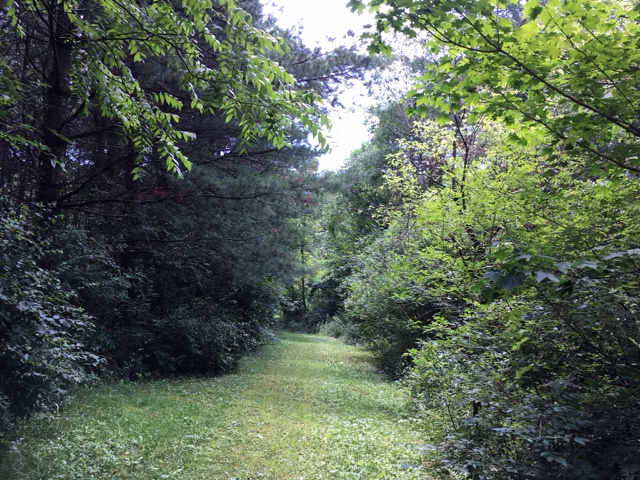 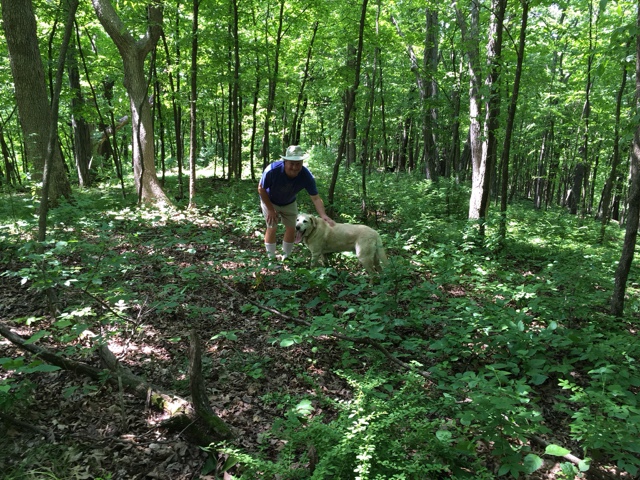 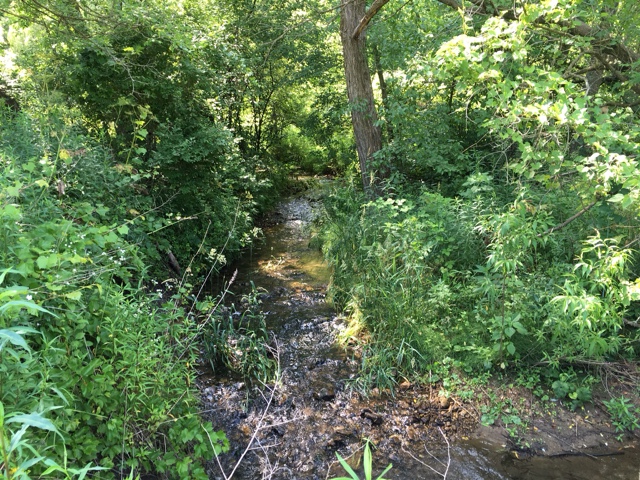 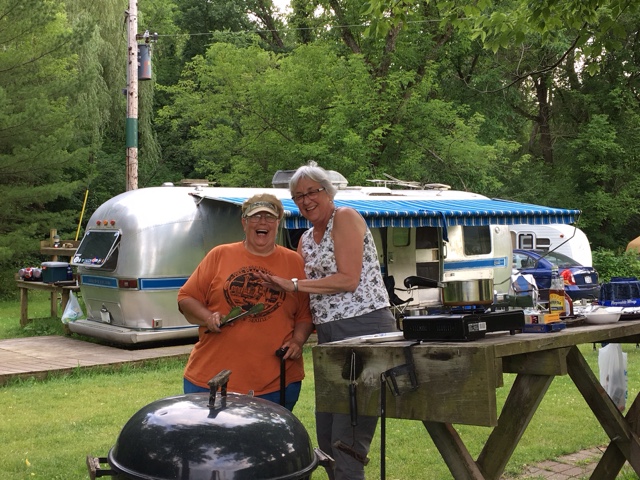 While I was relaxing with a cup of coffee this morning, Frisco came up to me and I could hardly stand the smell of him. For the 2nd time this weekend, he had rolled in something dead, excrement, or just something gross and his neck and side was covered in black, smelly, gunk.  Thanks to the stream and my bar of lavender soap, I got him cleaned up and could stand to have him near me again.

Yesterday afternoon when Linda came back from town, she left her keys in the ignition on the accessory position and when she went to roll up her windows in the evening, found her battery dead.  So, after cleaning Frisco up and before hooking Gypsy back up, we read our car manuals and then tried to jump start her car - but it didn't work - after telling Pat about it this evening, he thought that we probably didn't let it charge quite long enough.  She ended up calling AAA and they got her on the road so she could get back to Milwaukee this afternoon.

And now I'm back in Stoughton for a few days.  It's always good to be with Pat and Tracey and Savana and her girlfriend will be with us tonight.

Wednesday, July 5.  I'm feeling right at home again with Gypsy parked in Pat and Tracey’s driveway. Had to run the AC as it is hot and humid.  Savana and her girlfriend are spending the night and it was nice to get to see her again and meet Erica. Tracey made beans and rice for dinner and that was pretty tasty.

I gave Gypsy a bath this morning and Pat did all of the roof cleaning so I didn't even have to get on the ladder.  It is really dimpled up there but no leaks.  I heard from the 2 repair shops last week and they can't locate the material for the roof. The manufacturer won't return their calls and that didn't surprise me in the least. They quit making them back in 2010.  So today, I sent some more photos and will see what the insurance adjusters have to say.

I went for a ride with Pat to Madison as he had to go look at a repair job on the east side. It gave us a perfect opportunity to drive around the neighborhood where we lived when he was growing up and then we took the back country roads back to Stoughton.  It brought back lots of memories. 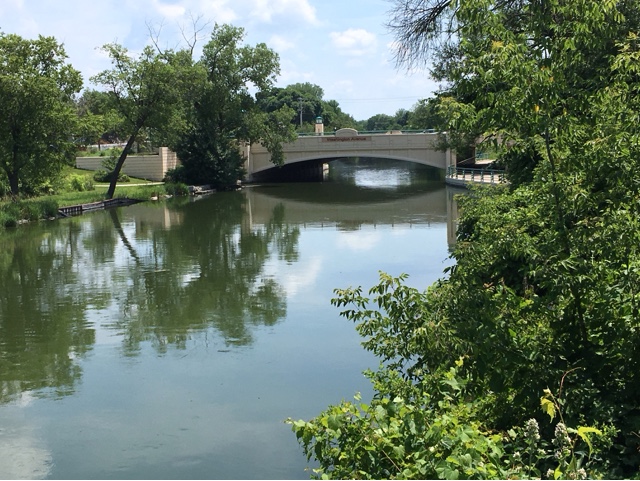 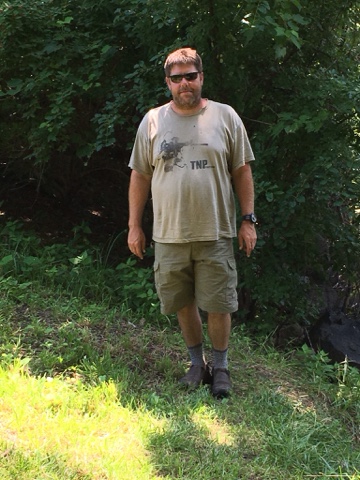 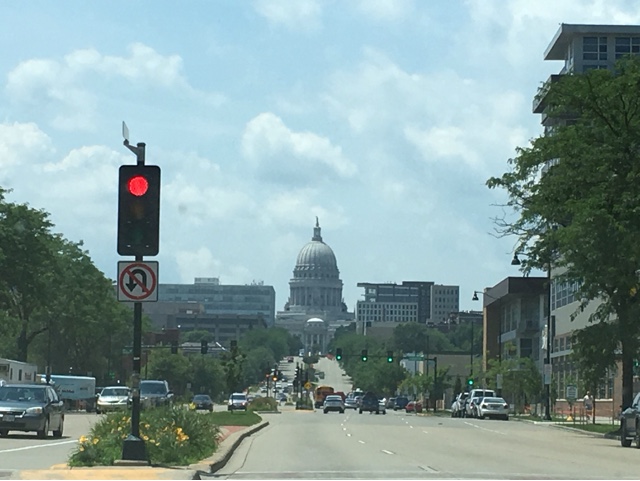 The Capital from East Washington Ave

Saturday, July 8.  Thursday was my day to go to Monona for a visit with Tom and Karen for a few hours - and a great visit it was!  When I left there, I was going to drive past Mom and Dad’s house but was kind of pulled toward Monona Bait and Tackle for a Babcock Hall Ice cream cone before I did it. Yum! Yum! And while I was sitting there enjoying my ice cream cone and looking out at the lake, I called to see if Louie was home. She and Dave and just got home, so I stopped to chat with them for a while before heading back to Stoughton. 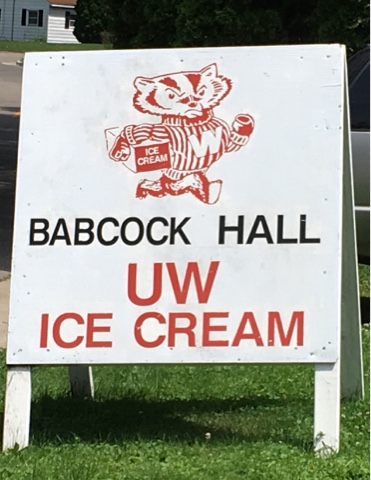 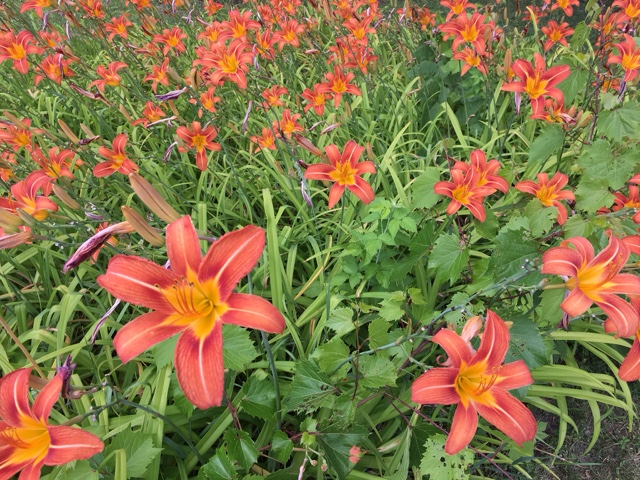 Pat and I went to a few garage sales on Friday morning and I bought a booster car seat for the days that Charlotte hangs out with me, a few cute outfits for the kids, and a replacement microwave for my apartment (the existing one is old and the clock/timer doesn't work).  I also picked up some groceries for a salad to take to Kate and Adam’s party on Saturday.

I just couldn't miss out on a good old Wisconsin Friday night fish fry and an opportunity for a great Old Fashioned, so I met up with Pat and Roger and Gary and Susie at the Owl’s Nest in Poynette, a good halfway mark for all of us.  I ordered the walleye and it was so worth the extra money.  The company and conversation was great too!

A party was held at East Side Park today to celebrate the marriage of Kate (my cousin, Dawn’s youngest daughter) and Adam that took place last October in Antigua and the birth of their son, Henry in March.  I got to see lots of cousins and their families all in one place, drank some great home brewed beer - a Krolsch, a brown, and an IPA (not my favorite), and had lots of good summery picnic foods.  The day was beautiful, mid 70s with low humidity - just a perfect day to hang out in a park.  Oh, and it was a park that I played in as a child - just a few blocks from our home. Back then, it had a splash pool to help you keep cool in the summer and I also remember doing arts and crafts there as part of a summer program.

So tonight, as I was feeding Frisco, I added a bit of leftover walleye to his dog food, left the remaining chunk on the counter and went to my car to get something.  I went to put the container back in the fridge and realized it was empty. The little sh!? ate the Walleye that I was going to share with Pat at dinner tonight.

We took a drive to Gibbs Lake tonight so Pat could check it out to see if it's a spot that he could launch his kayak and fish.  It was only about 12 miles from here along beautiful  rural roads framed with tall stalks of corn. It's a beautiful park and the lake looks clear and nice.  We walked around a little but I had in flip flops and it was the time of day that the mosquitoes were starting to attack. 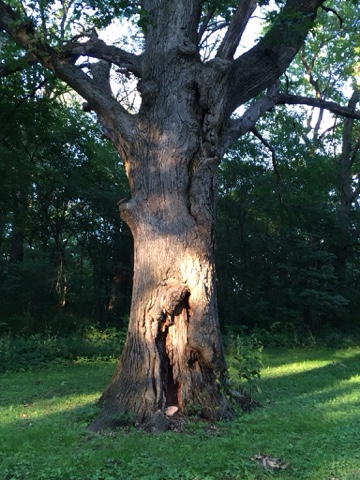 Sunday, June 9.  My last day in Stoughton for this trip.  Pat went fishing early this morning, so I slept in and had my coffee in the trailer.  The temps were nice last night, so I was able to turn off the AC and sleep with the windows open - it was so nice that I slept through the whole night.

It was still comfortable for my walk with Frisco and I did the circle along the farmstead on the southern border of Stoughton, then around the cemetery and back home - quiet, peaceful, and green, green green.

I gave the camper a good cleanup since it will be going back in storage when I get back to Minneapolis.  A thorough cleaning took me about 40 minutes - I love it!

I wanted to treat Pat and Tracey to a dinner of their choice and Smoky Jon’s BBQ won out. We placed our order and then Pat and I drove to Madison to pick it up - the ribs and brisket was just as good as I remembered - what a treat.

I'm settled in for tonight as the Stoughton Junior Fair’s annual fireworks will be starting shortly and I know that Frisco isn't going to like it, otherwise I would be sitting in the front yard watching them.

Posted by Bridge Coast to Coast Saga at 3:17 PM