Monday, July 10.  What a way to start a new week!  First, the fireworks started around 9:15 and went on until shortly after 10:00 - that had Frisco barking and growling and shaking.  Then after a struggle to get to sleep, I start to hear rain, thunder and lightening around 12:30 - several severe weather alarms go off on my phone, warning of flash flood, frequent and severe lightening, and possible hail - and that continues for a couple of hours and then it lessens but keeps on until 5:30.  That was the time I had my alarm set for, so I could get up and have some coffee with Pat and get a farewell hug to last until we see each other again in a few weeks.  The storms have moved on, we ended up with ove 4 inches of rain, and I shouldn't be bothered with them on my drive north to St. Germain.

I stopped at the Pioneer in Westfield, about an hour north of Stoughton, to have breakfast with my cousin, Jo and Patty. So great to see them both. And then I traveled on to St Germain to Jim and Sue’s house. It's such a nice drive with a mix of pine and hardwood forest, and lakes and rivers everywhere you look.  On my arrival, we all had a glass (maybe 2) of Tribute’s Ghost Lights Amber Beer from the nearby brewery in Eagle River. Mmmmm good!

We had a lovely dinner, went for a walk, and then played 3 rounds of Farkel with each of us winning a game.  Nice!

Tuesday, July 11. Jim had some projects to work on this morning, so Sue and I and Frisco walked the 2.2 mile trail around Shannon Lake.  We got a good scare when we stopped at a little beach area and heard the thundering of feet coming along the path.  Sue immediately thought it was a bear and let out a shout, I turned around and saw a large Collie bounding toward us.  He turned out to be very friendly and his master joined him shortly after and there was absolutely not threat, just a nice guy and his nice dog. 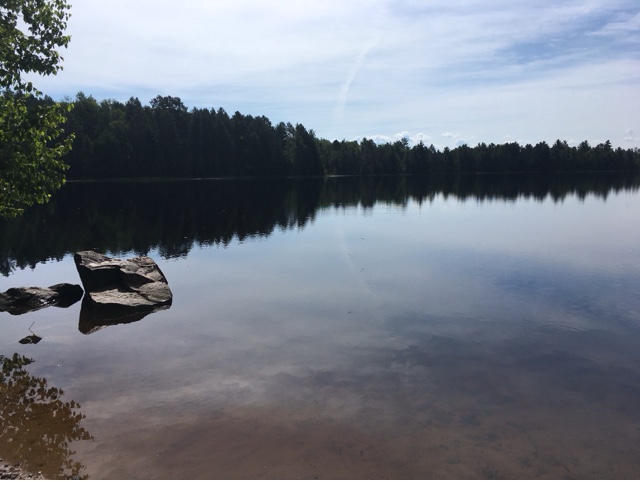 After a bite to eat and cleaning up, we headed to Sayner along State Highway 155 (the shortest highway in Wisconsin, only 14 miles long) and went to the Vilas County museum and a couple of nice little shops, then back to their house to sit and relax on the porch.

Tonight, we went to Sisters Saloon, a typical up north kind of bar, but with a twist.  The food was gourmet and I ordered an almond crusted Walleye that was served with rice and a tasty side of vegetables.  When we got back home, we played Farkel again because each of us won a game last night and Jim was the lucky one tonight - he won all three games - and he got 2 sets of triplets that scored him 2500 points each time - what a streak of luck that was!

Wednesday, July 12.  I was on the road this morning st about 9:30 after having coffee with Jim and Sue and walking to the end of their road and back.  I had checked online for a place to stop to empty my tanks and learned that the sewage treatment plant in Woodruff had a dump station. I pulled in, paid my $10.00 and was led to the dump station by a staff member.  After she left, I realized it was not very sanitary - dirty water from previous dumps was pooled near the outlet, the lid was broken, so nothing to hold your hoses down, and the available rinse water was not very conveniently located, far enough away, so the outlet itself couldn't be rinsed.  I used it anyway - thankful that I had gloves and I was very careful to rinse well. For any RVer friends who need a dump station up north - don't go there.

I headed west on Hwy 70 toward Spooner and drove through the Chequamagon and Nicollet National Forests - about 110 miles of forest.  When I got to Spooner, I went to the Wisconsin Canoe Heritage Museum where there is a collection of some of Tom MacKenzie’s canoes.  I was able to take Frisco in there with me so I could take my time.  The very first exhibit was one of Tom’s early birchbark canoes - I thought it might be the one that he built for Mike but learned from Karen that it isn't that one.  There are some beauties in there. 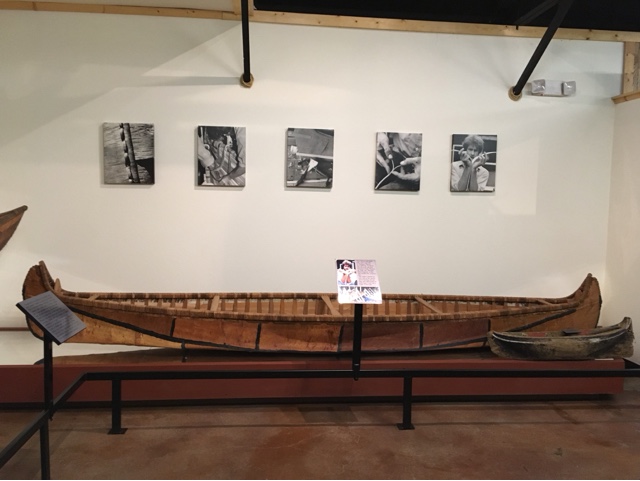 And then there is an entire room, dedicated to Tom and his works - complete with his personal boat and several others, including one that demonstrates the different layers of materials that make them up.  I was filled with emotion and got all teared up seeing the photos and videos, and hearing him in videos that demonstrate the building process and various paddling techniques.  He was a good guy - such a gentle and talented man. I'm so glad to have been a friend. 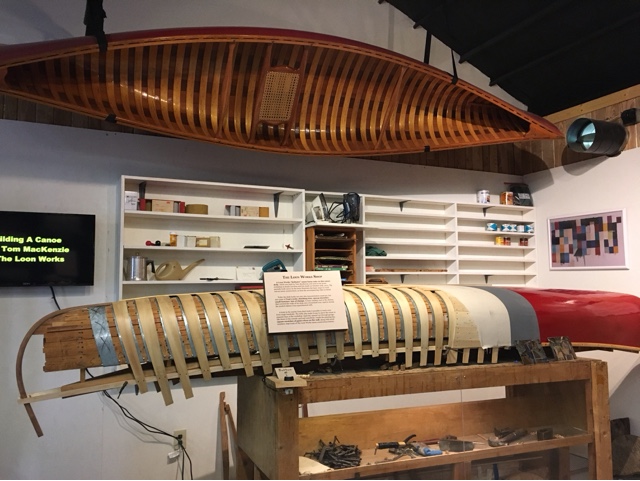 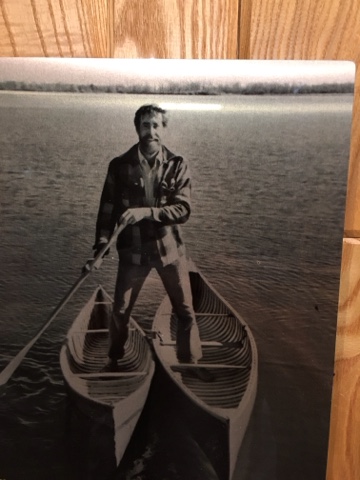 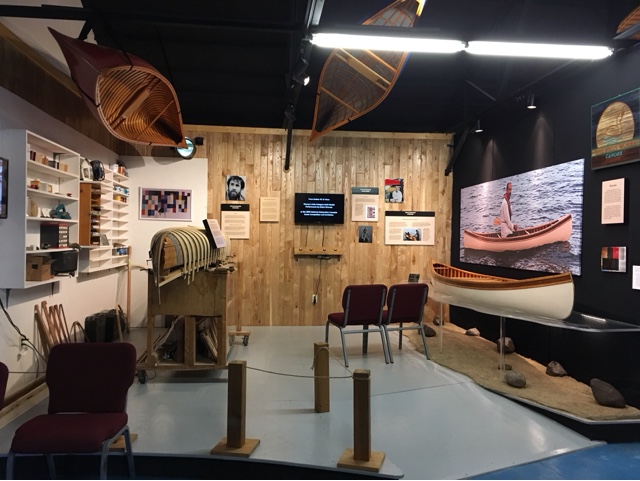 Posted by Bridge Coast to Coast Saga at 4:23 AM