Monday, May 14. Our only activity planned for the day was to visit Artesia, a community about 12 miles to the north.  Folks told us to check out the Main Street where there are several giant bronze statues, so that is what we did, starting with breakfast at the Chaos Cafe.  The coffee was a bit weak and my pancakes were served under-cooked - the first fork full was still batter and I had them sent back and Tom was almost done with his breakfast before I even started on mine.  They were pretty good though, full of yummy blueberries. 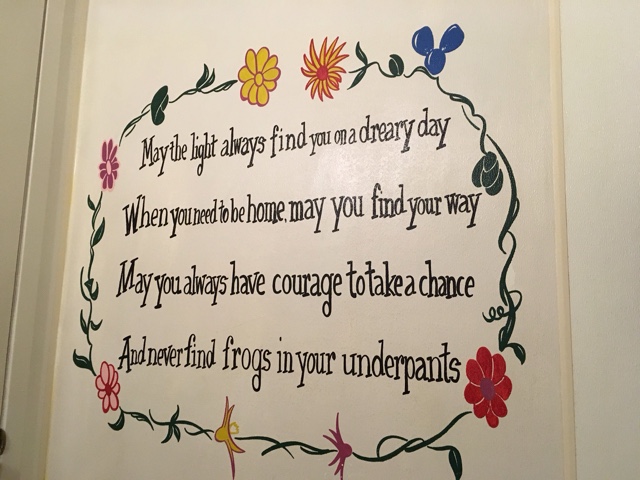 We strolled about 4 blocks of Main Street and read about the various statues depicting early settlers, the cattle drives, railroads, the artesian springs (ruined by the oil industry), and the oil industry.  There was also a nice little courtyard built in the space where a building that burned to the ground once stood, complete with shade trees, murals, water fountains and pools - all constructed from nice, colorful tiles. 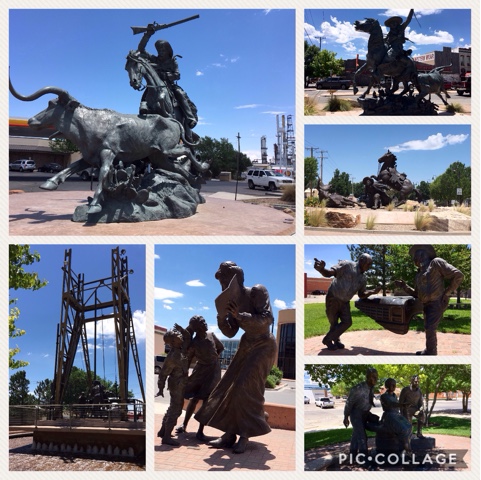 We had planned to go to Carlsbad Caverns at sunset to see the bats leave the caverns but nixed that idea because we didn't feel like driving the fifty miles there and back again. Neither of us were that interested in seeing the caves.

Tuesday, May 15. Travel day. I was up early to allow enough time to take care of getting the inside of the trailer ready for travel, walking Frisco, having enough down time with coffee, and being ready to roll by 10:00.  Tom takes care of all of the outside chores.  We were chatting with some folks who stopped by last night, about our destination, and they strongly suggested we take an alternate route, other than US 285 road south to Pecos.  They said the road is very heavily traveled by huge tanker trucks hauling fuel and it was pitted and rough. Many accidents have happened along the stretch and they highly recommended we alter our plans.  We were thankful for the advise and took it serious, going out of our way by 30-40 miles.  The total drive was 330 miles, a bit much for our likes and we pulled into the rather dumpy Study Butte RV Park at about 6:30 (Central Time Zone) for the next few days.  It is the closest RV Park to Big Bend National Park and it doesn't look much different from the others we have seen - and there also are few options. 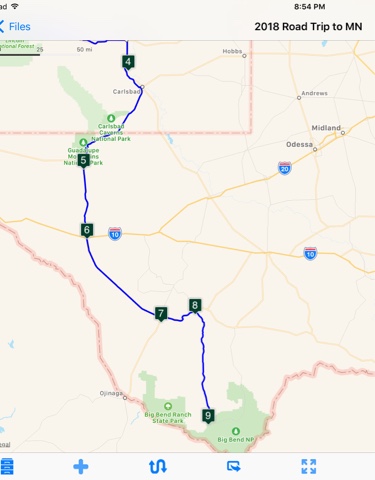 The roads that we traveled were nice, very lightly traveled, and the scenery was very easy on the eyes.

Wednesday, May 15. Today, we toured Big Bend National Park.  It was a hot one, peaking out at about 106 degrees but we did do a short hike and a large auto tour.  We started out by driving the 26 miles to The Panther Junction Visitor's Center where we checked out the small museum and talked with a friendly guy from Houston - he was definitely in the mood for giving his advice, making suggestions, and talking up Texas.

We headed out to the Ross Maxwell Scenic Drive that heads to the southeast to the Santa Elena Canyon Overlook, where the canyon walls separate and the Rio Grande River flows between the United States and Mexico.  We stopped at several places along the way to enjoy the viewpoints.

From my perspective, my first visit here back in 2009 had me thinking that the area was spectacular, after all, it was the first time that I had seen anything quite like it and it was hard to even imagine a place like this - a midwestern girl that knew green for as far as the eye could see.  A mountain was Timm's Hill in Wisconsin, about 1200 feet.  Today, after living in Arizona and traveling through New Mexico, it was more desert and more incredible rock formations, but I didn't really feel the excitement that I did the first time.

One stop resulted in about a half-mile hike into the Burro Mesa Pourout. We were glad that we hiked it because the views there were spectacular.  The trail led to an area of cliff walls that were formed from water pouring down them. Way at the top, maybe 100 feet straight up, you could visualize the water pouring over the cliff, dropping down to a small pool and dumping from there down a smooth volcanic rock wall. I sat at the base and tried to get a photo and it was difficult to get down low enough to see the sky above it. These photos don't do it justice. 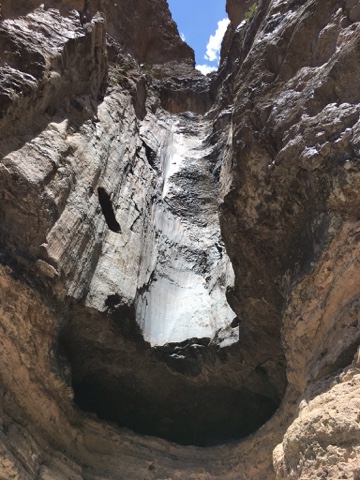 The Santa Elena Canyon could be seen from far away, we both thought it looked like a bite was taken out of the top of the Mesa.  As we got closer, the bite appeared bigger, and we ended up at the canyon where the water flowed through.  We took a path that led to the river and were a bit disappointed that the water was so low, so we followed another and walked the dry bed so we could get our feet or hands wet in the Rio Grande.  It was insignificant and we imagined how it must have been a MIGHTY river in its early days 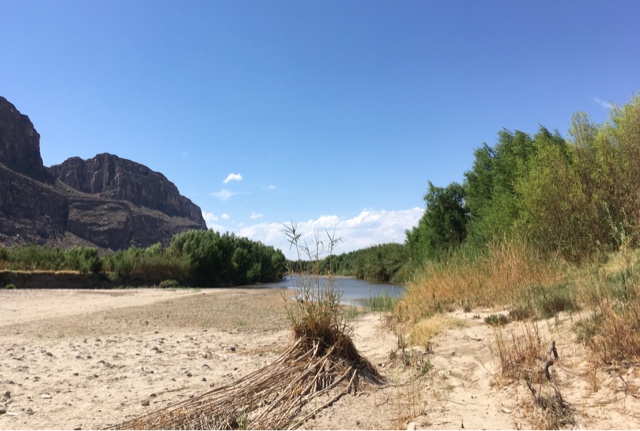 The drive back to the main highway was along the Old Maverick Trail, an unimproved of road that was pretty rough but we traveled along slowly and saw some different sights along the way.  Luna's Jacal was the homestead of Gilberto Luna, where he raised his large family was raised in a very low-roofed, stone shelter and his crops were grown and watered from the nearby Terlingua Creek. 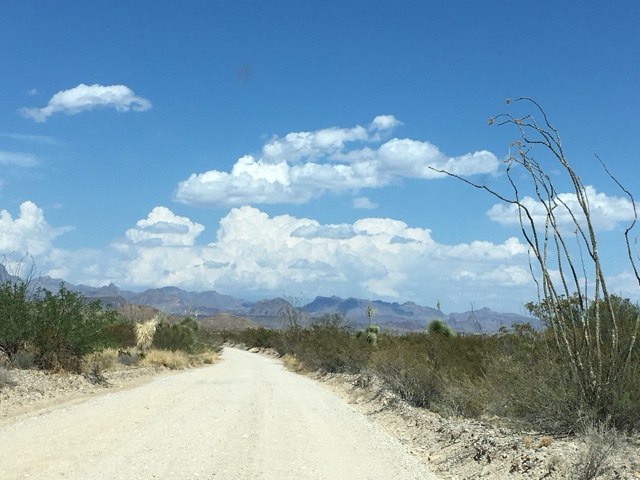 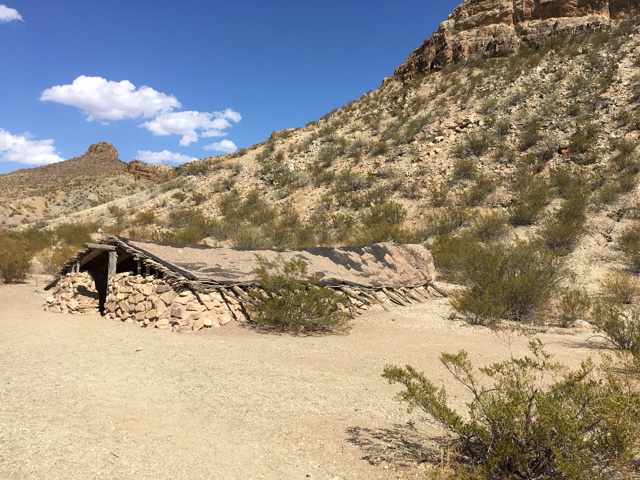 Saturday, May 19.  After a rather minor disagreement Wednesday night, I spent the night tossing and turning and during that time, I decided to pack up my car in the morning and head north on my own.  Since then, wondering if it was the right thing to do and if I will forever regret it.  My struggle is personal - being single for the last 5 years, I am finding the stress involved in making the relationship work is more than I can handle right now.  My heart is feeling heavy now and I have a lot of decisions to make.

I made a stop in Midland, TX and paid $198 for a room at the La Quinta (price gouging at its worst, for the many oil workers in the area), then west of Oklahoma City at a KOA cabin for $45 (much more to my liking) and then on to Springfield, MO to my brother, Randy's home.

Posted by Bridge Coast to Coast Saga at 8:21 AM